“I don’t know what Kendall Mode is, but I am wearing his hat right now. And I am in it,” said the Emmy-winning actor, having come straight from shooting Season 4 of the acclaimed HBO drama to the 2022 Telluride Film Festival. “It’s great to be here and sort of come up for air for a minute.”

Strong is in Colorado for the North American premiere of his new film “Armageddon Time,” a film written and directed by James Gray that’s a very different family drama from the hit TV show he’s on. The story centers on a young Jewish boy played by Banks Repeta, who is coming of age in Queens in the year 1980 (right as Ronald Reagan is about to become President), with Strong playing his moody plumber father, Irving, a man who is, for better or worse, a product of his time.

“This role was a role I was very frightened of and drawn to at the same time, which is what you’re looking for,” said the actor. “This man is trying to do the best he can as a father, and in a lot of ways is not equipped to do that well. He’s trying to toughen up his kids and prepare them for an unfair world, so that they can survive in it, and there are misguided ways that he does that. But I think there’s a lot of tenderness and love there, as well as cruelty.” He added that, when determining if a role is right for him, “one of the first questions I ask, not intellectually but feelingly you try and sense out if a character is in trouble somehow, and the more trouble a character is in, the more there is for you to work with.”

With “Armageddon Time” being “James’s most personal film,” and Irving being based on the filmmaker’s real father, an enthusiastic Strong got as close to Gray as possible to find who exactly the character is. “I was living in Denmark when he asked me to do the film, and so I got on a plane and tracked him down, tracked his family down, met people, asked a million questions,” said the actor. “I remember giving James the Proust questionnaire and having him answer the questions as if he were his father. . . I was relentless in terms of the way I pried James for details and stories and jokes and songs, and finding out little things his father loved.”

Strong’s seemingly overwhelming approach to acting has been much discussed, but he does have a way of explaining the practicality behind doing all the work he does in advance of production. “Most of acting is about preparation, so that if you are armed with a visceral understanding of this character, you can get to set and essentially just play and be in the moment. And I’d say or do anything formed by that understanding.” He does ask himself “How far do you go? And what length do you go out on?” as part of the challenge of characterization, “but there’s infinite ways really to play any part. So you have to discover what feels necessary.”

“I don’t know [Irving] the way James knows him. So I had to put that together for myself until it felt inevitable. This is who he is,” said Strong. “So that was a lot of work to do, and a lot of blind intuition, and a lot of research and trying to absorb as much as I can from James about the source and about his experiences, but also being very specific about rendering a certain man from Queens in 1980, which is not me.”

The result sounds not dissimilar to Gray himself — Strong really nails the same Queens-born affect — but the actor sees Irving as more of a composite of things, including his own Jewish grandfather who lived in the same New York City borough. He mentions that Gray refers to the film as a ghost story. “It is in search of a past. We’re covering that past and distilling that past. And so that becomes a journey for you as an actor, both searching for James’s past, but also your own, and then trying to express that as purely as possible.”

There are many reasons Strong excels in “Armageddon Time,” not the least of which is how he has already been primed to do that blending of fact and fiction. Reflecting on “Succession” again, the actor said, “The truth is it’s something that I’ve worked on for almost six years now. And sometimes [Kendall] feels indistinguishable from me, I guess.” However, that isn’t something he feels bad about. Inspired by a Matisse exhibit at MoMA called The Red Studio, which had a curatorial statement about the incredible entanglement between painting and real life, Strong said, “That entanglement is a really important and vital place where elements of yourself and elements of your work fuse. It’s impossible to delineate where one ends and where the other begins.” 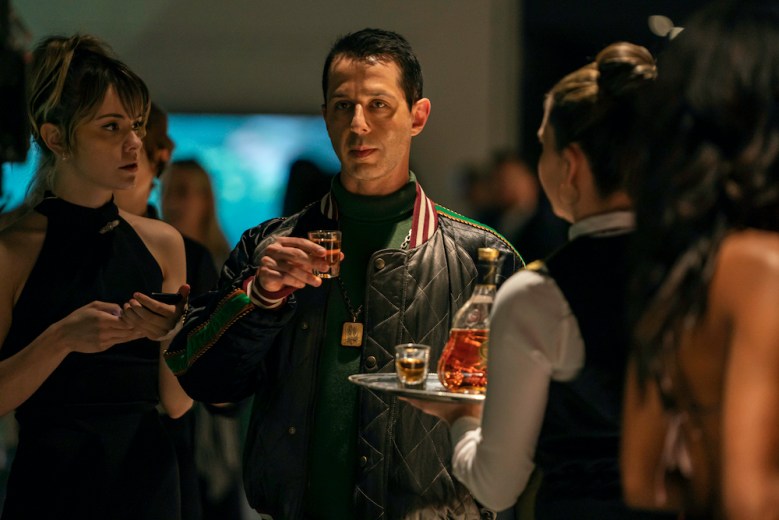 At the same time, the actor is coming to terms with how Kendall Roy affects his perception of his professional trajectory. “It’s something I’ll probably carry around with me from now on,” said Strong. “The show has become sort of iconic in a way. [Though] Kendall, for me, is just another part that I play.”

“This was a real high dive for me, which is what I want. But not everything is a high dive, especially now,” said Strong. “So this was a real gift to get to do that for James.”