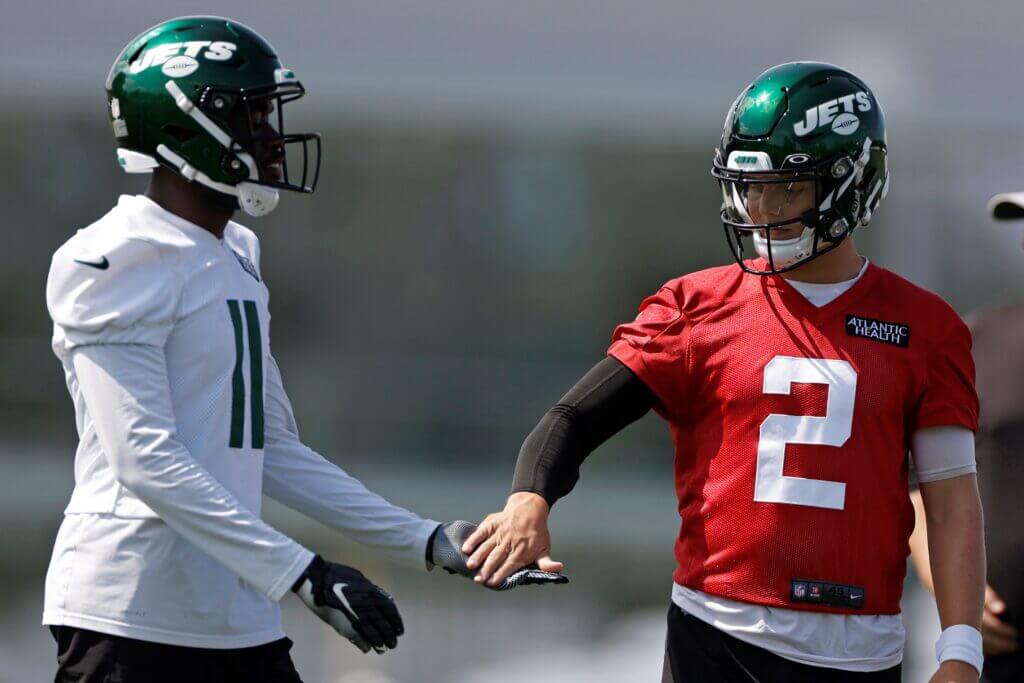 FLORHAM PARK, NJ — Denzel Mims walked up to the lectern after Friday’s practice and wondered aloud why a reporter left his phone there. Someone laughs and told him it’s recording his news conference. Mims didn’t laugh.

When Mims spoke, the first time he’s met with the media in training camp, he was stoic, matter-of-fact. No wasted words. He believed everything he said, like he still believes in himself — even with the overwhelming signs that the Jets don’t exactly believe in him anymore. Everything the Jets have done since last season indicates they’re planning for life without him. When Mims walks into the wide receiver room these days, he sees a $37.5 million receiver (Corey Davis), a second-round pick (Elijah Moore) and a first-round pick (Garrett Wilson). Braxton Berris signed a two-year, $12 million deal this offseason, and he’s locked into a role on both offense and special teams.

Before Mims even practiced for the first time this summer, healthy as he’s been since getting drafted in 2020, the best he could hope for was a role as the Jets’ fifth receiver — and even that feels dubious since Jeff Smith has been a standout since the spring.

But Mims, who has gotten more reps in team drills with Mike White than Zach Wilson or Joe Flacco, doesn’t see it that way.

Mims wants to be at the top of the totem pole, not the bottom — and he feels he deserves that, too.

“I see myself on top,” Mims said. “I feel like I’ve put in enough work to be there. That’s a coach’s decision. But I’m going to continue to work my tail off and do everything I can.”

What does “on top” of this talented receiver room mean?

“Starting receiver. That’s the goal,” Mims said. “I’ll do anything and everything I can.”

Pressed further, Mims continued: “I show it every day, so it’s up to them if they want to play me or not. But I show every day what I can do. I’m going to continue to do that.”
To Mims’ credit, there’s been nothing but positive reviews about his performance through eight practices, even if he’s not getting as many reps as Smith and the others ahead of him on the depth chart. He had an impressive catch-and-run 60-yard touchdown on a pass from White on Tuesday, and he’s been getting in work with the special teams unit, too.

Robert Saleh said Mims is “doing a really good job” and pointed to his “fighting his tail off in the run game” and how he’s “battling” on special teams. Saleh also emphasized that Mims is in better shape — last year, Mims last 20 pounds as he battled food poisoning, which impacted his ability to practice and get into shape. As a rookie, Mims battled hamstring injuries in camp.

“I wasn’t able to be myself last year,” Mims said.

“Because he’s so well conditioned right now he’s doing things with his body from a route running standpoint that he hasn’t done, that he hasn’t been able to do in the past,” Saleh said. “We’re happy with the approach he’s taken this offseason, the way he attacked OTAs, the way he’s come into training camp, where he is mentally, the coaching that he’s accepting. He doesn’t make excuses, he’s grinding. He’s approaching it like a professional.”

Last season, Mims fell so far behind that he became an afterthought on offense. He finished his second season with eight catches for 133 yards — and he still hasn’t scored a touchdown through two seasons.

Now, there’s a real possibility these next few weeks are his last in a Jets uniform. He’s tuning out the noise.

Here are some non-Mims observations from Friday’s practice, which featured a skirmish and another rough day for the Jets offense:

DJ Reed and Sauce Gardner, chatting and warming up before practice #Jets pic.twitter.com/89UXHF8VEb

After a couple positive practices in a row, it was a letdown day for the Jets offense on Friday. Zach Wilson’s first pass attempt in team drills couldn’t have gone much worse. He was almost immediately “sacked” upon dropping back by — take your pick — Carl Lawson and/or Jonathan Franklin-Myers, who beat left tackle George Fant and right tackle Mekhi Becton, respectively. Since plays aren’t being called dead in camp, Wilson still threw the ball downfield to Smith, in double coverage, on a pass that was easily picked off by cornerback Bryce Hall.

Zach Wilson bounced back for the rest of that session, completing his next four passes in a row to Michael Carter, Breece Hall, Tyler Conklin and Garrett Wilson. The pass to Hall was nicely caught on a slant route. On the next play, Zach Wilson was sacked by rookie defensive end Jermaine Johnson.

For Wilson’s next drive he was pressured by Bryce Huff and attempted an off-balance throw down the field that wasn’t near anyone in particular. Lawson pressured Wilson on his next pass, causing him to badly miss an open Elijah Moore deep. He closed it out with two completions, including one to Carter, but was pressured on the last one, too, this time by linebacker Quincy Williams. In this stretch, the Jets were working on third-and-long situations so the pressures were a combination of bad blocking and/or Wilson perhaps holding onto the ball a little too long.

On the final, unscripted, move-the-ball possession, Wilson was first sacked by Franklin-Myers, then completed a pass down the field to Carter, two short passes to Garrett Wilson and Berrios, and then his last past went through Smith’s hands. Another day, another failed drive to end practice.

All told, I had Wilson completing 9 of 12 passes, a solid day overall that would’ve been better if he had a little bit more time to operate.

Some players had to be separated when the third-team offense and defense were facing off late in practice, though it was difficult to see from the media viewing angle who was involved. No punches were thrown, which is Saleh’s No. 1 rule.

Both rookie tight end Jeremy Ruckert and running back Tevin Coleman returned to practice and participated in team drills for the first time since being activated. Coleman got more reps, as it seems the Jets plan to ease Ruckert back into the fold slowly.

Left tackle George Fant (knee) got his most reps in team drills of camp so far, though Saleh said he’s still working his way back into shape.

Both Hall and Carter have gotten most of the attention in camp at running back, and deservedly so. But undrafted rookie Zonovan Knight has also stood out in his reps running with White at quarterback.

“You saw Zonovan break one there,” Saleh said. “He’s having a nice camp.”

Carter and Hall are locked into roster spots at running back. The rest of the depth chart is up for grabs, though Coleman, as a veteran, feels like a safe bet to stick around, getting pushed by Johnson (when healthy).

The forgotten man: La’Michal Perine, who might be on his last legs with the Jets. Saleh insists he’s in the mix.

The veteran backup quarterback was having a stellar camp, but had his first bad day on Friday. He threw back-to-back interceptions in team drills, including one into traffic that safety Will Parks impressively secured diving toward the sideline. Linebacker Hamsah Nasirildeen had the second one.

Flacco did bounce back to lead the second-team offense down the field at the end of practice — which the first-team offense failed to do — and connected on a couple of nice deep balls, one at the sideline to Tarik Black, another in the end zone on an impressive diving catch from Calvin Jackson.

• Becton wore a brace on his left knee during Friday’s practice, the first time he’d done that in camp — though it’s nothing to be worried about. His trainer tweeted that Becton will likely wear that in games, and Saleh called it a “comfort” thing. “Trying to create a little more comfort for him,” he said. “The guy is grinding his butt off. The knee is stable. There’s obviously discomfort he’s dealing with but at the same time he’s doing a really nice job.”

• Berrios died his hair blonde for training camp, and now his teammates are calling comparing him to Eminem, calling him “Slim.” He’s OK with it. “I wanted something different. It was a like fun camp thing at first but I actually grew to like it and I think I’m going to keep it.”