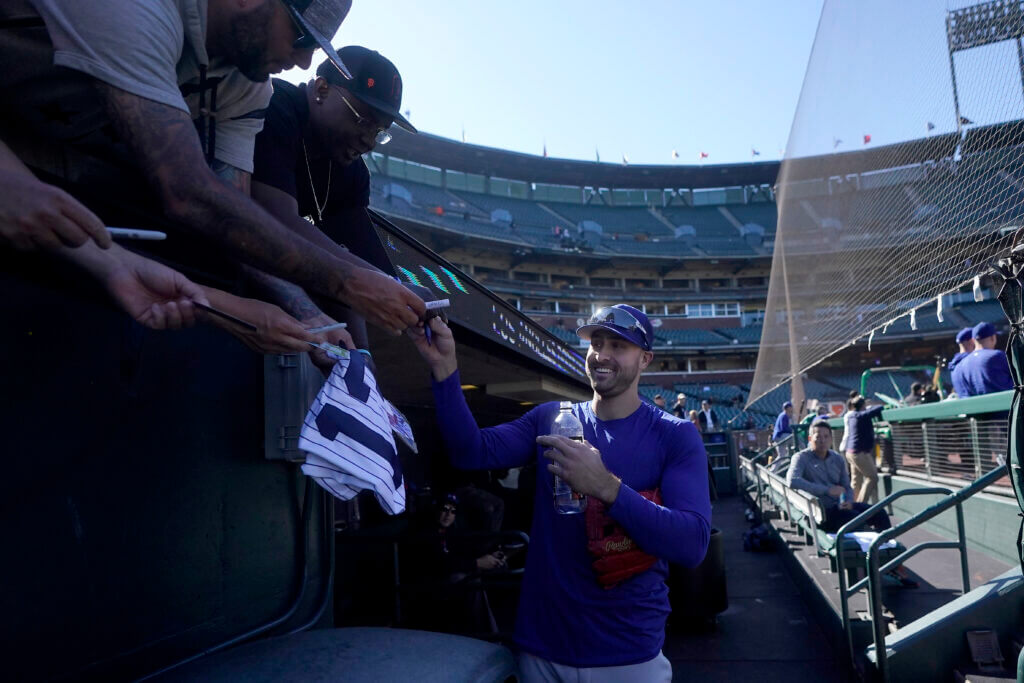 SAN FRANCISCO — Joey Gallo knew his time in New York was ending just a little more than a year after it began with such promise.

So Gallo slunk into the periphery. In the week before he finally was traded Tuesday, Gallo received just four at-bats. He struck out in all four. The 28-year-old pondered his next landing spot. He stopped shaving, knowing that wherever he’d landed, he would no longer be subjected to the grooming policies of the Yankees organization.

“Cheated a bit,” Gallo joked as he plopped down in the visitor’s dugout at Oracle Park on Wednesday. What had been a shadow of a beard looked fuller. “I had a good idea that I was getting moved. I was ready with the beard.”

The Dodgers traded for Gallo at a diminished cost compared to the haul the Yankees paid at last year’s deadline. The Dodgers hope he can rediscover the thunder in his bat. He arrives with an uncertain role and future, as he is just months from free agency yet far from the payday he was set to receive.

“The true talent level remains,” Dodgers president of baseball operations Andrew Friedman said after Tuesday’s deadline. “We feel like getting him here, getting him with our guys, there’s a real compelling upside story.”

He is out of New York, where those swoons felt more lasting. After emerging as a star in the relative anonymity of playing for the Rangers, he arrived in pinstripes and, by his own admission, pressed for immediate results to justify his presence on a talent-filled roster.

Gallo’s skill set is an odd one, one that feels extreme even within the context of the modern game. Few players can generate as much power while maintaining a discerning eye for the strike zone. The existential question at the heart of Gallo’s profile has centered on him making enough, and the right amount, of contact to put his wonky stat line into the right balance.

“I’m a strange player, a unique player I guess,” Gallo said. “But a player that can help a team win. I know that.”

At his best, Gallo profiled as an above-average hitter who bordered on elite despite his unorthodox splits. He paired that with strong defense to become a valuable multiple-time All-Star and put together 40-homer seasons in 2017 and 2018. He has a pair of Gold Glove Awards, as well, vouching for his defensive acumen.

He never became that player with the Yankees. He posted just a .660 OPS in the 12 months after arriving in the Bronx. His power dwindled as his mechanics fell out of sync in an attempt to compensate. Gradually, then quickly, his playing time dissipated and so did the opportunities to correct things.

It put him on the outside looking in. Even as the Yankees stormed to the American League’s best record, the scrutiny focused on Gallo. The mashing outfielder had started to feel some signs of a turnaround that came “a little too late” to change what was certain, that his exit was coming. Gallo was booed regularly. He told NJ.com he wouldn’t even leave his Manhattan apartment to avoid potential criticism.

“It’s something I’m gonna have to really live with for the rest of my life,” Gallo told The Athletic’s Lindsey Adler recently of his time in New York. “It’s going to be tough. I didn’t play well, I didn’t live up to expectations. And that’s a tough pill to swallow.”

Gallo’s phone buzzed Tuesday morning, signaling the expected resolution. The Dodgers had pursued left-handed-hitting outfielders throughout the deadline period, with targets that ranged from 23-year-old superstar Juan Soto (who went to San Diego) to David Peralta (who went to Tampa Bay) to Ian Happ (who stayed in Chicago) before placing a wager on rekindling Gallo’s upside.

The Dodgers’ lack of production from some of their former MVP-level talents pushed them to pursue another. Max Muncy’s slow start after suffering a torn ulnar collateral ligament in his non-throwing elbow has turned into a down year. Cody Bellinger hasn’t been the same player since undergoing major shoulder surgery after the 2020 season. And though Jake Lamb and Trayce Thompson created a functional platoon, the Dodgers traded Lamb to Seattle, seeing Gallo as a higher-upside option at the plate and in the field.

So Gallo landed in Los Angeles, hopeful for a reset. It’s a message Dodgers manager Dave Roberts emphasized in a 30-minute conversation in the visiting manager’s office once Gallo arrived after his cross-country flight Wednesday.

“(The) mind helps the performance. So my hope, our hope, is that having a fresh start, having clarity, being open to the Dodgers will tap into that talent that he does have and prove for performance,” Roberts said. “There’s certainly an exhale and joy to be out of New York, nothing against the Yankees.”

Gallo is now reunited with Hanser Alberto, his teammate for years with Texas. Same with left-hander Andrew Heaney, who also arrived in New York at last season’s deadline only to struggle before getting off to a good start in his brief time with the Dodgers. Gallo built a friendship over the offseasons with infielder Gavin Lux. And for years, Gallo and Bellinger, both Scott Boras clients, have spent winters training together. Gallo and Bellinger have often played video games against each other, too, engaging in Fortnite and Call of Duty contests regularly.

In the weeks leading up to the deadline, Gallo had even jokingly texted Bellinger, asking Bellinger to start playing video games more regularly again.

But his text Tuesday morning was about something different.

“LA?” it read. After years of joking, they were teammates.

“It’s in there,” Bellinger said of Gallo’s talents. “It’s not gone, and that’s the most important thing. … The light bulb’s always on up there. There’s just probably a lot of clutter around it.”

Getting an opportunity to ease his way into a new environment will perhaps allow some of that clutter to clear. Gallo didn’t play Wednesday and conceded that perhaps he needed a fresh start, away from New York. He did not speak like a man haunted by his struggles during the past year that he equated to being close to rock bottom. Upon leaving the scrum of reporters, Gallo signed autographs for a group of fans, including one flashing his No. 13 Yankees jersey in front of his face. Previously, as he went through the home clubhouse at Yankee Stadium collecting his things, some of his now ex-teammates joked about hiding proprietary information should the two first-place clubs square off in October.

“I wish I had played better (in New York),” Gallo said. “You never want to play bad no matter where you are. But I’m excited for a new fresh restart. Obviously, I want to get back to being a threat at the plate again and doing damage. But I think I learned a lot about myself in growing through those struggles. I want to be a good hitter, though. I definitely need to hit a little bit better.”

‘The street is where everything unfolds’: Krass Clement’s unseen Belfast – in pictures | Art and design