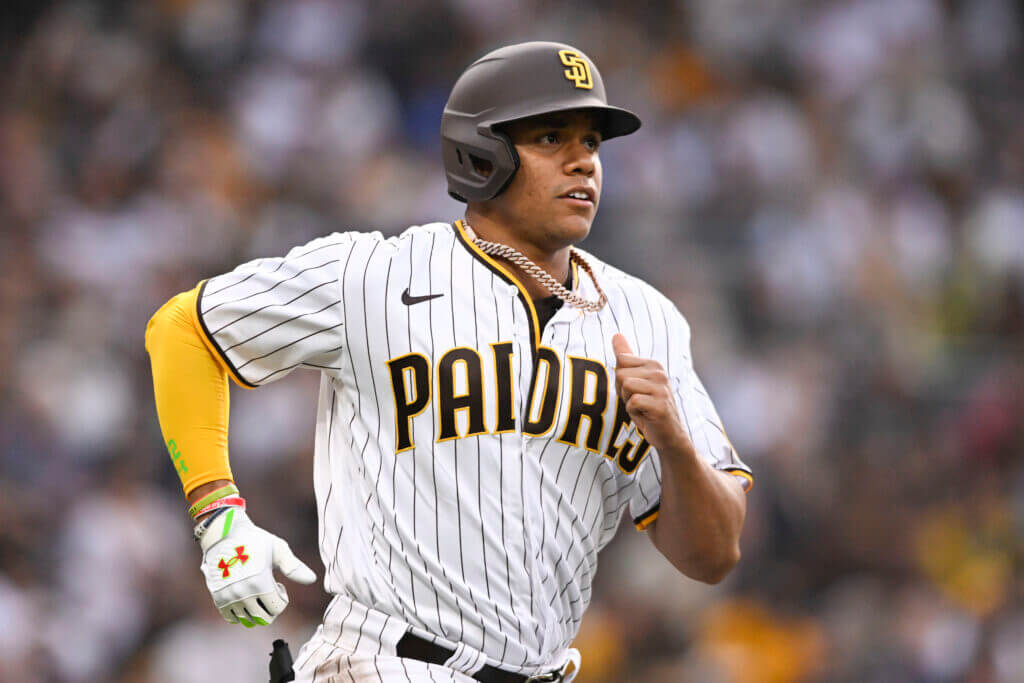 SAN DIEGO — Inside a room overlooking San Diego Bay, in his formal introduction to a city and its lone major sports franchise, Juan Soto alternated between flashing a toothy smile and handling questions with ease. There was little hesitation in his answers. There was no mistaking his place atop a makeshift stage. The seating arrangement placed him only slightly off center.

Josh Bell, the teammate who had accompanied him across the country, sat to Soto’s right. A.J. Preller, the Padres general manager who had landed them both, sat to Soto’s left. Peter Seidler, the owner who had signed off on a league-altering trade, sat on the other side of Preller. Scott Boras, baseball’s most prominent agent, sat facing them in the front row of the audience.

“He’s ‘Star Soto’ in the constellation of players,” said Boras, who represents Soto and Bell. “He’s just different. He’s got a (career) 160 OPS-plus. There are only three or four players that have done that by the age of 23, and all of them are Hall of Famers or to-be Hall of Famers. It’s just a rare, rare talent.”

There was no mention of the third player who joined the Padres on Wednesday, before the team’s most anticipated regular-season game in years — ever, maybe. There was no press conference for Brandon Drury.

As recently as March, there was almost no interest. Drury, the owner of a career 91 OPS+, chose a minor-league offer from the Reds over a minor-league offer from the Angels. He made the big-league club as a reserve. He benefited from injury vacancies and created his own good fortune, wielding a readjusted swing to great effect. He reemerged as an everyday player, playing five positions and leading the rebuilding Reds in most offensive categories.

On Tuesday, the contending Padres capped a seismic wave of activity by trading one of their better remaining prospects, Victor Acosta, for Drury, a rental. The move registered as a tremor, not the earthquake that accompanied Soto and Bell from Washington. About 24 hours later at Petco Park, Soto laughed as he offered a warning to opponents of a dramatically revamped lineup. “I wish good luck to the other pitchers,” he said.

Standing in front of his new locker, Drury struck a softer tone. “Whatever it takes to help the ballclub win games, that’s what I’m here for,” he said.

In Wednesday’s 9-1 victory over the Rockies, all three newcomers contributed to a dismantling. Soto walked twice, padding his major-league lead, and singled in his final at-bat. Bell walked twice, too, and played an effective first base. The former Nationals sandwiched No. 3 hitter Manny Machado, who finished a triple shy of the cycle. For at least one night, the trio proved as tenacious and dangerous as hoped.

Yet it was Drury who supplied the biggest swing. It came on the first pitch he saw, after Jake Cronenworth was hit by a pitch to load the bases. It produced a laser to left-center for a grand slam — the second of Drury’s career, the second of San Diego’s season, and the first ever by a player in his first plate appearance as a Padre.

“I was just running on pure adrenaline,” Drury said. “Really excited to be here, so that was pretty special for me.”

More than 44,000 people could vouch for that sentiment. On a mid-week evening, Petco Park sold out for the 19th time this year. Portions of the crowd stood throughout the bottom of the first, cheering an early explosion from an offense that would have felt like a dream just a few days ago.

“Since I’ve been a Padre,” Cronenworth said, “that was probably the best atmosphere I’ve ever seen.”

The top attractions were obvious. In his first plate appearance, Soto drew one of the more electric four-pitch walks in recent memory. Machado followed with a double, pushing Soto to third base. Bell fell behind in the count, then rallied to draw a seven-pitch walk. Cronenworth took a pitch off his front foot, bringing in the first run.

Up came Drury, serving as the designated hitter. Despite a career-best 126 OPS+, he had arrived with less fanfare than Soto or Bell. He did not mind. He is 29 years old and now with his sixth major-league club.

“I don’t care about all that, to be honest with you,” Drury said afterward. “I just want to play good baseball and have the team win.”

Colorado lefty Chad Kuhl started with a slider on the outer half of the plate. Drury ended the at-bat immediately, pulverizing the pitch with a compact swing. Machado held a fist aloft as he began jogging home from third. In the stands and the home dugout, there was pandemonium.

“It just tells you about the lineup,” Machado said. “I mean, you have no letup through the first six, seven hitters. … You’re just going to have to go out there and make those pitches one through nine, and we’re going to go out there and have the best approach ever against every pitcher and every team. Brandon in that situation took advantage of a pitch with bases loaded — you know, (Kuhl) had to come to (Drury), and he’s been having a tremendous year, so he’s going to continue to do it for us.”

Wednesday’s grand slam brought Drury’s season totals to 21 home runs and 63 RBIs. The bulk of his production has come in Cincinnati’s bandbox, but the Padres saw encouraging splits. Drury joined the team with a 1.016 OPS against lefties and a respectable .794 mark against righties. He will play multiple infield spots and DH. He is again an everyday contributor. He has gone from signing a minor-league deal in consecutive offseasons to being summoned into a playoff chase.

“Looking back on it, it’s pretty wild,” Drury said. “This is the player that I’ve always known I can be.”

“You talk about the other pickups — this one was huge for us, too,” Padres manager Bob Melvin said.

The other pickups were not completely upstaged. Freed from the drudgery of the Nationals’ rebuild, Soto charmed his way through his Padres debut. Before the game, he spoke about his desire to recreate his 2019 World Series experience in San Diego. He lauded the city’s temperate weather. He described his longtime friendship with Fernando Tatis Jr., who could make his season debut within two weeks. He deftly sidestepped a question about his amenability to a contract extension.

“For me, right now, I just came here,” Soto said. “I’m just thinking about winning. I’m just coming to this clubhouse to bring the energy that I have. All the good vibes that I have to bring here is just to win. I’m concentrating on this year, where we are at in the standings against the other teams.”

Unlike his younger teammate, Bell has never reached a postseason. He spent five years in Pittsburgh, then almost two in Washington. His Nationals career came after the franchise’s recent, glorious run. He did get to play then with the likes of Soto and Max Scherzer and Trea Turner. He would like to taste what they did in 2019. Like Drury, he is nearing his 30th birthday and, beyond that, free agency.

“I’m pumped to play on a winning team,” Bell said. “It’s an exciting time, and the time is now for the Padres, so let’s get after it.”

Late Wednesday, the Padres excitedly discussed a memorable atmosphere and their sudden good fortune. There appeared to be more of it on the way.

“It’s exciting,” said Blake Snell, who held the Rockies to one run over six innings. “And you know what’s even more exciting? That Tati’s not even in the lineup and we’re that fun to watch.”

Meanwhile, former Nationals continued to be a popular topic. The day before, the Padres had landed in Soto and Bell in what Preller called “one of the biggest trades in baseball history.” A year earlier, the Padres had sought to acquire a pair of Soto and Bell’s old teammates. The Dodgers, at the last minute, upstaged them.

“Last year, we didn’t get Scherzer and Turner, and that was sad,” Snell said. “We wanted those guys. And then, this year, we got everybody. So, the energy is a complete turnaround from that.”