SAN DIEGO — Before he soared to stardom, Juan Soto learned how to walk.

His true education, according to the outfielder, began in rookie ball. Some evaluators believe it started earlier than that. Either way, the amateur version of Soto was far more cavalier than his professional self.

“Literally, I would swing at everything,” Soto said, laughing.

As a teenager, he demonstrated enough aptitude to receive $1.5 million from the Nationals. As a young adult, he has emerged as the favorite to earn baseball’s first $500 million contract. This week, the Padres surrendered a bounty of prospects to acquire Soto, widely considered the best hitter in the sport. They need the Home Run Derby winner’s fearsome power. They also need his unique ability to change a game without taking a swing.

Last year, Soto led the majors with 145 walks at age 22. Only one player that young has shown more patience: In 1941, Ted Williams drew 147 walks and batted .406. So far, the comparisons have not felt wild. Hitting has never been more difficult, and Soto can make it look second nature.

In 2016, Soto was a kid from Santo Domingo with a knack for barreling the ball — no matter where it was pitched. Jorge Mejia, the then-hitting coach for the Gulf Coast League Nationals, sought to refine the prospect’s decision-making.

“They just tried to make me focus more on one pitch, one spot, and concentrate more in the strike zone,” Soto said. “(Over) the years, I just get better and better at it, and I just get to know the strike zone more and more.”

In time, Soto grew comfortable with letting certain pitches go by. He came to relish the satisfaction of doing something better than his peers across the minor leagues. He collected 29 walks against 28 strikeouts in 2018 before the Nationals called him up as a 19-year-old. He developed a signature move, the Soto Shuffle, finding that it irked some pitchers and intimidated others.

“It’s been a part of my career and everything, the shuffle,” Soto said. “I do it just to play games. I mean, you got to fight the battle, just letting those guys know I won’t give up. Even if I’m down in the count, I won’t give up. So, anytime you see me play, you’re going to see the shuffle coming up.” 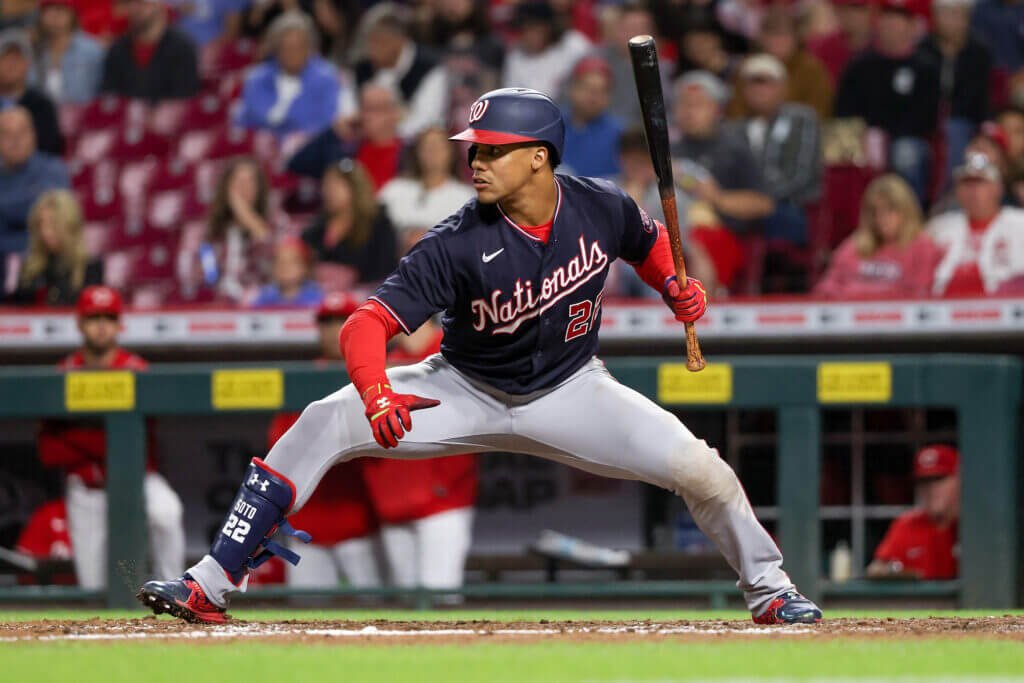 Juan Soto says his trademark shuffle is about letting pitchers know “I won’t give up. Even if I’m down in the count, I won’t give up.” (Dylan Buell / Getty Images)

The Padres had seen him before he started shuffling. They scouted and recruited him in the months leading up to the 2015 international signing period. International scouting director Chris Kemp rated him as the best available prospect. Back then, according to some onlookers, Soto already possessed a keen eye.

“A lot of tryout guys, if they walk, they bitch,” one international scout said. “Juan would take his walks, and it was, like, a good thing. His pitch recognition and ability to hit lefties at a young age, it was remarkable.”

Soto wound up signing with Washington, not San Diego. “Some genius told Chris Kemp we should go after another Cuban prospect as our No. 1 guy,” Padres president of baseball operations A.J. Preller joked Wednesday, referencing his unsuccessful pursuit of Yoán Moncada.

Preller, the league’s most obsessive general manager, remembers virtually every player he has scouted. In January 2019, he stumbled upon new information. Soto, Preller learned, was at Point Loma Nazarene University. The runner-up in the National League of the Year voting had flown to San Diego to hone his swing with Mejia and Nationals hitting coordinator Troy Gingrich.

“I think that kind of always resonated with us,” Preller said. “When we talk about somebody that is extremely talented but is in constant pursuit to be the best in the game … we said if we get a chance to ever acquire somebody like Juan, that’s the type of guy we want in the middle of our lineup and leading our organization.”

This spring — and likely even before that — Padres owner Peter Seidler suggested to people close to him that he could bid for Soto when the outfielder reaches free agency after the 2024 season. On July 16, The Athletic’s Ken Rosenthal reported that Soto was available after rejecting a 15-year, $440 million offer from the Nationals. On July 18, Soto celebrated his Home Run Derby triumph with Mejia, who served as his pitcher and remains his offseason hitting instructor.

On Monday, after a couple of weeks of exploration and discussion, the Padres watched from afar as Soto went 1-for-1 with a home run and three walks in his final game with the Nationals. He saw 22 pitches and swung at four, never chasing outside of the strike zone. Later that night, San Diego closed in on a historic agreement that included Washington first baseman Josh Bell, another hitter with a combination of discipline and power.

Since arriving in Southern California, Soto, Bell and fellow trade acquisition Brandon Drury have changed the complexion of a previously anemic offense. Soto, of course, is the headliner. The Padres are 22nd in the majors in barrel percentage. They are 12th in chase rate.

Since 2020, Soto is 18th among all qualifying hitters in barrel percentage. He has the lowest chase rate of anyone. He is still only 23 years old, and his approach belies his youth.

“You don’t only do it in the game. You got to do it in every spot,” Soto said. “Even when I go to the cage, I try not to swing at bad pitches. I even tell the coaches to throw me a couple pitches for a ball so I can see it and then I start swinging. But I make sure they’re strikes because if I swing at balls, I’m not taking my ‘A’ swing. Every time I go out there, I want to take my ‘A’ swing every time.”

After the game, Manny Machado marveled about hitting behind Soto. The All-Star third baseman had finished a triple shy of the cycle.

“I don’t know how he doesn’t swing at those pitches,” Machado said. “I mean, those pitches are nasty and he’s taking it. It’s pretty fun to watch, standing right behind him in the on-deck circle and seeing how he goes about his business and how he approaches his at-bats. You know, it’s just a small sample size today, and I’m looking forward to being his teammate and seeing him do this for the next couple months and for the next couple years.”

“It just feels amazing, just how good of a lineup we have,” Soto said. “I mean, even when I walk, we can do damage. I’m glad that I’m here and I’m ready to keep doing it.”

On Thursday, the roles were reversed. The Rockies bashed their way to a 7-3 win, ending the Padres’ five-game winning streak. Drury was robbed of a two-run homer. Soto went 2-for-5 with a double and a triple that dropped between miscommunicating outfielders.

Now that the stakes have elevated, now that he has more protection around him, Soto’s season numbers — including a .249/.410/.491 slash line — figure to improve. But they already were trending upward. Soto is hitting .329/.513/.671 since June ended. He has collected 93 walks. No one else in the majors has more than 60.

Friday, the Padres open a series at Dodger Stadium. They are 12 1/2 games behind their hosts. San Diego might be playing for a wild-card spot, but it should soon add more firepower. Fernando Tatis Jr., Soto’s friend since they were 15-year-olds in the Dominican Prospect League, is expected to return from wrist surgery this month.

This week, Tatis recalled his first impression of Soto. At 15, Tatis had yet to hit a major growth spurt. He had tools and he was projectable, but he was still a raw, gangly bundle. Soto presented a slightly different picture.

“I think he was more developed than me,” Tatis said. “He was stronger. He was always mature at the plate since that time.”

Since then, Soto has learned the strike zone better than almost anyone else. He has soared to stardom. He has won a World Series. He has elicited comparisons to all-time greats. And he has prompted the Padres to go all in on his overwhelming talent.

By walk or by slug, he is ready to keep doing it.

‘It’s an illusion of choice’: why young Kenyans are boycotting the election