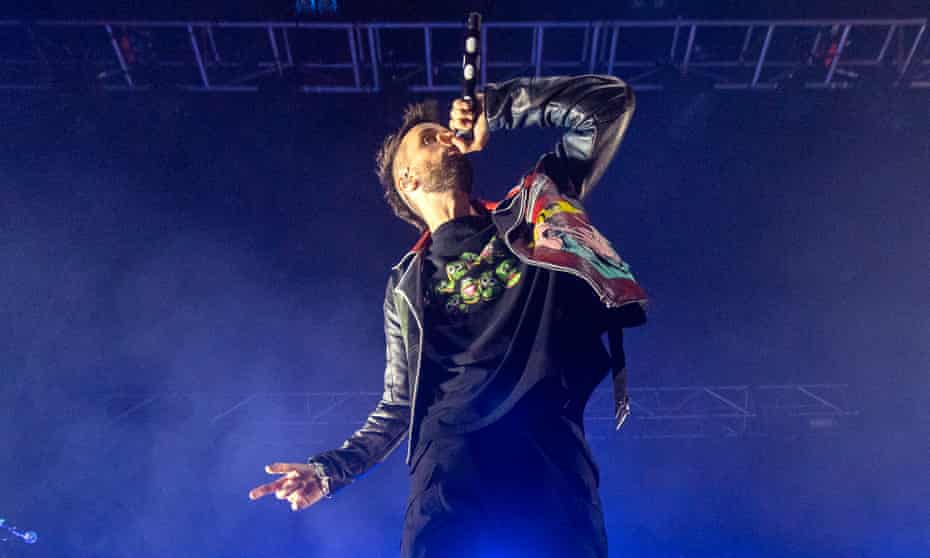 Last July, Tom Meighan was sacked as Kasabian’s singer the day before his conviction for assault against his partner, Vikki Ager. The Leicester electronic-rock band have shown no prospect of reconciliation to their former frontman of 23 years, nor at any point looked willing to let his transgressions knock them off their swagger, in part perhaps because Meighan’s obvious successor was always at hand.

At their first gig since 2018, a lean and charged greatest hits set that shakes the Glasgow Academy to its foundations, it’s Kasabian’s co-vocalist, guitarist, songwriter, producer and leader Sergio “Serge” Pizzorno who ascends to centre stage, with a certain air of destiny (the Music’s Rob Harvey joins as backing vocalist and guitarist). He still intermittently straps on a polka-dot Rickenbacker to hog the best riffs – the grizzled fuzztone opening run of Underdog, for instance. But mostly Pizzorno bounds free, mic and occasionally maracas in hand, with a practised air that suggests he might have been secretly rehearsing his moves in front of the mirror his whole life.

Looking as if he’s arrived straight from Zumba class in cropped trousers, trainers, and baggy tee, Pizzorno launches his 6ft 4in frame into the air athletically for the cliff-edge drops of Bumblebee and Fast Fuse. Perhaps appropriately for the raver’s choice of rock band, he does a whole lot of dancing. During the clubby coda of Treat, Pizzorno shuffles on the spot with such abandon you’d feel only half-surprised if he threw himself on the floor and started windmilling. It’s questionable whether You’re in Love With a Psycho (“and there’s nothing you can do about it”) is a tasteful choice of song tonight, or any night. But the mass hysteria that Kasabian inspire goes far beyond the lyrical.

Fronting Kasabian is in some ways a nominal role when it’s the crowd who are their de facto voice for so much of the shows. Twice the band stand back to let the audience bellow the wordless refrain of LSF. Every last bit of Kasabian’s aggro-disco battle cry Fire is howled back at them, right down to the guitar melodies. Earth and vocal cords scorched, Pizzorno signs off only with praise and thanks to the fans, and not a word to the past.

The Storyteller by Dave Grohl – a Foo Fighter pulls his punches

Elizabeth Strout: ‘I’ve thought about death every day since I was 10’

How Leonard Cohen mined sacred texts for lyrics to his songs