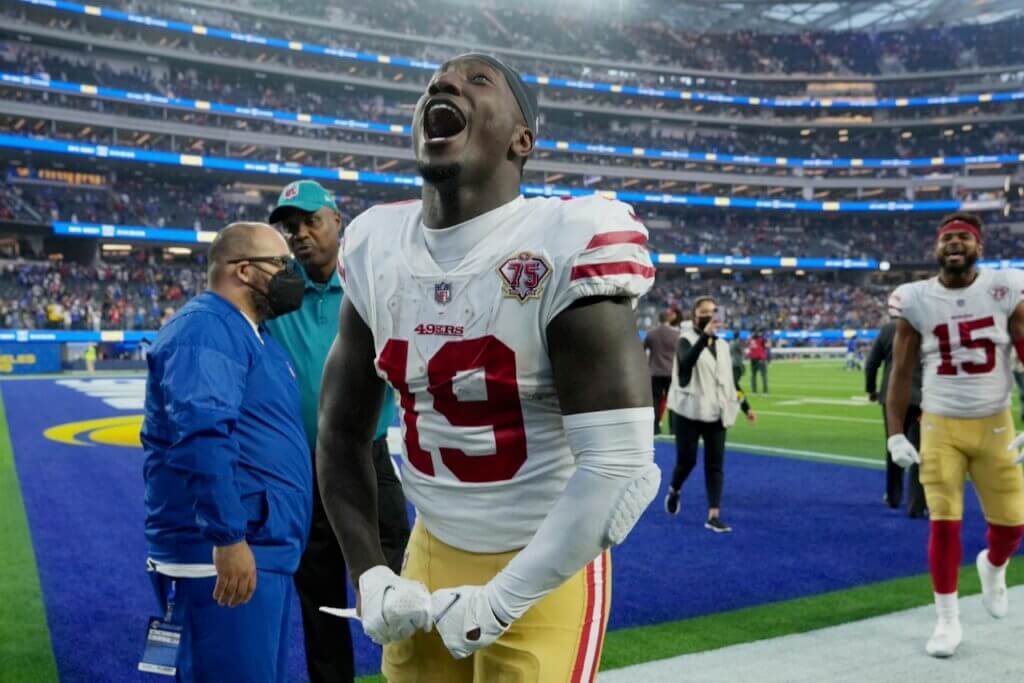 Did Jed York just have his first Joe Lacob moment?

Even if York didn’t make the actual call to Deebo Samuel’s agent this weekend to finalize a new three-year, $73.5 million extension in time for Monday’s first padded practice, York surely signed off on the uncommon aspects of this deal. Maybe lead negotiator Paraag Marathe or general manager John Lynch suggested it. But again, the owner has to agree to it.

And I believe York did what Lacob has done several times in recent Warriors history, which is not something we’re used to seeing from the 49ers’ side of town. York essentially had to tell his negotiators:

Let’s just skip the financial caution a bit, we need this player right now. Let’s go for it. But now we’ve gotta win.

This is not to say that York has run a cheap operation. The 49ers have absolutely paid their players at market rate and also are paying Kyle Shanahan and Lynch quite well, too. The 49ers traded three first-round picks to land Trey Lance in April 2021 and still kept Jimmy Garoppolo’s large salary on the payroll because Shanahan and Lynch felt that was their best way to win in 2021, and they were right. And York allowed it. Yep, Garoppolo’s salary is still on the payroll now, even with Lance officially settled in as QB1. (Though Garoppolo’s salary should be coming off soon.)

But still, this Samuel deal feels different because it is different. It feels more urgent than their usual circumspect dollar discussions. It seems less plotted and planned. Yeah, it reminds me of Lacob, who is a pretty solid model to follow if you want to win. (And spend a lot of money.)

While the 49ers got their way by keeping the guaranteed money in this deal to $58.1 million — well under the guaranteed totals landed by top receivers Tyreek Hill, Cooper Kupp and Davante Adams in the last few months — the relatively short three-year span is a huge team concession. It’s about the largest practical concession I’ve seen the 49ers make in Marathe’s negotiating tenure, which has been long and incredibly efficient.

The 49ers did it this way to get Deebo back on the practice field after his four-practice “hold in” to start training camp. They did it right in time for Monday’s first padded practice, which may or may not have been used as a real deadline by both sides. They did it as Lance and the other quarterbacks were struggling a bit to start this camp against the 49ers’ swarming defense.

“You know, I love our team right now,” Shanahan said at the start of camp, “like when I just sit and go through our positions, some of the young guys that we’ve added, some of the young guys in the last couple years who have quickly become some of our better players and leaders. … What I see on paper is I see a chance and … that’s all you can ask for as a coach. And I just want to go to work with them.”

This tells you a lot about how much York trusts Shanahan and Lynch. This also tells you how the entire brain trust is looking at the 2022 season. And yes, it tells us all how badly everybody at the top of this franchise wants to win a title after two playoff trips in the last three seasons.

The 49ers have done it that way because longer deals allow them to spread the bonuses across the life of the deal for cap purposes. For instance, Williams’ bonus was $30 million — spread over six years, that only adds $5 million per year to his cap hit. Kittle’s bonus was $18 million — spread over five years, that only adds $3.6 million per year to the cap hit. When you do it like this, you can keep the salaries relatively low (because the player is happy getting the bonus money up front) and keep the cap hits managed. It also gives the 49ers the right to keep the player for a longer period, of course, without increasing the initial financial risk.

I’m sure the 49ers wanted five years with Deebo, too. But the 49ers weren’t willing to go over $60 million in guarantees, which essentially meant that they wanted the ability to get out of the contract after three years if Deebo’s production went down while maintaining the right to keep him for Years 4 and 5 if he kept playing at this level.

That was where the “usage” stuff all came up. I believe the 49ers were worried that Deebo, with his wide-back role, could have a running back’s shorter career arc. I believe that Samuel and his agent were not happy that his versatility as a runner was being used against him in these negotiations, which is what led to his trade request last April.

And it looks like the big compromise is that the 49ers got their way on the guaranteed money, but they can’t spread the bonus, whatever it turns out to be, over a long-term agreement and, if Deebo continues to play well through the contract, will have to negotiate with him again relatively soon.

We’ll also have to see if the 49ers gave Samuel any assurance, stated in the contract or not, that they will limit his use as a running back or find a way to reward him if he carries it as much as he did at the end of last season. But by the reporting so far, I don’t think that was part of this deal. I don’t know how that could be practically monitored, anyway. If Shanahan turns to Deebo at the end of a huge game and says, “Hey, we need you to run it to win this game,” do you think Deebo would check the contract language first? No way.

Deebo wants to win games immediately. Shanahan and Lynch want to win games immediately. We always knew that York badly wants to win and was willing to pay a lot of money to do it. And we just found out that he also has some Joe Lacob in him, which is almost always a good thing for a team but ratchets up the pressure, too. This is how you negotiate when you’re very, very hungry for a championship.