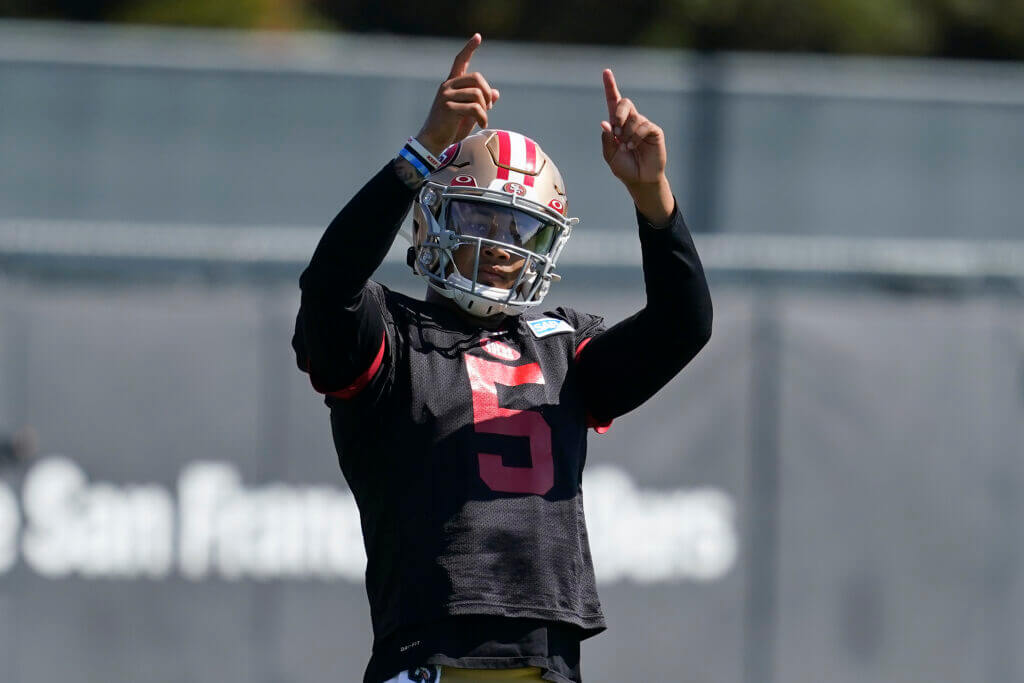 I was wondering when Kyle Shanahan would inject some misdirection, exotic looks or just a couple of counter punches into his offense during training camp. I was waiting for Trey Lance to fake a handoff to the right, burst around the left edge and sprint 20 yards downfield before a defender came anywhere near him. Or anything like that.

I was guessing that Shanahan and his offense had some things to unveil after almost two weeks of getting regularly walloped by the 49ers’ defense. I knew all the vanilla plays and bad interceptions from the first 10 practices were just a starting point for the real Shanahan offense. However satisfying it is for Shanahan to watch his very talented defense do very talented things, I could not imagine that he wanted to go a whole camp without seeing his offense start to percolate.

And on Tuesday, it happened: Lance read-option keepers for dynamic runs down the sideline, Deebo Samuel motioning into the backfield and causing some pre-snap defensive consternation; Lance on designed rollouts, bouncing through his progressions and finding Brandon Aiyuk over the deep middle.

Maybe this was all according to Shanahan’s regular practice timeline: Start slow on offense, get going right before the preseason. Or maybe he felt the need to juice things up for a necessary morale boost. Either way, the 49ers’ offense started to actually crackle a bit on Tuesday. Yeah, with the exhibition opener coming up Friday, it was probably about time.

This is all part of the normal camp teeter-totter, of course. As every offensive player stated over the last two weeks when asked about getting dominated by the defense, early training-camp sessions are almost always tilted toward the defensive unit. This is especially true when the offense has a first-year starting quarterback like Lance and the defense is loaded with full-tilt star veterans like Nick Bosa, Fred Warner and the two Wards, Jimmie and Charvarius.

“I don’t think I’ve ever … in my career felt the offense beats the defense in training camp,” Shanahan said Tuesday morning. “When we were in Cleveland, whoever won the day got to wear the orange jersey the next day. And the defense won all 18 of ’em. And then one day we let the coaches compete in catching punts and the offensive coaches won that. So the offensive players got to wear the orange jerseys one day of training camp and that’s ’cause the coaches won the punts. Then we came out and we were a pretty good offense that year.

“It’s just different. You’re trying to teach stuff and you’re not game-planning stuff and (how) defenses are defending.”

Well, I think there was some game-planning in the team drills on Tuesday. Shanahan attacked some defensive tendencies and over-plays. Lance and even Nate Sudfeld got the flow going one way and then threw or ran to the other. The first-team offense, in particular, raced down the field in a move-the-ball session and was laughing and shouting along the way.

They acquired Lance to expand their possibilities precisely in those kinds of games. They know he will make mistakes. They also know he can make plays that Garoppolo simply can’t. Things just simply go faster with Lance at the helm, because he can go faster whenever he wants.

If you look at their schedule, the 49ers probably don’t need an electric offense to win in Week 1 at Chicago and Week 2 against Seattle. Basic 49ers physical football should win those games. But Shanahan probably needs his offense at full engine power by the Week 3 game in Denver against Russell Wilson’s Broncos and then especially the Monday night game in Week 4 at home against the Rams.

We saw some exotic stuff in the early days of last year’s camp, when Lance was getting a few snaps a day — and producing some huge plays — with the first team. But then he hurt his finger, which ended whatever QB competition there was. The 49ers went basic and stayed basic on offense from there with Garoppolo (except for the late-season shift to Deebo at running back). Then they started this camp with the basic stuff.

I was waiting for Shanahan to get a little fancier. I knew it was coming. It’s probably no surprise that this offensive outburst came in one of the few practices that starting tackles Trent Williams and Mike McGlinchey played most of the first-team reps. Solid blocking on the edges helps. A lot.

It’s also certainly not the entirety of what Shanahan wants to do. He likes the basic stuff because the basic stuff is crucial. (Hey, they won in a snowstorm at Lambeau Field last postseason by staying as basic as it gets.) But misdirection and the constant threat of QB runs absolutely seems to fit Lance’s strengths. It speeds things up. And whenever Shanahan brings all this out in a game, I think 49ers fans are going to like it.

Some other quick camp observations:

• Rookie defensive end Drake Jackson is playing on the second team right now. It might be a while before he challenges Samson Ebukam for the first-team pass-rush spot opposite Bosa. But after spending several practices watching No. 95 whenever he was on the field in team drills, I can safely predict that Jackson will jump off the screen in preseason games and likely earn 10-20 snaps a game to start his regular-season NFL career.

Bosa’s unique, of course. Nobody’s like Bosa. But it sometimes seems like the offensive line gets almost as worried about Jackson when he’s rushing the QB as it does for Bosa. That’s a natural product of Jackson’s incredible athletic ability and burst. On one play last week, he pushed the tackle almost into the QB on a rollout and then swatted the dump-off pass. On another, when Jackson was getting a first-team rep against McGlinchey, you could tell McGlinchey was determined not to let the rookie beat him to the outside and Jackson still bothered Lance by exploding off the line to the outside and reaching around McGlinchey.

And I predict that Jackson is going to get a few showcase tackles by chasing down ball-carriers from the weak side when they can’t imagine a guy his size could be running that fast. (Which is a Bosa specialty.)

• Sideline media chatter: Could the 49ers stay afloat for a few games if Lance is sidelined temporarily and they have to go with Sudfeld? My answer: Not against the good teams. In that situation, this would probably be similar to the Nick Mullens games when Garoppolo was hurt in 2020. Which were not good. But from what I’ve seen of Sudfeld in the last two camps, I think he’s better than Mullens. Not a lot better, mind you. But he looks steadier.

There’s not a ton of arm strength. He doesn’t have great mobility. But when he gets time in the pocket and sets his feet, Sudfeld isn’t bad. He should be good enough to hand the ball off 30 times, complete 65 percent of his passes, hit a long ball or two off of play action and not pile up turnovers.

Yes, Garoppolo would be a much more talented option as QB2, and Lance has already gotten hurt a couple times as a pro. But Garoppolo isn’t going to be on this team for very long. He’s going to be traded or released before the start of the season. And Sudfeld isn’t the worst option as QB2.

• Joe Staley was at practice Tuesday and confirmed that he won’t be continuing his pre- and postgame role with NBC Sports Bay Area. That’s too bad. He provided a lot of insight and obviously remains close to many current players and coaches. But this was his decision and I will say this: He looked very happy to tell me he wasn’t doing weekly TV anymore.

• Another special guest on Tuesday: Bruce Bochy, who was smiling the whole time and told me afterward that he loved the energy and music at practice.