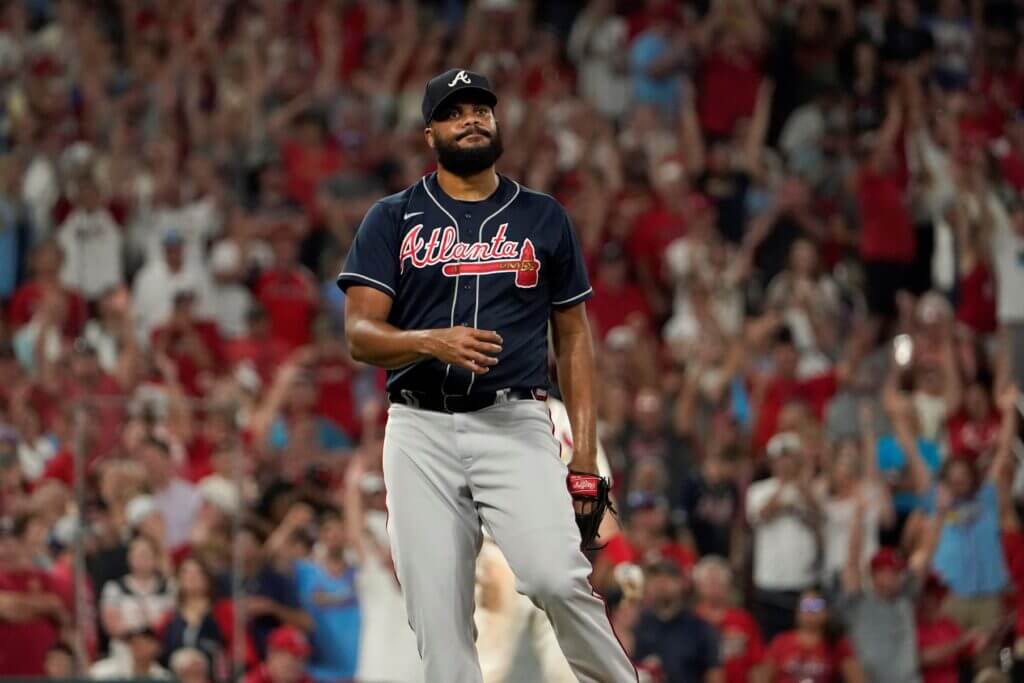 ST. LOUIS — It was an ugly two-run ninth inning Saturday night for Braves closer Kenley Jansen, who blew a save in a 6-5 loss to the Cardinals that ended on a bases-loaded walk of Tyler O’Neill — yes, the rare walk-off walk.

Jansen was entirely accountable afterward, the 34-year-old pitcher saying that everything he threw was flat, his cutter wasn’t cutting, he couldn’t hit spots. And yeah, while there was a potential inning-ending double-play grounder that instead went for a game-tying single against him, he didn’t use it or anything else as an excuse for his worst outing since April and second blown save in 18 chances since June 1.

The O’Neill walk came after Corey Dickerson’s potential inning-ending double-play grounder was hit softly enough for a bases-loaded, tying single with the infield playing back. The Cardinals had loaded the bases with one out against Jansen on a Brendan Donovan double, wild pitch, Paul Goldschmidt walk and Nolan Arenado hit-by-pitch.

And away we go! pic.twitter.com/7gJtqOXxXx

Repeat, it was ugly. And Jansen knew it.

“It sucks — it always sucks,” he said of blowing a save, especially after the three relievers in front of him had pitched so well for three innings to preserve a 5-4 lead in what turned into just the third loss in 18 games for Atlanta. “I’m not going to lose sleep over this one, because the great thing is we’ve got another day tomorrow, and just come out here against these guys.

“Listen, man, we’re all human. Of course we don’t want to ever blow a game, but that’s the nature of the game. You’ve got your ups, you’ve got your downs, you’ve got to fight through it. It happened with me many times (in the past), so I know how to come back and get back on top.”

So it ended badly, and the Cardinals came away with only their second win in the past 12 regular-season games against the Braves in St. Louis. But on a night when the Braves’ veteran starter Charlie Morton (five innings, four runs, three walks, two homers) and veteran closer both struggled, there was also a reminder of a component that has helped make the defending World Series champions a formidable team once again this season.

One night after catcher William Contreras’ three-run double in the sixth inning turned a one-run lead into a 5-1 advantage for the Braves in Friday’s series-opening win at St. Louis, another three-run hit from their catcher opened up a three-run lead Saturday.

This time it was a three-run homer, a fourth-inning drive from veteran Travis d’Arnaud, the Braves’ primary catcher and the man who, along with catching coach Sal Fasano and former catcher Tyler Flowers, has taught power-hitting understudy Contreras plenty about catching in the past few years.

Contreras, who made the NL All-Star team as a designated hitter this season, could be the eventual replacement for d’Arnaud, who was also a first-time All-Star this season and has another season left on the two-year, $16 million extension he signed 12 months ago.

For now, the Braves have the most potent catching duo in baseball in the 33-year-old d’Arnaud and 24-year-old Contreras. The two combined have 31 homers and 87 RBIs, including 29 homers and 78 RBIs from the catcher position (the others came as DH).

Add the five RBIs the Braves got in six games from backups Manny Piña and Chadwick Tromp and it’s 29 homers and 83 RBIs for Braves catchers, the best totals in the majors. Cubs catchers are next with 24 homers (15 from Contreras’ older brother Willson), and Dodgers catchers are second in RBIs with 79.

“When you look at what the two catchers are doing, at the end it’s going to be a pretty good body of work for both of those guys,” Braves manager Brian Snitker said. “At that point in (Friday’s) game, that (three-run double) was huge.”

So was the homer Saturday from d’Arnaud off Cardinals starter Jordan Montgomery, or at least it seemed like it would be, until Jansen stumbled in the ninth.

In his first full MLB season, Contreras has hit .276 with 17 homers and an .883 OPS — including another double and run scored in a four-run fourth inning Saturday when he DH’d — and has already surpassed expectations at the plate, while also making big strides defensively, including in game-calling and communicating with pitchers.

Keep in mind, Contreras hit .225 with eight homers and a .712 OPS in 56 career games before this year, and his defense ranked at or near the bottom among MLB catchers last season, when d’Arnaud got hurt and Contreras filled in for two months before being optioned back to Triple A.

Contreras began the season as a third catcher on the expanded early roster — he was that impressive at spring training — and was thrust into a more prominent role after veteran backup Piña had season-ending surgery in May, just as Contreras was about to settle in at Triple A.

Contreras wasn’t ready a year ago. He was ready this season, especially with the bat. His opposite-field power is elite by any standard, and Contreras is one of only six major leaguers this season with at least 200 plate appearances and a home run rate of better than one every 15 at-bats.

Bases-clearing double for the All-Star. pic.twitter.com/Ja8gQMRooJ

“You saw the power and all that (before),” Snitker said. “He’s matured a lot, I know that. He’s not the same guy. Obviously he’s a year older, little more experience, more confident. That power and everything, obviously, is real. That’s good to have, when you have a catching guy like that who bursts on the scene.

“It’s the perfect mix, I think, with Travis being here too. You catch (Contreras) when you need to or want to. At some point in time, he’s a kid that’s so dang strong and everything, he could be an everyday guy catching-wise.”

“That’s baseball,” Contreras said through a translator. “Pitchers are making adjustments to me, so I’ve got to keep making those adjustments as well, and I think that’s been part of the reason (for the resurgence). You have to keep pushing yourself to make adjustments to keep having results.”

Other Braves, especially pitchers, say everything else d’Arnaud contributes is even more important than his offense. Namely, his leadership role on and off the field, which has grown steadily during his three seasons with Atlanta, and the guidance he provides Braves pitchers, both young and old.

“He’s been awesome,” Snitker said of d’Arnaud as a clubhouse presence. “Probably that and more, in what he’s done for the club. He’s there, he’s consistent, he’s reliable, and he’s just a calming influence, I think, on everybody. I know he’s a big help to me, Kranny (pitching coach Rick Kranitz), just running a game and all that. And like I say, William will be that one day. Those guys just don’t show up and are that guy. It takes a few years for a catcher to establish himself like that.

“(D’Arnaud) has got a great feel about things, a calmness. He’s another one that’s been around long enough where the game doesn’t speed up on him. He’s a good calming influence during the course of a game, too. Last year we missed him for over 100 games (after d’Arnaud had thumb surgery in May), and until he comes back you don’t realize how much you miss him.”

(Photo of Kenley Jansen after he gave up a bases-loading walk to give the Cardinals the victory Saturday: Jeff Roberson / Associated Press)

‘The US could lose the right to vote within months’: Top official warns on threat to democracy | Colorado