You’ve heard plenty from the Kings and the Edmonton Oilers through six games (one requiring overtime) and off-day availabilities. The teams have spent plenty of hours in the air, jetting back and forth — and the Oilers even had one bus ride to get across the border.

Now it all comes down to one game: Game 7 on Saturday night in Edmonton. The Oilers were close to an across-the-board favorite heading into their first-round series against the Kings. In The Athletic’s survey of an executive, a scout and a coach before the playoffs started, all three picked Edmonton. The scout did take the Oilers in seven games.

On the day before Game 7, we reached out to an assistant coach in the NHL to hear his unfiltered impressions of the series. Not surprisingly, he had plenty to say about the first six games and the implications for Game 7.

First off, how much have the Kings missed Viktor Arvidsson?

I think more than any of them will let on. You’ve got a guy that’s a legitimate 30-goal scorer and he’s an opportunistic type of guy. And when you don’t have that guy in your top six, somebody has to go into that role, and it changes everything.

If anything, it’s given (Carl) Grundstrom a chance to step up and shine. He’s scored some big goals for them. Maybe he wouldn’t be playing as much or maybe he’s not even in the lineup. So, it’s a tough thing that they don’t have (Arvidsson) but that’s the way the playoffs go. When they’re usually tight-lipped, it’s something significant. I think it’s a huge loss for them.

In the series, four of the Kings’ defenseman made their NHL playoff debuts against the Oilers. How do you think the young defense corps has adapted to the pressure so far?

I’ve always liked Sean Durzi. To be honest with you, he’s exceeded my expectations. You could see him make a play out of nothing in Ontario — he can make a cross-seam pass, tape to tape, to a guy for a one-timer. He looks people off. He makes a play.

My concern was that he wasn’t going to be able … he’s not a great skater. But it hasn’t seemed to have affected him. The fact is he’s been able to orchestrate his magic on the power play. Maybe that’s because of (Sean) Walker’s absence and when (Matt) Roy was out and in (Drew) Doughty’s absence — he might not have gotten that opportunity. So he’s making the most of it.

They’re all going out there — nothing is expected of them. So they’re not feeling any kind of pressure, right? “Nobody thinks we match up. We’re missing Doughty.”

It’s taken a little bit of that pressure off them. The fact that, going into it, the Kings weren’t the favorite, it’s easier to play in the first round like that when you’re the underdog. And I think it’s easier when you open up on the road. It’s helped those young guys to get acclimated.

And the forwards have done a good job to help insulate those guys. They’ve been doing a good job of coming back, supporting and doing a good job getting available for them. It’s more of a team concept they’ve got going, and, well (Jonathan) Quick has been pretty darn good when he needs to be. Looking like the Quick of old.

You talk about the forwards coming back. That’s where Anze Kopitar is doing the heavy lifting. Do you think that part of his game gets overlooked even to this day?

It seems like he’s been taking a lot of grief. But with (Phillip) Danault there, he didn’t have to be relied on to do everything. You talk to our players after games and it’s like, “Holy smokes, Kopitar.”

Again, he might not have hit the scoresheet but it’s what he does to you — with faceoffs or just leaning on you, puck protection. He hasn’t lost that at all. They can say he’s slowed down a step or two. Guys like that usually get a little more cerebral and they learn “maybe I can’t catch this guy, but I can take this angle and I’m doing just as an effective job.” That’s Kopitar for you.

Let’s move on to Mikey Anderson. Some of us were joking that he’s “Minnesota Nice” with a bit of snarl. Did you think he would become an effective shutdown defenseman so quickly?

That’s just through hard work on his part. He’s always been an intelligent kid. Now he’s playing with an edge and that’s made him more effective and harder to play against. At the start, he wasn’t very big and he wasn’t very strong. He comes out of college and it’s a whole different ballgame. Now you’re playing 82 games in the NHL. Now he can hang in there and can battle against guys that maybe before were kind of pushing him aside.

I think now he’s enjoying the fact that he can irritate the opposition, get them off their game. You can be an annoying son of a gun and (Zack) Kassian is not coming in to get involved.

The only guy that will, would be Evander Kane because those are the only types of guys he picks on. He (Kane) picks on guys that aren’t going to fight back. Also Durzi hasn’t shied away from a darn thing. Both those guys (Anderson and Durzi) are sticking their chests out. They’ve got their chin out. They’re saying, “Hey I may not be the toughest guy. But as a team, we’re pretty tough.” 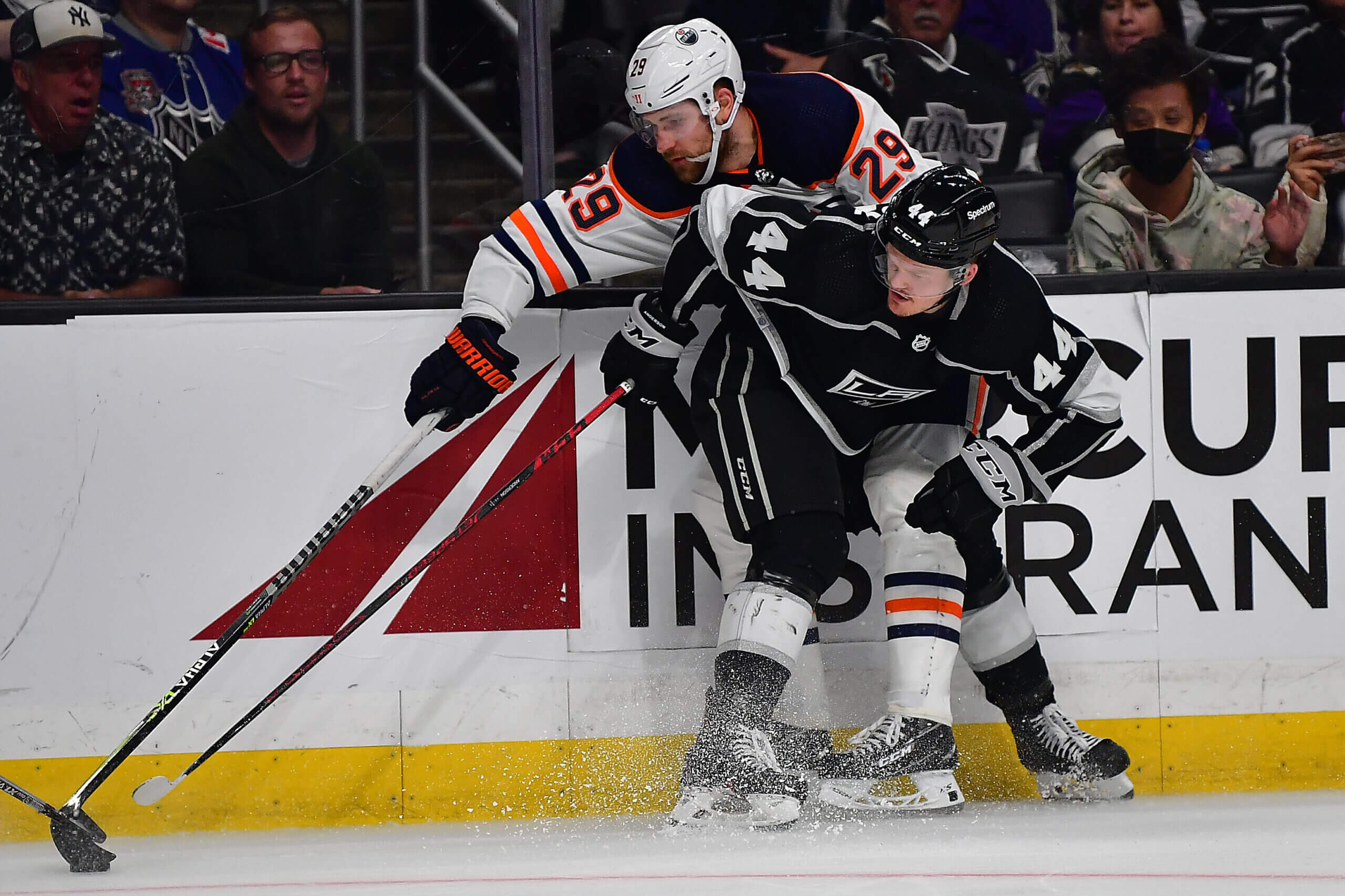 To wrap up, what is the approach when you are facing generational players like Connor McDavid and Leon Draisaitl going into Game 7, knowing their capabilities?

They (the Kings) have done a good job of containing them and that’s all you can do. As you said, at any given time they can erupt. There’s really not much you can do about it. They’re just that good. The key is by being assertive or aggressive on McDavid, you can see him now getting engaged in those things. It’s kind of taking him away from his game. I saw Draisaitl limping a little bit. He’s getting banged up.

Sometimes, not always, sometimes those guys have had enough and they don’t want to keep battling through it. And you hope that’s where you’ve got them. But you know what — that power play — it’s lethal. If they get into that with Edmonton, that power play can be deadly.

OK, that wasn’t the very last topic. We already talked about Quick a little bit, but I’d like to hear your thoughts on Mike Smith.

I think (the Oilers’) biggest weakness is their goaltender and if the Kings can expose him, then that’s their best chance. There isn’t a lot of higher-danger (chances), but he  (Smith) likes to do too much with the puck once he’s made a save or even a dump in.

The volume (shot) approach? Nothing wrong with it at all. It will create something else for them.

He is susceptible to poor goals. If you keep firing pucks on him, he’s got to make the save, control the rebound or he’s going to try to handle it to make an outlet pass or whatever. Obviously, he’s a pretty good puckhandler for a goalie, but he really tries to do too much. I think he thinks more about — as the puck is coming — “where am I playing this next,” as opposed to stopping it. To me, it’s always been, just make the save and we’ll worry about it after that.