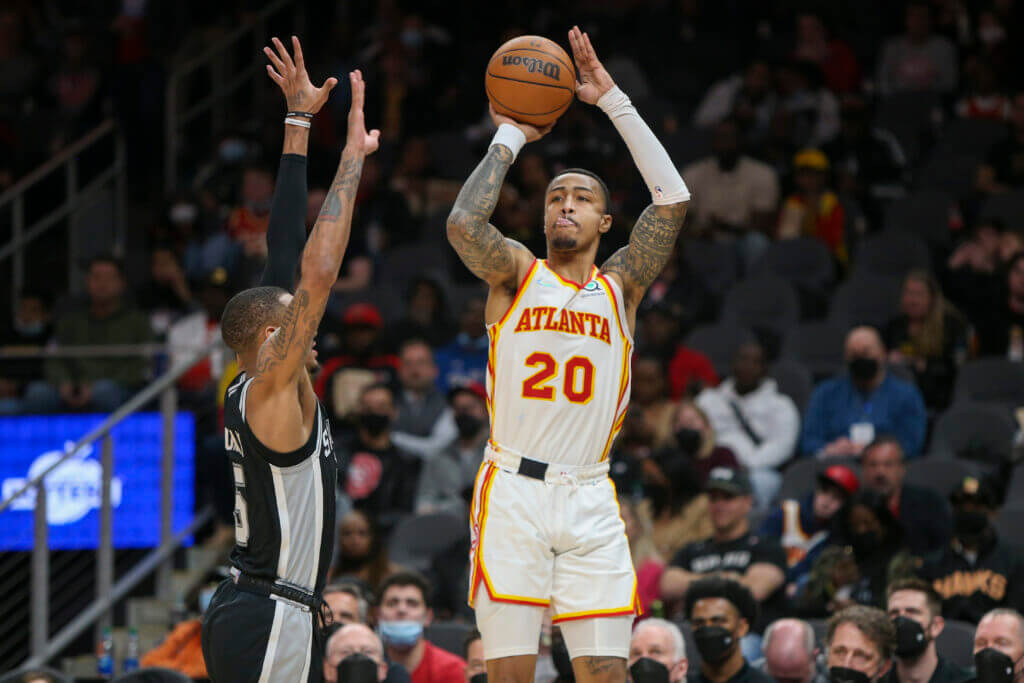 Well, the Hawks did make a draft-night trade. It just didn’t involve the player we’ve all been discussing for weeks now (John Collins). It also didn’t benefit the Hawks in any way. In fact, the only one who benefited from the trade was Hawks owner Tony Ressler.

The Hawks’ big draft-night trade Thursday saw the team send the 44th pick to Golden State for $2 million in cash and pick No. 51. Let me be very clear about this deal: There is no basketball reason the Hawks made this trade. The $2 million doesn’t help the salary cap, and it doesn’t help them avoid the luxury tax. It has no benefit to increasing your Hawks fandom in any way.

These were the players drafted from picks 44 through 50: Ryan Rollins, Josh Minott, Ismael Kamagate, Vince Williams Jr., Kendall Brown, Isaiah Mobley and Matteo Spagnolo. If any of them becomes a high-level contributor for another team, you can thank Ressler for the Hawks not having the chance to draft him. Oh, and the pick they sold at No. 44 was to the NBA champion Golden State Warriors, who frankly don’t care what it takes to possibly make their team better.

Sure, picks this late in the draft rarely pan out anyway (Nikola Jokic, picked 41st and the reigning back-to-back MVP winner, is the exception, not the rule), but it actively hurts the franchise to drop seven slots for no reason at all. UConn’s Tyrese Martin, whom the Hawks picked at No. 51, could end up being a fine player for Atlanta, but the trade is still an awful one and a move that cannot be sold to the fan base as smart basketball decision-making. This isn’t on president of basketball operations Travis Schlenk or soon-to-be general manager Landry Fields. This is only on Ressler.

The Hawks did make a smart basketball move in the first round, though, by taking Duke’s AJ Griffin. No, he doesn’t immediately solve the franchise’s glaring need for better defenders; Griffin is quite poor on that end right now. He’s 18 years old, though. The hope is his near 7-foot wingspan will help him become a good defender at some point.

For the second consecutive year, the Hawks landed a prospect they weren’t expecting to be on the board by the time commissioner Adam Silver announced the pick. Last draft, Jalen Johnson didn’t work out for the Hawks and had little communication with the franchise before he heard his name called by Atlanta. Before this draft, Griffin didn’t work out for the Hawks and only had a meeting with the organization at the combine. When asked about what he thinks he can provide for the Hawks on the defensive end, Griffin had a hilarious answer that made me believe he took comedy classes during his one year at Duke.

“To be able to be in an organization that takes pride in that, that’s definitely going to be something I look forward to. Defense wins championships,” Griffin said.

He clearly hasn’t been paying close attention to the Hawks for the past several years. He’s forgiven, though. It’s an admirable answer for a rookie. But getting better defensively is a must for Atlanta this offseason, or the team’s ceiling will be limited again. Griffin isn’t helping the team on that end this season; he may not help at all with how raw he is. As with Johnson in his rookie year, it shouldn’t be expected that Griffin will be in the rotation at any point this coming season. There’s also always the possibility of the Hawks making a deal in the coming weeks that could include Griffin. When asked if the Hawks plan to keep him, Fields only said this: “We picked AJ because we really like him. Our plan is to have him.”

If you believe in Atlanta’s publicly stated plans, then you’ll also take Fields at face value when asked about the team’s plans involving Collins. Here’s what I asked about how the organization sees Collins as part of its future.

Is that supposed to inspire confidence that Collins is going to be a Hawk for much longer? Probably not. Before the draft started, I reached out to someone close to Collins who said they felt 50-50 on the power forward remaining with the Hawks past Thursday night but that “he won’t be a Hawk past this summer.”

The truth is no one across the league who I’ve spoken with believes Collins will be on the Hawks’ opening night roster. The unfortunate reality is Collins and his family are left in limbo as they await what feels inevitable. It’s become an all-too-familiar situation for Collins several years running now. Every trade deadline and every offseason the question has always been: Is this when Collins gets traded? Whether or not you believe Collins can be an important player in the Hawks’ title pursuit, it does feel a little sour that, for someone who has always been clear about wanting to be in Atlanta, those feelings aren’t reciprocated even after he signed a five-year, $125 million contract last offseason. The money is obviously nice, but feeling wanted and appreciated is equally important.

So now we all wait for what happens with Collins. There’s still a chance he could be dealt to San Antonio as part of a package for All-Star guard Dejounte Murray. There’s always a chance of someone else across the league suddenly becoming available. Brooklyn’s situation bears monitoring. Kyrie Irving could leave, which could set in motion Kevin Durant wanting to play elsewhere and possibly the Nets being forced to trade both stars. The Hawks, of course, would have no interest in Irving but obviously would be interested in Durant. Durant doesn’t have trade veto powers, and if the Nets do have to hit the reset button, the Hawks have several young players who could make a trade with Atlanta an enticing option for Brooklyn. That’s probably a pipe dream for the Hawks, but it’s not entirely unrealistic.

The Hawks could still pursue Phoenix Suns center Deandre Ayton in free agency. Sources tell The Athletic that the Hawks’ interest in the 23-year-old would be contingent on landing him for less than a max contract. That may not be an option, as the Pistons, who have the cap space for a max contract, are expected to be aggressive in their pursuit of Ayton in free agency.

There was a sense of disappointment that the Hawks didn’t make any splashy moves on draft night, but this is just one day of many this offseason. There’s still time for the Hawks to improve their roster. As Fields said, “We’ve been mandated to get better, and we want to get better.”

It’s obvious that the Hawks view one of their pathways to getting better as trading Collins. Everyone expects it.

“He’s done in Atlanta,” a source close to Collins said.

Now we wait for the Hawks’ next move. Let’s just hope for all of you that this trade makes more sense than the one they pulled off Thursday night. You deserve better than that.

Ukraine forces will have to leave Sievierodonetsk, says governor

‘My best friend ghosted me’ – could platonic couples therapy bring us back together?