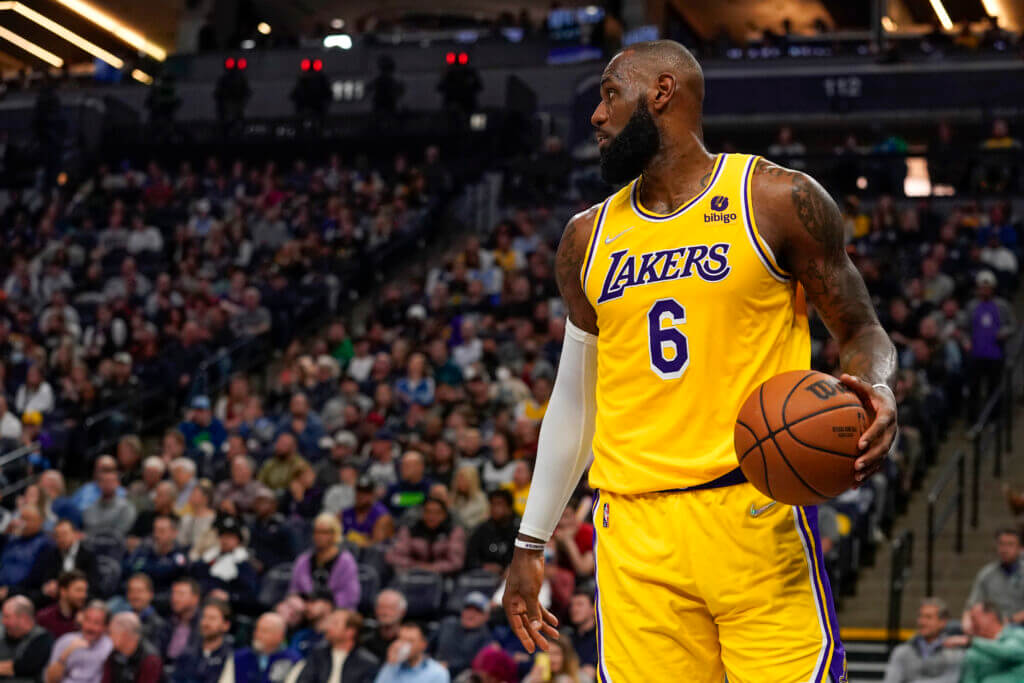 The biggest news of the day came a few minutes before the NBA’s 2022-23 schedule release.

The Lakers and LeBron James agreed to a two-year, $97.1 million contract extension, sources told The Athletic’s Shams Charania. The deal keeps James under contract with Los Angeles through at least the 2023-24 season. James has a player option for 2024-25, according to ESPN. His extension is worth up to $111 million over two years based on salary-cap rises, per Charania.

James, who will turn 38 on Dec. 30, was limited to a two-year extension because of the CBA’s “over 38 rule.” He can not be traded in the upcoming season with the raise in the second year of the extension exceeding five percent. The extension makes James the highest-earning player in NBA history with $532 million in career guaranteed money.

Congrats @KingJames on your 2 year 97.1M dollar extension and becoming the highest paid player in the history of the NBA! #Klutch pic.twitter.com/FAF3JaA0zs

James’ extension loomed over the Lakers’ summer and had the chance to linger until June 30, 2023 — the deadline for him and the Lakers to agree to terms before James became a free agent next July.

James stirred speculation during the 2022 All-Star break when he told The Athletic that “the door’s not closed” on the possibility of him returning to Cleveland to play for his hometown Cavaliers. Wednesday’s extension closes the door on that option — at least until 2024, the same summer that James’ son, Bronny, is eligible to be drafted by an NBA team. James told The Athletic earlier this year that he plans to play the final season of his NBA career with Bronny.

Those around the team were confident that James signing an extension was likely, considering how much he’s enjoyed playing for the Lakers and living in Los Angeles. The primary complication in James’ decision was that he has been privately adamant that the Lakers still need to improve the current roster and trade for superstar point guard Kyrie Irving, league sources have told The Athletic.

There was a belief among some that James might refrain from signing the extension quickly as a leverage play. James could’ve twisted the Lakers’ proverbial arm, applying pressure to make a trade, similar to the way he has operated in the past. Instead, he committed for at least the next two seasons, regardless of if the Lakers trade Russell Westbrook or how they fare this season.

Had James not signed an extension, dragging this into training camp and throughout the season, there would have been rampant speculation all season regarding his future. It would’ve been one of the first questions lobbed at James during media day, and a frequent ask by reporters on the road.

James signing the extension now — nearly six weeks before training camp — puts the storyline to rest and gives the Lakers a clearer vision of their future. James and Anthony Davis are now on the same timeline, with both superstars having the ability to negotiate new deals or test free agency in 2024.

James’ commitment also puts the Lakers on the clock to rebuild a championship-level roster. As currently constructed, the Lakers aren’t championship contenders.

The Lakers have at least two more seasons with a championship-caliber No. 1 in James. There’s no telling what the future holds — James continues to defy Father Time — but the team’s championship odds are directly tied to his peak performance, which will only last so long.

In a vacuum, the Lakers’ best chance to win another title with James might be going all in on the upcoming season rather than waiting until 2023-24 or 2024-25 to make a splashy addition, when the surrounding pieces could be better but James will be pushing 40 and not as dominant or athletic.

As long as James and Davis are both healthy and producing at All-NBA levels — their health has been an issue over the past two seasons — the Lakers have the foundational tandem of a championship team. Injuries derailed the 2020-21 season. Last season’s supporting cast obviously wasn’t good enough and provided a template of how not to build a team around James and Davis.

This season’s supporting cast is markedly better, but there are still major holes in the rotation — namely 3-point shooting and perimeter defense — and the obvious limitations that come with Westbrook likely playing such a prominent role on the team.

James certainly had reason to sign the extension sooner than later. The extension locks in financial security. He could’ve suffered a major injury — he’s already endured notable injuries in three of his four seasons in Los Angeles — that would’ve potentially put his future in jeopardy. But realistically, he was always getting that money — either from the Lakers or elsewhere on the free-agency market.

Which brings up the last remaining big decision the Lakers need to make between now and February 2023: Westbrook’s future and the subsequent effect on their title window.

The Lakers have to figure out: Are they better off trading Westbrook and increasing their odds of winning in 2022-23, even at the expense of their longer-term future? Or should they stand pat and maintain their cap flexibility for the summer of 2023 and possibly 2024 — while risking James’ potential decline?

Considering James’ preference to trade for Irving and his displeasure with the Lakers’ inactivity at the 2022 trade deadline, the tea leaves would indicate the Lakers indicated to James they will be more aggressive in their pursuit of improving their title chances this season, which, of course, would have to come in form of trading Westbrook.

Whatever moves the Lakers make or don’t make over the coming days, weeks and/or months will have likely been discussed and analyzed in detail with James.

With Westbrook’s salary coming off the books next summer, the Lakers could have upwards of $34 million in cap space in 2023, depending on what Talen Horton-Tucker does with his 2023-24 player option and how they handle the rest of their roster. That’s not enough to add a third max free agent, but it’s enough to add a better third piece or, if split among several players, better depth for a currently thin roster. They are projected to have max cap space in 2024 — the year James will turn 40.

James ultimately made the decision that was best for both him and the Lakers. The team has its two best players locked in for at least two more seasons, extending a championship window that was beginning to look like it was closing.

But the job’s not finished. James’ extension was only half of the Lakers’ two most important matters this offseason. Another franchise-altering decision awaits.