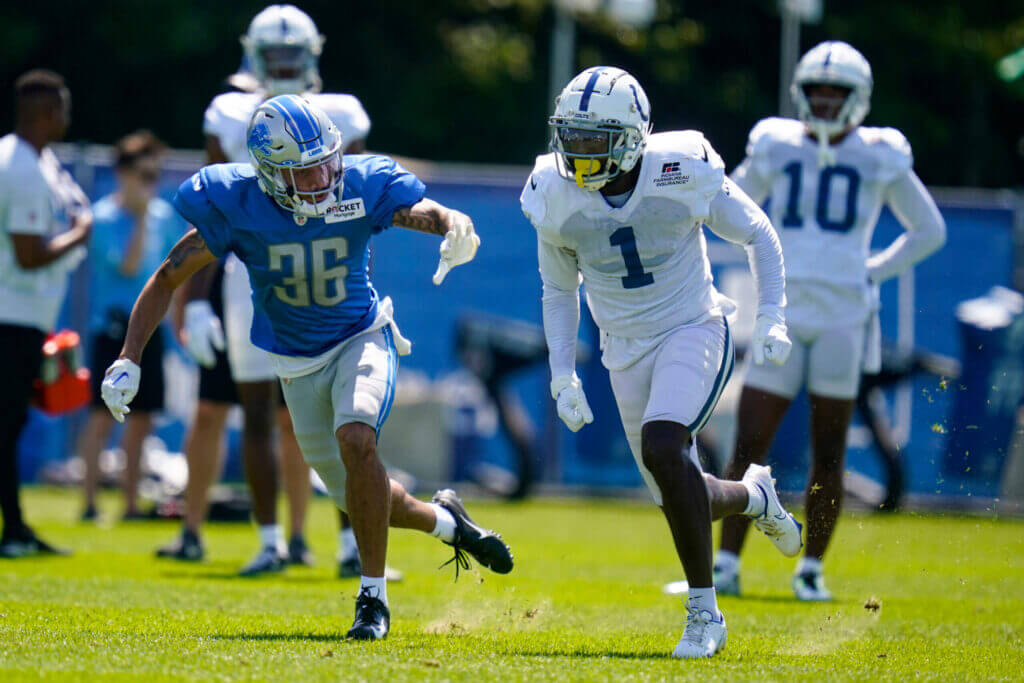 WESTFIELD, Ind. — Kelvin Sheppard told us this was coming, even though he didn’t want things to reach this point. But as the tape piled up and evaluations were made, this all felt … inevitable.

“Watch Rodriguez,” Sheppard told his Lions linebackers during a film review session shown on Tuesday’s episode of “Hard Knocks.” “I’m f—king sick of saying this about a rookie. What do y’all want me to do? Put him out there first? ‘Cause that’s what’s about to happen.”

Frustrated with the play of his position, Sheppard warned his linebackers that Malcolm Rodriguez — a rookie sixth-round pick — would steal first-team reps from the more experienced players ahead of him. That came to fruition Wednesday. With the Lions traveling to Westfield, Ind. for two days of joint practices with the Colts, Rodriguez got the nod as a first-team linebacker.

When the Lions and Colts began the scrimmage portion of practice, there he was, No. 44, jogging out to the field next to presumed starter Alex Anzalone. Dan Campbell and his staff view these joint practices as two valuable days of evaluation — perhaps more so than the preseason game Saturday. It means something that Rodriguez was out there. Even though this probably wasn’t part of the plan.

“This ain’t nothing against you, Rodriguez,” Sheppard said during the meeting on “Hard Knocks.” “Matter of fact, you’re f—king playing your ass off, dude. But he’s a rookie, who I’m doing everything I can not to put out here first.”

It’s understandable that the coaching staff would want to ease Rodriguez into the mix, and to be fair, they have. He began with third-team reps, then second-team reps, and has climbed his way near the top of the depth chart midway through August. That’s all on Rodriguez, who has flashed the traits they saw in him coming out of Oklahoma State.

However, none of this means Rodriguez has locked down a starting job. It could be as simple as Sheppard and the defensive staff looking to send a message to others, letting them know they need to step up. One of those players would be second-year linebacker Derrick Barnes, who has had an inconsistent camp, followed by an inconsistent preseason opener. Jarrad Davis hasn’t looked great, either. It’s fair to wonder how much of this has to do with Rodriguez impressing, as opposed to others failing to meet expectations.

Regardless, it’s clear that Rodriguez has quickly earned the trust of this coaching staff. He’s in a great spot.

“It’s just one of those things, you’ve just got to have confidence at this level,” Rodriguez said after practice. “You just gotta bring your own confidence and act like you belong here. I come to work every day, put myself in my shoes and be like, ‘Hey, I’m here for a reason.’ I just come to work.”

I mean, think about it. We went from wondering if Rodriguez could carve out a role on special teams to monitoring his status as a potential starter. After he wrapped up with reporters, a line of Lions fans formed along the fence at Grand Park Sports Campus, chanting his nickname, “Rodrigo,” calling for his attention to sign autographs. He’s come a long way in a short period of time, which is both a testament to his play in camp, and the play of those around him.

In a film review before training camp, we highlighted some areas where Rodriguez must improve — like his knack for going too fast, to a point where he takes himself out of a play. But even when he’s had some rookie moments, Rodriguez has still managed to recover and find a way to be near the ball more often than not. At the end of the day, you’d rather have a linebacker who’s going full speed and playing fast than the alternative. Rodriguez’s instincts and speed have him firmly in the mix at his position. Even if he ultimately doesn’t win the job out of camp, it doesn’t look like he’s going away anytime soon.

As for how Rodriguez’s defense fared against the Colts’ offense on Wednesday? Well, that’s another story.

More defensive observations from Day One.

I was particularly interested in this matchup, mainly because, well, the secondary has been trending in the wrong direction. The Lions’ pass-catchers have won more battles than they’ve lost during training camp, but we finally got an extended look at the Lions’ defensive backfield versus another opponent — even more so than in the preseason opener.

The Colts rotated quarterbacks pretty frequently, but I tried to hone in on Matt Ryan’s reps, since (apologies to Nick Foles) he’s the type of quarterback this secondary will be facing on Sundays.

This wasn’t every rep, but it gives you a bit of an idea. It was good to see Elliott and Walker hold their own against the tight ends. Right now, they’re probably the two most reliable defensive backs on the roster, but that’s not saying a ton based on where this secondary is at. The Colts have some solid pass-catchers, but nobody would call this an elite unit or anything.

You would’ve liked to see more from the corners. I was not impressed with Oruwariye’s reps in this drill. On the deep ball that Pittman was flagged on, he probably could’ve made the catch without contact. I also saw Jeff Okudah get beat by Pierce on the far sideline during this portion of practice. Not exactly encouraging.

If you play fantasy football, I’d probably take a long look at Pittman. He looked terrific out there, and carved up the Lions’ secondary all day. Not just in one-on-ones, but in the scrimmage portion, too.

Pittman, the third-year wideout from USC and former teammate of Amon-Ra St. Brown, looked like Ryan’s top target most of the afternoon. He had one of the highlights of the day Wednesday when he beat Okudah on a deep post over the middle, broke a tackle and picked up another 20 or so yards after the catch. This was good for a gain of 40-plus.

Pittman also looked pretty good going up against Oruwariye, who’s currently locked in as CB1 in this Detroit secondary. He beat Oruwariye twice during one-on-ones (though one catch was flagged for offensive pass interference) and got him a few times in various scrimmage portions. Of course, it helps when your quarterback looks sharp, and Ryan was dealing most of the afternoon. Our Colts beat writer Zak Keefer had Ryan 10-of-12 in team reps, perhaps his best day of camp to date. Perhaps it’s no coincidence that type of performance came against this secondary.

The Lions and Colts also got in some red-zone work during Wednesday’s practice. One of the highlights was rookie Aidan Hutchinson recording some good pressure on a pass-rush rep. However, you could hear plenty of cheering from the home crowd around this area of the field, and for good reason. Ryan attempted four passes during red-zone work and threw three touchdowns: one to Pittman, one to Pierce and one to Dulin. Okudah and Oruwariye were on the other end of a couple of those touchdowns. Make of that what you will.

If there’s a silver lining here, it’s that the Lions’ defensive front held its own against the Colts’ rushing offense. That shouldn’t be entirely overlooked, here. Jonathan Taylor had a relatively quiet day from what I saw, and there weren’t too many running lanes available for him or for Nyheim Hines. I also watched some members of the Lions’ defensive line winning one-on-one matchups against the Colts’ offensive line during individual work.

A quick note on the offense

I spent Wednesday focusing on the Lions’ defense, but I will take a closer look at the offense when we’re back out there Thursday morning. A few notes: Wide receiver Quintez Cephus traveled with the team and participated in some individual work, but no team stuff. Monday was his first day back at practice, so the coaching staff is likely easing him back into the mix. The Lions worked in some of the second-team receivers, like Kalif Raymond and Tom Kennedy, with Jared Goff and other starters at times. Tight end Devin Funchess exited practice as a trainer tended to what looked like a shoulder injury. We’ll keep an eye on him.

The general sense of the day is that the Colts’ defense won the early portion of practice, but the Lions’ offense settled in and made some plays later on in the afternoon. I did make it over to the offensive side for some of the Lions’ red-zone reps, though. Here’s what I saw:

• D’Andre Swift rush for 4 yards.
• Goff completed pass to T.J. Hockenson, good for a gain of 5.
• Swift on a toss to the left, good for about 3 yards and the first down.
• Goff to St. Brown, front right pylon, touchdown. St. Brown looks like he’s ready to go.
• After the score, the first-team offense remained on the field for a few more plays inside the 10. The next play was a Swift touchdown, in which he beat the Colts defense on a stretch run to the left. The starting offense stayed on for one more play — a throw from Goff to a wide-open Josh Reynolds — but the pass was dropped.

Again, check back Thursday for a more in-depth look at the offense. Should be a fun one.