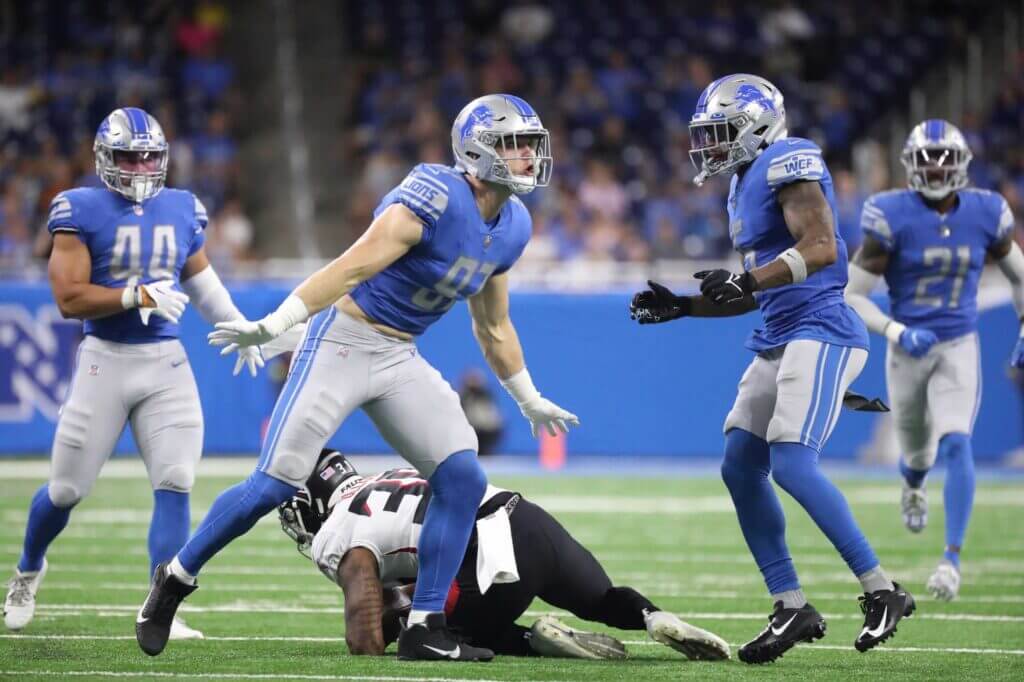 DETROIT — It was a short day for the Lions’ starters in the team’s preseason opener against the Falcons on Friday. That wasn’t a surprise: Dan Campbell told reporters earlier this week he only expected them to play a quarter. But the reps we saw were revealing, and very necessary.

The Falcons took advantage of a late fumble and scored a go-ahead touchdown with 1:30 remaining in the game, ultimately winning 27-23. The outcome, though, is less important than the Lions’ work on the field.

So, let’s get into that.

We only got one series of action from the starting five, but what a series it was. Straight bully-ball. There was so much movement in the trenches. Center Frank Ragnow, who missed 13 games last season due to a toe injury, looked great. Quarterback Jared Goff didn’t have to worry back there. This unit has looked spectacular all throughout training camp, and this was our first chance to see it against an opposing NFL defense. The eye test definitely held up.

The offensive line starters didn’t play a single snap together in 2021, but this was a reminder of their ceiling. They made it look easy.

“They’re jelling,” Goff said. “It’s coming together for them, for sure, as you’d expect it to at this point in camp. It’s been fun to watch and obviously fun for me to be behind them and watch it come together.”

An interesting note learned after the game: Goff wasn’t supposed to play Friday. Campbell and the coaching staff had prepared to give him the night off. But when Goff learned of their plans, and learned that his starting offensive line was set to play, he walked into Campbell’s office and let him know that he, too, wanted to be out there.

“He found out and that was not what he wanted to do,” Campbell said. “He had conviction about not wanting to do it, and I’m all for conviction.”

Goff — who said after the game that he was a little sick — finished 3-of-4 for 47 yards and a passer rating of 113.5 in his lone drive. It lasted 10 plays, leading a 79-yard scoring drive. He found Amon-Ra St. Brown twice on the drive, and his other completion went to Brock Wright for a gain of 20.

A short day, yes, but the fact that Goff pushed to play for his offensive line tells you more than his light workload. He’s all-in.

Hutchinson wasn’t out there long, but his impact on the game was undeniable. On his first play, he chased down Marcus Mariota — a very mobile QB — and stayed with him, before knocking him out of bounds with a hard hit. A few plays later, he tossed Jake Matthews like a rag doll, grabbed Qadree Ollison and threw him to the ground for a 4-yard loss. That was the starting defense’s best highlight Friday night, courtesy of its rookie. He also drew a holding penalty on the series.

The drive ultimately ended in a touchdown for the Falcons, but you can hardly blame Hutchinson for it. That was an excellent debut, albeit in a preseason game versus a team that will likely end up drafting early.

The defense is still very much a work in progress

We knew the Lions’ offense was further along than its defense, but we saw it up close in this one. Let’s start with the corners. Will Harris and Amani Oruwariye started at corner. Jeff Okudah rotated in quickly. That’s your top three there. Overall, the defensive passing numbers weren’t terrible, but I’m not sure Detroit’s secondary did much to inspire confidence.

Oruwariye was beat on a crossing route over the middle by rookie Drake London. Okudah gave up a first down to KhaDarel Hodge on third-and-8 in the red zone. Some of the young defensive backs, like Kerby Joseph, looked out of place at times. And, of course, there was the late touchdown from Desmond Ridder to Jared Bernhardt, beating Cedric Boswell. Boswell couldn’t locate the ball in the air.

Atlanta had 168 rushing yards, averaging 5.8 yards per attempt. It was particularly noticeable in that opening series. Of the Falcons’ 82 yards on their opening drive, 61 came on the ground. After Detroit’s issues against the run in 2021, that’s not ideal. But it’s only the preseason. We’ll see how things look in Indianapolis next week.

Derrick Barnes and Malcolm Rodriguez got the nod at linebacker. It was a chance to get a good look at the two youngsters, who are hoping to prove they can be part of the core. But it’s clear they’re still ironing things out.

Barnes missed a tackle on third-and-5, extending the Falcons’ drive, right after Hutchinson’s tackle for loss. On a first-and-15, Barnes blitzed up the middle with Rodriguez splitting out to cover Ollison. Mariota didn’t panic, scrambled right and picked up 10 yards on the ground. On the very next play, Rodriguez played the outside gap, while Barnes was blocked by the left guard, paving the way for Ollison to rush for 18 yards.

It was a tough series all around for Detroit’s young linebackers. Barnes did have a nice tackle for loss later in the game, and Rodriguez looked fine overall. But there were some issues there against the Falcons’ ones.

Hutchinson didn’t seem to have many problems chasing down Mariota, but the rest of the defense had issues with him and Ridder. Falcons quarterbacks rushed for 82 yards against Detroit, and were able to extend plays with their legs.

Perhaps something to monitor when Jalen Hurts and company come to town in Week 1.

“It’ll be everything,” Campbell said. “They don’t see that from us because we don’t have these mobile quarterbacks like that. So to see that and get live reps at that, it’s really just a reminder and an emphasis on gap control, contain, contain rush, all these things, man. You have to rely on the guy next to you. …We allowed them to break contain more than a couple of times.”

Tim Boyle got the first shot at QB2, and it was an experience

Shortly after Goff and the first-team offense exited Friday’s contest, Tim Boyle jogged onto the field with the twos. He was the next man up for Detroit and, at times, looked good in the role. He lofted a perfect deep ball to Kalif Raymond for a gain of 45. His fade-route TD to Devin Funchess was about as good as it gets. That’s what you like about his game. He’s got the arm to make throws that David Blough can’t. The rest leaves a lot to be desired, though.

Boyle threw high to a wide-open Trinity Benson. He was nearly picked off on a late throw to Raymond and was picked off on a ball intended for Kalil Pimpleton. That interception was his last series of the game.

That’s part of the Boyle experience. The fact that he got the first nod likely means he has a leg up on Blough, but mistakes like that won’t do much to slam the door shut.

The Lions’ offense seemed to move the ball with more consistency when Blough entered the mix. He won’t wow you on many throws, but the intermediate passing game was a lot smoother, and his chemistry with Tom Kennedy was noticeable. He took his unit inside the Atlanta 10 on his first two drives, though Detroit ultimately settled for field goals on both. You’d like to see the offense punch those in.

The Lions were in position to win this game, with the offense moving the ball and the clock winding down. However, Blough fumbled a simple snap and Atlanta recovered. A case of moving too quickly, perhaps. Plays like that won’t elevate Blough on the depth chart.

Campbell talked about both Blough and Boyle after the game.

“Both of them, I thought, made some really good plays, man,” Campbell said. “But then there’s a couple of these plays that leave a bitter taste in your mouth.”

To be quite honest, I have not been impressed by either quarterback in training camp, and the first preseason game didn’t do much to quiet those concerns. We’ll keep watching, though.

Kalif Raymond and Tom Kennedy have looked great all camp, and it translated to Friday’s game

First things first: What a game for Kennedy. Eight catches (12 targets) for 104 yards. He was Blough’s best friend out there, consistently moving the chains for the offense. He’s been doing this all camp, too. You forget about him long enough, he’ll make you remember. Campbell summed it up as best as he could.

Raymond had a solid day himself. He finished with two catches for 52 yards. You saw the speed on the 45-yarder. He’s been pretty consistent in camp on those deep balls. He had a few steps on Falcons defensive back Darren Hall and positioned himself for a third catch, but a bad ball from Boyle gave Hall enough time to recover and nearly pick off the pass. A good day for both dudes.