The Lions have 29 players on the field for rookie camp this weekend: eight draft picks, 12 undrafted free agents and nine tryout invites. The three-day minicamp doesn’t reveal a whole lot, but it does provide a nice baseline for the coaching staff.

​​”I would say we’re trying to get them acclimated with what we’re doing schematically, so an introduction to our schemes, offense, defense and special teams,” Detroit coach Dan Campbell said of the goal for this Friday to Sunday stretch. “Then, we’re trying to assess their movement skills and their shape: What kind of shape are they in? What do they really look like as athletes now that we’re around them?”

The Lions were on the field for a little less than two hours Saturday — they opened with 11-on-11 install, closed with a quick 7-on-7 period and worked a handful of WR-DB drills in between.

A few observations on how it all looked:

• No. 2 pick Aidan Hutchinson comes with a reputation for never taking reps off. And that was on display even in this (relatively) relaxed setting. When the D-line was working to the side on agility and bag drills, Hutchinson was popping the tackling dummies at every swipe. After one rep, defensive line coach Todd Wash even came up and tossed an arm around him as if to tell him to keep up the good work.

“This is what I do at the end of the day,” Hutchinson said. “All that talk … I hate the talk. It’s been a lot of months of talking, a lot of rah-rah. But now we’re out here getting the work in, which is what I do.”

• It was interesting to watch Hutchinson and second-round pick Josh Paschal go through those agility drills back to back, because there was a clear contrast in styles. Both guys were at max-effort levels, but Hutchinson showed far more bend than Paschal in slicing through the bags.

That fits the scouting reports and likely usages for the Lions’ rookie defenders. Hutchinson will play almost exclusively off the edge, with an occasional inside rep; Paschal figures to see most of his 2022 snaps as an interior pass rusher (where he won’t need that bend as much), but with the versatility to help elsewhere.

“I think I fit as that guy — a big guy, a big defensive end,” Paschal said. “That’s what we’re calling it. I feel like I can play across that front, but particularly on the edge, or even if I need to kick inside for the run game. I can do that, too, and for the pass game.”

• Wide receiver Jameson Williams admitted that it’s been hard to pace himself this week, as he continues to rehab his January ACL injury. During a couple of brief interludes Saturday, he stood in place and had Antwaan Randle El and then Campbell himself toss passes to him.

Williams carried a football around with him for the entire two hours or so. In his other hand: the Lions’ offensive script for the day, so he could stay on top of the calls.

“Oh, he’s engaged now,” Campbell said. “We put him out there on the grass and that’s his domain. He’s very much engaged. He’s asking questions, he’s got the script, he’s on it.” 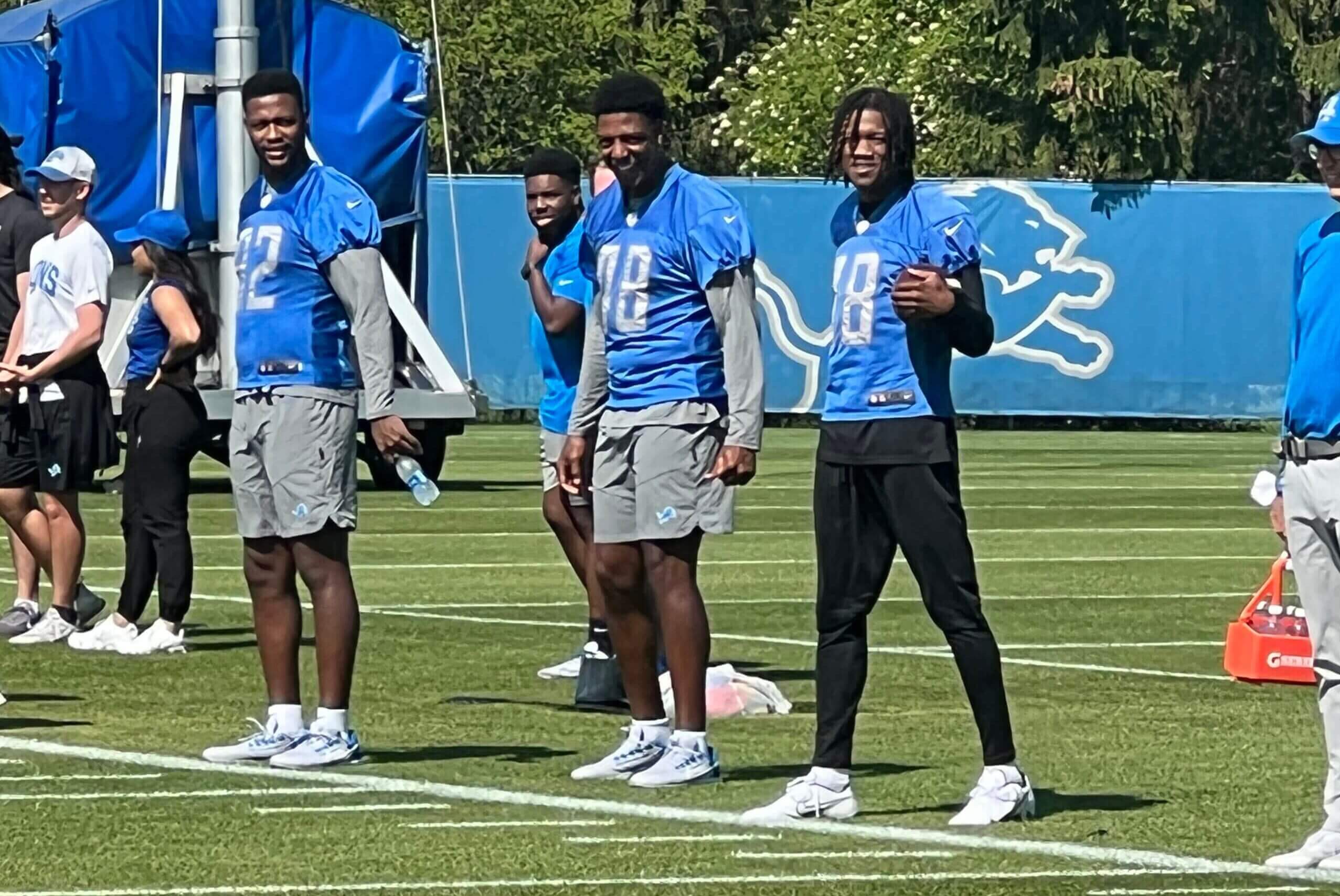 • The Lions only have two safeties in for the weekend: third-round pick Kerby Joseph and North Carolina A&T tryout player Najee Reams. In almost every team rep Saturday, Reams aligned in more of a high, free-safety role, while Joseph dropped down to play strong/nickel safety.

That is different from how Illinois tended to use Joseph, so we’ll see when the vets get in here if his alignment shifts.

“That’s actually what I want to do,” Joseph said of expanding his slot/nickel abilities. “I want to be able to be more versatile on the field. I would always be on the field, so I wouldn’t have to come off for different packages and stuff. If I could play nickel, safety … you could throw me in the corner spot if you wanted to. As long as I could stay on the field, as long as possible.”

• Also sidelined Saturday, along with Williams: Tight end James Mitchell, who’s coming back from his own ACL tear, and fellow tight end Derrick Deese Jr. (undisclosed). Mitchell said Saturday that “as far I know” he’ll be ready for camp — he didn’t have a target date for full clearance yet, but his injury occurred several months before Williams’.

“You just want to get out there, especially when you see guys moving around,” Mitchell said. “The mental reps I’m getting (are) very helpful. But also, I like to gain reps, so it is a disadvantage in that respect.”

• (Very, very) early indications are that seventh-round pick James Houston is headed for a hybrid off-ball/edge job, with an emphasis on the former. When the team split for positional drills Saturday, Houston hung with linebackers coach Kelvin Sheppard and the linebackers. And, during 11-on-11 work, he spent the bulk of his time in a stack alignment next to sixth-round pick Malcolm Rodriguez.

Those two — Houston and Rodriguez — actually played together at this year’s NFLPA Bowl, so they came in with a bit of familiarity.

“It’s just been great having him right next to me,” Houston said. “I was watching the film yesterday and I was like, ‘Man, we look good together.’”

Rodriguez just looks great, in general. His legs almost look like they belong to a defensive tackle — they’re that thick — but he still flows well in space.

Houston showed some chops dropping, too, both from an off-ball alignment or as an edge in zone. He nearly came down with a pick during the practice-ending 7-on-7 drill, despite slipping when he tried to jam Givan at the line.

• Last draft pick to mention is the No. 237 selection, cornerback Chase Lucas. He’s a rather unique case, because he’s already 25 years old, spent six years in college, and played at Arizona State for a pair of former NFL coaches (Herm Edwards and Marvin Lewis). Because of all that, the Lions expected his transition to be a little shorter than other rookies. Lucas already sounds rather comfortable.

“My knowledge of the game, my work ethic, just being consistent every day — I feel like that’s probably the biggest things I brought from Arizona State,” Lucas said. “It’s just embedded in me, it’s kind of in my blood.”

Saturday, he played almost exclusively out of the slot, which is where he saw a bunch of work during his final two Sun Devils seasons. There’s a good chance he settles in there once the full roster comes to town, too.

• Tryout quarterback Connor Sampson, a Belleville native and Western Illinois product, definitely can sling it a little bit. He’s got a quick release, and he threw several nice deep balls — into a slight breeze — during positional drills. His 7-on-7 work was a little clunky (and brief): two completions on four attempts, plus two “scrambles.”

If nothing else, it helped the Lions have a quarterback here for rookie camp. They didn’t last season, pressing assistant coach Tanner Engstrand into duty. But Sampson’s presence allows the coaches to get a decent look at the receivers and DBs, as well as to run those 7-on-7 sets.

• One cool aspect of this for Sampson: As the only quarterback on the premises this weekend, he’s enjoying exclusive access to QBs coach Mark Brunell and senior offensive assistant John Morton, who joined the Lions’ staff this year after interviewing for the OC gig in 2021.

It’s the same for San Diego State running back Greg Bell, who got 1-on-1 time with Duce Staley during positional drills.

Later, Bell dusted Rodriguez and Houston on consecutive reps during a special-teams “tackling” (read: two-hand touch) drill. After the first win by Bell, Staley danced over toward the defensive line to taunt Rodriguez a bit; after the second, Williams walked out to celebrate with the Lions’ UDFA running back.

• As the Lions started nabbing undrafted free agents, we said to keep an eye on TCU offensive tackle Obinna Eze. That’s still the case after getting eyes on him. He is a presence: 6-foot-6, 321 pound and with a nearly 86-inch wingspan.

The arm length is legit and impressive, and it wouldn’t be a surprise to see the Lions bet on those traits by keeping him around into the regular season. There wasn’t any real live blocking Saturday, but Eze did take reps against both Hutchinson and Paschal.

• A wide receiver (aside from Williams) could emerge from this rookie group over the coming weeks. Kalil Pimpleton out of Central Michigan is small as heck (listed at 5-8, 172 and both might be exaggerations), but he’s tough to cover — he hauled in one of Sampson’s two completions during 7-on-7s, after smoking a DB on a shallow crossing route.

Corey Sutton from Appalachian State is at the opposite end of the spectrum, with size that should play. We’ll see.