Over the last 10 seasons, the Edmonton Oilers invested in Russian players of all types. But from Nail Yakupov to Nikita Nikitin, from Anton Belov to Anton Slepyshev, the organization has been unable to find rapport with Russians.

Perhaps this time will be different.

KHL winger Andrei Kuzmenko has just finished a tour of various NHL cities and the Oilers were on the list and received an opportunity to show off what the organization can offer a scoring winger. Agent Dan Milstein, who also represents Edmonton free-agent forward Evander Kane, will sit down with Kuzmenko over the next several days to make a decision.

There are two main questions surrounding Kuzmenko as a possible solution for the organization. Where will he play? Who does he replace?

The answers are more complicated than it appears at first blush.

Getting intel on Russian players, even those who play in the KHL, is difficult. Most of the time scouting reports are contradictory and less trustworthy than the numbers.

In the recent draft guide published by Red Line Report, a credible read of the player appears. He is listed as being 5-foot-11, 194 pounds and is called “a playmaking winger with excellent speed.” The scouting report suggests his lack of battle level away from the puck is noticeable.

That’s a terrific way to start a conversation about Kuzmenko, the role he might play and where he could land in Edmonton’s batting order. It does have limitations, and there are some contradictions. For a player who isn’t known for checking, his on-ice goal differential at even strength (39-24, plus-15) is strong.

Another way to measure the player is finding recent Russian forwards who have graduated from the KHL to the NHL. Age is important, as is production, and the overall feel of Kuzmenko’s comparables suggests he will be able to score in the NHL. Here are the totals from each man in his final KHL season:

The average boxcars for the three men listed here in their first seasons after coming over (72 games, 20-34-54) suggests Kuzmenko is a good bet for NHL success — especially if he’s playing with Connor McDavid or Leon Draisaitl as his centre.

He is not a physical player by NHL standards.

Where would he play in the lineup?

Kuzmenko is a left winger but shoots right. This is a fairly typical issue when bringing over European players, the first time Edmonton moved a right-shot left winger to the other side was Jari Kurri in the fall of 1980.

It does give the coaching staff more room to wheel, and potentially Ken Holland could have more options over the summer. If Kuzmenko lands on the left side with the Oilers, that probably means Ryan Nugent-Hopkins would move back to the middle next season.

Kuzmenko could play as high as the No. 2 line, but the reports of lack of two-way ability may mean he moves down the depth chart at times. Warren Foegele and Ryan McLeod would be the obvious internal options, although Dylan Holloway could also impact the depth chart with a strong training camp or early season spike with the AHL Bakersfield Condors.

If Edmonton signs Kane, all bets would be off and Kuzmenko would play his minutes with the team on right wing. It would mean an additional need for two-way types on the right side.

Signing Kuzmenko could potentially mean three right wingers capable of scoring 20 goals next season. That’s a positive. It could mean (if the scouting reports are true and the numbers are lying) the organization would be weakening defensive coverage on the top three lines. As a result, Jesse Puljujarvi could be playing in the top six as much or more than Kuzmenko due to his ability to play a responsible game without the puck.

The CBA dictates Kuzmenko’s contract will be one year, with a maximum of $925,000 so the Oilers can afford to sign him this summer. There’s clearly a spot in the lineup where the skilled Russian can play, and it makes sense from all available angles in terms of team building.

Signing Kuzmenko helps the team offensively at even strength and potentially improves the team’s overall speed. It also gives the club more utility (he can play either wing) and forcing Holloway back to the AHL for a time is an acceptable outcome that could benefit development.

Placed in the context of the overall roster, assuming Edmonton re-signs Kane or replaces him with a similar player, the Oilers’ top three lines could all deliver impressive offence.

In Pierre LeBrun’s latest article for The Athletic, he references the Oilers’ interest in Montreal Canadiens winger Josh Anderson. That would almost certainly move a signed Kuzmenko to left wing. It also offers some clues into how the rest of the forwards might fall into place. 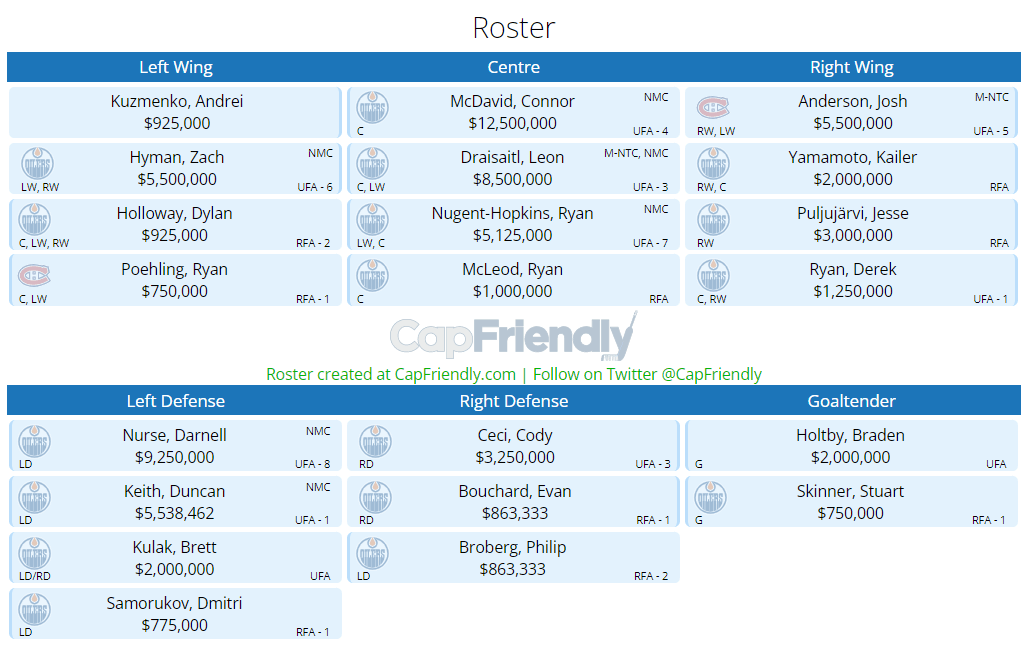 This roster involves a significant trade with Montreal for Anderson, the retirement of goalie Mike Smith and free-agent additions Kuzmenko, Brett Kulak and Braden Holtby.

The RFA estimates are within range, with Daniel Nugent-Bowman’s insight from his Saturday article at The Athletic paving a logical road for a Puljujarvi renewal.

There’s a pretzel logic feel to the roster as shown, and LeBrun’s article suggests other moves that may come to pass.

The bottom line is that Kuzmenko’s addition would create more offence, while at the same time enhancing the importance of responsible wingers like Nugent-Hopkins and Puljujarvi.

It’s blue sky season in a hockey summer, a welcome respite from recent offseasons that took place out of time with a typical hockey calendar.

Day by day, this summer is coming into view. Once again, as is typical for a Holland summer, the forecast is unsettled and clouds are forming.

Kuzmenko is a no-brainer for the organization. If he chooses Edmonton, sign the man and let the coaching staff decide where to plug him in.

It will impact the roster construction, though. Kuzmenko has strengths and weaknesses. Those weaknesses should increase the roles of those who count outscoring and strong possession as strengths.

Paul Pogba: I want to show Manchester United they made a mistake