The Edmonton Oilers’ busy summer has most experts looking for another strong season and a fourth straight postseason appearance.

The trip to the conference finals against the Colorado Avalanche has allowed even the most critical fans a sliver of hope, and the roster changes over the summer have added veteran pieces of good quality.

There are questions that need answers before opening night, though.

The prevailing wisdom goes that general manager Ken Holland has one or more deals lined up as an option to reach cap compliance before opening night. Restricted free agent Ryan McLeod needs a contract, the AAV is likely to land around $1 million.

Names that have been mentioned as trade options include Jesse Puljujarvi, Warren Foegele and Tyson Barrie. Only Foegele has a duplicate talent (Dylan Holloway) pushing up from the AHL’s Bakersfield Condors.

There are ways to get under the cap without sending a player away in trade. If the Oilers sign McLeod for $900,000, move goalie Mike Smith and defenceman Oscar Klefbom to LTIR, sign Sam Gagner to a one-year deal and send veteran Derek Ryan to the AHL, cap compliance can be reached with this roster. 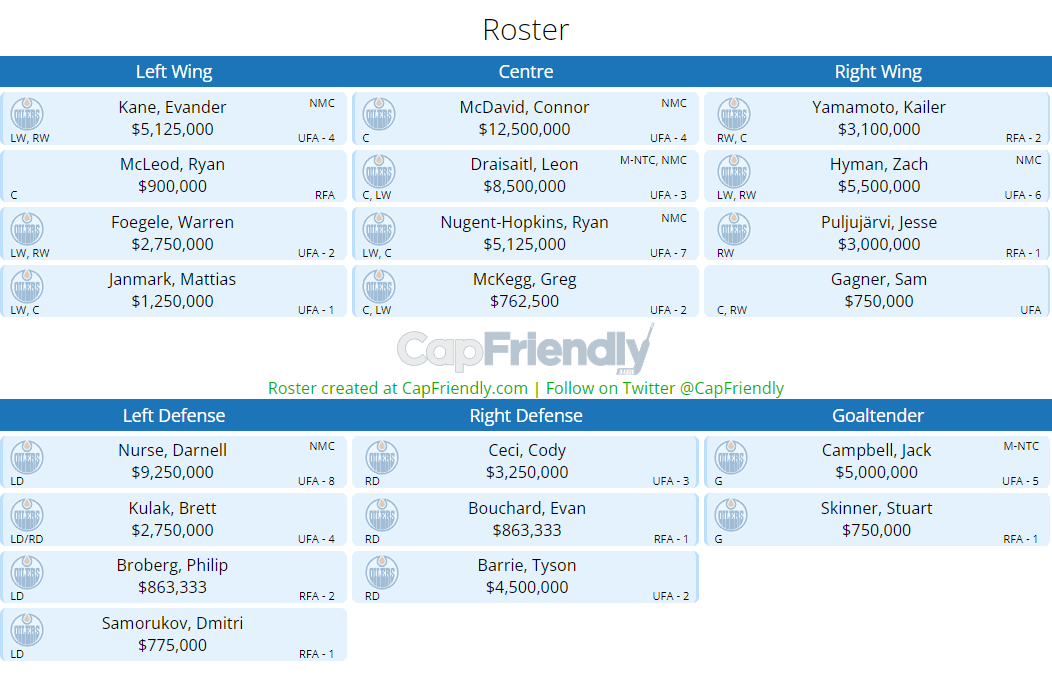 Ryan, Devin Shore and Slater Koekkoek are the NHL players in the minors, Edmonton’s roster is 21 (of a possible 23) deep and has very little room to wheel. Highly touted rookie Holloway is also off the roster, which would have cap implications should he be recalled during the season.

Holland could place Holloway on the roster, send down two players who are likely to clear (Gagner, Greg McKegg) and satisfy the bonus requirement on the contract. Immediately afterward, the Oilers could recall the two veterans, sending Holloway out and avoiding the bonus problem over the course of the season.

A trade remains the likely bet, but the organization can run for a time without making a deal. It’s also possible injuries before opening night would impact the final roster.

The Oilers have several rookie defencemen looking for an NHL job at this year’s training camp, led by 2019 first-round selection Broberg. Among Dmitri Samorukov, Markus Niemelainen and Vincent Desharnais, only one (Samorukov) is eligible for waivers.

It gives him a big edge entering camp, up to and including winning a job over veterans like Koekkoek.

The young Russian defenceman battled injury last season (jaw, shoulder) in what is becoming an annual occurrence for the big man. When healthy, and when placed in a prominent spot (as he was when Broberg and Niemelainen were recalled with coaches Jay Woodcroft and Dave Manson in February), good things happen.

Here are the splits, by head coach, in even-strength goal differential for Condors defenders in the AHL 2021-22. Notice the spike in Samorukov’s numbers when Colin Chaulk took over:

Samorukov, who also delivered an exception goal differential in his KHL season (2020-21), stepped in when Broberg and Niemelainen flew to Edmonton and was a key player on the Bakersfield team through February and March (until he was injured in early April).

If Samorukov performs well in preseason, the Oilers will likely keep him on the roster. He could be a long-term solution. That small wrinkle could impact all of Koekkoek, Niemelainen and Desharnais.

In the roster published above, the Oilers would be counting on three unproven but talented players in positions that should be considered important to a Stanley Cup run: Broberg (No. 3 left defence), McLeod (No. 2 left winger) and Stuart Skinner (No. 2 goaltender).

It’s important for those three men to see playing time. It will give each of them a chance to prove they can play those important roles (all three are excellent bets) through the season and into the playoffs.

At the same time, three youngsters in those roles is plenty for a team with Stanley Cup plans, so the organization needs to evaluate those players and others in the system who could be possible replacements.

If no internal options are able to fill the role, a deadline trade would come into view.

Holland hasn’t yet been able to manage it (William Lagesson plus two picks for Brett Kulak doesn’t count) in Edmonton, but it’s possible to create trade value during the season and then cash it at the trade deadline.

A player like Samorukov might be a dear price to pay for the Oilers, but if the ask is one of the 2023 draft picks, adding Samorukov into a deal may mean keeping a more valuable selection.

The king of this kind of pump and dump was Sam Pollock of the Montreal Canadiens. He would elevate a talented but unproven player and place him on a feature line (Guy Charron with Jean Beliveau and Mickey Redmond just before the Frank Mahovlich trade) to increase perceived value on a player.

The Oilers do not boast a lush farm system, so value will need to be created in some way. Pushing a youngster up the depth chart for a few weeks could result in a successful deal.

Will Holland win a September trade?

The key to success in any negotiation is indifference to the outcome. No matter how well you play poker, there’s a tell. In the Oilers’ case, it’s clear winning the Stanley Cup is the goal, and the window of opportunity runs until Leon Draisaitl reaches free agency.

That’s three more seasons, the big man is unrestricted in the summer of 2025.

Any trade by Holland before the season, and absolutely any trade at the deadline, will involve sending out future assets of great quality for sudden impact players for the season and postseason to come.

Winning the Stanley Cup means giving up quality talent in trade. If Edmonton wins in 2023, 2024 or 2025, one would expect few complaints about value lost in a trade that aided the cause.

If Holland and the coaching staff want to start the season with 22 men, and get all three bonus contracts on the roster opening night, there is a way. If Foegele is dealt for no returning money as part of the asset, the team can add Holloway to Broberg and Evan Bouchard in satisfying all bonus issues for the year. 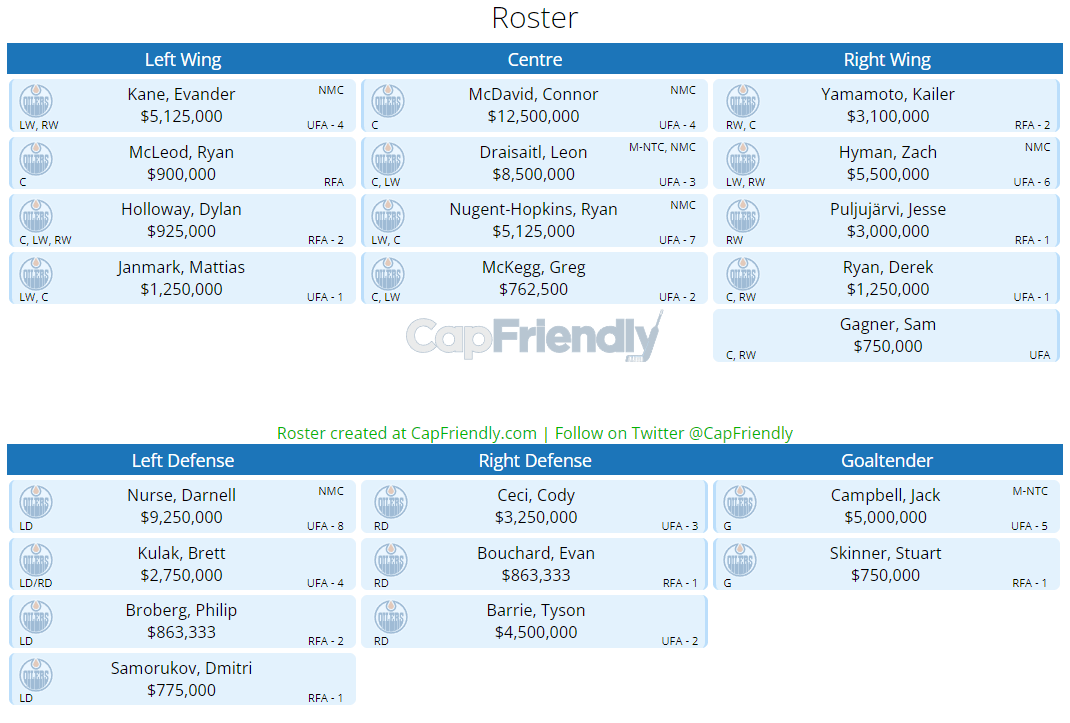 Along with all the usual problems that will need to be solved before the season starts, figuring out the penalty killers is an important piece. Woodcroft and Manson used Ryan for 1:27 a night, Ryan and his teammates giving up 8.3 goals per 60 and 50 shots per 60 shorthanded.

Players used more often (McLeod, Ryan Nugent-Hopkins, Zach Hyman) by the new coaching staff gave up between 3.5 and 4.0 goals per 60 and also had better shot rates than Ryan. It did appear at times that Kailer Yamamoto was emerging as the fourth option, but NHL coaching staffs like to have plenty of room to use different penalty killers.

Ryan may emerge as a bubble roster player through no fault of his own. The cap hit lands in Edmonton’s sweet spot and that could impact him.

Oilers fans who were focused on Holland winning a trade this summer are likely waiting to be satisfied, although the Zack Kassian trade allowed the team to add some quality free agents.

The nature of Edmonton’s situation lends itself to useful pieces being added at the expense of futures. Kent Nilsson arrived for a pick that turned into Link Gaetz, Dwayne Roloson cost a first-round selection that turned into Trevor Lewis.

Finding an Oilers fan who regrets either deal would be difficult if not impossible. Whatever may come, the price will be dear, the return must have an impact and the cap must be satisfied.

Holland is counting on those youngsters. Watch for Broberg, McLeod and Skinner; if they are successful, Edmonton could go a long way.