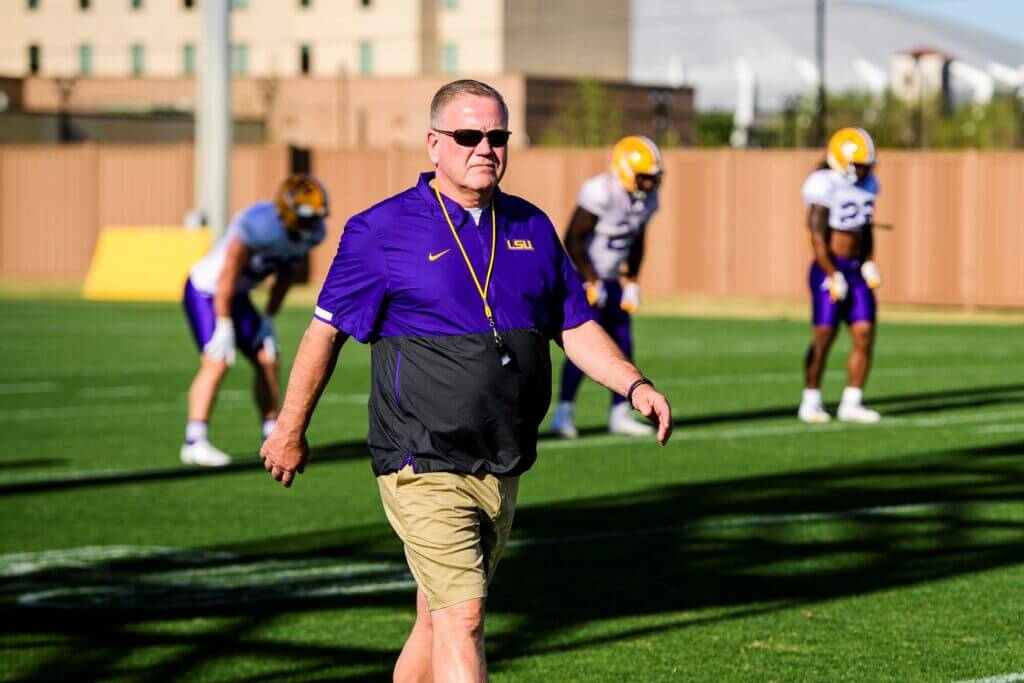 BATON ROUGE, La. — Brian Kelly stood 10 or so yards behind the action for Thursday’s first day of LSU camp in a white visor, purple windbreaker and shorts. He takes a bird’s eye view to practice, monitoring coaches’ teaching points and how drills are set up.

But he’s also forced to do a little more watching and evaluating than he normally would this far into the schedule, because this is a different sort of year for Kelly. Normally he knows a roster inside and out. There’s a general pecking order in mind.

“You always have a guy penciled in somewhere,” the LSU coach acknowledged Thursday. “There’s not a lot of penciling in yet.”

This is an offseason of new: new coach at a new job in a new conference. But even more than that, it’s a new roster with 15 transfers and several freshmen thrust into rotational roles. Everything is still getting figured out on the fly. So Kelly said LSU still has to rely on evaluations throughout camp to make decisions, which he said is different for him.

This in turn makes it a more interesting camp than usual, because the team that takes the field Sept. 4 in New Orleans will truly be carved out of what happens these next four weeks. There are countless position battles still being sorted out — particularly at quarterback, offensive line and cornerback — and a roster full of players Kelly has barely seen.

“There’s some work to be done,” Kelly said with a slight smirk.

But camp has begun. Here’s what stood out.

Tre Bradford no longer with team

For the third time in two calendar years, running back Tre Bradford has left a football program. The third-year running back is no longer on the LSU football team, and Kelly could only say:

“Tre has been separated from the University, and there are a couple of laws that I cannot get into specifics there. But he is no longer on the roster.”

A University spokesperson also had no comment on Bradford. The former four-star prospect out of Texas transferred from LSU the summer after a freshman season that included a clutch touchdown against Florida. He landed at Oklahoma, only to leave again months later to transfer back to LSU on Sept. 7, with the season underway.

Bradford missed most of the 2021 season with a hamstring injury, but he impressed this spring with a few impressive plays during LSU’s spring game. Now, he’s gone, and LSU will rely on a thinner running back group of John Emery, Noah Cain, Armoni Goodwin and Josh Williams.

The conversations between Kelly and offensive line coach Brad Davis haven’t stopped, continuing into LSU’s first practice as they try to figure out a plan of action for an offensive line in flux.

Davis has focused on cross-training players across multiple positions, something Kelly agrees with as he wants flexibility to move players around when needed. But other than maybe true freshman Will Campbell at left tackle, there’s not a single starter cemented into a spot. Kelly has repeatedly said he likes the depth LSU has built up front, but creating an actual pecking order is a different challenge.

For example, FIU transfer — and The Athletic Freshman All-American — Miles Frazier has been paired on the right side of the line with redshirt junior Anthony Bradford. Frazier was at guard Thursday with Bradford at tackle, but Kelly said LSU likes both at either guard or tackle.

“So we’ve paired them on the right side, because we think that they’re interchangeable,” he said. “We like that Bradford has some really good feet, but Frazier has some length.”

Bradford, at 6-foot-5, 345 pounds, has been a tantalizing but frustrating prospect for years in Baton Rouge. Coaches from both the Ed Orgeron and Kelly staffs have been excited by his quickness, flexibility and upside, but he’s also struggled with weight and discipline throughout his career. Hence having just five starts in three years and being pulled multiple times. There’s optimism he’s turned a corner in Year 4, and this camp will be telling.

Others to watch are junior Marlon Martinez and sophomore Garrett Dellinger. They were two young success stories of LSU’s troubled 2021 season and are expected to make a leap this fall, but both missed spring with injuries. Kelly said Martinez and Dellinger are currently focusing on guard and center. Center is another wide open battle, with senior Charles Turner taking most of the first-team reps in spring.

“It’s important that there’s some flexibility here for the first two, two and a half weeks, and we’ll build the starting five,” Kelly said. “I think it’s gonna take a little while for it to pan out.”

Boutte adapting to practice under Kelly

The sneaky storyline of spring was Kelly publicly calling out his preseason All-SEC star receiver, beckoning Kayshon Boutte to be more active and involved with the team while he recovered from two ankle surgeries. Since those public comments, Kelly awarded Boutte with LSU’s prestigious No. 7 and acknowledged trust has been built.

Because of the injury, Thursday was Boutte’s first practice under Kelly, and the coach acknowledged he had to get on Boutte once or twice about “how to practice the right way.”

“But he’s so committed,” Kelly said. “He’s worked so hard. I’m excited for him, really, because you can see his potential is one of — can he be the best receiver in the country? I think he can be.”

Kelly has a history of pushing talented receivers and asking more of them. He often talked of former Notre Dame star receiver Michael Floyd as someone who needed to learn to practice the right way and cut down on sloppiness.

That isn’t to say Boutte requires the Floyd treatment, as Kelly said Boutte’s GPS tracking output was more than they expected of him his first practice back. All signs point to him being on track for a healthy 2022.

• Harold Perkins, the star prospect of LSU’s 2022 class with a No. 8 national ranking, made his practice debut Thursday. Kelly noted of the freshman linebacker: “You get flashes seeing him. I went over watching tackling drills, and he has a suddenness to him that is quite different from some of the other players.”

• On the quarterback battle, Kelly said you won’t see much separation the first seven days as LSU goes through its acclimation program. “That will begin to start taking shape and form as we get to down-and-distance situations,” he said. These first few days are dialing up almost every play that’s not down and distance specific. Then they begin to narrow down to situational football, which is when Kelly can start seeing play calling situated for each quarterback.

• The roster is healthy overall, with formerly injured players such as corners Jarrick Bernard-Converse and Sevyn Banks and linemen like Martinez and Dellinger back in action. The only two limited players, Kelly said, were receiver Jack Bech (shin splints) and freshman linebacker DeMario Tolan (diskectomy). Neither is far from returning full time.

The deaths of Aboriginal women must spark outrage – and change