On July 15, 2000, Luis Figo picked up his phone and asked a journalist for a favour.

Barcelona’s brightest star then invited a Catalan reporter to join his family holiday in Sardinia so he could articulate spell his thoughts amid the growing speculation that rivals Real Madrid would attempt to sign him. The interview ended up with an explosive front cover.

“No to Real Madrid” and “I am only going to play for Barca” were the headlines.

Nine days later, the Portugal winger, then 27, was posing in Spain’s capital with a Real Madrid shirt, next to freshly-elected president Florentino Perez and club legend Alfredo Di Stefano.

This was the end of arguably the wildest transfer saga the football industry has ever seen.

It was a tremendous battle of narratives and media pressure with the aim of achieving power and recognition. It was also the move that introduced Perez to the football world, produced the first “galactico” and created a wound that will never heal in Barcelona. It hurt feelings and boosted egos to the extent that, more than two decades on, Netflix have dissected it in a documentary, The Figo Affair.

Luís Figo. Florentino Pérez. 22 years later, the people at the centre of one of Europe’s most controversial football transfers tell their stories.

The Figo Affair: The Transfer that Changed Football, coming to Netflix 25 August. pic.twitter.com/7G1yMEVHiw

It’s been 22 years now, after all. That’s probably enough time for Figo, his agent Jose Veiga, former footballer and intermediary Paulo Futre and Perez to speak out about it. They are some of the main voices that examine the ignition of the conspiracy and every plot twist and coup behind the scenes as Figo went from being adored to Barcelona’s worst public enemy.

“Getting Figo on board was a tough and slow process,” says the documentary’s co-director, David Tryhorn. “Eventually, as we were doing the interviews with him, it was about convincing him to open up about the transfer. Whether he truly opens up… I’m not 100 per cent sure he does, but he was unbelievably helpful. He was the guy that enabled us to get Florentino, and put us in touch with Jose Veiga and Paulo Futre.”

On July 24, 2000, Real Madrid paid the £50million (then around $71.5m) release clause in Figo’s contract, which broke the £38million record set by Italian striker Christian Vieri when he moved from Lazio to Inter Milan the year before.

From 1996 to 2001 there was a transfer world record-breaking fee every summer, but Figo felt different. This was groundbreaking; a move involving two of the biggest clubs and fiercest rivals, as well as a player who would win the Ballon d’Or later that year.

It was also a reminder of how big stars are crucial to a club’s strategy and a wake-up call in the role of powerful agents and executives. If they had been able to make Barcelona’s best player join their fiercest rivals out of the blue, what couldn’t they do?

Figo was loving life in Barcelona, as his former team-mate Pep Guardiola explains in the film. Fans idolised him as one of the world’s best players and he could empathise with the club’s ethos. After he won his first league title, he rallied against Real Madrid in front of his hundreds of fans when chanting, “Blancos, you toddlers, salute the champions!”.

But Camp Nou had not seen a more brutal and violent atmosphere than the one that erupted on October 21, 2000 — the first day Figo put a foot in Catalonia with a Real Madrid shirt on. 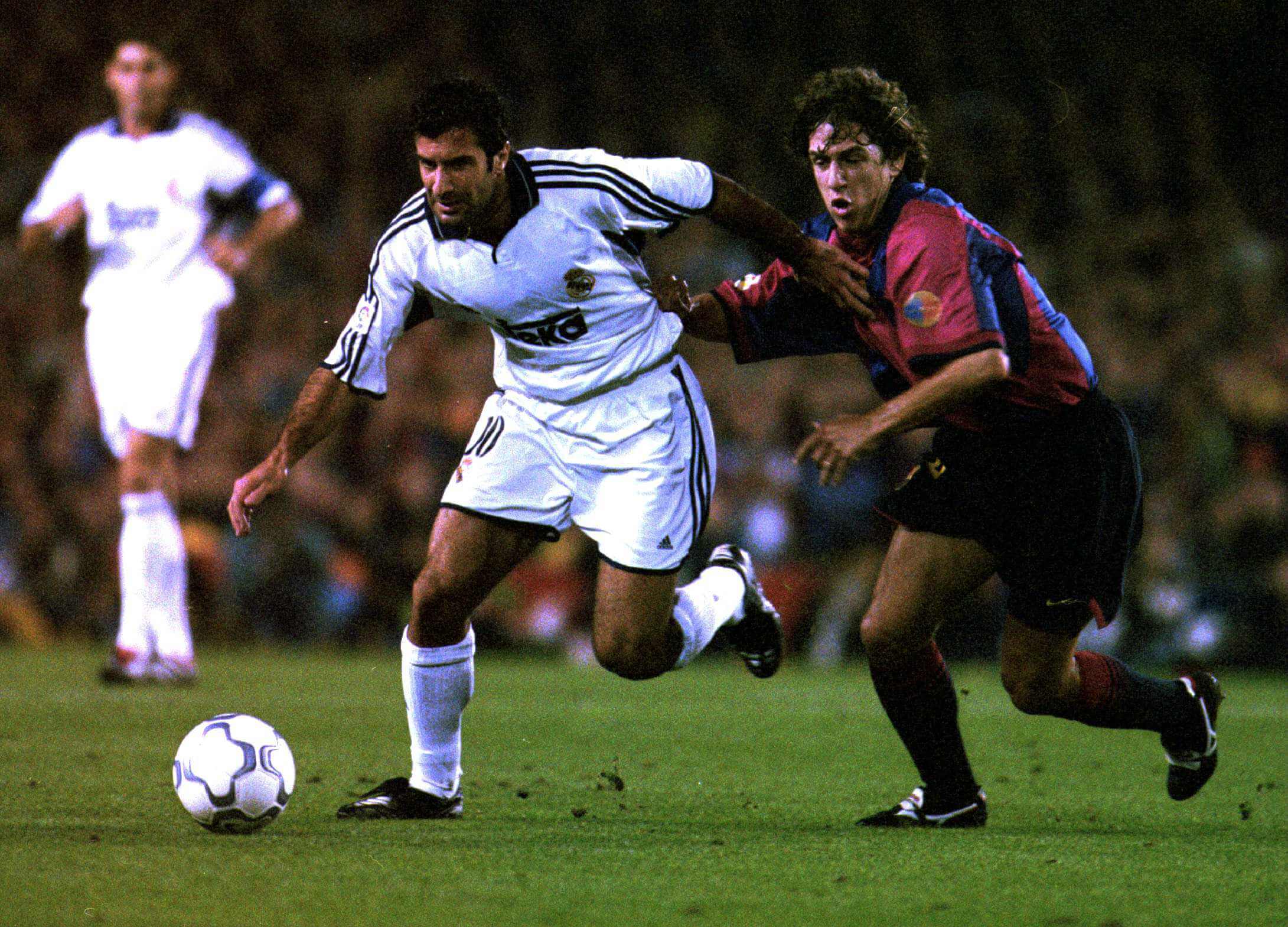 “When we warmed up and saw that atmosphere, I’d have been happy if the referee decided to call off the game,” former Real Madrid full-back Roberto Carlos recalls.

Glass bottles of whisky were thrown into the pitch. Every time Figo went to take a corner, the game needed to be stopped due to items flying towards the footballer. Local papers gave away fake bank notes with Figo’s face printed on them and he was welcomed to his new hell with cries of “Judas”, “traitor” and “money-chaser”. 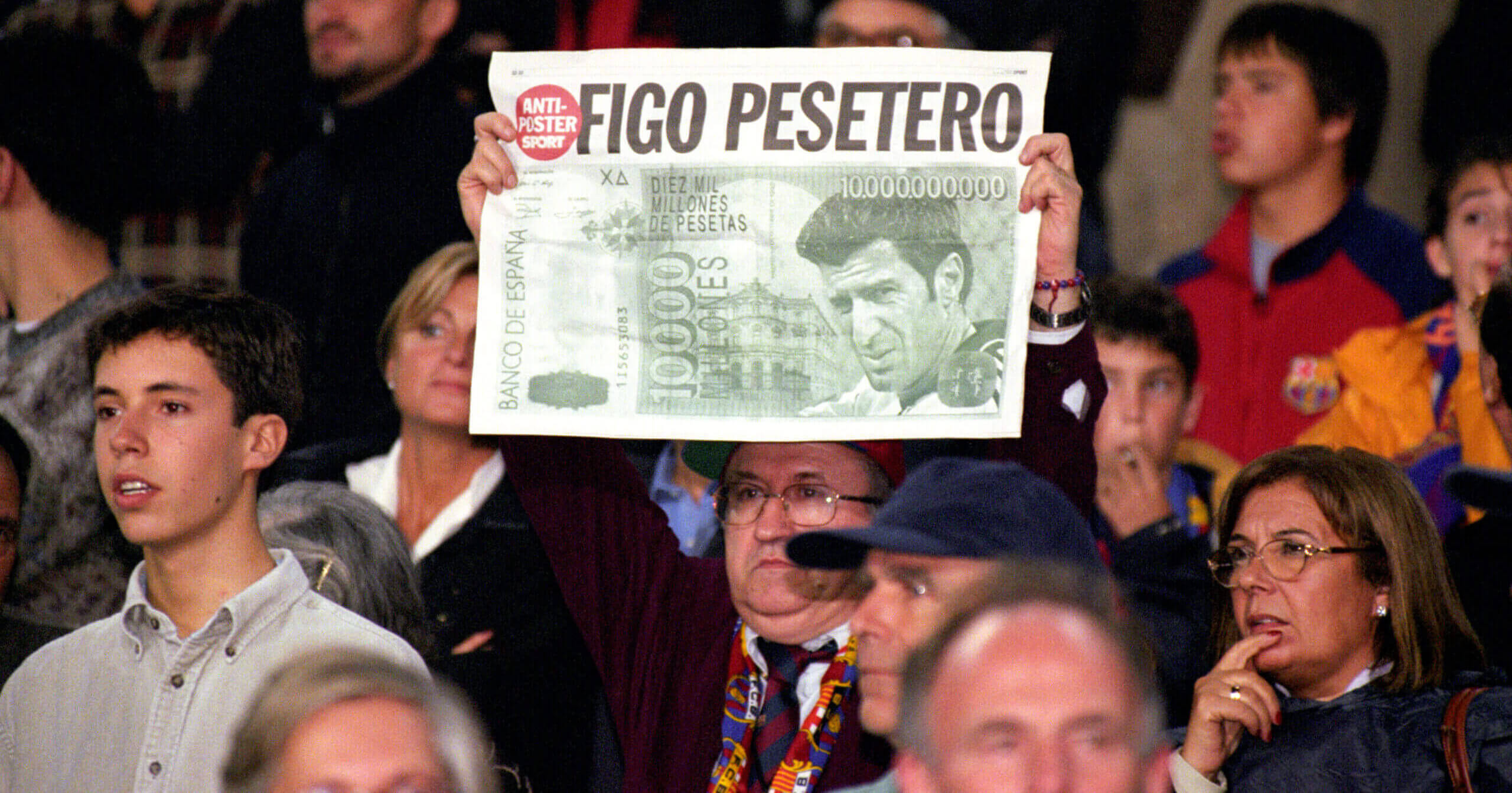 A generation of Barcelona fans will never forgive Figo’s words of loyalty to their club and then his abrupt U-turn as soon as Perez was named president of Real Madrid.

“Money it’s always an honest motivation,” says co-director Ben Nichols, and rightly so. It was money that set the wheels turning with massive agent fees and it was money that prevented Figo’s camp from calling it off when they were starting to have second thoughts. Some deals are too big to fail.

The film does not come across as an attempt to sanitise what happened, though, and Figo does not hide his aspirations of feeling better valued at Barcelona, a year after his last contract extension. The same applies for the agents, Veiga and Futre, whose eyes started rolling as soon as they found out the amount of money involved. It is fun to see how the main actors contradict themselves, despite having benefited from what occurred, and how there are still some grey areas that aren’t clear to all of them. 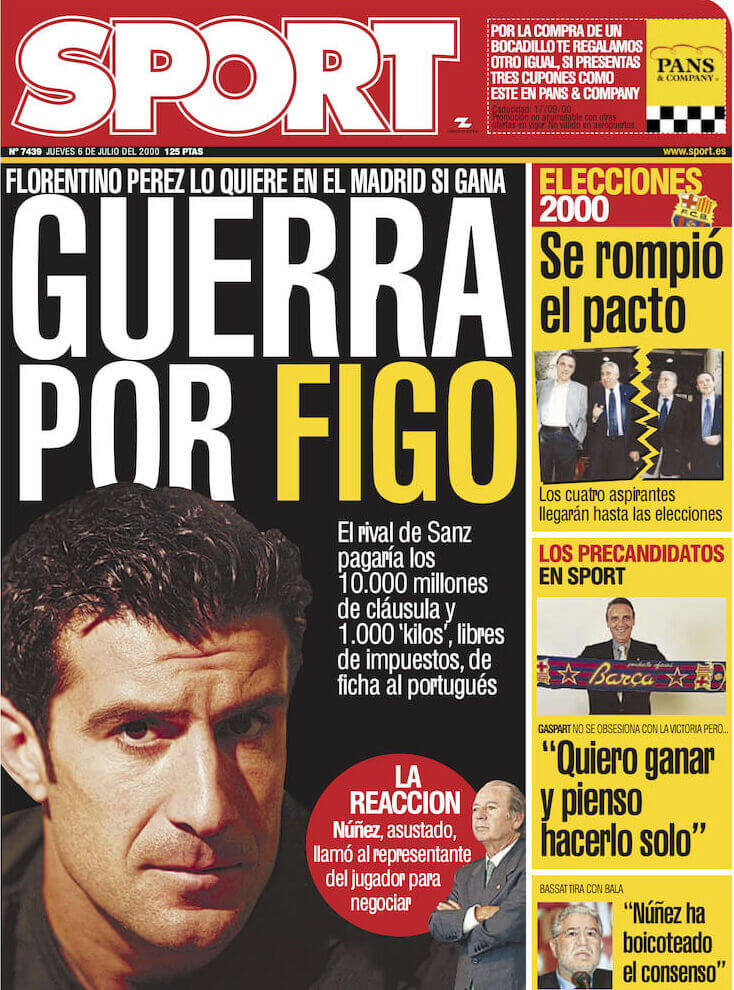 And, of course, there’s the ruthless Perez.

There was a huge political element to the Figo deal too. The Barcelona star was the price Perez had to pay to complete an impossible job: convince the Real Madrid socios to vote for him in 2000 to win the elections over Lorenzo Sanz, the president who had secured two Champions League titles in the last three years.

“Florentino knows he has to do something massive to win the elections and he’s clever enough to create the narrative that’s going to produce a bomb that will just blow up everyone else away,” says Nichols.

“There’s also what creates Florentino Perez with journalists and the media, the whole summer saga. The power of the narrative is going one way, with Figo desperately speaking to Barcelona media to turn it back the other way, but there’s the feeling that when the story started it had gone into fans’ heads that Perez might be able to pull this off.” 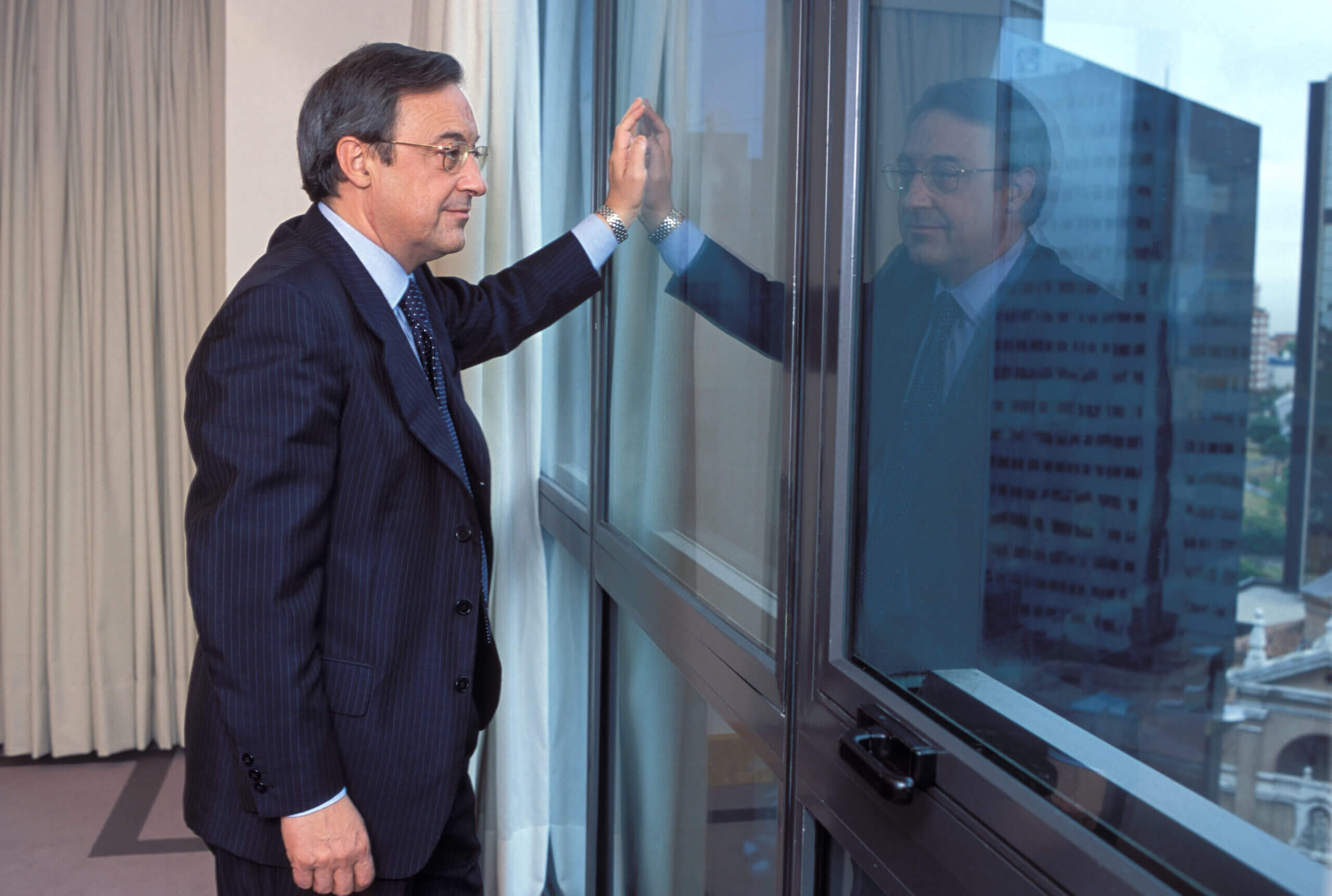 He did indeed pull it off, and you can still sense some indulgent nostalgia in his words when he talks about the Figo saga. There’s not any sign of regret, as you could expect.

“I always tell Luis that, with him, everything started,” Perez states in the documentary, holding a half-smile.

It’s the kind of look you get from someone who knows but can’t tell the full story, while they want to lay out their side of it.

“I don’t think we’ll ever get to the absolute bottom of it,” says Tryhorn. “The interesting thing is all those guys probably believe they’re telling the truth. They each have their story and possibly have told it so many times they believe it’s real.”

Where the money Perez used to pay Figo’s release clause came from is not explored in the documentary, maybe because the angles on that particular aspect are endless.

Futre, an Atletico Madrid legend, helped Real Madrid to get things sorted. In 2016, Veiga was arrested and spent three months in prison and a further two under house arrest in Portugal after an investigation into money laundering and tax evasion. He denied all the allegations against him, saying everything he had done was legal.

Their stories would probably make a good spin-off from this absorbing story.