We go again. You’ve had your summer of enjoying back-to-back Premier League titles and four out of five but that’s all in the past. Now it’s time to worry about transfers and begrudge every Liverpool win. Fun, isn’t it?

So, as another season of wonderful Pep Guardiola football at Manchester City begins this weekend, let’s have a little look ahead to what we’ll all be talking about for the next 10 months.

It turns out that a lot of it concerns Erling Haaland.

Such are the standards around City these days, it would have to be winning the Premier League again at the bare minimum. A lot of City fans — probably a majority — still prefer being top of the pile domestically to chasing the Champions League, but given Haaland’s arrival this summer, there will be external pressure to finally conquer Europe.

So winning at least one of the big two trophies would be a good season — which goes to show the levels they’ve set themselves.

‘Only’ winning one of the domestic cups. Heaven forbid, they don’t even manage that.

Liverpool. Because they’re so good and so relentless, perhaps in a similar way to in 2019-20, when City had won the previous two titles but couldn’t sustain it for a third year. Or perhaps Liverpool only win the league by a point next time.

Looking slightly closer to home, maybe the number of changes to the squad? Or if they don’t sign a left-back?

Or maybe nothing undoes them, seeing as they haven’t signed a left-back in ages and didn’t sign a striker last summer.

Player who will impress the most?

A bit like the “good season” expectations, Kevin De Bruyne’s standards are so high, but he always seems to live up to them. Maybe Haaland continues his goal blitz from playing in Austria and Germany and he’ll be the one, and that’s certainly possible, but De Bruyne has been in the PFA Player of the Year conversation in each of the past three seasons, winning two of them.

Obviously it’s Haaland, but Julian Alvarez is a very exciting prospect. Maybe it takes the Argentinian time to adjust to life in a new culture, club, league and hemisphere, and maybe the Norwegian gets all the headlines, but Alvarez looks made to play in a Guardiola side and he might not fly under the radar for too long. 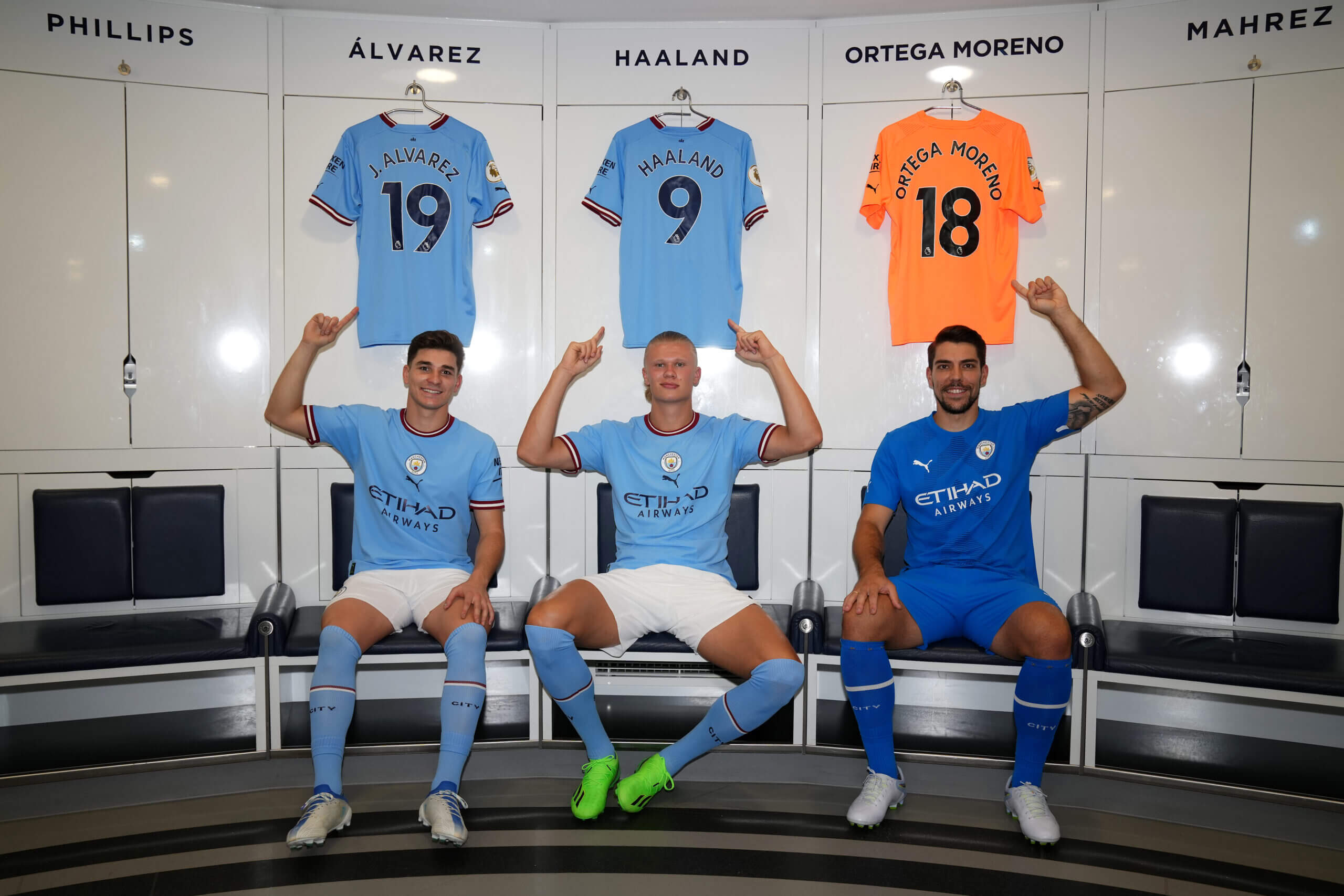 Alvarez, a new arrival at City along with Haaland and goalkeeper Stefan Ortega, could be one of the signings of the summer (Photo: Matt McNulty – Manchester City/Manchester City FC via Getty Images)

Player with the most to prove?

Maybe Haaland, given the almost global expectation that he will thrive in City colours.

The reaction to his goalless performance in the Community Shield last weekend shows just how eager many will be to see him falter (which is par for the course when you move to a big English club) and, while a player of his pedigree could surely argue he has nothing to prove, there will certainly be a lot of pressure on those broad shoulders.

Song the fans should sing that they don’t?

*not even sure this is true or a real thing.

Yeah… it’s not ideal. But nobody seems to know, do they?

City will have the vast majority of their squad on duty in Qatar come November (right now, it looks like only Haaland and Algeria’s Riyad Mahrez won’t be going), but it will be a similar story for other clubs in the title picture.

Should be in the England squad but isn’t?

That’s not really how it works for City, given all their senior English players are in it and pretty big roles for Gareth Southgate. You could say Cole Palmer, but it’s pretty understandable why a 20-year-old attacking midfielder with a handful of City appearances to his name hasn’t got the nod. Yet.

That’s what I’d pick, with the usual extremely honourable mentions to John Stones and Ilkay Gundogan and the potential for Alvarez and Jack Grealish to make a splash. I suppose there is an argument that City’s best team has a false nine in it and not Haaland, given the success they’ve had, but that can’t be right, can it?

China not in control of US 'travel schedule', says Nancy Pelosi after Taiwan visit – video