It seems like an obvious thing to say but Manchester City could probably do with an early goal (or two) against Aston Villa on Sunday to settle any final-day nerves.

Their equation is simple: beat Villa and they win the Premier League title. There are bound to be nerves in the stands, and possibly on the pitch, so an early goal would be the ideal scenario.

Fortunately for City, early goals have been a feature of their season. Alongside the Blackburn Rovers title winners of 1994-95, this season’s City side are joint second in the all-time list of Premier League goals scored in the first 15 minutes of matches, with 18. Those have come in 15 different matches.

The team top of this particular table is Guardiola’s City side of 2018-19, which held off Liverpool all the way to win the title three years ago.

If City were to get a couple on Sunday, they would top this table, too.

It is a statistic that Guardiola wasn’t specifically aware of when asked about it, suggesting it’s not that big of a deal for him and his side, but he did give some reasons for their early goals.

“It’s because the players start focused, in a good rhythm and know exactly what they have to do, and they did it,” he said.

“In our team and the way we play, if we can take advantage it’s so important that we can manage the pace and rhythm that we have to play the game.”

They have scored early goals in many games during the title run-in, including against Burnley (five minutes), Liverpool (five minutes), Watford (four minutes), Leeds United (13 minutes) and Wolverhampton Wanderers (seven minutes) since the start of April. They scored against Real Madrid after two minutes, and against Newcastle United after 19.

That means an early goal in seven of their last 13 matches at the business end of the season.

The 2-2 draw against Liverpool at the Etihad Stadium in April is the only Premier League game this season where City have scored early and not won, which means that there have been 14 wins and one draw. 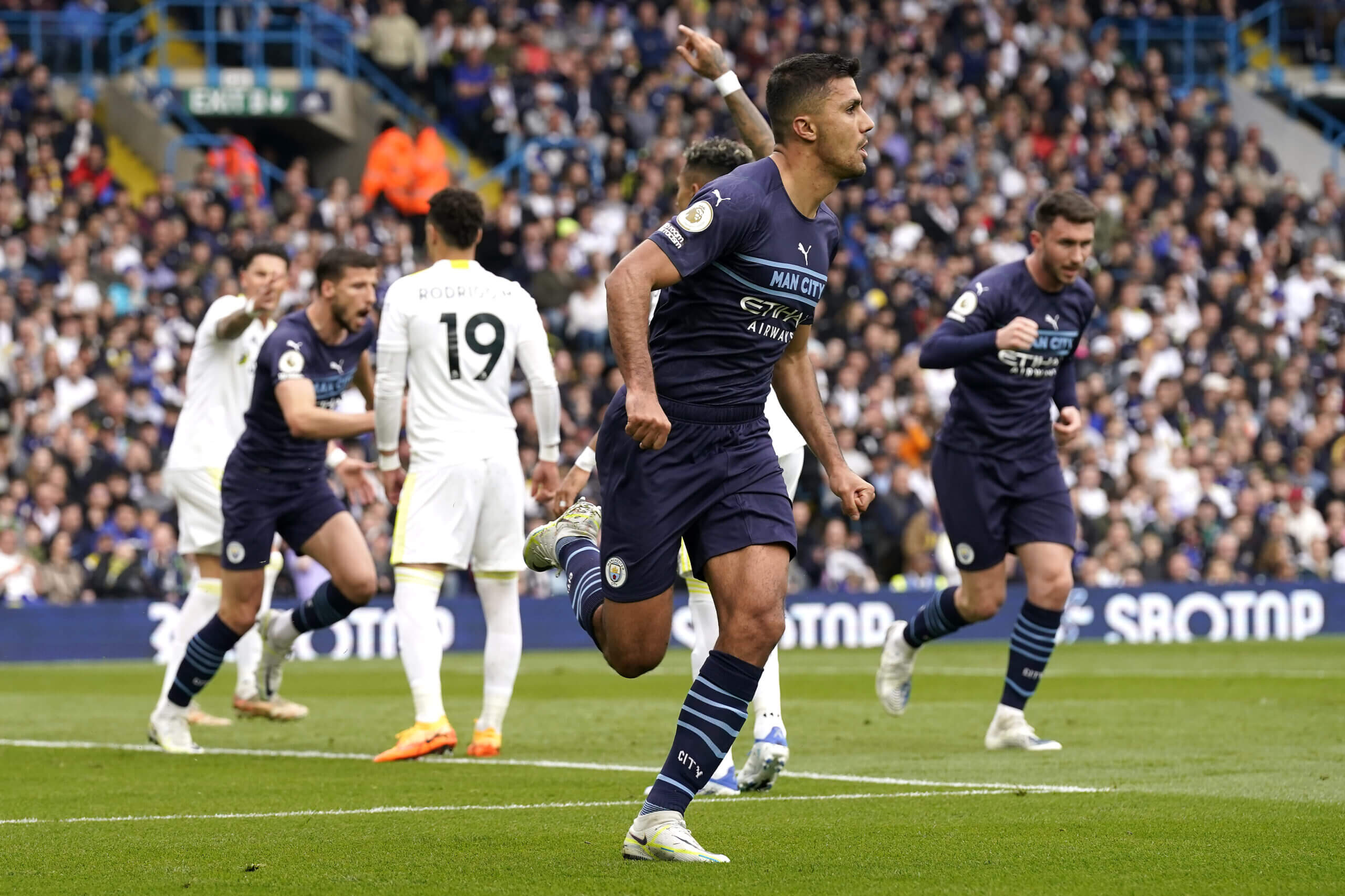 Despite their penchant for fast starts, City have recorded another 13 league victories even when they don’t immediately get a breakthrough, which should provide some reassurance to their supporters watching on Sunday even if the opening is a little more nervy than usual, and there’s a decent chance of that given what’s at stake.

There might even be a setback, and this is something Guardiola preferred to focus on when asked about striking early.

“Sometimes, I’m more concerned about how we react when we concede a goal and how we play in the bad moments than the good moments,” he said before the West Ham United game last week. “The big teams are always defined in that way.”

The 2-2 draw at West Ham had plenty of less desirable features from a City point of view, particularly their defending, but ultimately they were 2-0 down at half-time and they rescued a point, which means all they have to do on Sunday is win, without an eye on how many goals Liverpool might put past Wolves.

City also battled back from a goal down against Arsenal on New Year’s Day for one of the biggest wins of their season, and against Paris Saint-Germain in the Champions League group stage.

They were trailing twice at Anfield earlier in the season and fought back for a draw, they got a point away to Southampton after falling behind and last season, their run to the Champions League final featured wins against Borussia Dortmund and PSG after falling behind.

Given City have only dropped points from a leading position once in the league all season (not just with early goals but with any goals), the inevitable flip side is that almost all of their dropped points have come in games when they’ve never been in the lead, a sign that they can struggle to get themselves back into matches after conceding.

That does sound worrying, although they are still top of the table, and given the magnificent Liverpool team chasing them have dropped points on 10 occasions compared to City’s nine, it shows that even these two fine teams can’t win every week.

Is there a good way to drop points in a title race like this? Not really, although for comparison’s sake, Liverpool have been behind seven times when they have dropped points, coming back to get five draws and losing the other two. Six of those seven matches were away from home. On three occasions, they have been ahead and let the game slip, with two of these at Anfield: against City and against Brighton, where they were 2-0 up. They were also 2-0 up against Chelsea at Stamford Bridge, the only away game they were leading but didn’t win.

The bottom line here is that these teams win far more often than not, and unless there’s a 1995 scenario where the top two slip up at the same time, City and Liverpool are heavily fancied to get one more W on the board.

City could make it easier on their fans by settling the nerves early, but ultimately any win will do. As Sergio Aguero would tell you.