As Kieran Trippier’s free kick settled in the back of the net and the baying St James’ Park crowd erupted once again, it felt as if there was simply nothing Manchester City could do to turn the tide.

It was 3-1 at that point, a few moments after John Stones had been booked for bringing down Allan Saint-Maximin, the afternoon’s star performer.

Stones and Kyle Walker in particular were give a torrid time by the Frenchman, who would win the Ballon d’Or if he could do this a few more times a season. He was that good yesterday.

And City were that disjointed.

Newcastle swarmed them. Pep Guardiola’s inverted full-back model seemed to have had its day, with Walker flailing in possession in midfield (as many of his team-mates did) and then having to sprint out wide and flail some more as Saint-Maximin ran at him.

City stuck with it at half-time and made no substitutions — Guardiola would never bring somebody into this madness out of choice — and no obviously perceptible positional changes. When Trippier made it three within 10 minutes of the restart, that seemed folly.

Maybe we should have seen it coming. City pulled themselves back from the brink of sporting disaster when they found themselves 2-0 down against Aston Villa on the final day of last season to ensure they won a title race that they had led for so long. But they weren’t quite such a shambles that day, and they were at home — not in this north-eastern cauldron of noise, with 50,000 people geed up by their players’ efforts and the perceived injustices of refereeing decisions. 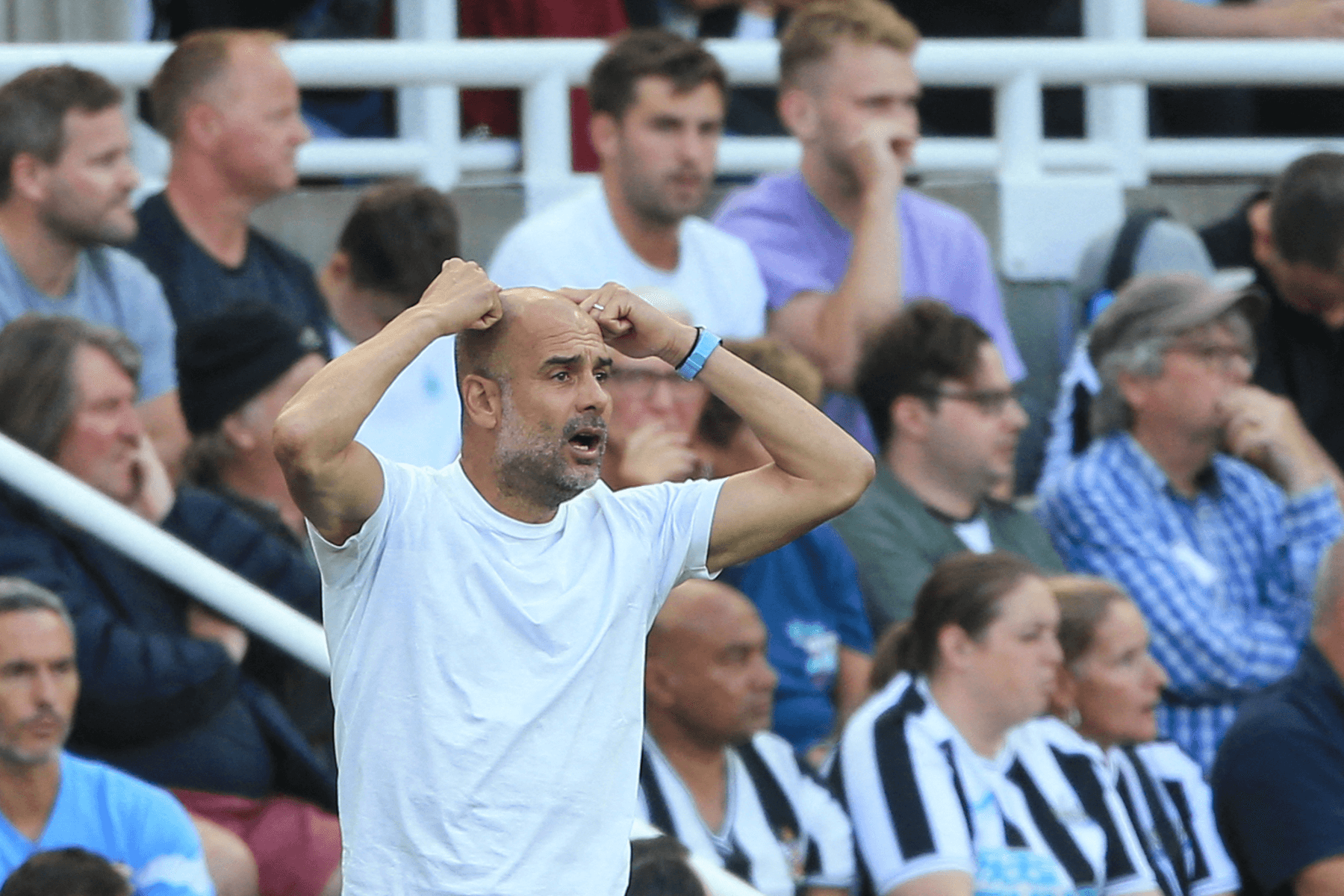 It seemed at one point that champions City would lose their heads in Newcastle (Photo: Getty Images)

Whatever it was, City seemed caught in the eye of the storm with no way out.

And then they managed it.

“A proper game,” Guardiola called it. Had he lost hope when it seemed like destiny was carrying Newcastle to this most frenetic of early-season wins?

“After what happened against Aston Villa,” he said, “in five minutes we scored three goals, I can rely on everything.”

It wasn’t quite that barnstorming a finale. City didn’t get the fourth goal that either side could so easily have found at different points of the game, but Guardiola will have headed home happy.

“I think it’s really, really good for us to live these kind of experiences,” he said. “We spoke about that at half-time — ‘We need to live this, 2-1 down, let’s see what happens now, how we are as a team, let’s go’.”

Within 20 minutes of Trippier’s goal to put Newcastle two in front it was 3-3 and the England full-back thought he had seen red for bringing down Kevin De Bruyne as City rampaged forwards from a goal kick.

Saint-Maximin had taken on the entire City team again, the stadium was on its feet, but his shot was tame. No sooner had it gone out of play than Ederson had got it and played it to De Bruyne. Who was at left-back. He raced forward with a wealth of options ahead of him, Trippier cynically cut him down and was sent off, only for VAR to review it and referee Jarred Gillett to look at the pitchside monitor and determine that it wasn’t quite serious foul play. A grey area, for sure.

But that summed up where the game was at by that point. It barely stopped for a moment.

Before Trippier’s goal, City had came so close to equalising. Ruben Dias strode forward, as he did several times in that second half, and from an extremely advanced position he found Erling Haaland.

The striker took possession, made sure he never lost it, set off for goal and forced Nick Pope into a marvellous finger-tip save. “England has an excellent goalkeeper there,” Guardiola reflected.

Within seconds, Saint-Maximin was earning that free kick and Trippier was scoring from it. It was the story of most of the game.

Guardiola was able to decode some method in all the madness.

“The only problem is that when we break the lines and we can run, if you finish the action it’s not a problem, but if you don’t finish, you don’t control Saint-Maximin and (Miguel) Almiron,” he said.

“We should spend more time in the final third, give more passes in that moment, but it’s difficult because Erling is going, Phil (Foden) has this aggression to go. If Jack (Grealish) plays there or Riyad (Mahrez) or Bernardo (Silva) play on the right, they are more calm and they help us to be all together, and when we lose the ball, we are there and they (the opponents) cannot run.

“And in the first half the problem was, because the control was like this, in actions when we can run, we lost the ball, the back four is still so far away, they contact with a few players and Saint-Maximin can run and we have to defend (just) with Ederson, there’s no other option that we have. That was a little bit the problem that we had today, but sometimes it happens.”

It’s an interesting one, that.

Guardiola mentioned several times how City created so many “one against one” chances. Haaland set De Bruyne away for one in the first half, De Bruyne returned the favour at 3-2. Pope foiled both.

City had 10 shots on target, but the game ended 3-3. That equation does not stack up and they will need to find a way to find their balance again, to not let these matches turn into NBA games, with the teams taking it in turns to attack.

That’s not how City have won so many trophies in recent years. 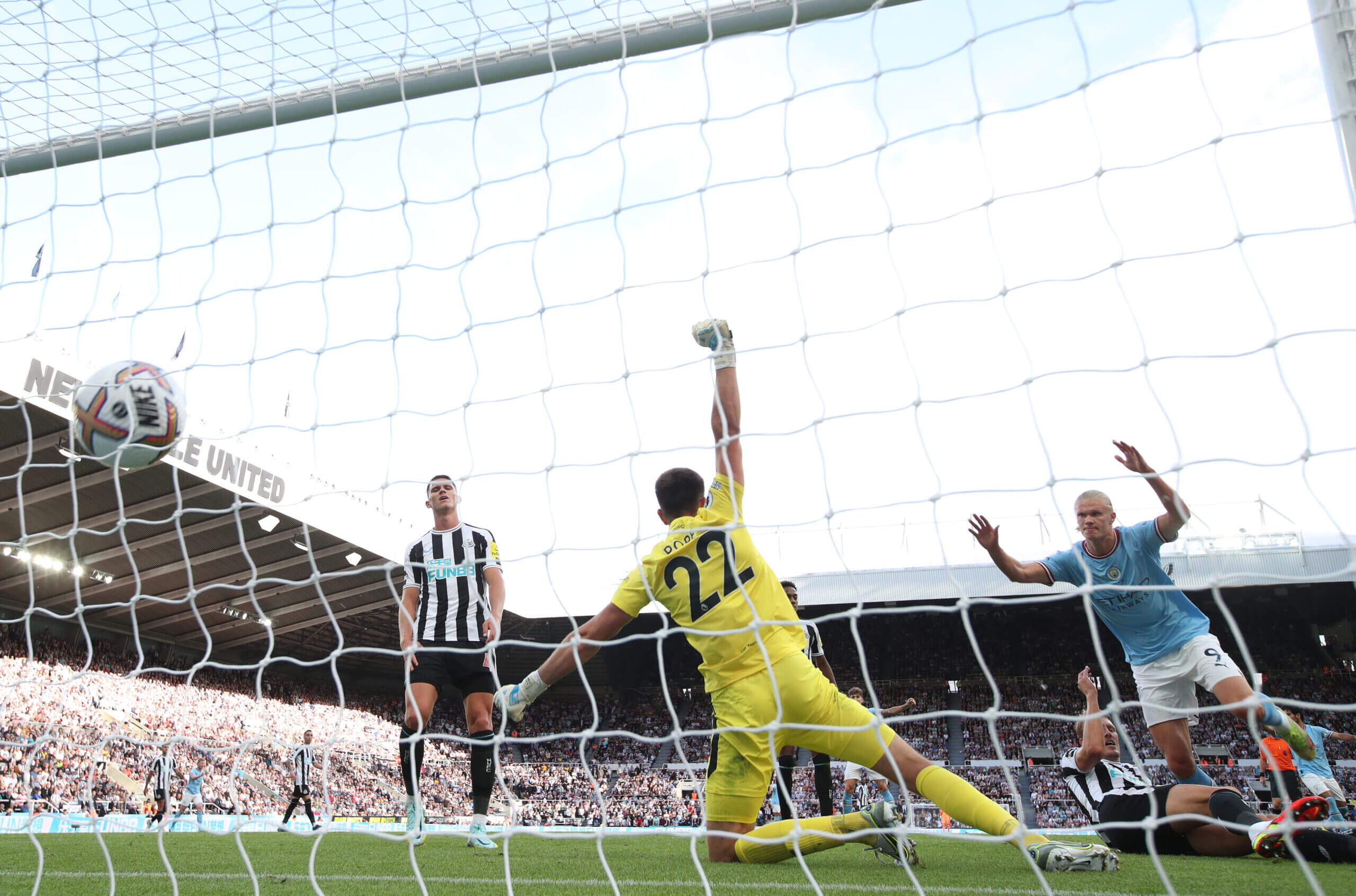 It is, at least, not all down to Haaland and his effect on this team.

Guardiola’s nod to Grealish, who has suffered a knock and so was not involved, shows that others can bring that little bit of ‘pausa’ to their play, even with the blonde battering-ram up top.

And there can’t be too much to put right, surely?

Joao Cancelo was — barring a harebrained pass towards a Newcastle player inside his own box, which Guardiola firmly rebuked him for — magnificent. The way he cushioned a high, dropping ball to a team-mate as the game raged around him was, simply, art.

Rodri struggled early on but was dominant by the end. At one point late on, a chasm opened up between City’s forwards and their last line. Rodri heaved himself into it to climb above two players, win a header, and then draw a foul. A more brutal artistry, that one.

Haaland had his chances and, for his sake, thank goodness he scored one to spare him another week of headlines. There were others that went begging, but he was far more involved than last week, and City looked better for it.

They are not a work in progress, City, that’s what separates them from most others, but they may well benefit from “living this experience”, as their manager put it.

By the end, the Newcastle fans were happy with a point from a game in which they led by two goals and threatened to score more.

What an experience it was.

A new start after 60: ‘I became an adventure cyclist at 65 – and rode from Mongolia to Scotland’