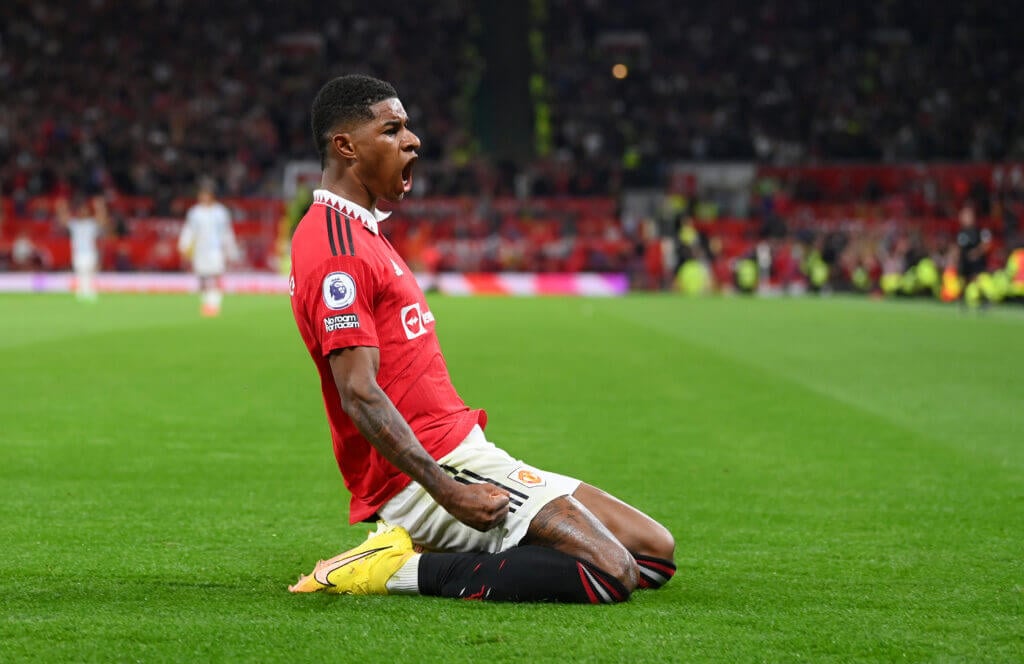 Manchester United secured a deserved 2-1 win against Liverpool in the Premier League at Old Trafford after Erik ten Hag took the brave decision of dropping Cristiano Ronaldo and club captain Harry Maguire from his starting line-up.

Jadon Sancho and Marcus Rashford were on the scoresheet for United, who had started the season with consecutive defeats to Brighton and Brentford. Liverpool, meanwhile, are without a win in their opening three games following draws against Fulham and Crystal Palace and have now conceded the first goal in their past seven Premier League matches.

Mohamed Salah made it 2-1 with 10 minutes to play but it was too little too late for Jurgen Klopp’s side.

Ten Hag gets his United line-up spot on

Anka: “We know Liverpool are a really good team and you need to press them,” said United’s manager Ten Hag prior before kick-off. “You have to do that out of a block and need energy, that is why we went with Rashford, Sancho, (Anthony) Elanga.”

United came flying out of the blocks in the opening 15 minutes, playing in a manner not too dissimilar from United’s Project Restart performances from 2019-20. Ten Hag’s front three were quick to run in behind when on the attacking transition, looking to exploit weaknesses in a Fabinho-less Liverpool midfield.

In defence, Raphael Varane and Lisandro Martinez kept things simple, defending close to the penalty area and being aggressive in their 1v1 duels. Martinez especially looked encouraged by the solidity offered by his centre-back partner and the left-back Tyrell Malacia.

That Ten Hag opted for Anthony Martial, rather than the 37-year-old Ronaldo at half-time reinforced the issue. There might still be a time and a place for Ronaldo to lead the line for United, but this was not it.

This was a brave, direct TEAM performance from Ten Hag’s side.

Jones: It was a big call for Klopp to leave out Fabinho from his starting XI. It quickly became apparent it was a bad decision but Liverpool’s midfield problems go deeper than that.

Jordan Henderson, James Milner and Harvey Eillott were lethargic and completely overrun. No aggression, no physicality: they lacked creativity with the ball and offered very little protection to those behind them.

It used to be the opposite, a Klopp midfield squeezing the life out of their opponents, offering little encouragement to the opposition and making sure territory was controlled and dominated.

Injuries are not helping but would it have made a difference? Naby Keita was the latest to add to Thiago, Curtis Jones and Alex Oxlade-Chamberlain but these issues have been bubbling.

Klopp can talk about not needing to add a midfielder or it being about the right one. On the evidence so far this season, they appear to be crying out for one and it needs to be addressed sooner rather than later.

De Gea goes back to basics

Tharme: Two games of Premier League football and Ten Hag has said, “Can you not knock it?” Superb.

Much of United’s downfall this season has been attributed to a repeated tendency to – badly – build from the back and in particular from their goalkeeper David de Gea.

United continued to set up with a shape that was designed to play out: centre-backs dropped deep either side of the goalkeeper, one of the pivot players closer to de Gea.

But the Spaniard did not use them. In the first half he almost exclusively kicked long and across the width of the pitch.

Marco Silva told The Athletic that Fulham’s strategy was similar in their 2-2 draw with Liverpool on the opening day: “Against Liverpool was clear. It was a clear strategy (to go direct), it was planned.”

Anka: A confident first half led to a positive second half for the 24-year-old. Rashford’s best performances have often seen him playing off Anthony Martial, as the Frenchman’s hold-up play and passing opens up further space for him to run into.

Rashford’s goal – which looked offside until VAR quelled the fears of United fans – was his first in the Premier League since January. He appears to relish his 1v1 battles with Trent Alexander-Arnold, and his wider performance once again demonstrated how dangerous he can be when he runs in behind his full-back. He has now scored five goals in 11 league games against Liverpool. Only two Premier League players have scored more against Liverpool since Klopp took charge — Leicester City’s Jamie Vardy (eight) and Tottenham Hotspur’s Harry Kane (six).

It was a performance that Rashford, and United’s other goalscorer Sancho, will look to build upon. For United, and for their chances of making England’s World Cup squad later this year.

Another slow start by Liverpool

Jones: Well… it happened again. Seven times in a row they have conceded the first goal in a Premier League game. It is already too familiar and Liverpool aren’t capable of climbing every mountain.

In Liverpool’s opening two games of this season, their starts were Jekyll & Hyde. They did not get going against Fulham and deservedly fell behind; their start against Crystal Palace was much better before they were sucker-punched on the break.

This was Fulham all over again. Given United’s start to the season and protests from supporters before the game, they were going to start quickly. Liverpool appeared to not get the memo. They could not match the intensity or aggressiveness of the home side.

Sancho’s goal came on 15 minutes but Liverpool could easily have been behind before then. Defensively they were all over the shop, the midfield failed to impose themselves, conceding possession too easily and the front three rarely touched it.

Liverpool’s first shot did not come until the 19th minute and they were playing catch-up all game.

US rejects Ukrainian call for blanket ban on visas for Russians

The Last Of Us TV Show Releases First Footage, But It's Only A Couple Seconds