Manchester United’s focus on improving their full-back situation is clear.

The recruitment department earmarked a new right-back before the summer started and ultimately Erik ten Hag pushed for a new left-back when Tyrell Malacia became available.

Getting those positions right will go a long way to determining the success of Ten Hag’s tenure. In his system, full-backs are expected to contribute to the attack as much as the defence, as indicated in a pre-season training drill of eight versus seven at the Rajamangala Stadium in Bangkok where the full-backs were part of the attacking team. 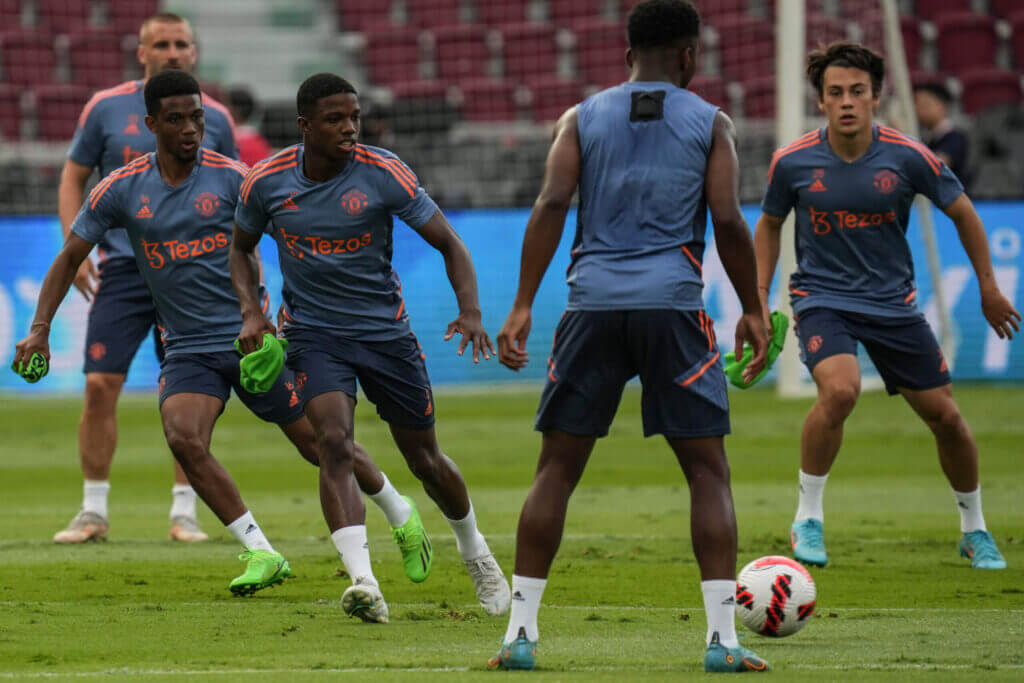 Malacia (middle) during a training session at the Rajamangala Stadium in Bangkok (Photo: Anusak Laowilas/NurPhoto via Getty Images)

Those drills may have contributed to convincing Ten Hag that Diogo Dalot is better suited to the planned strategy than Aaron Wan-Bissaka. Ten Hag alternated the pair after each mini-game ended, but Dalot went on to start all five first-team friendlies against Liverpool, Melbourne Victory, Crystal Palace, Aston Villa and Atletico Madrid, while Wan-Bissaka only featured as a substitute in three of those games.

Dalot prepared for Ten Hag’s arrival by committing early to fitness work, spending time at The Campus, a multi-sports complex in Portugal’s Quinta do Lago, in late June.

On tour he set up two goals, with his assist to Anthony Martial against Palace a particularly eye-catching expression of skill and vision — bringing the ball down on his chest then clipping a left-footed pass over the opposition backline.

Dalot also showed he is an engaging personality, signing shirts for fans at the WACA sports stadium in Perth and offering good answers in media interviews.

“We need to be proactive, not just the full-back — everyone,” he said when asked about what Ten Hag was demanding of him. “Read the game, be always on our toes. Mentally we have to be connected all the time and hopefully we can improve a little bit more.

“It is demanding but at this club you want to play attacking football, you want to have fun, you want to enjoy playing in attacking positions. Obviously, it will take demands physically but I think we are going to be ready for the season.”

There are improvements to be made in his game — including the accuracy of his crossing and defensive positioning — but Dalot is a player who studies his game and that of others. Being an intelligent thinker chimes with Ten Hag’s tactical plans and his starting place seems assured for the foreseeable future. 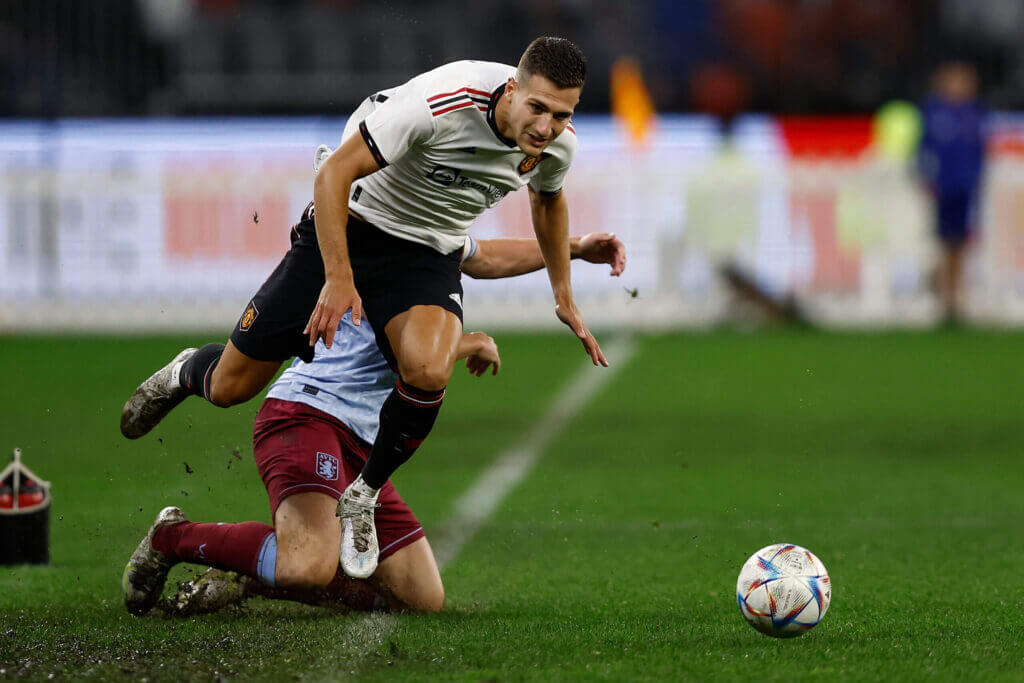 Pre-season events added weight to what sources have said: Wan-Bissaka is not Ten Hag’s preferred profile of a player. Although an excellent one-on-one defender, Wan-Bissaka is hesitant going forwards and Crystal Palace’s inquiry earlier in the summer was made in the expectation an offer would be entertained by United.

There have been promising performances by Wan-Bissaka, notably when facing Manchester City and Raheem Sterling, but Ten Hag wants more from his full-backs. In truth, the 24-year-old from Croydon has struggled to adjust to life in Manchester and the scrutiny of playing at Old Trafford. Any chance of United recouping the £50million ($60.4m) paid to Palace for his transfer in 2019 is fanciful, and privately people accept that trumpeting how Wan-Bissaka was chosen from a selection of 804 right-backs was unwise.

Wan-Bissaka was ruled out of the most recent friendlies against Atletico and Rayo Vallecano through illness but he trained on Sunday morning with the rest of the team. Ten Hag is not closing the door yet.

“The start of the season, it’s all open and we have to cover many, many games,” Ten Hag said. “You need players, quality players, to cover all the games, but I can tell in advance nobody can play all of the games.”

Ethan Laird played the full 90 minutes against Vallecano and did well, having also benefitted from going on tour. He is a bright presence around sessions.

His performances, coupled with Wan-Bissaka’s slip in standing, have left some to wonder if he might rival Dalot this season. But a loan is the clear preference for the 21-year-old, who had a positive spell at Swansea last season. The view is Laird needs regular games at his age, and talks with Watford are ongoing.

On the opposite flank, the situation is less clear. Luke Shaw has seemed like Ten Hag’s first pick up to now, given his number of starts in friendlies. He missed the Atletico game through illness but has recovered. 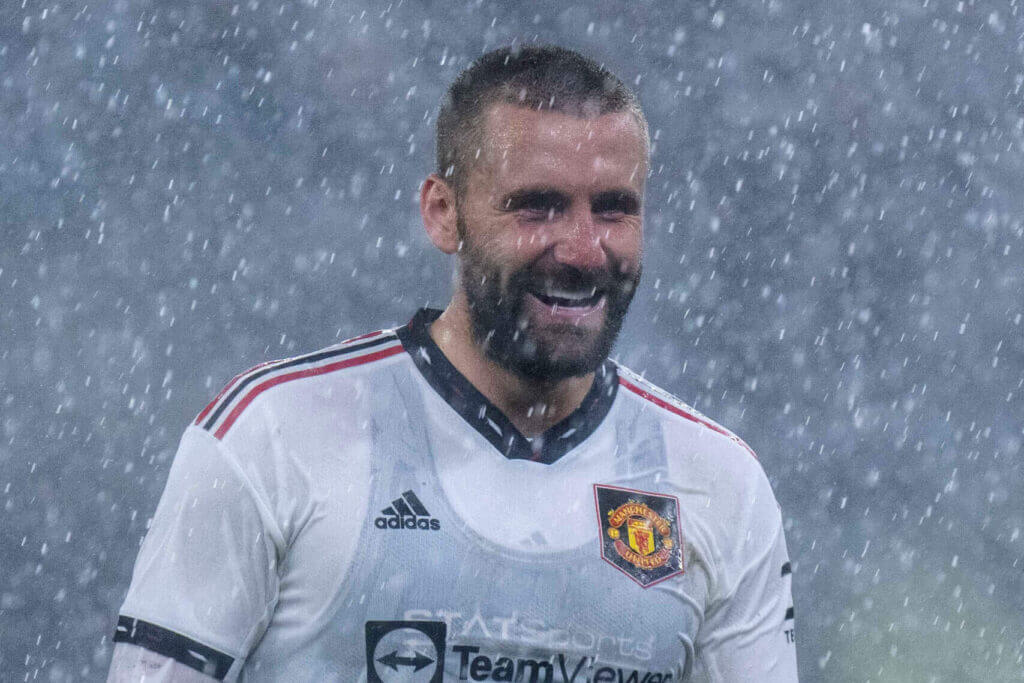 On the other hand, Ten Hag has liked Malacia since he played for Feyenoord against Ajax in the Eredivisie. His close control was demonstrated during training sessions on tour.

His fiery side has also been evident. He argued with the coaches after his team lost one drill, but after airing his grievances he dropped down for the press-up punishment, doing the exercise with precise technique. Shaw and Malacia are expected to rival each other for the starting spot.

Brandon Williams is the other senior left-back in United’s squad. He missed the tour through a small injury that required treatment at Carrington. He is yet to gain full fitness and talks are being held over a possible departure on loan or permanently. Teams in the Premier League and abroad have shown interest but nothing is advanced.

Sources say Ten Hag views Williams as a possibility on the right, given that is his stronger foot. Williams prefers to be on the left so he can cut inside. Ten Hag ideally wants his full-backs to play on the side of their dominant foot and mainly used Nicolas Tagliafico and Noussair Mazraoui at Ajax, although Sergino Dest, who is right-footed, did occasionally play on the left.

Some close to the club felt Alvaro Fernandez might be ready to challenge for a first-team place this season after being named player of the year in the under-23s. But the arrival of Malacia meant a loan was the chosen path for the 19-year-old, and he has gone to Preston North End for the campaign. His progress will be watched closely.

Alex Telles has gone on loan to Sevilla, who will cover his full wages. There is no option or obligation to buy. Telles joined from Porto late in the 2020 transfer window, with United saying he had been scouted since playing for Galatasaray four years earlier — an example of the recruitment process working smoothly.

The 29-year-old departing two years later, having made a modest impression aside from a glorious goal against Villarreal, presents an alternative view as argued by others; that United’s scouting network has reports on thousands of players across the globe, but that does not mean the process always succeeds.

This summer, United have let Ten Hag take the lead with Malacia, 22, a case in point. Everyone at the club will hope he has a greater impact than his predecessor.

Mock the Week was never part of the culture wars. We only fought for laughs