Auston Matthews won his first Rocket Richard Trophy in 2021. He was also runner-up to Connor McDavid for league MVP. Mitch Marner, meanwhile, was one of six players selected to the NHL’s end-of-season All-Star team. He was named the best right winger in hockey during the 2020-21 regular season.

That stuff came to mean less because of what came next for the Maple Leafs: A seven-game loss to an inferior Canadiens team that ultimately shut down Matthews and Marner when it mattered most. 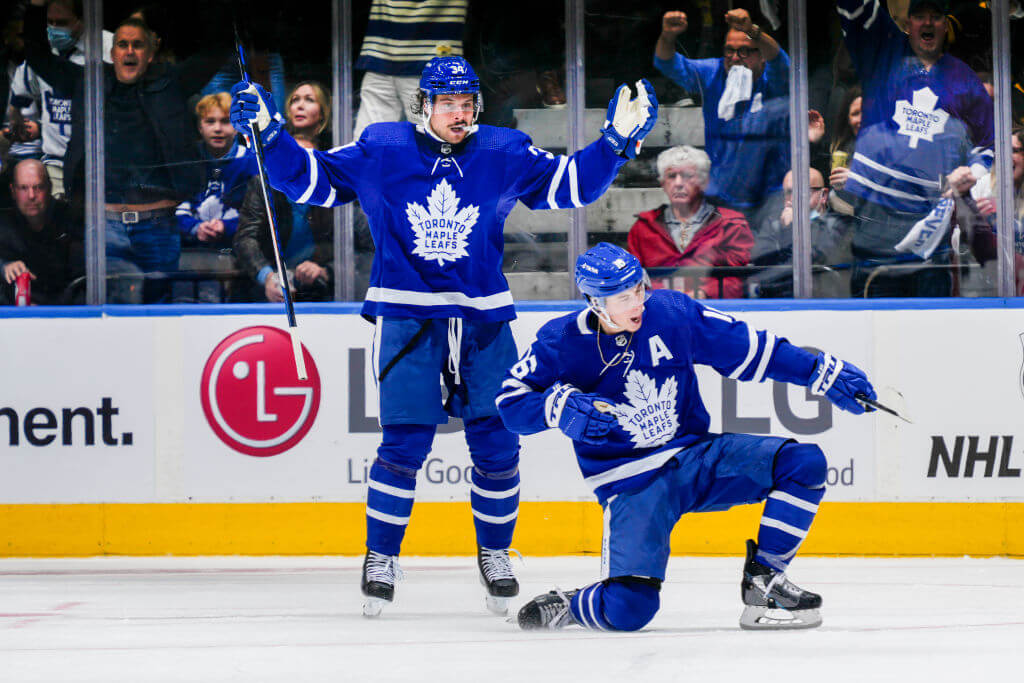 Here we are again — albeit with the Leafs facing off against the two-time defending Stanley Cup champs.

Matthews and Marner are coming off brilliant regular seasons, two of the best individual seasons in the Maple Leafs 100-year history.

Matthews set a new franchise record with 60 goals. It took him only 73 games to do it. For that, he earned his second straight Rocket Richard — joining Alex Ovechkin, Pavel Bure, Sidney Crosby, Jarome Iginla, and Steven Stamkos as the only repeat winners. He also was recently revealed as a finalist for the Hart Trophy and Ted Lindsay Award (the latter being the “most outstanding player” as voted on by the players) for the second year in a row.

Marner was tied for 95th in league scoring on the first day of 2022. He ended the season in 10th.

Adjusted for era, their regular seasons rank among the most productive by a Leaf in modern times.

And yet, it’s Game 7 that will really define those seasons.

It’s not that their regular-season brilliance won’t matter without a positive result for the Leafs on Saturday night. It’s that their seasons will matter that much more with a positive result (aka a win), especially if its Matthews and Marner, the Leafs’ two best players, leading them there.

Legacies are shaped in the playoffs. There’s a reason guys like Curtis Joseph and Darcy Tucker still get thunderous ovations any time they show up at SBA.

Matthews has emerged as the best player in this series. He destroyed the Lightning in Games 5 and 6, elevating to a level he’s never before reached in the postseason — or maybe in the NHL period.

During those two games, Matthews scored twice — the emphatic game-winning goal in Game 5 and the goal that got the Leafs on the board in Game 6 — while attempting 23 shots, nearly double the next closest Leaf (Marner, with 12).

He also had 16 hits, and ranks among the league leaders with 26 hits total in the postseason.

“He was really physical, throwing his body around,” Justin Holl said of Matthews’ nine-hit outing in Game 6.

Matthews also won 64 percent of his 47 draws in those last two games, including 9 of 12 in the defensive zone.

He’s already set a personal career high for points in a playoff series, with eight through the first six games. He’s scored on 16 percent of his shots, just about matching his mark from the regular season (17 percent).

Early in the series, the Matthews line was stalling out in head-to-head minutes against Tampa’s hearty shutdown line, led by Anthony Cirelli. Then, suddenly, the matchup stopped mattering. Matthews went into Beast Mode and obliterated anyone the Lightning threw in his way.

During Games 5 and 6, the Leafs collected 66 percent of the expected goals when he was out there. And make no mistake, he was the driver of that action, winning pucks back every chance he got, including in his own zone.

The Leafs nearly doubled the Lightning in the shot attempt department during those five-on-five minutes.

“I think we need to just try to attack,” Matthews said of his line’s approach before Game 6, “just attacking, being physical.

“They’re gonna obviously try to neutralize us, try to be above us, defensively and stuff. We’ve gotta be really good defensively as well so we can transition those pucks in the O-zone.”

It was about “leading the way in different categories,” Matthews added. “It’s not always gonna be the goals and the plays and the assists. Sometimes, it’s just blocking shots, physicality, just getting momentum and winning your shift for the next line.”

In three home games this series, Matthews has collected three goals and six points. The Leafs have exploited last change on those nights, often pitting the Matthews trio against non-Cirelli lines where they’ve frequently pounced off the rush.

The Leafs have outscored the Bolts 5-1 in Matthews’ five-on-five minutes in Toronto.

More of that, more of that Matthews, and the Leafs will be in good shape in Game 7.

His sidekick has been a little quieter of late after a raucous start to the series. Marner has registered only one assist — a big assist, mind you (the set-up on Matthews winner in Game 5) — in the last three games.

Even more than Matthews, a triumphant performance from Marner would go a long way to erasing a recent reputation of coming up short in the playoffs.

All it takes is one series to change the narrative that way. Just look at how the story changed for William Nylander last season, when he shined in that first-round series against Montreal.

Marner has put together a good, not great, series to this point. He’s still got time to find another level. The Leafs need the joyful Marner to re-emerge, the guy who plays free and unencumbered, the guy who shoots the puck with no hesitation.

Marner was not only one of the top goal scorers in the league during the second half of the regular season. He was also one of the most prolific shooters, period, averaging 3.5 shots per game from mid-January onward.

And while he registered 15 shots in the first three games of the series, Marner pumped out only six shots in Games 4 to 6.

After one shift in Game 6, when he hesitated with opportunities to let it rip, Marner returned to the bench and quickly reviewed the action on an iPad. Jason Spezza stopped by with a word of encouragement.

Marner has done some of his best work on the power play, which has been hit or miss this series, when he’s simply flung pucks at the net without thinking twice. That, or teeing up Matthews.

Leafs coach Sheldon Keefe did what he could to supercharge Matthews and Marner five-on-five in Game 6, by dropping Nylander onto their line from time to time — in place of Michael Bunting, who looks to be playing at less than 100 percent.

One of those shifts, a faceoff in the Tampa zone in the second period, produced the Matthews goal that cut the Lightning lead in half.

The Leafs owned the minutes that saw their three biggest stars playing together, winning all seven of the shot attempts.

More of that is a must in Game 7, especially given Nylander’s fiery play of late.

Nylander logged almost four minutes with Matthews in Game 6, plus 12.5 with Tavares and three with David Kampf. He’s become a special weapon the Leafs are happy to roll out across the lineup.

The biggest undercurrent of the series to this point from a Leafs perspective, aside from another Game 7, is how much the stars have been driving the bus to get here.

Speaking about his confidence in the group heading into the all-or-nothing game, Keefe noted “that it’s our top players here that are executing at critical times and helping us find our way back.”

Added Mark Giordano: “I think they’ve been leaders for us on the ice, just the way they’re driving the play, the way they’re making things happen. I think a lot of the time, a lot of results are based on what those guys do offensively, but what I see is (Auston) and (John) taking huge faceoffs, winning huge draws, playing really well in their zone. Willy, whenever we need a spark, he’s a guy that’s been giving us that lately. I think all our top guys — I think the misconception is how great they are always offensively. (Marner) is another example. But they do a lot of really good things both ways on the ice that when you see that as a player and those are your top guys it goes a long way.”

More than anything, Game 7 could come down to how the best of that bunch, Matthews and Marner, perform.

They’ve struggled with similar opportunities in previous years. Over the final three games against the Habs in 2021, Matthews and Marner failed to score and combined for only three assists (two by Matthews, one from Marner). A year earlier, in the Game 5 finale against the Blue Jackets, neither Matthews nor Marner found the scoreboard at all.

Deliver star performances this time around and the Leafs might well end their postseason drought and inch closer toward the real goal here, a Stanley Cup.

Great regular seasons are one thing. Legacies are truly born in the playoffs.

1973: how a year became a subtle way to rally for abortion rights