The Maple Leafs have to be pondering that question in the immediate aftermath of another first-round exit – now six in a row.

“I think you want to think that way,” Morgan Rielly said after the Leafs’ 2-1 loss Saturday, “like we’re moving in the right direction, like we’re getting somewhere.

“But when the outcome is the same in the playoffs, it makes it difficult to reflect on it much differently than you have in the past.”

Coupled with a record-setting regular season, the Leafs’ performance against the Lightning has to mean something. It’s why staying the course now is the most prudent path for the Leafs and a front office that shouldn’t be going anywhere — not without tweaks though, some bigger than others.

If there was ever a time to pivot and change course, it was after last season, after that embarrassing, humbling unraveling over seven games against Montreal.

At five-on-five, the Leafs outscored the Bolts 13-12. Expected goals were 50-50. There wasn’t a lot separating these teams. “This one’s tough because I really feel like we’re a lot closer than it appears,” Leafs coach Sheldon Keefe said. 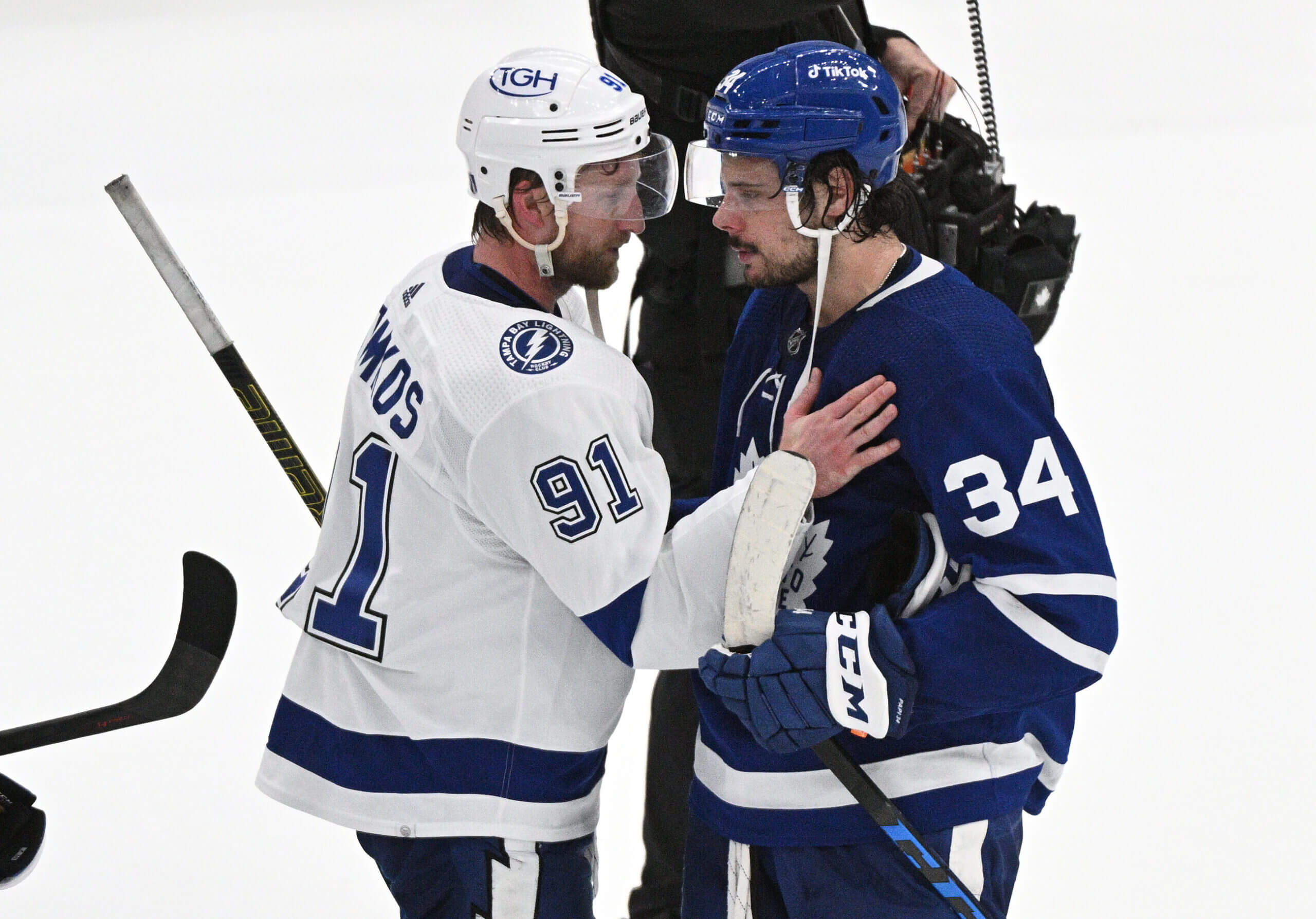 Drastic change would have the Leafs move core players – someone from among Auston Matthews, Mitch Marner, William Nylander, John Tavares or Morgan Rielly. None of which seems likely or prudent given how well that core performed all season.

Matthews and Marner are no-gos for obvious reasons. Both followed up elite regular seasons with their best playoff performances yet – four goals and nine points for Matthews, six assists and eight points for Marner.

The Leafs could have used one more goal from their line in Game 7, but it’s hard to quibble with their play overall in the series. Marner just turned 25, and Matthews will get there in September. Both guys, clearly, are still on the rise.

The same goes for Nylander. For the second postseason in a row, Nylander raised his level (and engagement) and delivered the kind of performance the Leafs needed from him – seven points in seven games.

If there was ever a time not to deal him, it’s now.

There are meaningful questions to pick through with Tavares. Lines led by him were mostly outplayed in this series. The 31-year-old finished with an expected goals mark of just over 40 percent. That’s a problem. His lines also had issues defensively in the regular season. Does he still belong at centre? Can lines featuring him and Nylander survive defensively? The Leafs are going to have to unpack those issues.

Tavares came on strong in the back half of the series though and was robbed of a game-tying goal in Game 7. He’ll be 32 in the fall. He’s also the team captain with an $11 million cap hit for the next three seasons and a no-movement clause.

Rielly is the longest-tenured Leafs player and signed an eight-year extension last fall that will kick in next season. He’s not going anywhere.

Neither is T.J. Brodie, who performed well in tough terrain against Tampa.

Michael Bunting, David Kampf and Alex Kerfoot are all signed for next season and should be sticking around. The Leafs could have used a little more from Bunting against the Lightning. That late-season injury really slowed him down until late in the series. He scored only once after a 23-goal regular season, and managed only six shots all series. Kerfoot’s decision-making proved costly at times, particularly in Game 6, but it’s hard to fault his effort and the usefulness he offers the Leafs.

Pierre Engvall is a pending RFA and here to stay, as are (presumably) youngish defencemen, Rasmus Sandin and Timothy Liljegren. Ondrej Kase is another RFA in need of a new contract.

Change is coming somewhere though.

Jack Campbell is a pending UFA coming off an uneven regular season, his first as a starting goalie in an 82-game season. He ended up with an .897 save percentage over seven games against Tampa and was ultimately outplayed in Games 6 and 7 by Andrei Vasilevskiy.

If the Leafs bring him back, which seems likelier than not, they’ll need to pair him with a partner who can reliably take over the net, if needed. That was supposed to be Petr Mrazek this season. Can the Leafs move his contract somehow — two more years, $3.8 million cap hit — and find a suitable replacement?

Another area in question: defence.

Jake Muzzin held up well against the Lightning. He’s also 33, coming off an injury-plagued season and signed for two more seasons at a pricey number ($5.625 million on the cap). He’s one guy the Leafs are going to have to think long and hard about this offseason.

Can they count on him to be available and play at the level they need when it matters a year from now?

Needing Brodie to play with Muzzin, meanwhile, robbed Rielly of a capable partner. Ilya Lyubushkin was overexposed playing on the right side of the top pair. Lyubushkin played less than 12 minutes in Game 7.

The Leafs stopped using him after three shifts in the third.

The Lightning had a monster top four to rely on. Victor Hedman played 25.5 minutes in Game 7. Erik Cernak, his partner, finished with 26.5. Ryan McDonagh logged 22 minutes. Mikhail Sergachev chipped in with 21.

Keefe said he came away most impressed by Tampa’s ability to defend. Having those four leading the way makes a lot of difference.

The Leafs felt a bit short on that front at times, like they were maxing out Muzzin, Brodie and even Mark Giordano. Justin Holl had difficult moments.

Will they bring back Giordano next season? And if so, what does that mean for Muzzin and Sandin?

The other clear fix needs to come on the margins up front. As expected, the Lightning got more – four goals from Corey Perry, Pierre-Edouard Bellemare and Pat Maroon – from their fourth line than the Leafs did.

Not having Kase running at full steam hurt. And though Jason Spezza gave the Leafs as much of a lift as he could – on and off the ice – it’s evident that he’s right at the end of a tremendous career. (Using Kyle Clifford and Wayne Simmonds early in the series was a clear misfire.)

At some point soon, the Leafs are going to need more of a push from their young talent – Matthew Knies and Nick Robertson.

The Lightning got a push from Ross Colton (three goals, five points) in this series and Nick Paul, who scored both goals for Tampa Bay in Game 7. Ilya Mikheyev is likely to depart for a big payday in free agency, which will leave a hole to fill in the top nine.

Another crucial shortcoming – maybe the biggest misfire of all – was special teams, which looked like an advantage heading into the series.

The Leafs had the No. 1-ranked power play during the regular season, but missed on a bunch of crucial opportunities throughout the series, including in Game 7. They clicked only 14 percent of the time, and just 11 percent with a five-on-four advantage.

The Lightning were opportunistic with their chances, meanwhile, most crucially with a five-on-three advantage in Game 6. They scored on 21 percent of their opportunities. 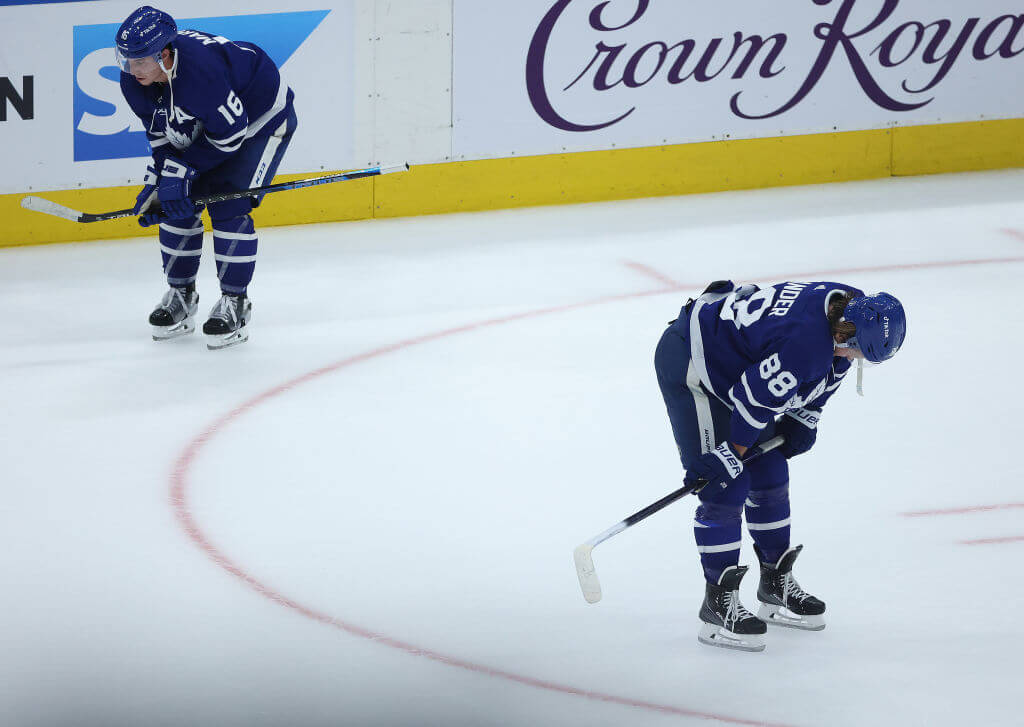 “It’s a game of inches and unfortunately we’re on the bad side of things tonight,” Matthews added. “It’s really frustrating. It’s really disappointing.”

Said Keefe: “This one’s tough because I really feel like we’re a lot closer than it appears.”

He’s not wrong. The Leafs don’t feel far off, not just from winning a series but more seriously contending for a Stanley Cup. That’s admittedly hard to argue after another first-round exit, but it feels true nonetheless.

The Leafs stormed through the regular season and might have even challenged Florida for the top spot in the conference with more consistent goaltending. One or two more power-play goals and maybe they eke past the Lightning.

Falling short of the Stanley Cup makes the season a failure. There’s enough here though, enough going on, to think a similar team, with some upgrades, will be in position to contend — again. Change for the sake of change is rarely good.

And yet, it’s also important to take stock of the big picture. Matthews and Nylander have only two years left on their contracts. Marner and Tavares are up the year after that.

At some point, process won’t be enough. This team will either deliver on its potential or run out of chances.

Let’s not mock bald men. But do they really feel threatened? | Stephanie Merritt