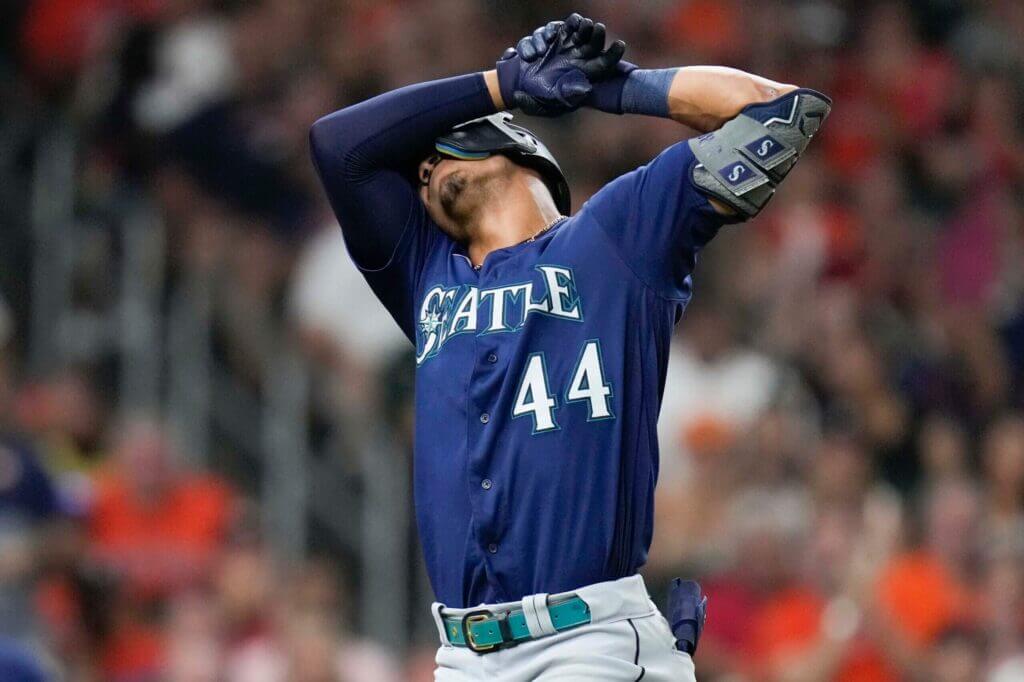 HOUSTON — The Mariners sure didn’t have long to celebrate snapping a five-game losing skid to the Astros with a 5-4 comeback victory Saturday night, a win that might have been their best and most satisfying of the season.

Sunday morning, the fallout from that victory hit the Mariners like a bad hangover, as the team placed two players on the injured list as part of a greater roster shuffle before the series finale at Minute Maid Park.

The most notable injury was to All-Star center fielder Julio Rodríguez, who was placed on the 10-day injured list with a right wrist contusion after getting hit by a pitch on the back of his hand in Saturday’s game.

Rodríguez, who missed the first four games after the All-Star break with a sore left wrist, couldn’t grip a bat Saturday after being hit, which forced the Mariners to pinch hit Abraham Toro for him in the ninth inning.

Rodríguez had an X-ray, and it was negative for a fracture. He hasn’t ruled out an MRI for peace of mind.

Toro had a two-run single to put the Mariners on top of a game they led 3-0 and then trailed 4-3 before their last turn.

He could return on Aug. 10 for the last game of a three-game series in Seattle against the Yankees.

“I want to play. I want to be able to support the team the best I can,” Rodríguez said Sunday morning. “I’ve got to get my hand better and get back on the field.”

Rodríguez suffered a hairline fracture to his left wrist in April 2019 while playing in Low A, then fractured that wrist again in 2020 while participating in a Mariners summer camp workout. He understands the value of being patient.

“Everything’s got to be right. We’re going to be careful and make sure that I’m 100 percent and not have to deal with it the rest of the season,” he said.

The Mariners also placed infielder/outfielder Dylan Moore on the 10-day IL with back spasms. Ty France also was not in the lineup Sunday, as he was having an MRI on his left wrist — the result of an awkward swing he took earlier in the series.

“Every team has to deal with adversity,” Mariners manager Scott Servais said.

This is plenty for the Mariners, who are in a stretch of playing 13 games in 13 days coming out of the All-Star break. And now they’re without Rodríguez, whose electric play has helped them get into the wild-card picture.

The Mariners recalled outfielder Jarred Kelenic from Triple-A Tacoma, and though he wasn’t in the clubhouse Sunday morning, he was to arrive in time for the game and was going to be on the lineup card. He figures to jump into center field for Rodríguez.

Kelenic made his big-league debut for the Mariners last May, then was sent back to Tacoma and promoted again. This season, he made the Opening Day roster but was optioned back to Tacoma in May after hitting .140 in 96 plate appearances with three home runs and 10 RBIs. He was also carrying a 37.5 percent strikeout rate.

The Mariners also added outfielder Jack Larsen from Double-A Arkansas on Sunday. Larsen was hitting .260 with six home runs and 37 RBIs for the Travelers. He gives the team more outfield depth for the time being.

To make room for Larsen on the 40-man roster, the Mariners designated left-handed pitcher Anthony Misiewicz for assignment. Misiewicz began the season with the Mariners but was optioned to Tacoma after posting a 4.61 ERA in 17 games.

All of this was enough to make Servais’ head spin. For the first half of the season, he has presided over a fairly stable roster. Not so much Sunday, though.

“These things only happen once every five years or so,” Servais said.

Commonwealth Games: Yee denies he will buy a dog after mixed triathlon gold

The Lionesses have done it. This victory will change women’s football for ever