The saga of Maxwel Cornet’s future is over. After a summer of links and speculation, he finally has a new home.

When the final whistle blew on Burnley’s six-year stay in the Premier League in May, the 25-year-old’s future seemed inevitable. An eye-catching debut season in the top flight, scoring nine goals in 26 appearances, would always attract interest from Premier League clubs.

After The Athletic revealed the £17.5million ($21m) relegation release clause in Cornet’s contract, any deal seemed simple. Pay the price and Cornet was yours (although Burnley are reporting it as an undisclosed fee).

Yet, while the sales of Nick Pope, Nathan Collins and Dwight McNeil were agreed, Cornet remained, training with the Burnley squad but not being considered for selection by manager Vincent Kompany as their campaign began.

Those close to the player insisted any speculation would not affect him and that he had returned to the club following an extended off-season break determined to give 100 per cent while he waited for his future to be resolved.

Burnley briefly hoped that when Cornet returned, the presence of Kompany combined with the new-era atmosphere and long-term vision would convince him to stay.

That was a pipe dream. Burnley knew it and, as well as needing funds, they were not going to stand in the way of players who should be playing at a higher level. It was when, not if, he left, and there were plenty of suitors.

Along with interest from clubs abroad, multiple Premier League teams tracked him, including Everton, Nottingham Forest, Newcastle and Fulham. Chelsea were also monitoring his situation as a back-up to their preferred options.

David Moyes’ side registered their interest in Cornet at the start of the summer and had been searching for a versatile left-sided player.

The transfer progressed quickly. Cornet was not at Burnley’s training ground on Thursday, instead heading to London as personal terms were being discussed. He had his medical that evening.

After the final formalities were completed, he was announced as West Ham’s newest addition on Friday night.

Cornet’s versatility was a key attraction for Burnley when they purchased the Ivorian last summer for an initial fee of around €12million. Having played left-back during the previous season at Olympique Lyonnais, Burnley believed he could operate further forward on both flanks, which he had done earlier in his career, and centrally. 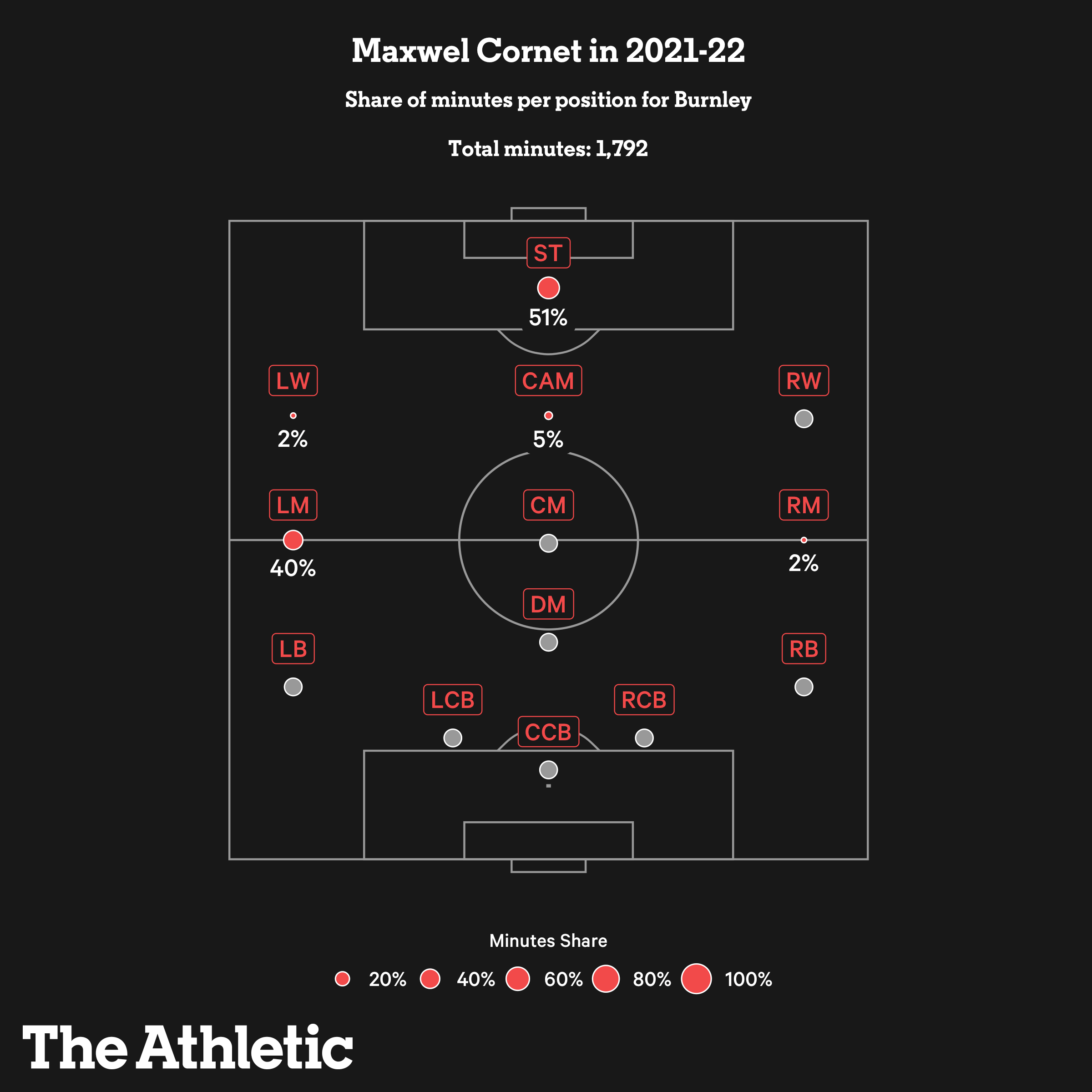 Initially, Cornet was deployed on the left of a 4-4-2 at Burnley, but after beginning his time at Turf Moor on a hot streak (scoring five goals in his first six starts), and with Sean Dyche unconvinced by Cornet’s defensive work as he adapted to the pace of the Premier League, he was moved into the forward line.

With his natural goalscoring instinct becoming obvious, the coaching staff wanted him as close to the goal as possible, so he spent half of his minutes on the pitch playing up front.

He hosted his own goal of the season competition between September and November, when all but one of his goals were world class. Everything he touched turned to gold.

There was also his impact on morale. When they signed him, Burnley knew they were getting a likeable dressing room character. Still, club sources were surprised by how quickly he settled on and off the pitch.

He brought an energy to the training ground that rubbed off on his teammates. Following his debut against Arsenal, he sent a message to the players’ group chat expressing how much he’d enjoyed his first few weeks.

Supporters adored him, as shown by the outpouring of well-wishes when news of his departure broke. He had the x-factor. He could produce something from nothing; the type of player not seen at Turf Moor for some time.

Using smarterscout, which uses data to give players a rating from 0-99 on a variety of metrics, we can look at what West Ham fans can expect from their fourth recruit of the summer.

First, we have his pizza chart as a striker. 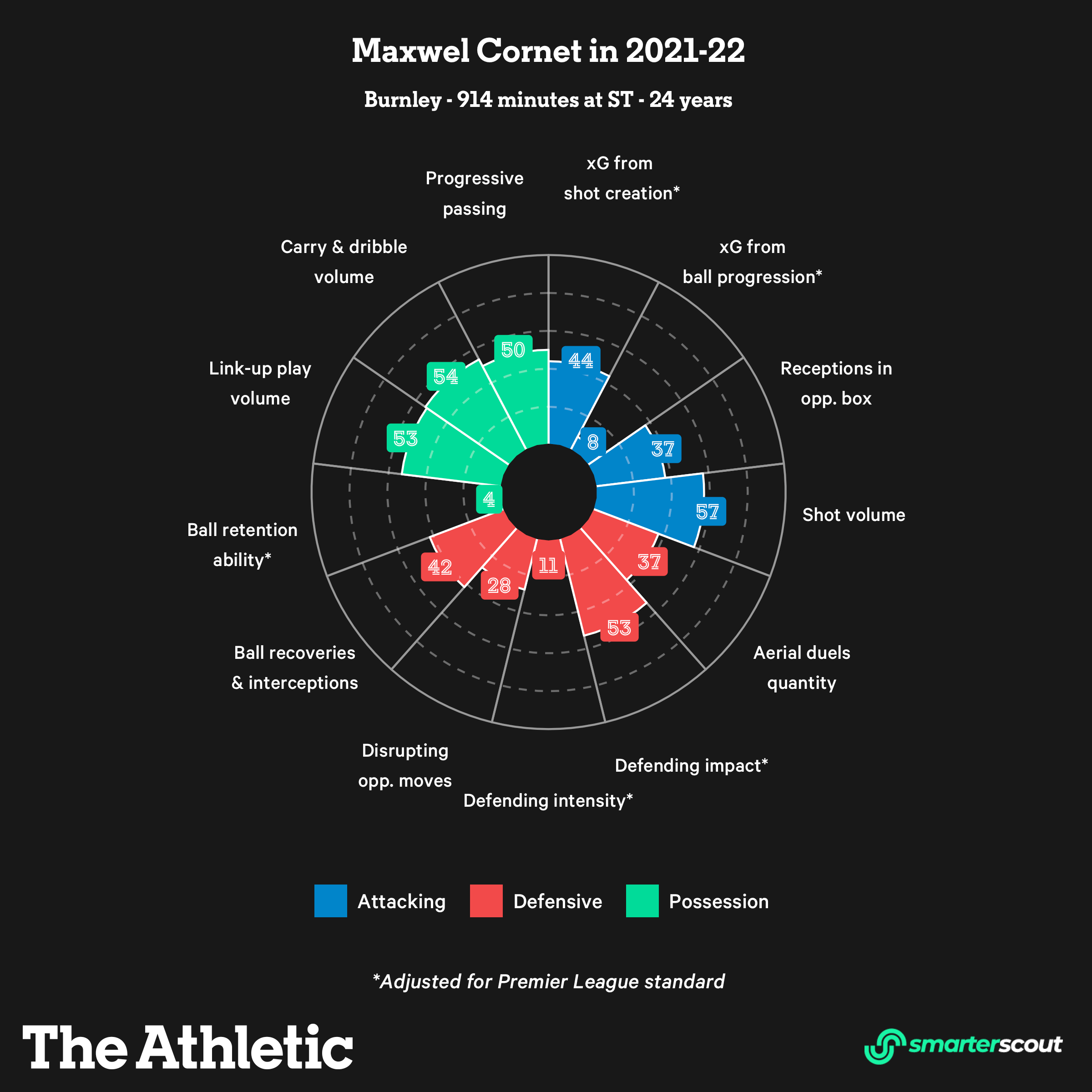 On first look, nothing stands out, and that is understandable given Cornet was playing in a team that spent most of their time out of possession and struggling to sustain attacks.

When he did get on the ball, Cornet linked play with short passes (link-up play volume: 53 out of 99), could pass progressively, which is any attempt of over 10 yards (50 out of 99), and would drive forward with the ball to try to put defenders on the back foot (carry and dribble volume: 54 out of 99).

A concern is his very low ball retention ability (4 out of 99). Burnley’s strikers often found themselves isolated up front, which resulted in Cornet attempting higher-risk options, but even so, it is an area he must improve on. 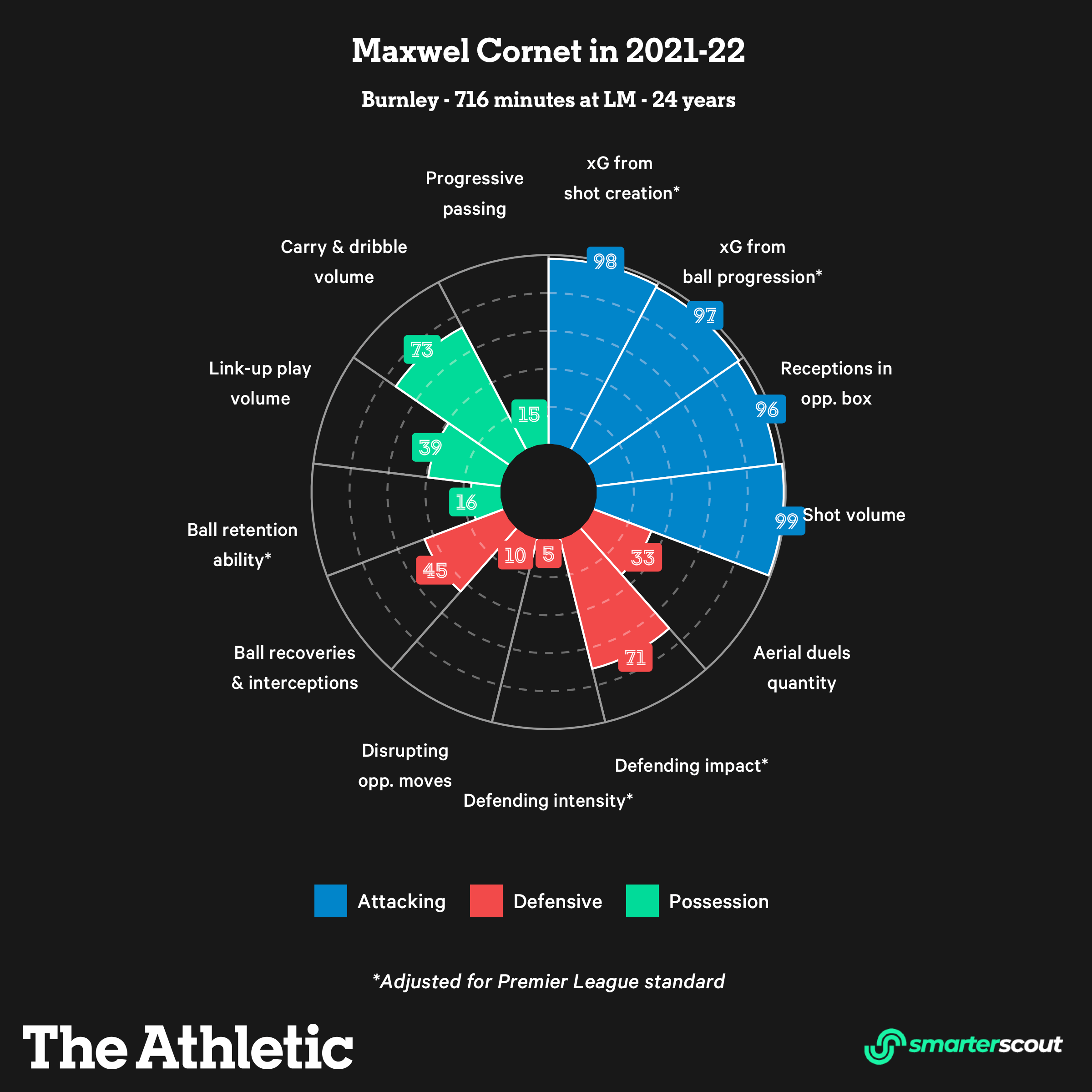 Before you conclude that Cornet is the greatest attacking left midfielder ever, it is important to provide context.

When assessing left midfielders, smarterscout has a broad cohort that also incorporates left wing-backs in a back five as well as a conventional left midfielder in a 4-4-2. Left-wingers, however, are in a different sample, for example those who operate in a 4-2-3-1, which is a common formation that West Ham use.

What we can surmise is that Cornet is not strong compared to other strikers, but is too attacking to be a left midfielder. His metrics would most likely score somewhere in between as a left-winger, but that wide position is a role he clearly suits and should flourish in.

A key feature of Cornet’s game is his ability to stretch the pitch vertically, frequently taking up more advanced positions than others playing in the same position would. When out wide, he opts to dribble more (carry and dribble volume: 73 out of 99) than pass, using his speed and occasional trickery.

He was extremely creative, scoring high in expected goals (xG) from shot creation (98 out of 99) and xG from ball progression (97 out of 99), which relate to how the player contributes to attacks and goalscoring chances. He regularly advanced into the box and found the ball (receptions in opposition box: 96 out of 99), taking every opportunity to shoot (shot volume: 99 out of 99).

Out of possession, Cornet’s defensive impact (71 out of 99) is impressive, showing how well he prevents the opponent from progressing up the pitch. While he is not an active defender (defending intensity 5 out of 99), when he is the primary defender, he is about average for his volume of interceptions and ball recoveries (45 out of 99).

At Turf Moor, we saw the good and bad. He was unable to shake off frustrating injury niggles. He also failed to recapture the form he showed in the first half of the season when he returned from the Africa Cup Of Nations.

While he provided key goals, like the late winner against relegation rivals Everton, Cornet stumbled in other big moments. West Ham supporters witnessed him miss a penalty that would have given Burnley a 2-0 lead in a game they ended up drawing, costing them two crucial points. A week earlier, he missed an open goal in a 2-0 defeat to Norwich that proved to be Dyche’s final game in charge.

Cornet stood out in a poor team that was ultimately relegated last season. He is joining a team who will be in the top half of the table with better quality team-mates in a system that should suit him.

With one year of Premier League experience under his belt, he is acclimatised to the pace and demands of the league. West Ham will hope he has everything he needs to hit the ground running.