CLEVELAND — Ochai Agbaji was in Cleveland about two weeks ago for a workout before the NBA Draft. From the time he walked through the doors of Cleveland Clinic Courts, he said it gave him a sense of home.

Fast forward to Thursday night, when Agbaji was one of the green-room attendees at the draft in Brooklyn. He received the call that the Cavaliers had picked him at No. 14 and heard his name announced on stage. About 12 hours later, he and his family were on a plane headed for Cleveland. And when he stepped off the plane and saw a crowd of fans waiting to greet them, that’s when it set in: He was an NBA player and a member of the Cavs.

“Up until that moment I got a call, I was just blessed to be in that position just to begin with,” Agbaji said. “It was a really special moment, not only for me, but for my family and for my friends to be there. And obviously, being here, it feels at home, and I’m excited to get to work.”

On Friday, the Cavs held an introductory news conference featuring Agbaji and the No. 39 pick, Khalifa Diop, whom the team will stash overseas to continue developing his game.

“We did a lot of due diligence,” president of basketball operations Koby Altman said Friday. “We looked at a lot of different players, and character, work ethic and guys that really wanted to be in Cleveland were a big part of our process. And so we know we’re bringing tremendous character and work ethic and winners to the table, including a national champion.”

Though the talent portion plays an important role — especially for Cleveland to see success — the Cavs value who their players are as people and their character. It was a major factor in the team’s chemistry last season. Players bought into specific roles, felt genuine support for one another, wanted to be successful as a team and played with a level of joy for most of the season. When Agbaji heard how close the Cavs players were, it ignited an excitement in him to meet his new teammates. He experienced that togetherness at Kansas and saw firsthand the importance it played in the success of a team on the court.

Kansas head coach Bill Self recognized Agbaji’s high level of character while he played for the Jayhawks.

“He’s very unselfish, he’s very thoughtful, he’s a ‘we guy,’ he’s conscientious, he cares about others,” Self said on a Zoom call following the draft. “I think from a character standpoint, and I’d throw (Christian Braun) in the same group, it’s a short roll call to find people that are better people — what you hope your son could grow up and be — more so than these two. It would be hard to find. They’ll add value just from an intangible standpoint and from a culture standpoint; I guarantee it the first day they step into the first practice.”

As the Cavs went through the pre-draft process, they took the success of the team from the 2021-22 season and had to figure out a way they could improve. Cleveland was one game short of making the playoffs, losing both games in the Play-In Tournament. The silver lining to missing the playoffs meant it kept the 14th pick, which was included in the trade for Caris LeVert but was lottery-protected.

Though coach J.B. Bickerstaff holds a level of confidence in the rostered group, especially with the leap Darius Garland took last season, the Cavs had to find players in the draft who could help their current players be even better. They had to address specific needs, and the one Agbaji fills is shooting.

“I thought he could be a weapon. He’s got a skill that no matter where you are in the NBA, you need it,” Bickerstaff said. “He has the ability to put the ball in the basket, and it’s not just the ability to stand in a spot and make a shot. When we watched him play, it was his ability to move and catch and shoot off of screens, off of handoffs, where he knew how to make himself difficult to guard. And you know at this level, shotmakers are a premium, not only as a young player, as a role player, as a star, his responsibility is to help his teammates.”

Agbaji tested the draft waters during last year’s draft process before he decided to return to Kansas for his senior season. Self said he encouraged Agbaji to test the waters, and when Agbaji didn’t receive the feedback he hoped, he took it in stride to improve his game.

Through the early pre-draft process, Agbaji said he learned that he could take his work ethic to another level and apply that mindset during his senior season. He focused more intently on his mind and body in preparation, and Self sat down with Agbaji and his family and talked through a plan for his senior year.

Altman described Agbaji as a late bloomer. A 22-year-old rookie, he is on the older side of other draftees coming into the league. Yet Agbaji doesn’t see that as a concern. Instead, it motivates him because he reflects on his progression throughout high school and college. His growth over his four years at Kansas provided him a chance to learn.

Self doesn’t believe Agbaji is close to his ceiling, even being a four-year prospect and entering the league at 22.

“His intangibles have improved so much from a competitiveness (standpoint). Even though he always was (competitive), he’s learned that there’s a different gear you have to get to compete at the highest level,” Self said. “When you work as hard as he does in that fifth gear, every single possession, every single drill, every single shot, you’re going to get better. He’s a good shooter, great shooter; he’s going to become exceptional.” 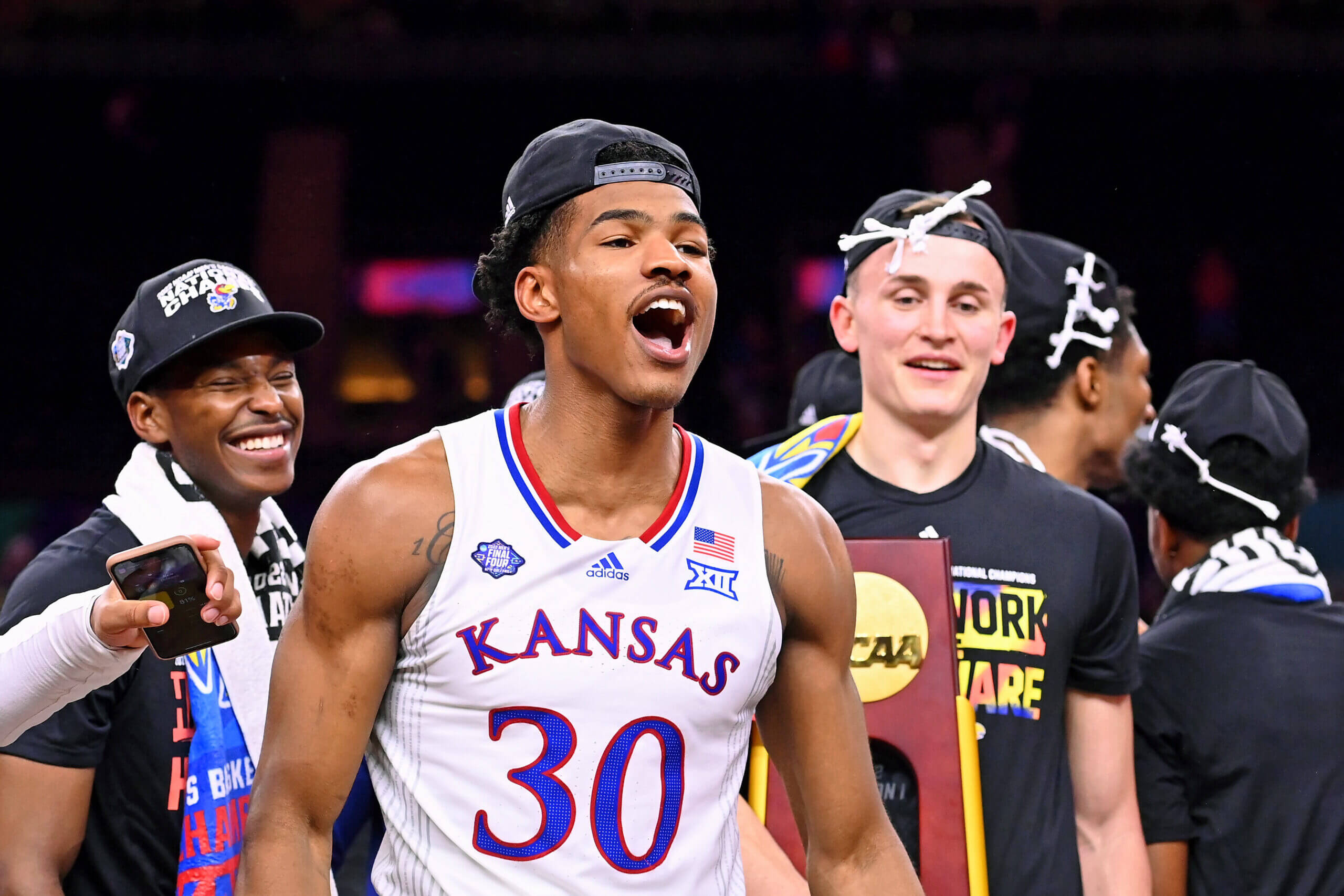 As Agbaji sat in a chair Friday with Altman on one side and Diop and Bickerstaff on the other, the feelings of excitement and a readiness to play filled the practice facility. Agbaji said he had heard from Garland and Isaac Okoro since he was drafted and said he wants to be a “sponge” next season, focusing on learning from both the veterans and younger guys.

The Cavs will have to work through a crowded guard situation with the addition of Agbaji — especially with Collin Sexton’s looming restricted free agency. Okoro and Caris LeVert are also in that conversation. But Altman views Agbaji as having a different skill set than Sexton or even Okoro.

Bickerstaff didn’t box Agbaji into being either a two or a three. Instead, he’s taking the approach of putting together lineups that benefit the Cavs. That work begins with NBA Summer League and the practices leading up to it. The Cavs’ next task is to see how Agbaji fits with their group and into their system.

Bickerstaff mentioned how all the Cavs’ players were back in Cleveland in September last year before the start of training camp. The coaching staff holds a similar expectation for the group this year. It’s a time when guys can play pickup, voluntarily workout and start to build necessary chemistry as a group. It’s also an opportunity for Agbaji to become acclimated and find his fit with  his new team.

The Cavs continue to try and take meaningful steps forward, building off the leap they made last season. It’s part of what led to the choice of a more complete player in Agbaji instead of a young, developing guy. Agbaji’s pedigree lived up to what the Cavs needed.

“Winning a national championship and then getting drafted in the first round is a dream come true for anybody,” Agbaji said. “I’m so blessed to be here, to be in this position.”