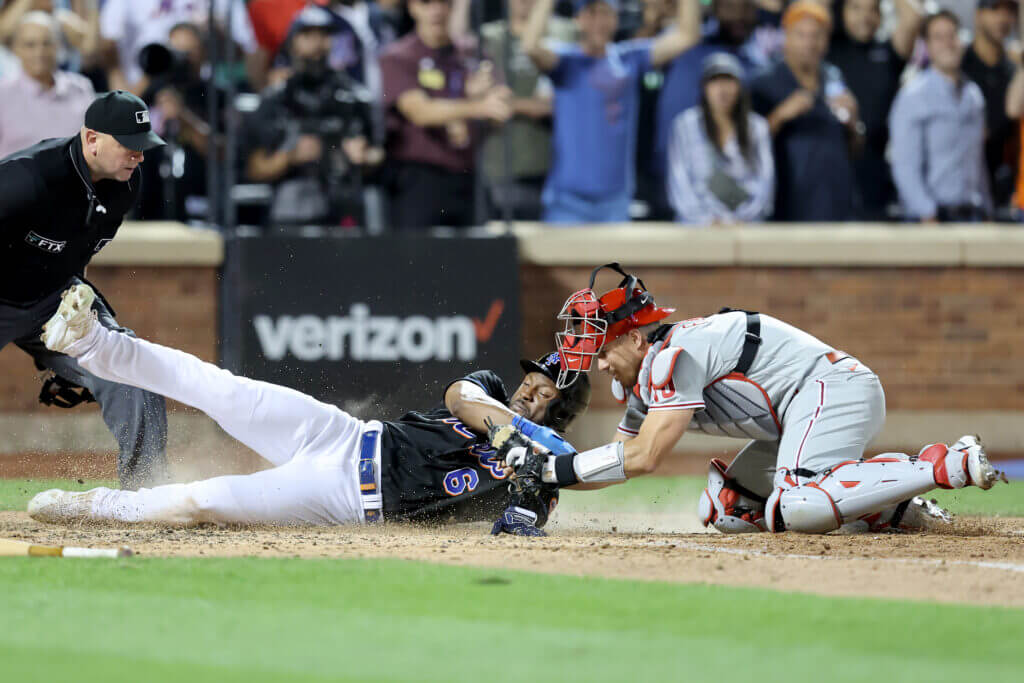 NEW YORK — Get used to this.

It’s been six years since the Mets and their fan base had the privilege of experiencing the play-to-play intensity of postseason baseball — six years without that specific kind of heartburn that tantalizes and tortures in equal measure. On Friday night, the Mets and Phillies staged a high-level baseball game decided by the finer points of execution.

This is what October is going to feel like.

For the first time in a long time, the Mets lost this kind of game. Philadelphia took the series opener 2-1 in 10 innings at Citi Field. The Phillies threw out the potential game-winning run at home plate in the bottom of the ninth; the Mets just missed on their chance to do the same a half-inning later. That, in a nutshell, was the difference.

“We came close to scoring that second run,” manager Buck Showalter said. “They did, and we didn’t.”

The Mets last saw the Phillies stumbling well below .500 back in late May. Monday revealed the thoroughness of their overhaul since then, with a lineup helmed by younger players and a defense capable of standout and even, yes, game-saving plays like Matt Vierling’s ninth-inning throw to nab Starling Marte at home.

It was Marte’s throw home that Tomás Nido couldn’t corral, permitting Bryson Stott to score the go-ahead run in the 10th. Nido said he misjudged the incoming hop and how much time he’d have to make the tag.

The Phillies defense saves the game. 👀

Those are the kinds of fundamentals that October baseball games may very well come down to, the kind the Mets have excelled at for so much of this season. No, we are not used to a game between these two specific franchises being played at this quality.

Philadelphia’s ascent since Memorial Day is a reminder of the depth of the National League. Fears of an unworthy third wild-card entrant won’t come to pass in the senior circuit this year, with the sixth seed in San Diego on pace for 90 wins. Despite the expansion of the postseason, the Mets are going to face a very good opponent come October.

And the next two weeks will be their last prolonged test before then. Only nine of New York’s final 37 games after that are against winning teams. But Friday marked the start of another 13-game August gantlet. They’ll spend back-to-back weekends battling the revitalized Phillies, with series in Atlanta and the Bronx following them, respectively.

It was precisely a sequence like this that proved New York’s undoing 365 days ago, when it fell from a first-place tie to third place and 6 1/2 games back by going 2-11 in four series against the Dodgers and Giants.

Of course, these Mets have spent 4 1/2 months proclaiming their distinctions from those Mets; Francisco Lindor got “M-V-P!” chants Friday night, to show that time has passed. These Mets have not leaked oil into this stretch, these Mets have not lost their best players to the injured list, these Mets have shown time and again their resilience and versatility — along with enough talent to run out to the second-best record in franchise history through this many games (73-40). They entered their tough stretch 34 games over .500, or 14 1/2 games better than they were a year ago.

But that doesn’t mean this baker’s dozen of contests can’t be instructive, in the ways these teams poke and prod at the Mets’ potential weaknesses.

What happens if the Mets’ starter gets worked early? On Friday, the Phillies made Max Scherzer work more than he had since returning from the injured list. Scherzer allowed six base runners through two innings, which required 43 pitches. Stott became the first player to ever reach base four times in the same game against Scherzer.

“We played really good ball as a whole,” Scherzer said.

What happens if the Mets’ depth is compromised? New York lost both Eduardo Escobar and Jeff McNeil within the first two innings, which forced lefties Luis Guillorme and Tyler Naquin into the lineup against southpaw Ranger Suárez and pushed Mark Canha to third base for the first time in six seasons. He handled his only chance seamlessly.

Still, that early use of the bench handcuffed the Mets later. They couldn’t hit for Guillorme against lefty José Alvarado leading off the eighth. In the 10th, they had no one to run for Daniel Vogelbach as the bonus runner.

“There are some things we couldn’t do that we normally could have done because of the injuries early in the game,” Showalter said.

What happens when Edwin Díaz isn’t throwing all the high-leverage innings? Adam Ottavino and Mychal Givens each threw strong innings Friday, with Givens having to take the unearned run and hard-luck loss thanks to the bonus runner in extras.

And there’s something that didn’t feel like October on Friday. Come then, Díaz will be going more than one inning and eight pitches. And the 10th inning won’t start with a runner at second.

‘I hope the parents aren’t judged for having a glass of wine’: María Moldes’s best phone picture