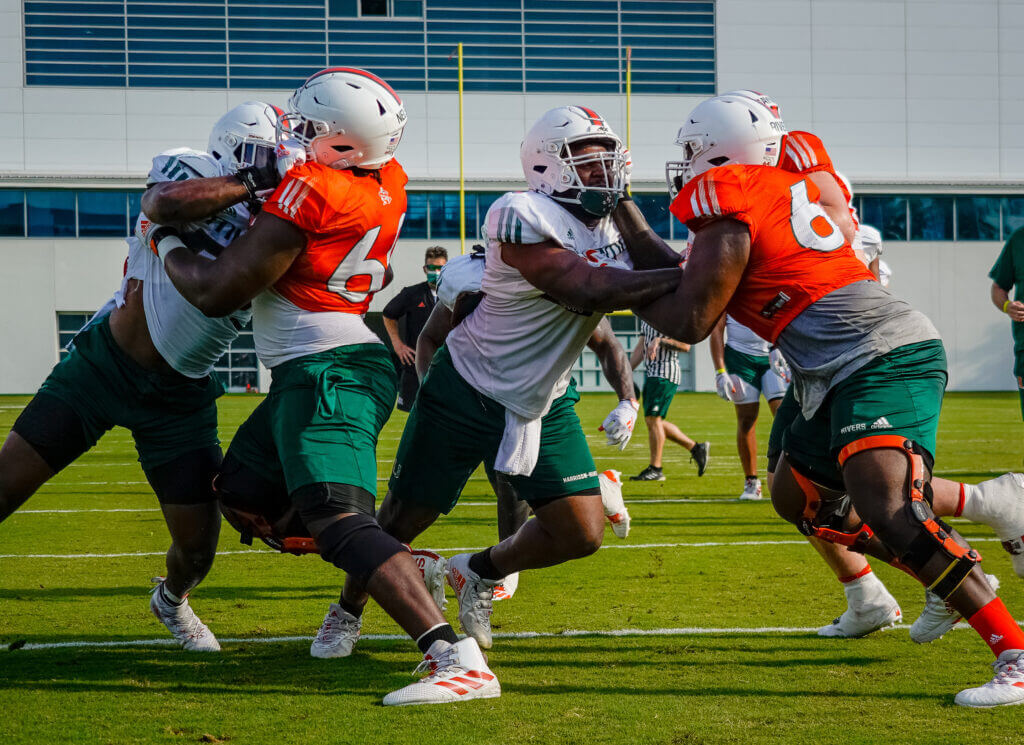 “He’s right over there when we’re doing individual drills, running the drills,” said left tackle Zion Nelson, a preseason All-ACC selection and 32-game starter for the Hurricanes who is projected by a few publications to be a first-round pick next April. “If he’s off to the side, he’ll give us tips on footwork, our hands, all that kind of stuff.”

Cristobal — who was enticed to leave Oregon in December with a 10-year, $80 million deal, promises of the biggest budget in the ACC to hire assistant coaches, and upgrades to Miami’s on-campus facilities that will cost in the hundreds of millions — didn’t return home only to make the Hurricanes a little nastier up front. He came back to restore Miami’s championship glory. National titles and College Football Playoff appearances are what’s expected by those footing the bills in Coral Gables. But if Miami is going to get there, the Canes have to start looking like Georgia, Alabama, LSU, Clemson and Ohio State in the trenches.

Cristobal wants difference-makers on both sides of the line. He is working on it.

On defense, Miami has a commitment from one of the nation’s top edge rushers in 6-5, 245-pound four-star Jayden Wayne and is in the running for a handful of other elite defensive linemen.

Quarterbacks, receivers and high-scoring offenses may get all the glory and attention in today’s game, but elite defensive fronts also win championships. Georgia’s national championship squad last year and Clemson’s in 2018 each had three first-round picks on the defensive line.

Alabama, where Cristobal served as an assistant for four years from 2013 to ’16, has remained dominant up front even after Nick Saban decided to start flinging the ball around like everybody else. The Crimson Tide had six linemen (four on offense, including first-round tackles Evan Neal and Alex Leatherwood) drafted off their title team two years ago and 10 linemen (four first-rounders, two each on offense and defense) off their championship team five years ago.

LSU’s record-setting scoring machine in 2019 has had 11 linemen drafted: six on the offensive line and five on the defensive line, with one first-rounder (edge rusher K’Lavon Chaisson).

Miami has produced NFL-caliber talent on defense. The program has had defensive linemen drafted since the start of the Playoff era in 2015, including first-round pass rushers Jaelan Phillips and Gregory Rousseau. But only three offensive linemen have been drafted in that span.

In his time at Oregon (2017-21), Cristobal can take credit for helping four offensive linemen get drafted, including 2021 top-10 pick Penei Sewell, plus two edge rushers led by 2022 No. 5 pick Kayvon Thibodeaux. The Ducks won two Pac-12 titles and a Rose Bowl with those guys.

“From a strength standpoint, I actually think these guys are stronger,” Canes offensive line coach Alex Mirabal said Tuesday when asked if the offensive line he’s working with at Miami is comparable in size and strength to the ones he coached under Cristobal at Oregon.

“(Strength and conditioning) Coach (Aaron) Feld does a great job of preparing these guys mentally. He attacks them mentally as much as he does physically. It doesn’t surprise me because obviously I was blessed to be around Aaron for four years at Oregon. So I’ve seen it. I’ve seen his philosophy, his mindset work. So it’s been neat to see these guys benefit from it the way I saw the kids over at the other place benefit from it. They’re confident because they feel themselves getting stronger. They’ve seen their bodies transform. What that does is it creates a tremendous amount of buy-in. I know I’ve got to wake up today and I know he’s gonna kick my butt, but I know that that’s going to benefit me and help make me a better player and help make us a better team and a better program.”

Coaches, players and proud parents have not been shy to share the positive results of Feld’s offseason conditioning program. Some have even posted before and after photos provided to them by Miami on their social media accounts, displaying how much weight they’ve lost or gained with body fat measurements included.

Boy you fine like your daddy 😜
Seriously, greatness abounds you son! Keep one foot on their necks and the other on the gas and keep going! #bookofEli #hideYaQB pic.twitter.com/vI5wLs422e

A video clip shared by Mirabal of sixth-year offensive lineman Justice Oluwaseun becoming the second offensive lineman on the team to squat over 700 pounds (Oregon transfer Logan Sagapolu is the other) has close to 65,000 views on Twitter.

“What I loved most about the video was watching the reaction of his teammates sharing in his success,” Mirabal said. “That to me was what was cooler than doing the actual weight. I talk about it all the time in the O-line room. I say, ‘Are you a good teammate?’ That’s important.”

Many linemen at Tuesday’s media event were happy to tell us about their physical transformations and weight room feats. Third-year edge rusher Chantz Williams said he cut his body fat percentage by three points (to 12 percent) and gained 10 pounds of muscle to beef up to 260 pounds.

“My mom said I look like a grown man now,” said Williams, who has lined up in workouts on the strong side with West Virginia transfer Akheem Mesidor, Elijah Roberts, Jabari Ismael and Nyjalik Kelly and opposite Mitchell Agude, Jahfari Harvey and Cyrus Moss. “This is the heaviest I’ve ever been, but physically, I feel like I come out of my hips better. I’m more agile now, change direction way better.”

Fourth-year defensive tackle Jared Harrison-Hunte, who started eight games last season and missed time in the spring with an infection, said he beefed up his upper body strength and gained 25 pounds to get to 295.

“I used to only bench 315 to 325,” Harrison-Hunte said. “Now, I’m 365, 375 and my max is 385. At the line, I feel the difference just punching people and moving somebody without having to worry about them recovering. It’s a big difference, a big change.”

Second-year defensive tackle Leonard Taylor, one of two five-star recruits on Miami’s roster who led Miami with 9 1/2 tackles for loss in 2021, said he cut his body fat percentage from 17 percent to 12 percent while maintaining his weight of 290 pounds.

“I feel much stronger and healthy up top,” Taylor said. “I can do more pull-ups. I started off at one pull-up. Now, I’m doing eight. I used to only bench press three plates. Now, I’ve added a 25-pound and a five-pound plate on each side.”

Fourth-year offensive lineman John Campbell, who is coming off season-ending ACL surgery that cost him all of the 2021 season, said he did “14 or 15” pull-ups this summer to lead the offensive line room. He said he’s lost 20 pounds since coming off bed rest and weighs somewhere between 315 to 320 pounds. He’s benching close to 400 pounds.

Jalen Rivers, who was Miami’s starting left guard last season before a season-ending ACL injury, said he’s down five percent body fat and 11 pounds to 328 pounds overall. He recently squatted 615 pounds after being in the 400s during the spring.

“The thing I like about the program is we’re focusing more on football elements, certain exercises that translate out in the field,” Rivers said. “Last time we just lifted heavy and focused on getting better in the weight room and not really having it transition football-wise.

“There are so many new things we do like punching. In the weight room, we have a drill where we’re punching a bag. As offensive linemen and linemen in general, we’re punching, we’re hitting, hitting 300-something-pound, 200-something-pound people every day. There’s this one thing on the racks where we have to grip (the weight), punch up and we have to bring it back down. It works on your shoulder. We had a lot of shoulder injuries as well. So, we’re doing more shoulder stuff.”

Yoga is also available and encouraged for linemen.

Transforming the Hurricanes, though, goes beyond flexibility and muscle mass. Cristobal works on their brains, too. He is viewed as a tougher disciplinarian than former coach Manny Diaz, who received some criticism for not holding players accountable enough.

This spring, Cristobal restarted a practice because he didn’t like the energy. DJ Scaife, a 40-game starter on the offensive line for the Hurricanes, said players are now required to have their shirts tucked in during workouts and practice. Empty sports drink bottles used at practice and workouts can’t be left lying on the ground, either. Cristobal requires everyone to be early for practice and meetings. He also banned phones from meeting rooms.

“At times last year I would see people picking up their phones during a meeting,” quarterback Tyler Van Dyke said Tuesday. “When coach talks, you have to listen. I think it’s smart and good that we don’t have that anymore. Everyone’s locked in.”

• Mirabal said Oluwaseun, Rivers and Scaife, an All-ACC second team selection at right guard last season, will all work at left tackle during camp while Nelson is out recovering from surgery on his left knee. Nelson told The Athletic doctors have told him he’d be out for six to eight weeks after having the surgery in early July.

“The way I’d put it is it’s not too big of a procedure,” Nelson said. “What I had done was a scope. They just cleaned up some cartilage. I had kind of floating pieces of cartilage. It was getting pretty painful. So I kind of wanted to get that cleaned up before the season started.”

• Mesidor is another player who will get a late start on fall practices. He told The Athletic he’s about “80 percent” recovered from a torn labrum he’s dealt with since high school.

“During the bowl game I tweaked my rotator cuff,” Mesidor said. “In February they cleaned it up and put some suture to fix my labrum. They told me six months. I’m at month six right now. I’ve been lifting. It’s just small, awkward positions that hurt. But I’ll be ready by the season.”