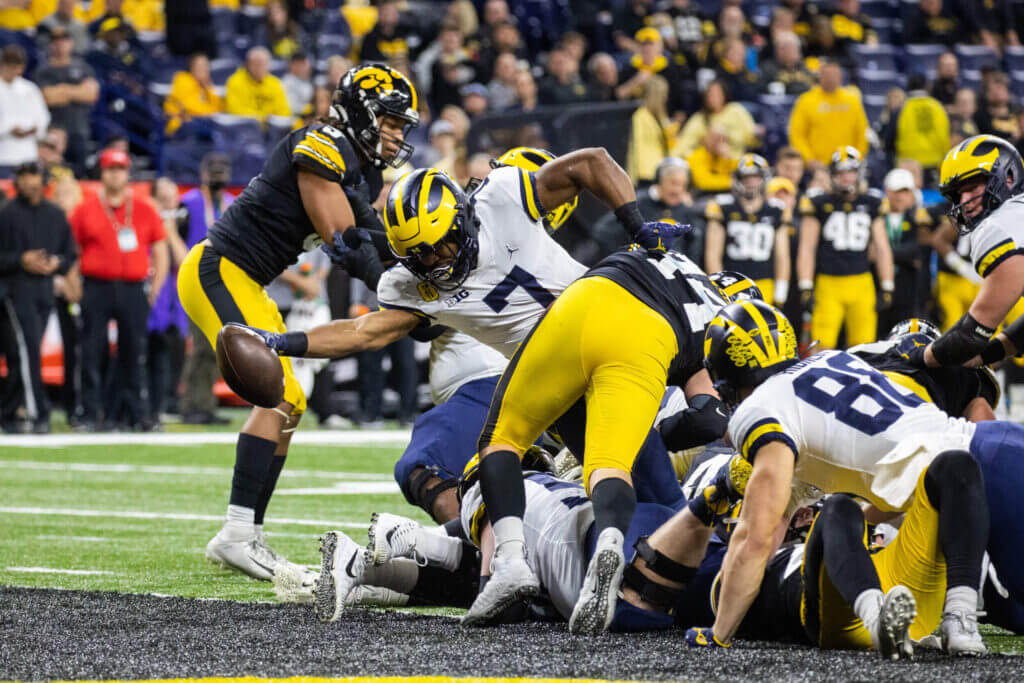 ANN ARBOR, Mich. — Not to brag or anything, but last year’s list of breakout players panned out pretty well.

After playing a handful of snaps during his first two seasons at Michigan, David Ojabo became a sack machine and a second-round draft pick. Blake Corum nearly hit the 1,000-yard mark while averaging 6.7 yards per rush. Once buried on the depth chart, defensive tackle Mazi Smith and cornerback DJ Turner emerged as reliable starters and leaders of Michigan’s defense.

So who’s primed for a similar emergence in 2022? Here are five possibilities now that preseason camp is underway.

Michigan’s 59-18 win at Maryland was overshadowed by what happened the following week against Ohio State, but that game offered a glimpse of how Michigan’s offense might operate with Edwards in a starring role. With Corum recovering from an ankle injury, Michigan’s plan was to isolate Edwards against Maryland’s linebackers and target him as a receiver out of the backfield. The result: 10 receptions for 170 yards, the most ever for a Michigan running back.

Edwards’ versatility as a runner, receiver and occasional passer — he also threw a 75-yard touchdown against Iowa in the Big Ten championship game — makes him one of Michigan’s most dynamic players. He had a limited role as a freshman while playing behind Corum and Hassan Haskins, but that’s going to change now that Haskins is in the NFL.

This isn’t exactly the “thunder and lightning” scenario Michigan had last year, when the Wolverines used the contrasting talents of Corum and Haskins to great effect. A big question for 2022 is how the Wolverines will adapt their offense to feature Edwards and Corum, backs with more similarities than differences. Will there be an equal distribution of carries? A starter and a backup? How often will Edwards and Corum be on the field together?

Those questions will be sorted out during camp, but it’s clear Michigan has big plans for Edwards, a top-50 recruit and one of the most talented players on the roster.

“He’s one of those that comes along every so often, every generation,” coach Jim Harbaugh said. “He’s super special. He’ll do something. I don’t know what he’s going to do. … It could be rolling out, throwing some pass 50 yards downfield on a dime, making some cut, making some catch. He can literally do it all.”

Recruiting the sons of Pro Bowl linemen has been an effective strategy for Michigan. The Wolverines lost one when defensive tackle Christopher Hinton declared for the NFL Draft, but they have another ready to emerge in Jenkins, whose father played a decade in the NFL for the Panthers and Jets.

“Just look out for Kris Jenkins,” said Smith, who plays next to Jenkins on Michigan’s interior defensive line. “He’s been working hard. Y’all heard him a lot last year, but I think he’s going to be a big deal. I really do.”

Jenkins is listed at 285 pounds heading into his third season at Michigan, up 20 pounds from when he arrived on campus. He’s not the mammoth nose tackle that his father was, but he played meaningful snaps against the best teams on Michigan’s schedule last season and didn’t look out of place. With another year of physical development, he should be ready to lock down a spot in the middle of Michigan’s defensive line.

“He’s just really strong, really athletic, really dialed in, really explosive,” Smith said earlier this summer. “Some guys you wouldn’t expect him to knock back, he’s going to knock back every time. Every time. You take a look at him, he’s a little lighter. But nobody feels that. It’s like he’s been playing D-line and playing inside his whole life.”

Some players make these breakout lists because they finished the previous year on a high note. For other players, it’s just time. The latter applies to McGregor, a borderline top-100 recruit from Port Huron, Mich., who is entering his third season at Michigan. McGregor spent his freshman season recovering from a knee injury and played behind two picks in the NFL Draft last year. With no obstacles in his path and a wide-open competition at the edge spots, this feels like now-or-never time for a player with big-time potential.

Describing his goals for the season, McGregor said he wants to “lead the team in sacks and be that David Ojabo-type player, be in there disrupting passes, and hopefully be able to do it all.” That would represent a huge leap for a player with five career tackles, but Ojabo’s 2021 season is proof that it’s possible. McGregor is going to get his shot, and it will be up to him to make the most of it.

When in doubt, go with the five-star recruit. Harbaugh and defensive backs coach Steve Clinkscale have made it clear that Johnson is going to play as a freshman. How much he plays, and in what role, will be determined in preseason camp and beyond.

With Turner penciled in as a starter at one cornerback spot, Johnson could be competing with Gemon Green for snaps on the other side. Green has experience, but Johnson’s natural ability will make it hard to keep him on the sideline. Johnson is 6-foot-2 with the length to lock down bigger receivers and disrupt a quarterback’s passing windows, valuable traits for a defense that wants to force more turnovers. He’ll have the same learning curve that applies to all freshmen, but if Johnson maintains his trajectory from the spring, his breakout moment could come early.

“He didn’t come in thinking he was too big or anything,” Turner said. “He was willing to learn and willing to work.”

Near the end of his breakout session at Big Ten media days, Harbaugh picked up the nameplate in front of him and dropped a hint about the jewel of Michigan’s freshman class.

“It’s a good group of football players,” Harbaugh said. “I’ve got one I think is an absolute gift from the football gods. I’m going to write it down on a piece of paper here, seal it, and just see if I’m not right.”

Was he talking about Darrius Clemons, the 6-3 wide receiver who shined in Michigan’s spring game? Amorion Walker, another wideout with huge potential who flipped from Notre Dame on signing day? Derrick Moore, the top-100 recruit from St. Frances Academy who arrived on campus looking the part of a Big Ten pass rusher? Kenneth Grant, the 356-pound nose tackle with speed and agility that belie his size?

All could contribute this season, as could several other members of Michigan’s 2022 recruiting class. Perhaps the answer to Harbaugh’s riddle will become apparent with time, but for now, let the speculation commence.