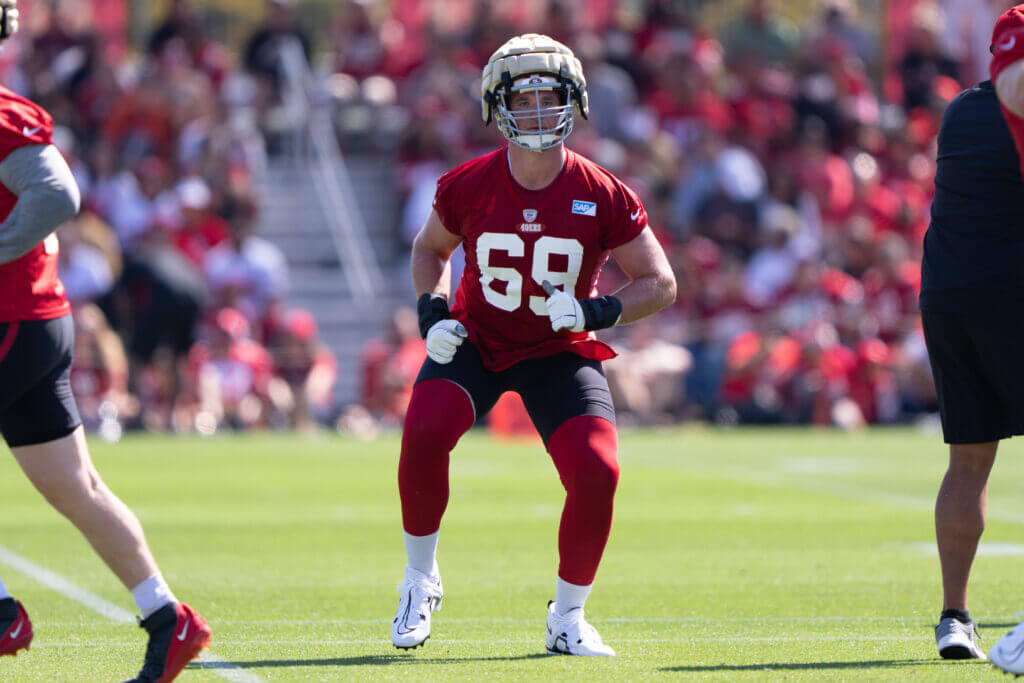 That was a difficult game over the last two seasons considering how far the 49ers’ right tackle swung in terms of heft. In 2020, he dropped as low as 290 pounds — then cornerback Richard Sherman called him “The Big Slim” — but worried his pass protection suffered as a result. The following season he bulked up to a more immoveable 315 pounds but felt that was too high.

Now he’s back where he started — about 309 pounds before practice and maybe 305 pounds after a particularly hot, 90-minute session.

“It all goes back to when you re-evaluate your film,” he said on Wednesday. “And I had a lot of time to do that being that I got (forced) out (after) Week 8. I think that as much production as I got last year, I still felt I could do things a little bit better. I’m back to playing the weight I always played at. … That’s where I played my best football at since I was 18, 19 years old and that’s where I’m going to stay.”

McGlinchey said he feels good and is moving well.

He suffered a quadriceps tear Nov. 7 against the Cardinals, an injury that forced him out of action through the recent spring practices. He’s being eased into training camp as a precaution but says he feels healthy enough to play every snap.

“Feel I’m moving faster, more explosive, stronger, all that stuff,” he said. “All those cliches you want me to spit out right now.”

One of his summer tasks is develop cohesion with a possible new starter at right guard, rookie Spencer Burford. The fourth-round draft pick has taken all of the first-team snaps through the first seven practices and is becoming the favorite to start there against the Bears in Week 1.

“He’s done a great job being thrown into the fire,” McGlinchey said. “I think the guard position in our offense is one the most demanding we have probably outside of the quarterback position. They have a lot of things going on on the inside on top of having to go mano a mano with some of the biggest, fastest dudes that play in this league.”

Burford spent a portion of the summer training in Houston with left tackle Trent Williams. One of the things they worked on was running on an angle, something that’s required in Kyle Shanahan’s zone-blocking scheme and something he practices daily alongside McGlinchey and the other tackles.

“You have to be athletic and to move in space and to understand the angles and the physics that it takes to block people and to block them with the timing of the play,” McGlinchey said. “Spencer’s starting to get that every single day. You see him move around more confidently. You see him attacking defensive linemen a little bit better in the run game. You see him setting with more confidence in pass protection.”

“Now he’s just got to hone those skills in over the next five or six weeks and put himself in the best position to help our team win.”

Some items from Wednesday’s practice:

• Trey Lance had another ugly stat line in going 3-of-9 in team situations, although he didn’t get much help from his pass catchers. Elijah Mitchell dropped a short pass early and another short pass to the left sideline went off JaMycal Hasty’s hand and fell incomplete. Lance also looked like he threw a catchable pass to Deebo Samuel deep down the left sideline against Emmanuel Moseley, but the receiver couldn’t haul it in.

Lance did rally during a red zone drill at the end of practice. He rolled to his right and hit his favorite target, Brandon Aiyuk, on a touchdown pass in the corner of the end zone. (It should be noted that linebacker Fred Warner came zipping into the offensive backfield, and as he was heading out of bounds he announced to the assembled reporters, “That’s a sack.”) Lance followed that throw with a quickie pass to the left to Hasty, who outran defensive end Samson Ebukam to the pylon for a touchdown.

Fred Warner must juggle a lot of responsibilities at the MLB position…. pic.twitter.com/aCZfnj4WhO

• Wednesday’s practice didn’t have nearly the intensity of Tuesday’s fight-filled session. The 49ers were in shells after fully padded practices on Monday and Tuesday. But there were still some hurt feelings, particularly during a one-on-one coverage drill pitting the safeties and linebackers against running backs and tight ends.

The most intense matchup involved rookie safety Leon O’Neal Jr. and tight end Tanner Hudson. O’Neal was too aggressive at both the beginning and end of the play. He tried to jam Hudson at the line but missed, which allowed Hudson a clear path to the corner of the end zone.

Brock Purdy threw a nice ball in the corner and Hudson caught it. Well after Hudson had fallen out of bounds with the ball in his hands, O’Neal tried to punch the ball free and in doing so popped the tight end in the chinstrap a couple of times. An upset Hudson slowly walked back to the huddle, then confronted O’Neal about his rough play. The exchange grew heated and safety Talanoa Hufanga had to play the role of peacemaker and get between the two. (Words, not blows, were exchanged).

• Hudson went on to have a terrific practice, his most prolific of training camp. He caught four passes from Purdy in 11-on-11 drills, including a red-zone touchdown. His longest catch came down the left sideline. The pass probably should have been intercepted by speedy rookie linebacker Marcelino McCrary-Ball, who had good position. Hudson, however, came back for the ball and snatched it over the linebacker’s shoulder.

The 49ers’ first two tight ends in camp have been George Kittle and Ross Dwelley. They’ve been practicing in recent days without Charlie Woerner (core muscle) and Jordan Matthews, who tore his ACL this week and is out for the season. The remaining tight ends are Tyler Kroft, Troy Fumagalli and Hudson, who might have the best hands of that group.

• The 49ers’ defense notched its 12th interception in team drills this summer when Purdy’s throw to Taysir Mack went through the rookie receiver’s hands and into Deommodore Lenoir’s. The second-year cornerback returned the gift for a touchdown.

Lenoir’s close friend, Ambry Thomas, also grabbed an interception during one-on-one drills when he outdueled Jauan Jennings on a fade-pattern throw from Lance. Thomas hasn’t been particularly stout in 50-50 situations. That he won Wednesday’s battle — against the physical Jennings, no less — was a good sign for the cornerback.

• Safety Tarvarius Moore has been prominent in each of the last three practices, a sign that he’s rounding into form following last year’s Achilles tear. On Wednesday, he was the strong safety — ahead of Hufanga — when the first-team defense initially took the field and later took some first-team free safety snaps in place of Jimmie Ward.

Meanwhile, rookie Samuel Womack III took a few plays at nickel cornerback with the first-team defense instead of veteran Darqueze Dennard. After practice, defensive coordinator DeMeco Ryans warned not to get too caught up in which players were running with certain units.

“We want to see guys get in and compete against everyone,” he said. “Nobody’s a set 1. Nobody’s a set 2 or 3 right now. Everybody is competing, so we’re going to mix a lot of guys in right now.”

• Kittle, Nick Bosa and Dre Greenlaw were given so-called “maintenance days” and didn’t practice. Neither did defensive tackles Arik Armstead (knee) and Hassan Ridgeway (quad), offensive tackle Jaylon Moore, linebacker Demetrius Flannigan-Fowles and receiver Marcus Johnson, who was on the receiving end of a dubious hit from Warner on Tuesday.

Running back Jeff Wilson Jr. was back in action after missing the last two practices. Defensive tackle Javon Kinlaw had his most extensive practice of 2022.

• Jimmy Garoppolo may be outstripping the side field he’s been using to get his throwing arm back to full strength. That artificial surface field is used for an array of activities and space is at a premium. On Wednesday, Garoppolo threw on one of the two grass field with his throws reaching 50 yards in distance. He’s looked a little more comfortable each day he’s thrown, and his passes — especially at the end of the sessions — seem to have his usual zip.

Reporters have been barred from filming those sessions, which seems odd considering the 49ers are trying to get another team to trade for Garoppolo.

• Aiyuk continues to be the best receiver on the field. Ward, in fact, went even further with his praise of the third-year wideout.

“Right now he’s having an outstanding camp,” the safety said. “I feel like he’s having the best camp out of everybody on this team, offense and defense. OK, beside Bosa. Bosa’s Bosa.”

What do Premier League managers blame after a bad result? And who makes the most excuses?