ARLINGTON, Texas — It took some time, but we may have one of our first Mike Elias quotes that will be mentioned repeatedly during his regime and perhaps long after.

It may not have the staying power of Syd Thrift’s all-time beauty about the Orioles seemingly offering “confederate money,” during free agency, but it has the chance to at least rival Andy MacPhail’s “front-office malpractice,” about managing service time and Dan Duquette’s “getting the band back together” quip after assembling a front office of older baseball executives.

Elias’ instant classic was uttered Wednesday morning while talking to Orioles reporters in the visiting dugout of Globe Life Field.

“While I’m super excited about 2022 and what’s ahead of us and our chances, we’re going to continue with the plan of building for this bright, long future in the American League East,” Elias said. “I think we’re right there.”

Then he dropped the money line:

“I think it’s liftoff from here for this team.”

Ponder that one: “Liftoff from here.”

It was Elias’ way of saying he believes in this surprising club now and in the future — something he wanted to stress after trading away team leader Trey Mancini and closer Jorge López for six minor-league pitchers at the trade deadline.

Those actions gave the impression to some that Elias was giving up on the season and, perhaps, that the days of competitive play — and a commitment to adding to this core — were still a couple of years away.

Elias made a declaration about that on Wednesday, too.

“We’re going to be signing players this winter,” Elias said. “I’m very excited about it.”

We’ll see about that, of course. The money has to be there from ownership and the interest must exist from legitimate free agents. A two-way equation. That’s a discussion for another day.

For now, it’s all about, “liftoff from here.”

Print the T-shirts and bumper stickers. Slap it on a set of Orioles coasters and give ’em away in September. 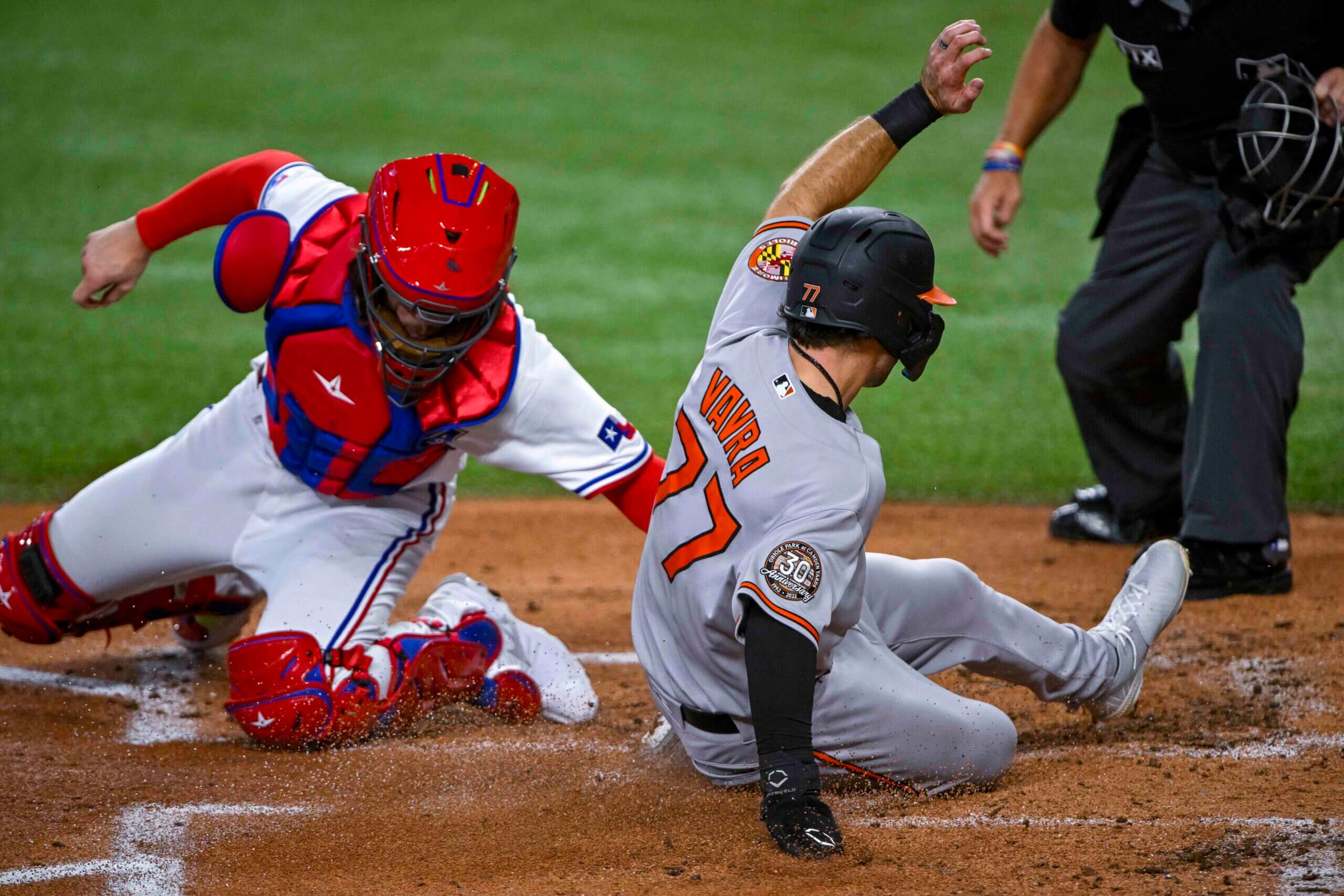 A night flight to say the future is bright

It is interesting Elias chose to fly into Texas hours after Tuesday’s trade deadline and speak to individual players before a getaway, afternoon game Wednesday.

He easily could have waited until Friday’s game in Baltimore to assure the players that they had his support. But he chose to address the club’s direction both immediately and face-to-face. Since he needed to be in Baltimore with his scouts and analysts during deadline talks, he decided to meet the team on the road once he was done.

“You can’t bring the whole front office to a hotel room. There are just too many people involved at the trade deadline, so we stayed set up in Baltimore,” Elias said. “I was able to talk to Trey and Jorge on video the last couple of days, but I wanted to talk to some of these guys in person and watch the team play.”

Publicly, the Orioles players said all the right things about this week’s trades, but, understandably, there was some internal grousing about the Orioles’ current run not being supported by management. Specifically, Elias’ comments that there wasn’t a high probability the Orioles would earn a wild card spot this year.

Elias said Wednesday, “of course, there’s a concern” that the wrong message was sent by the trades, so he wanted to make sure he answered any questions the players might have. He met briefly with several Orioles including Cedric Mullins, Ryan Mountcastle and Austin Hays.

“It shows we’re invested in our players and we’re gonna do everything we can to take care of them and communicate with them,” Orioles manager Brandon Hyde said. “That we not only care about them as professionals, but we care about them as people, also. I think that’s super important for a player to know and for Mike to take the time to come here and to talk to some guys individually, I think that showed a lot.”

The cynic might say that Elias was doing some damage control, making sure he didn’t lose his most important players due to the wild-card-probability comment. Hyde, for one, dismissed that notion.

“I don’t think it was damage control,” Hyde said. “I think it was just communicating with them on where we are as an organization and how excited he was about how well they’re playing.”

One other comment from Elias’ scrum that’s worth passing on. In his three-plus years as GM, he has never put a timeline on the club’s rebuild. He has never said it would take three years or five years or seven. He reiterates that the organization is improving, and the facts back that up.

It’s been a smart play because critics can’t point to any broken promises or unfulfilled goals.

On Wednesday however, Elias briefly mentioned a timeline — one of consistent competitiveness starting now.

“This is a decade-long window that I think is opening up, and I couldn’t be more excited about it for Baltimore, for the Orioles, for these guys,” Elias said. “And it was the most important thing to us that we prioritize this long window that we feel is ahead of us, among all other considerations.”

The Orioles’ most recent competitive window lasted five seasons, from 2012-2016, when they had the best combined record in the American League. Elias is hoping this one is twice as long. That’s exceptionally optimistic, especially in the AL East without a robust payroll. Elias, though, has focused on the need for sustainability and not the occasional blip of good baseball.

So, I suppose, consider that window open.

What help is coming?

Elias stated the Orioles would have reinforcements from the minors that will help within the next two months. But who will they be?

Rodriguez has been on the injured list since June with a Grade 2 lat strain, but Elias said the 22-year-old has been throwing on flat ground from 120 feet and is improving. Initially, it looked like Rodriguez might be shut down for the season, but Elias said Wednesday, “I would probably increase our desire to get him onto a game mound before the year is over than at the time that I made the announcement of his injury. I think we’re hoping for that.”

I’d expect it to happen in the minors, however, and not with the Orioles.

Hyde and Elias placed a joint call to Hall on Wednesday morning.

“Wanted to encourage him that we’re counting on him. I think that, as expected, he’s had a real up-and-down experience in Triple A. And I think that’s the type of talent he is. He’s been inconsistent, but he immensely gifted and immensely equipped to be a great big leaguer, and he’s right there,” Elias said. “I do plan on, and hope on, him helping this team this year. But we need him to be consistent in Triple A. He’s learning. He understands. And I think he’s going to be all the better for having these last two poor starts and adjusting to them.”

How about Triple-A outfielders Kyle Stowers, who made his MLB debut in June, and Yusniel Diaz, who struck out in his first big-league at-bat Tuesday and then was demoted to Norfolk on Wednesday?

“I think those guys may get opportunities here in the near future,” Elias said.

He said he’d, “like to see (Diaz) perform better in Triple A,” and that Stowers is, “certainly somebody that we are getting into the mode where we have daily discussions about bringing him up, and it could happen at any time.”

Break up the Orioles — again

So much for the Orioles falling apart after Mancini was traded. They said goodbye to their longest-tenured player Monday and then won three straight to sweep the Rangers in Arlington. None was close: 7-2, 8-2 and Wednesday’s 6-3 win.

“I think our guys did a great job of understanding what’s still ahead of us,” Hyde said. “We’re gonna miss those guys, there’s no doubt. They’re friends and great teammates and they’re hard to replace. But also, we still have a season to play and our guys are playing to win and they’re still playing with confidence.”

Earlier this week, with the trade deadline occurring, Hyde delivered the same message in a team meeting. And it seemingly has resonated with this close-knit group.

“We don’t take anything for granted. We know we play in a tough division, but I think everybody knows in this clubhouse we’re good,” said reserve catcher Robinson Chirinos, who had three hits Wednesday, including his third homer of the season. “We’re good and we can compete, and we can play against the best teams out there.”

Not bad for a club that “lost” at the deadline. And hasn’t lost since.

While the Orioles subtracted Mancini and López from the big-league roster, Elias did add a big leaguer: 28-year-old outfielder Brett Phillips, whom the Orioles acquired for cash from the Tampa Bay Rays on Tuesday afternoon.

Phillips, a career .190 hitter, is known for his glove, his speed and his infectious enthusiasm. The Orioles experienced that on Wednesday, as Phillips hugged or shook hands with everyone he met.

“It looks like a great group of guys and I’m excited to join this clubhouse, The energy, the way these guys are playing baseball. I mean, it’s night and day from last year, last couple years. And I’m excited to be joining (them),” Phillips said. “I’m here and I’m looking to win a World Series with the Baltimore Orioles. That would be freaking awesome.”

Phillips struck out in both of his at-bats Wednesday.