Who was the guy: Max Domi stepped up when it mattered most for Carolina. He was one of the more unlikely offensive sources after having scored just two goals and seven points in 19 games since the trade deadline. And in this series, he had just two assists. But he had a direct influence on each scoring play Saturday, first with the primary helper on Teuvo Tervainen’s opening goal and two goals of his own. It took one playoff game for him to match his regular-season goal total with the Hurricanes.

So a DOMInating win for Carolina, then. Now, to Lightning-Leafs….

Was his game perfect below the surface? Absolutely not. But the results turned out to be the difference Saturday.

What was the key: We’ve put a lot of importance on goaltending this series, and rightfully so. The Hurricanes were missing the starter who helped get them here. And when Antti Raanta left a game earlier in this series with an injury, third-stringer Pyotr Kochetkov was forced into action. But in Game 7, Raanta finished with a .929 save percentage and stopped 1.4 goals above expected in all situations, according to Natural Stat Trick. That’s a quality start and a stolen win.

Key stat: In all situations, David Pastrnak attempted 11 shots — the most of any skater in this game. The Hurricanes were lucky only one beat them. Plus, five-on-five attempts were 21-14 in Boston’s favor with him on the ice, and his team had a 65 percent expected goals rate.

The moment it was over: Pastnrak made this a one-goal game with 21 seconds left in regulation and brought some tension to the final minute of play. Boston called a timeout to draw up a play to try to tie this one late. Brad Marchand was in prime position to extend the Bruins’ season just a bit longer had he redirected an incoming shot, but when he couldn’t.

The moment of the game: Trent Frederic wrists a shot toward Raanta, but it rings off the post. Play continues and the Hurricanes push back up the ice. Teuvo Teravainen sends Domi a centering pass, and he scores from the slot to pull Carolina ahead 3-1. The Bruins would’ve tied the score had Frederic’s shot gone in. This almost was the moment it was over until Pastrnak made this a one-goal game, and ensured this game would remain tight until the end. Instead, it was a pivotal moment of the game that Frederic will probably think about all offseason.

Bruins worry meter: ☠️ … and now cue the speculation about Patrice Bergeron’s future to really crank up the worry meter.

Who was the guy: With Game 6 hero Brayden Point going down with an injury early, someone was going to have to step up for the two-time defending champs to advance. That someone, it turned out, was Nick Paul. The 2022 trade deadline acquisition scored both Lightning goals, was in on multiple other scoring chances and made a major defensive play. In the end, his 22:03 led all Lightning forwards in ice time. Paul entered this game with zero career playoff goals, which made sense because this was his first career playoff series. He left it a folk hero.

What was the key: It was predictable, considering he entered Saturday riding a streak of five consecutive shutouts in closeout games, but Andrei Vasilevskiy was lights-out for the Lightning. This time, he gave up a goal (and actually let two pucks get past him … but more on that in a moment), but he was still a wall, stopping 30 out of 31. Most importantly, he stopped all 17 shots he faced in the third period, including six on a crucial late penalty kill.

Key stat: Vasilevskiy finishing with 2.42 goals saved above expected. The Maple Leafs played well enough to win this game. But Vasilevskiy was even better, and Paul’s goals gave the Lightning all the cushion they needed in a trademark performance from their stopper.

The moment it was over: Not until the final buzzer sounded. This was one hell of a game. Exactly what a Game 7 should look like.

The moment of the game: Paul’s game winner — just three minutes after the Leafs had tied it — would certainly fit here, as could that third-period penalty kill sequence by Vasilevskiy. But we can’t write the story of this game without mentioning the John Tavares goal that was wiped away because of a Justin Holl interference penalty. It was a textbook pick play by Holl, and it certainly impacted the goal. The officials had to call it for that reason. But any time a goal comes off the board, it’s a huge moment in the game.

Maple Leafs worry meter: ☠️ … Now the big question is where do the Leafs go from here?

Lightning worry meter: ✌️ … Point’s injury casts quite the shadow going into an in-state series with the Panthers. But Vasilevskiy just showed why it’s hard to pick against him.

Who was the guy: Take a wild guess. Let me give you a hint, his first name starts with a C. With Leon Draisaitl far from 100 percent because of injury, Connor McDavid had no problem putting the Oilers on his back. McDavid was unstoppable in Game 7, registering a goal and an assist.

McDavid played 27:22, and finished with 12 shot attempts and a whopping 72 percent expected goal differential at five-on-five.

What was the key? The Oilers played a tight defensive game, limiting the Kings to just 23 shots at five-on-five. Breakouts were cleaner, there was no space for L.A. to use its speed on the counterattack, and the shots that the Kings did get were largely from the perimeter. Edmonton lost games earlier in this series despite having no trouble scoring, so it was huge that the Oilers limited L.A.’s clean chances and got strong play from Mike Smith to top it off.

Key stat: McDavid had six multi-point games in the series.

The moment it was over: McDavid’s gorgeous wraparound goal late in the third gave the Oilers a two-goal lead that felt insurmountable for the Kings, who were struggling to generate offense.

The moment of the game: Cody Ceci’s opening goal was when the dam finally broke. Edmonton was pressing the entire period, Jonathan Quick was battling, but the Oilers finally got one past him with a perfect shot and it came from an unlikely hero. 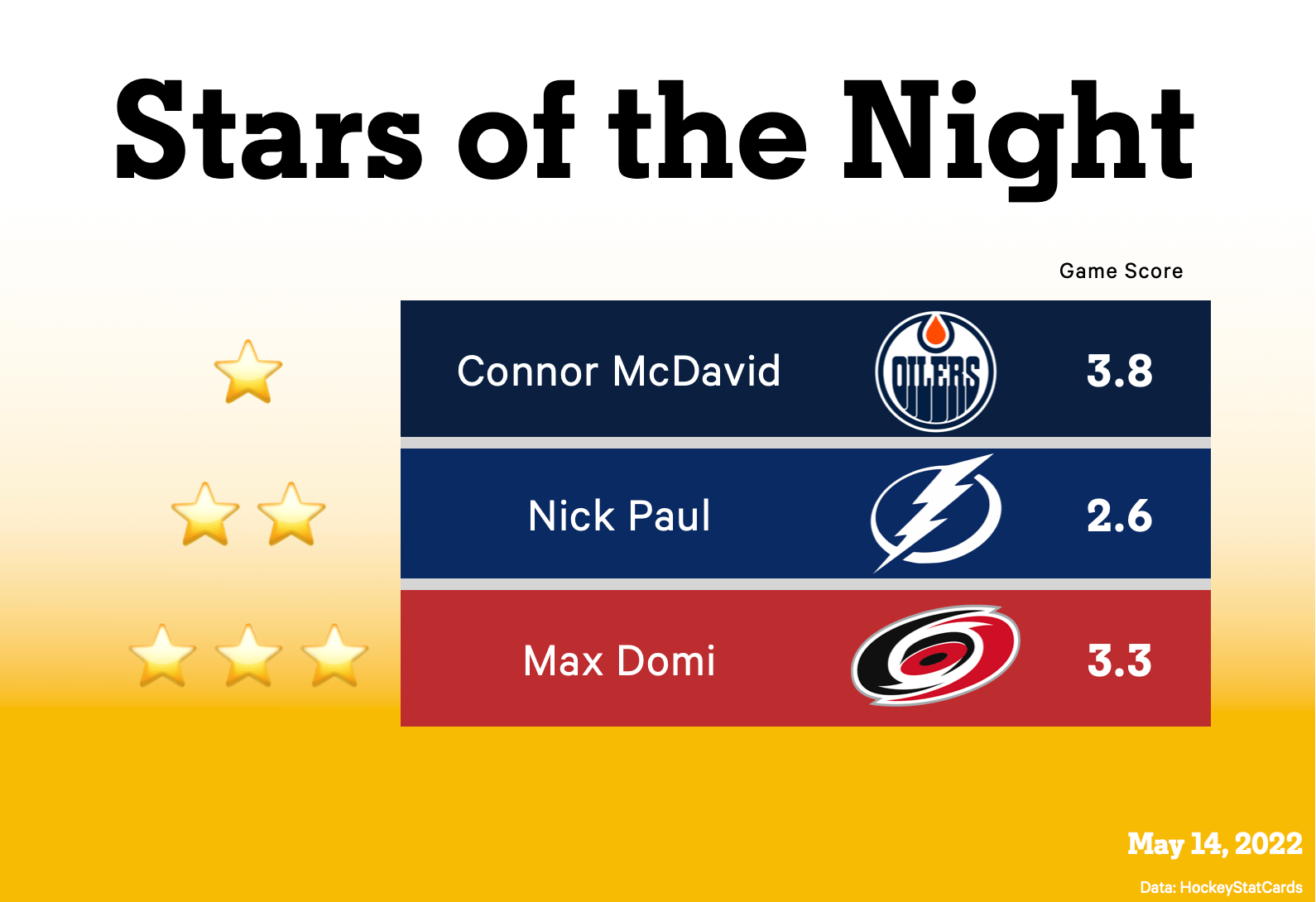 On tap for Sunday

How the Trail Blazers’ Joe Cronin might approach the No. 7 pick