Who was the guy? Antti Raanta was the difference-maker for Carolina on Wednesday. He showed up for all 60 minutes when the teammates didn’t. The Rangers were the better team through two periods and challenged him with some high-quality looks. But he turned aside 26 of the 27 shots he faced, earning a .963 save percentage. When the shot quality he faced is accounted for, he saved 2.12 goals above expected, according to Natural Stat Trick.

What was the key? It’s not how you start a game, it’s how you finish. The Hurricanes did not start this game well. The Corsi Canes got out-Corsi’d through two periods but battled back in the third. Carolina came out with adjusted line combinations in the hopes it would spark the club, and it evidently did the trick early in the period. The home team out-attempted the Rangers 22-9 in the third (which was played at five-on-five throughout) and generated 69 percent of the expected goals share. That pressure was kicked up a bit higher as time wound down, and that’s when Sebastian Aho cashed in. Carolina carried that over to overtime, out-attempting New York 6-1 and finishing on that last attempt.

Key stat: The Hurricanes were called for only one penalty, even while trailing for most of the game. Carolina was called for 331 penalties in the regular season and another 36 heading into Game 1. Though the Hurricanes have an elite power-play kill unit that can support their occasionally undisciplined play, the Rangers have a dangerous power play that can challenge Carolina. That’s why staying out of the box is so important in this series. Carolina was called for one penalty in the first, which the Rangers negated midway through with their own minor. After that, it was five-on-five play only throughout.

The moment it was over: When a game goes to overtime, we don’t have much flex here. It’s always going to be the winner. That one came courtesy of Ian Cole just over three minutes into overtime.

The moment of the game: Though the Rangers had numerous chances to build on that, Raanta’s strong play between the pipes kept them off the board. There was an opportunity for the visiting team to really firm its lead with another goal when Kaapo Kakko generated a chance with just over seven minutes left in regulation. He basically had an empty net but couldn’t convert. The puck went right through the blue paint. So when the Hurricanes managed to pull even just minutes later, it was clear that missed opportunity bit the Rangers.

Rangers worry meter: 🙃🙃 … The Rangers played two of their best periods of the season and still lost this game. That’s not ideal!

Hurricanes worry meter: 🤠 … And we were worried about goaltending for Carolina going into the playoffs?

Who was the guy? Mike Smith. Just kidding. Mikko Koskinen. Just kidding. Jacob Markstrom. Extremely just kidding. Of the many bizarre stats and moments and occurrences to come out of … whatever that was, we’re going to focus on one in this spot: 15 goals were spread out over 11 separate goal-scorers. That’s surprising, right? There were three multigoal guys by the end of this one, and just one of them had a hat trick. Matthew Tkachuk, take a bow.

All three of Tkachuk’s goals were crucial in their own way. His first, a second-period power-play deflection, put the Flames up 6-2; a few moments earlier, Markstrom made what might have been the only big save of the night on either side. The effect was a huge momentum swing. Tkachuk scored his second after he darted out of the penalty box to scoop up a loose puck in the Oilers’ zone. That pushed Calgary’s lead back to two goals, 8-6, with 12:05 remaining. We’ll talk about the third goal shortly.

That sort of top-end production was missing from the Flames’ first-round series against Dallas (in which 29 goals, total, were scored). Tkachuk was pulling a zero in the “G” column until Game 7. Now? He looks just fine. Throw in the, uh, extra engagement with Evander Kane before Goal No. 2 — and, really, throughout the game — and we got the full Tkachuk experience.

What was the key? It’s hard to pick just one, but the Oilers — in defiance of logic, everything about this game and their general identity as a team — went 0-for-4 on the power play. If you told me that we’d watch an Oilers game involving 15 goals and none from the Edmonton power play, I’d have to question your hockey knowledge. Alas, that’s what happened.

Edmonton’s five-on-five success was thanks, largely, to Markstrom; the Oilers put only 20 shots on him there, and their expected goals were a whopping 1.58, rather than the six they actually scored. Still, goals are goals — and the fact that a lethal power play put up a doughnut is both surprising and important.

Key stat: 1993. That’s the last year an NHL team scored six goals in a regulation-length playoff game and lost. That team? The Calgary Flames, in a 9-6 loss to the Los Angeles Kings. Also, that was the last playoff game in which both teams combined for at least 14 goals.

The moment it was over: Tkachuk’s empty-netter. And I’m not totally sold on that, either. Shoutout to Keith Tkachuk, by the way. This is a man who watched his son score three times, seemed to have a lovely night with the rest of his family and refused to be pressured into throwing his hat on the ice. When you get a good one, you hold on to it.

The moment of the game: With a special nod to Brett Ritchie’s goal at 6:05 of the first period to put the Flames up 3-0 and chase Smith, it was Rasmus Andersson, all by himself in the circle, beating Koskinen to break a short-lived tie.

And then Koskinen allows a goal within two minutes. That’s… something. pic.twitter.com/ldHtSeS9xB

Flames worry meter: 😬😬 … It’s worth stating outright: Calgary beat the brakes off Edmonton in most areas of this game. If this is the version of Markstrom the Flames get, it’ll be a problem, but his night felt more fluky than anything.

Oilers worry meter: 🥴🥴🥴🥴 … They’re down 1-0, and their issues coming out of this one aren’t as easy to explain. The Flames aren’t the Kings, either. 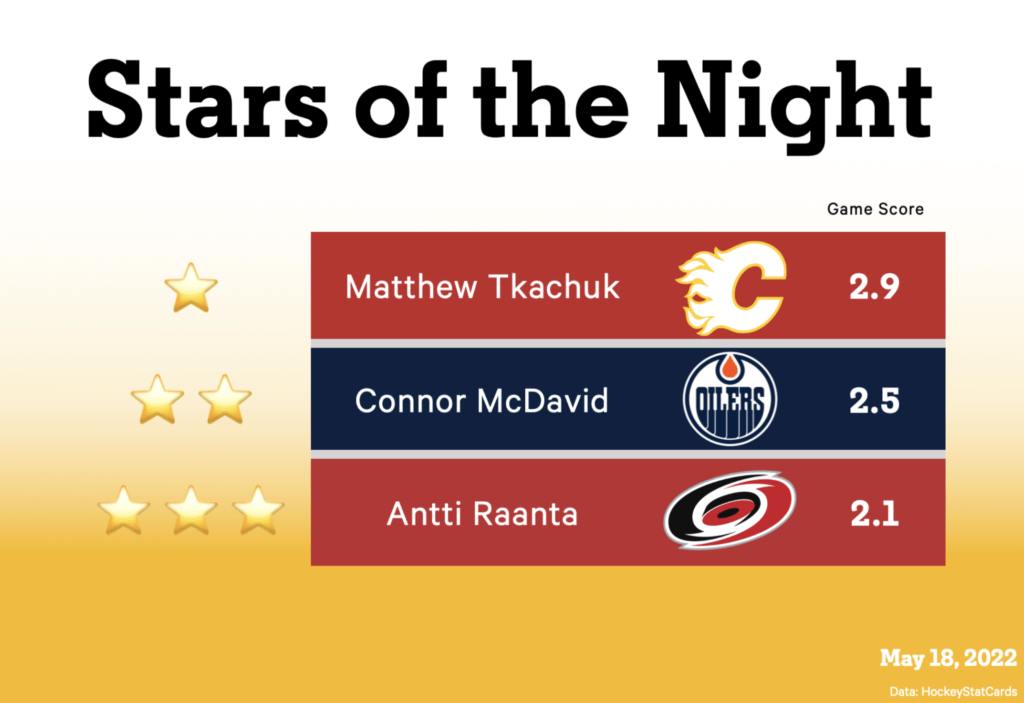 On tap for Thursday