Play-off games are so often cagey, nervous affairs. Particularly in first legs, where neither side wants to give anything away.

Under Steve Cooper, that is not the Nottingham Forest way. Since his appointment, they simply do not do ‘cautious’. Caution is thrown to the wind. Even against Premier League title challengers Liverpool, in the FA Cup quarter-final, Forest’s mentality was to chase victory.

At Bramall Lane, it was the same.

And, if Forest are to progress to their first ever play-off final, their best chance will come if they maintain that attitude again.

Cooper has succeeded where many of his predecessors have failed, by giving Forest an identity; a way of doing things. It is the reason why they are yet to lose at home in the Championship in 2022. It is why they pushed Bournemouth for second place, right until the final furlong.

And it is very definitely why they hold a precious 2-1 lead going into the second leg of this semi-final on Tuesday.

🗣 “The reality is that if somebody said before the game you’d get back on the bus with a positive deficit, you’d take it.

“The dressing room is really positive and we’re looking forward to Tuesday now.”

There will have been the slightest tinge of disappointment at the final whistle — that Forest were unable to take a significant lead into the second leg. It is no exaggeration to say it could have been 4-0 or 5-0 by half-time, such was Forest’s domination.

But, while they will feel that they should have had at least one foot in the final already, the best way for them to take that step is by doing exactly what they have done all season. They will not try to sit on their lead at the City Ground. They will not look to grind out a draw. They will go out to win.

That has to be the biggest source of hope for Forest fans because, in two visits to Bramall Lane this season, they could and should have seen their side score far more goals.

United could not handle Forest’s attacking unit, which saw Djed Spence and Jack Colback frequently push on down the flanks to support Sam Surridge, Brennan Johnson and Philip Zinckernagel.

Forest were not exactly direct, but they did get the ball forward urgently where possible; time and again they hurt United with their rapier counter-attacks.

Surridge and Johnson in particular frequently found themselves one-on-one with defenders. Both Forest goals came through their desire to push high up the pitch. The first came when defender Joe Worrall advanced out from the back to deliver a perfect ball for Surridge down the right. His cutback was good, picking out Zinckernagel and, when the Dane’s shot was saved, Colback was on hand to fire the rebound home.

The second, somehow, did not come until the 71st minute when substitute Joe Lolley robbed John Egan of the ball and rampaged into the box before the ball fell to Johnson, who produced the kind of finish that should not be expected of a 20-year-old playing in his first full season of Championship football. 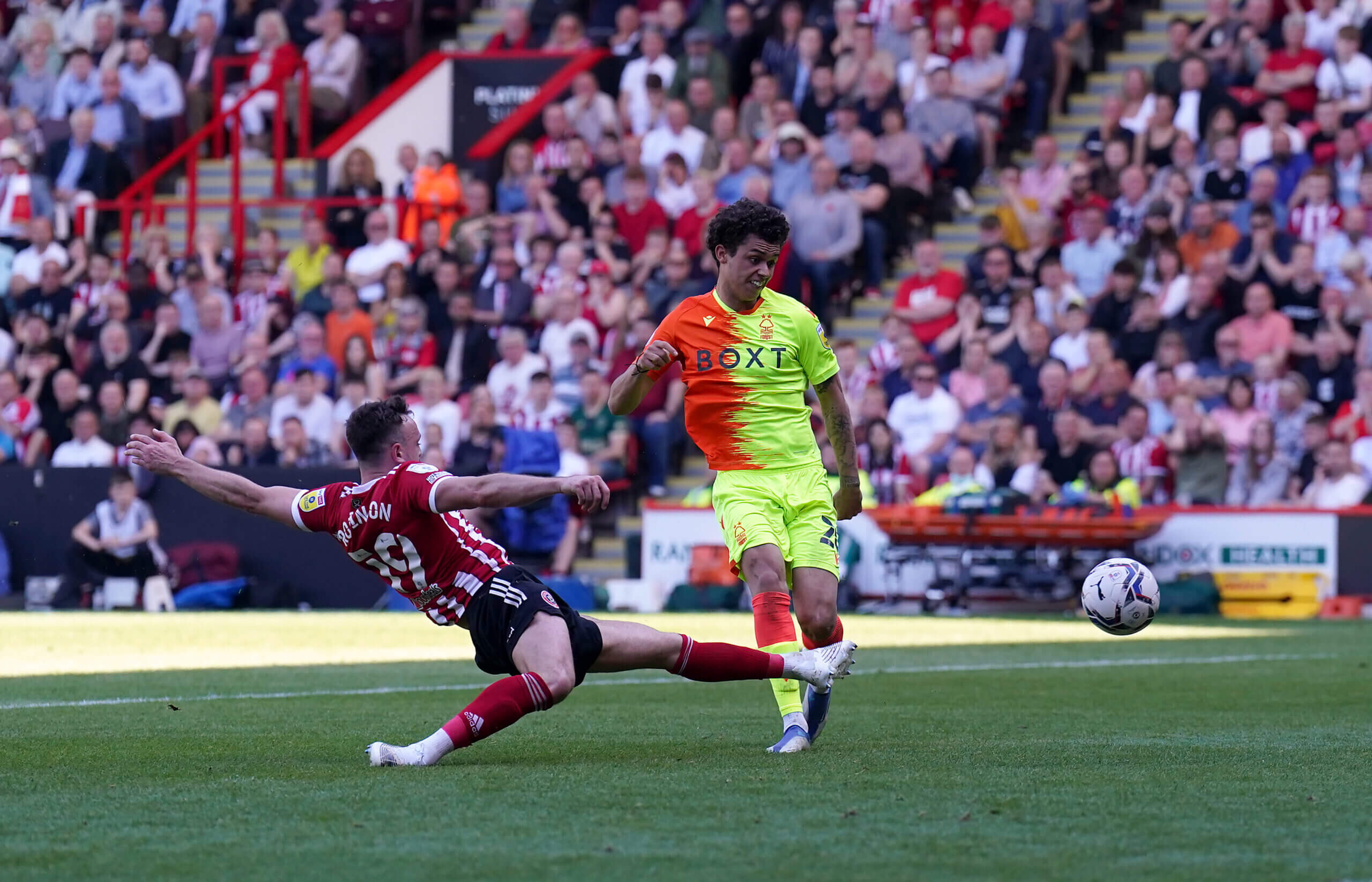 In between the two goals, you lost count of Forest’s opportunities. Surridge shot straight at Wes Foderingham, who then palmed over a Johnson effort. Ryan Yates planted a header wide. Wales international Johnson rolled a shot just past the post. Foderingham came to the rescue again with a double-save to deny Surridge and Johnson. Forest crafted another chance for Johnson, which was brilliantly blocked by Egan.

As Cooper pointed out himself, it would have made fine viewing for the neutral — even if he admitted to watching some of the game himself through his fingers.

It is hard to escape the thought this Forest side, with all their confidence and swagger, would be a welcome addition to the Premier League. If they are to get there — and that remains a significant challenge — it could well remain their biggest weapon. Belief, confidence and positivity are this side’s biggest assets.

It would be easy to focus on what might have been in Sheffield, but it is another aspect of Forest’s mentality to set their sights on what comes next.

They have suffered play-off semi-final defeat in the past to this season’s opponents, as well as Yeovil, Blackpool and Swansea. Forest have never made a final. Their best chance of getting there this season is to retain the courage of their convictions; to keep doing what they have been doing.

“I hope that performance was indicative of our attitude. That was definitely our intention. Somebody asked me before the game what would be a good result for us — we wanted to win,” says Cooper. “A draw would not have been a disaster. Even a narrow loss would not have been the end of the world. But we have tackled and challenged everything that has been put in front of us this season head-on. Let’s not change now.

“Let’s play the way we play, let’s work the way we work and believe in what we do — then see where that takes us. Sometimes we get it right, sometimes we do not. But we know what we want to do.

“We got into the play-offs with four games to go. We did not talk about that much because we were looking at automatic. But to do that means that you have done a lot of things well.

“You need to look at that, look at what you do and focus on doing what has got you here, even better again. We play attacking football, we create chances, we take risks.”

Forest will hope that a positive outlook will bring positive results as they seek to earn a place at Wembley and finally end their 23-year exile from the top flight.

The Northern Ireland protocol is said to be a blight on regional economy. That’s just not true