For the best part of an hour, Southampton were in limbo, caught between formations and styles and letting a listless drift overcome them.

The beneficiaries were Leicester City, 1-0 up but cutting a pale imitation of the side who inflicted that defeat at St Mary’s three years ago.

Ralph Hasenhuttl initially set his team up in a bottleneck 4-3-2-1, with Joe Aribo and Adam Armstrong heavily tucked in and inviting Leicester to play out wide.

But it became too routine.

After 20 minutes, Hasenhuttl called over Mohamed Elyounoussi, who had been playing as a lone No 10 behind Sekou Mara, and swapped him with Aribo to provide additional defensive cover on the right flank.

It worked to some extent but the shape became a flat 4-5-1, with Mara increasingly isolated and inhibited in transition. When Southampton’s wall crumbled following James Maddison’s free kick, they were on course to stretch the malaise to one win in 15 games and begin the new season with one point from nine.

But then on came Che Adams, back in the city where he was born and carrying a stony-faced expression that smacked of intent… 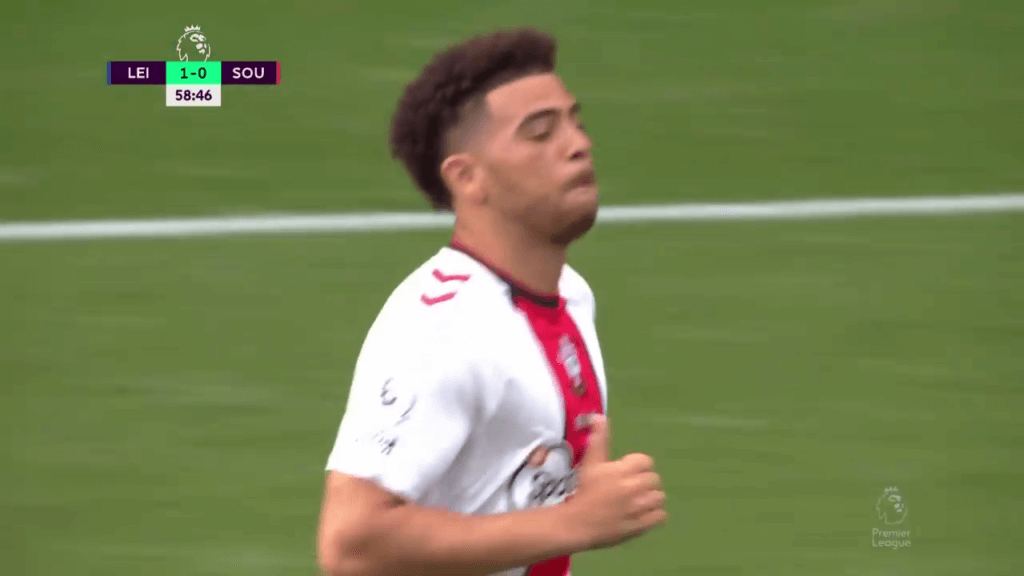 A groin injury meant he only returned to training 48 hours before the match, a situation which reduced his involvement in it to that of a substitute.

Those close to Adams had hoped he would be Southampton’s figurehead in attack this season, stepping up to fill the void left by the departed Danny Ings and Chelsea loanee Armando Broja in recent seasons. And yet, the club were willing to let him go in the current window.

Nottingham Forest’s long-term affections have cooled, while it was only last week that Everton wanted him in a loan-to-buy deal. As the Merseyside club waited for them to lower the asking price on a permanent agreement, Adams remained mired in uncertainty.

Less than two minutes after coming on, Adams’ first touch of the ball provided a glimpse of what was to come.

A long ball from goalkeeper Gavin Bazunu finds Adams, who pins Jonny Evans (to the right of the image below) and drives him backwards. This enables a cluster of white shirts around the ball, seemingly gravitating towards their striker. 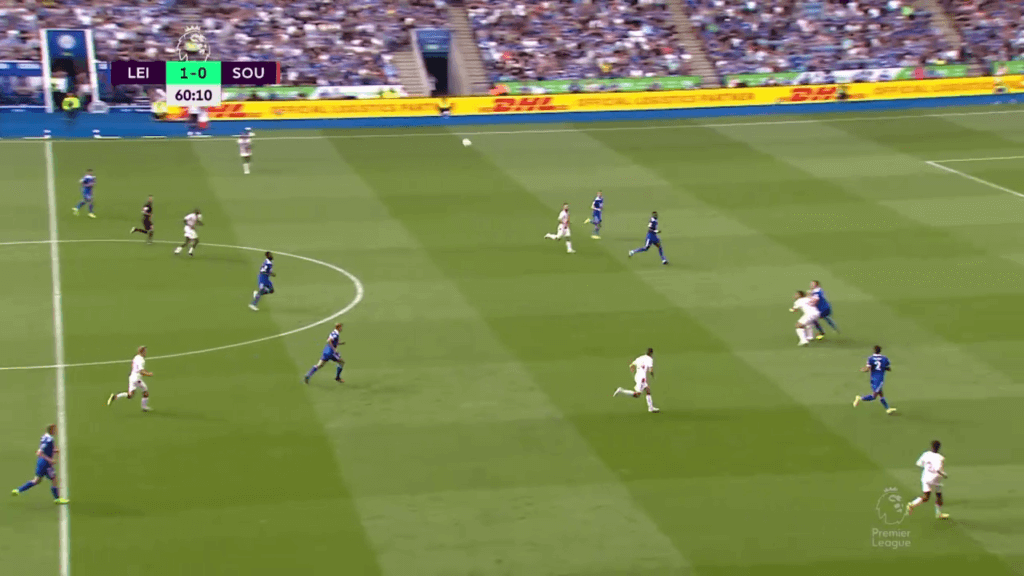 Having laid the ball back for James Ward-Prowse to play into space, Adams makes a second movement, spinning in behind and getting beyond Evans. 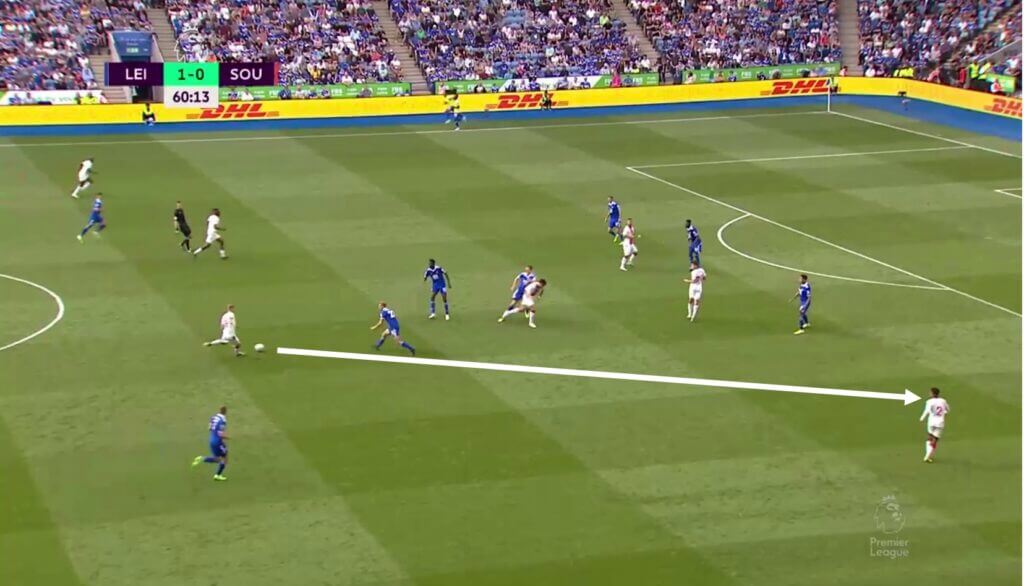 Then, when Mohammed Salisu’s hopeful throw is launched into the box, everyone else watches. Adams moves.

The strike is enough to beat Danny Ward and, in some ways, is a microcosm of Adams’ forward play; not always the most aesthetically pleasing, but unfailing in effort. 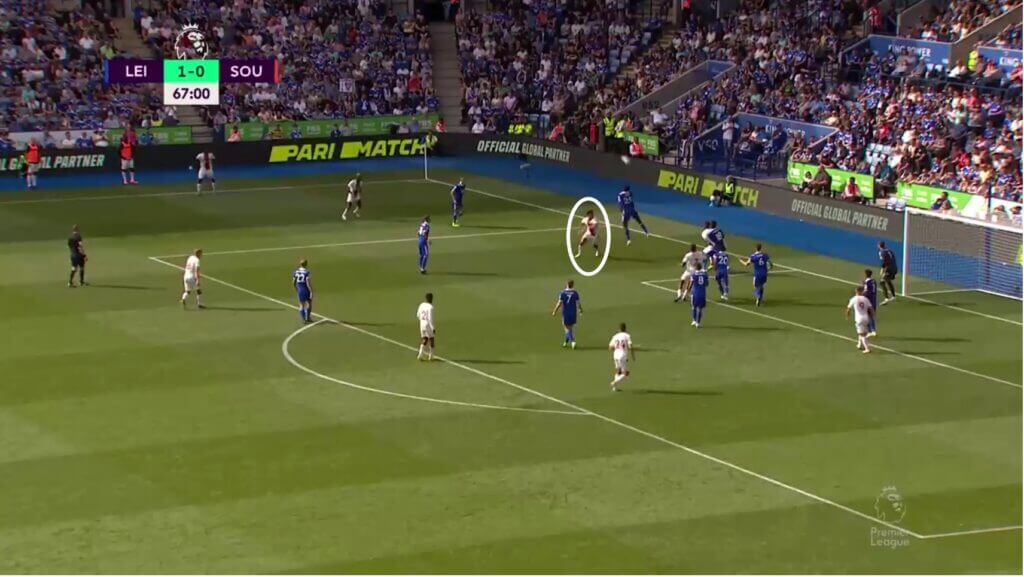 Adams runs towards the away support. Outwardly, the only show of emotion coming when he puts a finger behind his right ear. The gesture, perhaps, a symbol of recent events.

As team-mates celebrate, he remains expressionless. 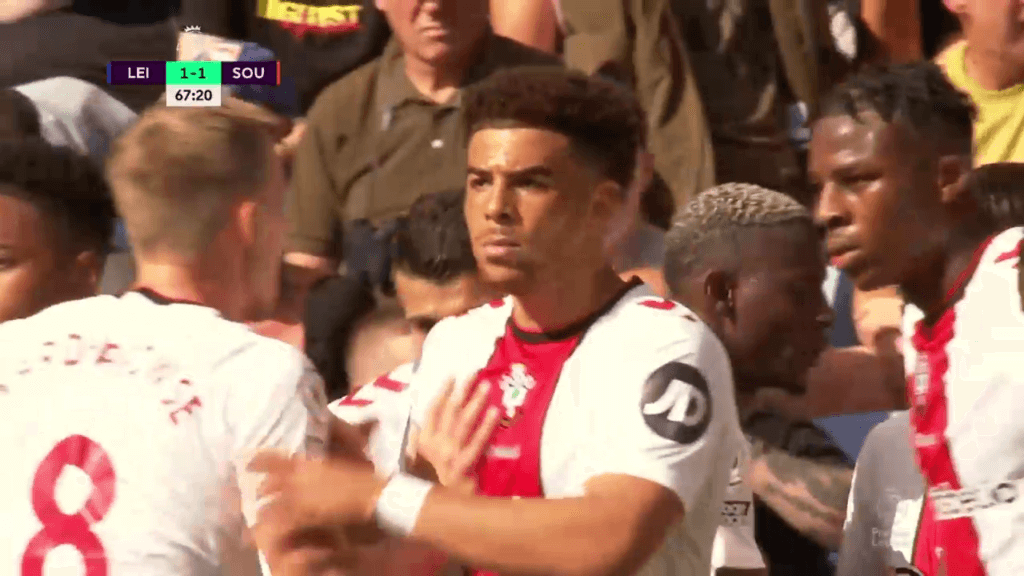 By this point, Leicester were malfunctioning and Adams did not let up.

The nose that had been put firmly out of joint by the transfer speculation sniffed another goal.

After a pass from Moussa Djenepo goes out of play, Adams shouts, making it clear where he thought the ball should have been played. 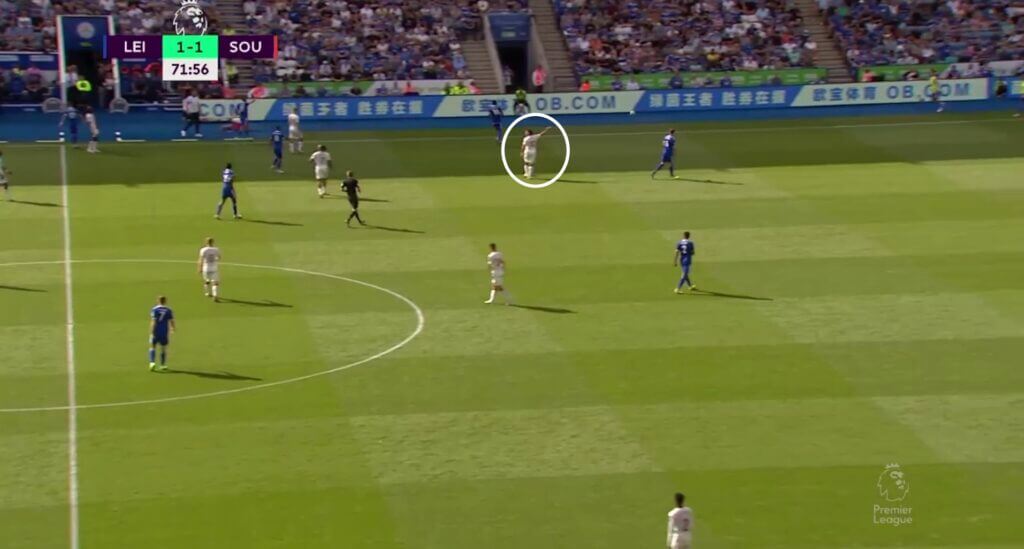 When Leicester have a relatively innocuous throw deep inside their half, Adams shuffled over into position quickly, demanding Aribo do the same and mark Wilfred Ndidi.

In the 75th minute, Southampton won a free kick in the attacking third, which brought their defenders up. Upon arrival, Armel Bella-Kotchap was met by Adams, who began pointing and giving instructions as to what his movement should be.

He then pointed again once the game resumed, directing Ward-Prowse to spread play out to Djenepo. Adams was demanding better, more streamlined service.

Eight minutes later, he got it — scoring his second of the game and conjuring arguably the most important moment in his Southampton career.

Kyle Walker-Peters has ventured deep down the Southampton right, instigating one of their more detectable patterns of play. The right-back waits for Ward-Prowse to support him from behind, then cuts the ball back for his captain to whip in a first-time cross. 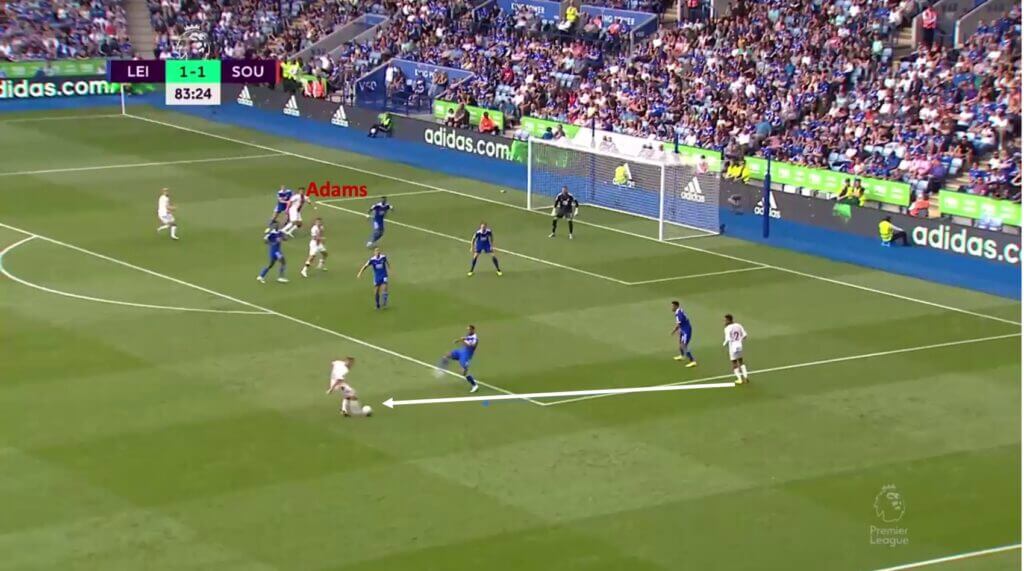 Adams gets between centre-back Daniel Amartey and full-back Timothy Castagne, pinning the latter in a similar manner to how he’d treated Evans earlier.

Under pressure, Adams adjusts his body and scissor-kicks the winner past Ward. 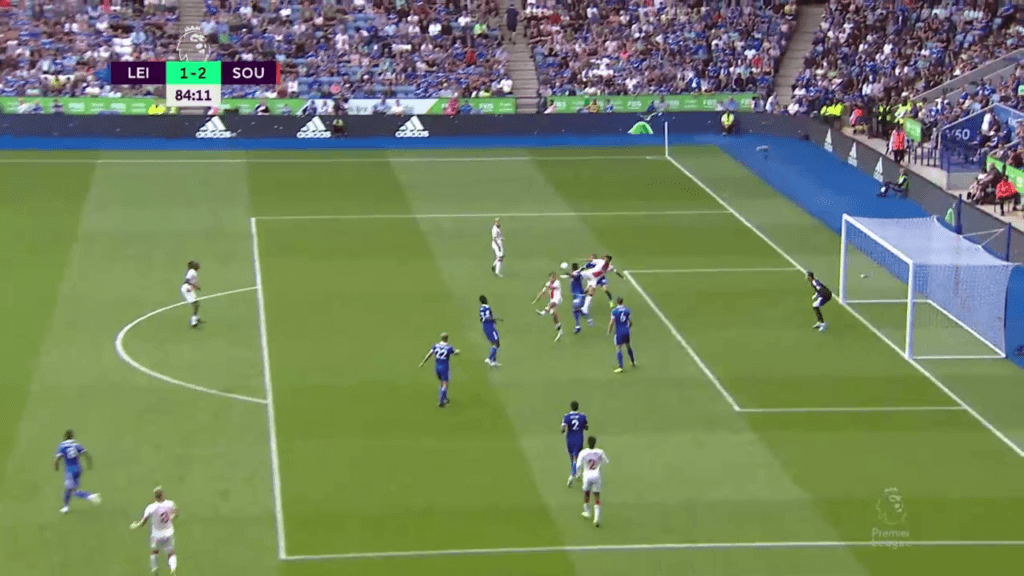 The subtle timings of his movement bore resemblance to the 3-2 win away to Tottenham Hotspur in February, where he scored one of two goals virtually identical in creation. Ward-Prowse was the provider then, delivering two sweeping crosses into the same area from the same position.

That victory in north London 192 days ago, incidentally, was the previous time Southampton had won on the road.

As boos rang around the stadium, Adams wheels away in celebration. This time he puts two fingers in his ears, either an imitation of what Ayoze Perez did three times at St Mary’s that night in October 2019 or perhaps needing an extra hand to block out the noise. 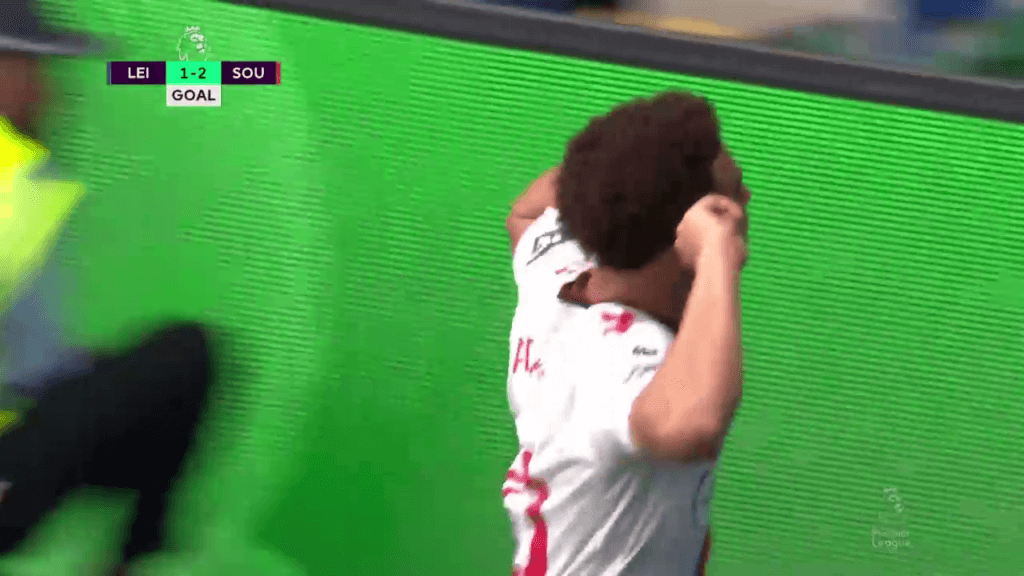 Only the post in the 93rd minute denied Adams a hat-trick.

He completed all 12 of his passes in the game, registering three shots and scoring those two goals.

Even when the full-time whistle blew, Adams did not smile. The change of expression did eventually come, once he stepped off the pitch and into a post-match interview.

Adams spearheaded Southampton’s youngest Premier League side — 23 years, 238 days — to a desperately-needed win. And in doing so, he may have reinvigorated his career at the club.

‘I stole CDs off the front of Reader’s Digest’: Myleene Klass’s honest playlist

Can you solve it? Could it be logic?