ATLANTA — David Robertson, wearing Cubs blue sneakers, talked Wednesday morning like a rambunctious kid. With one transaction followed by a commercial flight, he gained 13 1/2 games in the standings — and a second chance to do something for the Phillies. “I’m going to try to play this time,” he said. Then he tapped the wood dugout bench with his fist.

When the Phillies traded for Robertson on Tuesday afternoon, they knew there was a chance he’d be their only pitching addition. The quest for a back-of-the-rotation upgrade had stalled. If Robertson was it, the Phillies were content because he was the best-available rental reliever. He is 37 and throwing his fastball harder than he has in years. The spin on it right now is elite.

But Robertson is convinced there is a purpose to his winding two-year recovery from two elbow surgeries. It took him from a Rhode Island men’s league to the Olympics to Triple A, then to the majors with the Rays and Cubs — and now back to the team that gave him $23 million for 6 2/3 innings.

“Yeah,” Robertson said. “I definitely thought my career was over.”

He never saved a game with the Phillies during his injury-marred stretch with the club from 2019 to 2020. He fired 17 pitches Wednesday afternoon to seal a win over the Braves, and it was a long time coming. Robertson is excited to be with the Phillies because he feels as if he owes the organization something.

The Phillies are happy to have him. 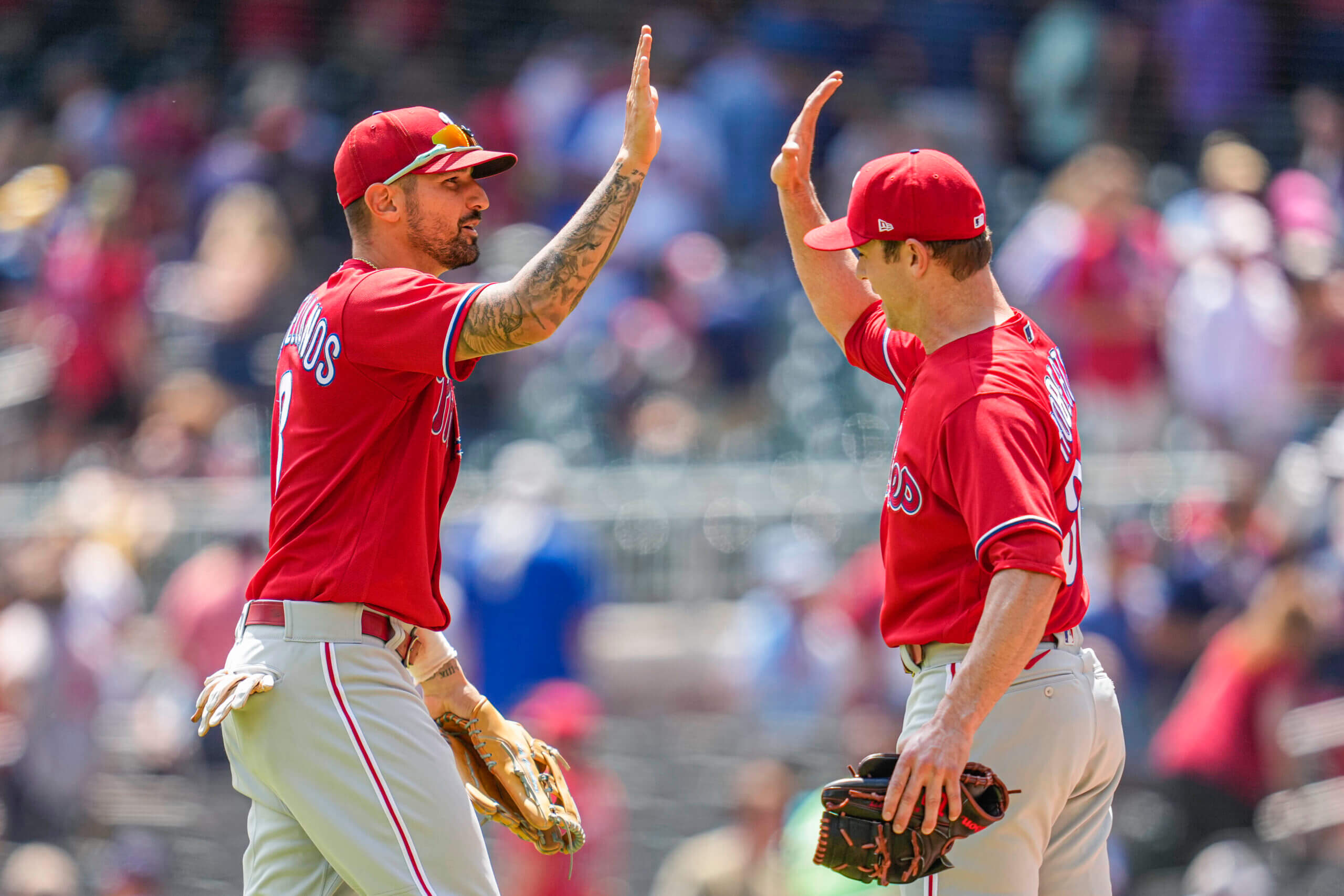 “Well, I mean, if the way that he threw today is any indication, it’s definitely a good boost,” said Nick Castellanos, who delivered a huge two-run homer in the 3-1 win over the Braves. “Also, it just continuously sends the message that winning is the expectation here with the additions. So that’s just more wind at your sails. I’ve been a part of a deadline where people are leaving the locker room instead of getting added. It feels good when you have established faces coming in.”

The Robertson acquisition, on its own, is an interesting one for the Phillies. But, in tandem with Noah Syndergaard’s addition to the rotation, it creates a favorable dynamic for the Phillies as they enter the stretch run. The rotation is deeper. The bullpen is deeper. Those two units can make each other better. If the Phillies want every pitcher not named Wheeler or Nola to be a five- or six-inning starter in the season’s final two months, they can do it because the bullpen is filled with weapons. Andrew Bellatti has struck out 37 percent of the batters he’s faced — the sixth-best strikeout rate among all MLB relievers — and he might be the seventh pitcher on the bullpen depth chart.

The bullpen is carrying an uncomfortable walk rate and Robertson won’t help that, but the caliber of stuff is as good as any bullpen in the majors. It’s important to analyze the deadline trades by assessing what the Phillies surrendered to gain what they gained, but part of the equation is who the acquisitions are replacing on the roster. Jeurys Familia had become a $6 million sunk cost. Robertson, then, represents a massive upgrade. He will be trusted with big spots in the seventh and eighth innings.

It just so happened that, on Wednesday, he was the closer. Interim manager Rob Thomson will reserve Seranthony Domínguez for the biggest moments in the game. Thomson decided the eighth inning, with the top of Atlanta’s lineup batting, was the time. Then José Alvarado entered to face lefty Matt Olson, and he extinguished a small mess Domínguez created.

“That’s probably the only time I’d go away from Seranthony,” Thomson said. “That’s how much trust I have. But that was the right matchup.” 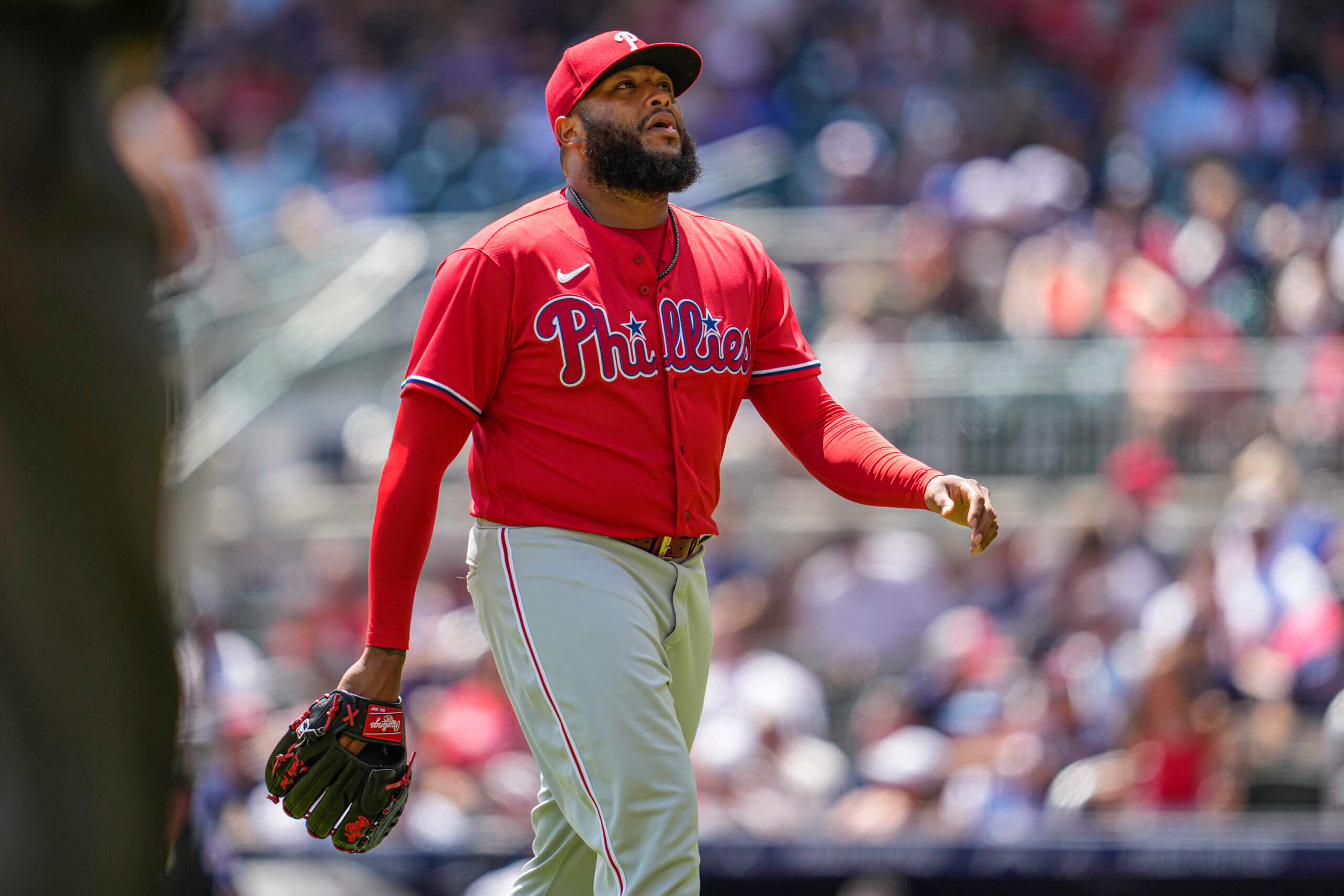 José Alvarado got Matt Olson to pop out with two men on and two outs in the eighth inning. (Dale Zanine / USA Today)

He trusts Robertson, too. And Brad Hand, who would have pitched the ninth if Olson didn’t bat in the eighth.

There are various scenarios now for Thomson.

“It’s great options, you know?” Thomson said. “And they get a feel for pitching in different endings, which is good because you’re not going to have everybody available every night.”

Robertson is as good of a reliever as the Phillies have added during a season in a long time. They have a decent bullpen, a fact that is difficult to acknowledge because the bullpen scars from recent years have cut deep. The mere mention of a bullpen game — which did not work Tuesday night against the Braves — elicits groans. But the Phillies are better equipped to try it. They hope to not have to do it, unless it’s for a doubleheader game.

Syndergaard will make his Phillies debut Thursday against the Nationals at Citizens Bank Park. He hasn’t pitched since July 25, so he’s rested. When he signed a $21 million deal with the Angels, part of his reasoning was the team’s commitment to giving him extra rest between every start as he confronts a full-season workload for the first time since 2019.

Syndergaard has yet to make a start on regular rest this season. Can he pitch every fifth day if needed? “Yes,” Thomson said Wednesday. The Phillies, if they stay in rotation, won’t even need Syndergaard to do it much. He could make as many as 12 starts with just four of them on four days’ rest.

The Phillies are better positioned to limit Syndergaard to five innings per start if they want to do that. He’s actually been 16 percent better than league average when facing batters a third time through the order. But the Phillies are cognizant of his workload; Syndergaard logged a total of 10 innings in the majors and minors from 2020-21. 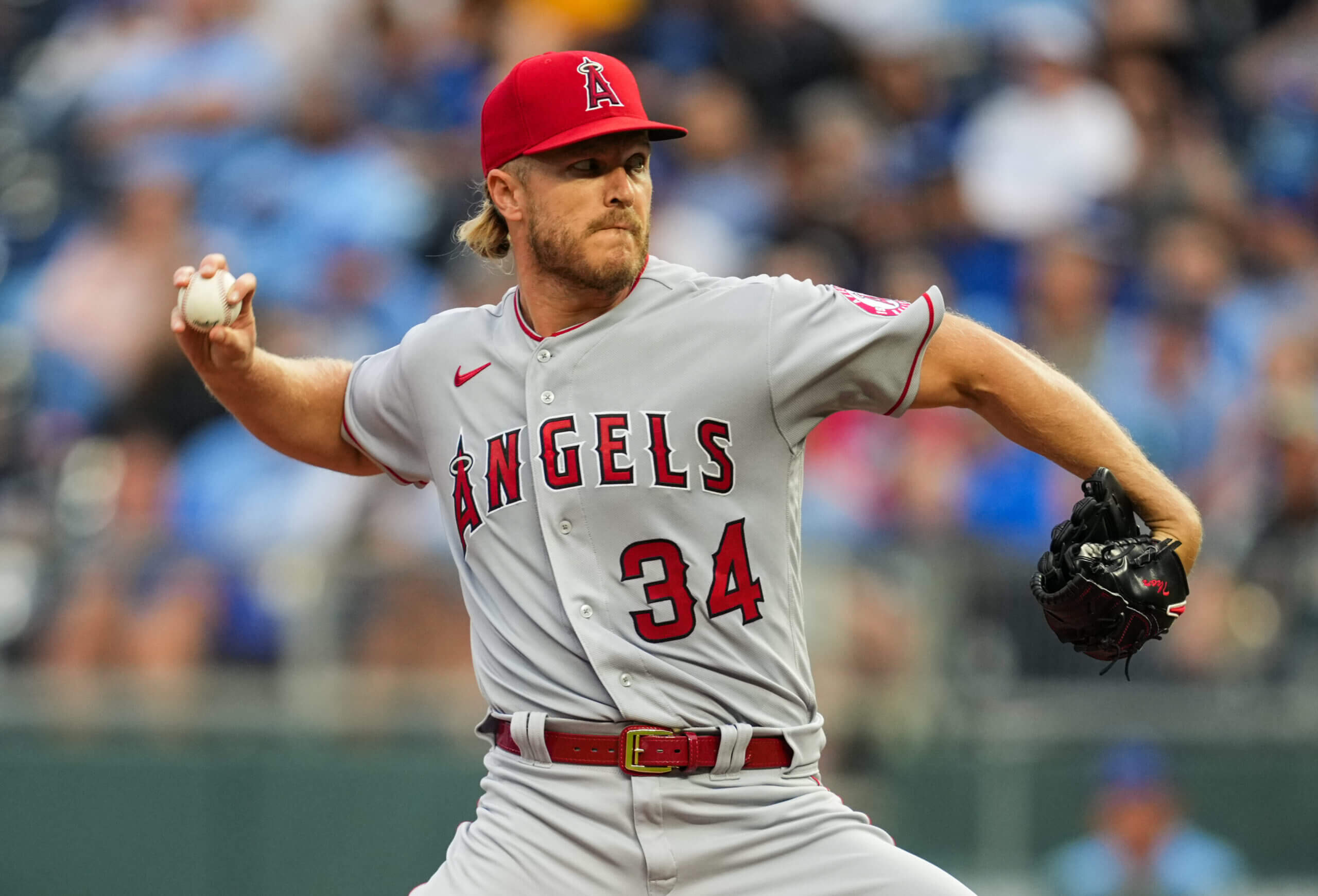 Noah Syndergaard allowed one run in 5 2/3 innings against the Royals in his last start on July 25. (Jay Biggerstaff / USA Today)

And, if the Phillies have starts of five innings on back-to-back days, they have enough trusted relievers to not overexert any. Robertson, on zero days’ rest, has a 1.93 ERA in 9 1/3 innings this season. That’s helpful because other Phillies relievers haven’t been as sharp when pitching the second of back-to-back days.

Robertson likened this situation to what he experienced in 2017 when he returned to the Yankees. He wasn’t the closer. He pitched in 30 games — mostly in the eighth inning and some in the seventh. He was a fireman for his manager at the time, Joe Girardi. Robertson posted a 1.03 ERA in 35 innings.

“This is a very similar situation,” Robertson said. “I’m going to try to keep doing the same thing here.”

Thomson is comfortable asking Robertson to face righties and lefties. The Phillies were impressed two weekends ago by the juice on Robertson’s stuff when he pitched against them. It’s not just the uptick in velocity — it’s the unusual movement and spin to his cutter that makes his pitches difficult to see.

It sounds insane, but the 37-year-old reliever with a reconstructed elbow compared his current stuff to what he was throwing in his prime, from ages 26 to 32.

“I think I feel that good,” Robertson said. “Maybe even a little bit better. The surgeries were successful. I definitely needed it. The decline in my stuff was happening. I think that overthrowing is what led me to be hurt. Since having everything repaired, I feel really good.”

After his save Wednesday afternoon, he stuffed his new Phillies gear into his old Cubs duffel bag. As for the blue spikes and sneakers, Robertson said he needed to talk to his agent about procuring some red pairs. (Robertson is his own agent; he negotiated a $100,000 assignment bonus into his Cubs contract because he expected to be traded at some point.) He is excited to be in the Phillies bullpen. Like, actually excited.

“I mean,” Robertson said, “this is what you play baseball for.”