It wouldn’t be a true documentary season without a new entry from the quixotic mind of Werner Herzog. The distinctive Bavarian director, who turns 80 a week ahead of this year’s TIFF, will visit the festival to screen “Theatre of Thought,” a study of the human brain that goes beyond the traditional boundaries of neurological inquiry.

“It’s a real science-meets-poetry kind of exploration,” TIFF documentary programmer Thom Powers said. “He’s exploring the landscape inside our skulls. He also asks if fish have souls and how a tightrope walker conquers fear. It’s an intersection of conspiracy theories, science, and imagination.”

Among the awards hopefuls at this year’s festival, Powers singled out opening night selection “Louis Armstrong’s Black & Blues,” from journalist and filmmaker Sacha Jenkins. Last year, the section opened with future Oscar nominee “Attica,” and Powers predicted that “Louis Armstrong” could “follow that same path.” The AppleTV+ documentary brings a fresh perspective to Armstrong’s legacy through intimate audio recordings that the musician made in addition to rare performance footage.

“This film found its right maker,” Powers said, noting that in tandem with its archival footage, the movie includes interviews with luminaries such as Wynton Marsalis and Amiri Baraka musing on Armstrong’s complex legacy. “They thought at first he pandered to white audiences, but they all describe an evolution in their thinking and recognizing his deep reservoir of talent and creativity that helped birth jazz music,” Powers said.

Another TIFF documentary with Oscar potential is “In Her Hands,” the Netflix-produced look at Afghanistan’s youngest female mayor, Zarifa Ghafari, who fled the country after the Taliban took back control last summer. An early production from HiddenLight, the unscripted production company launched by Hillary and Chelsea Clinton, “In Her Hands” premieres at TIFF as Ghafari prepares to tour with a new book. The movie is co-directed by Tamana Ayazi, who won the short documentary Oscar for “Learning to Skateboard in a Warzone (If You’re a Girl)” in 2020, and Martel Mettelsiefen, who was nominated in the same category for the Syrian doc short “Watani: My Homeland” in 2016. 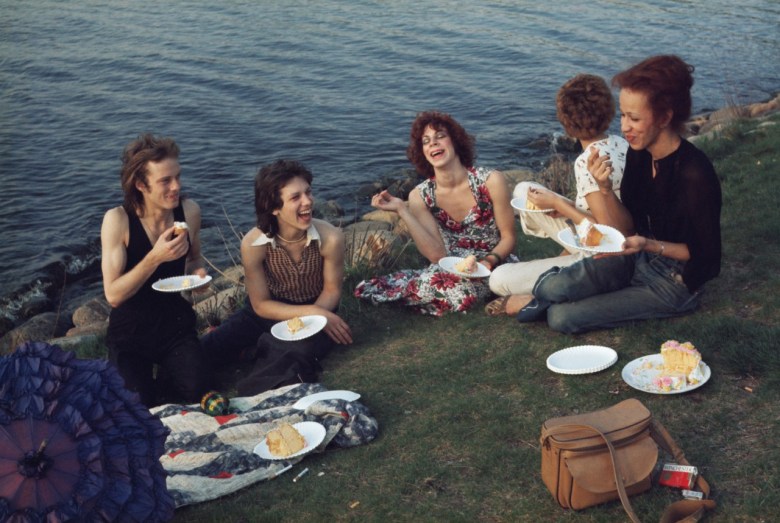 “All the Beauty and the Bloodshed”

“The strength of their collaboration really shows,” Powers said. “It deals with the withdrawal very powerfully.” (The movie is not the only nonfiction response to the military withdrawal of Afghanistan, as Matt Heineman’s “Retrograde” is expected to premiere elsewhere on the fall circuit.)

A third awards-friendly doc in the section has already been announced as the centerpiece of NYFF and may also surface in Telluride. “Citizenfour” Oscar winner Laura Poitras’ “All the Beauty and the Bloodshed” doubles as a portrait of photographer Nan Goldin and her activist efforts to take down the Sackler family, who own Purdue Pharma, the Oxycontin company blamed for the opioid crisis.

“It’s one of her strongest works,” Powers said of the Poitras film. “Even people who have closely followed the case of Purdue Pharma will gain insight into the force of Goldin’s activism.” Participant is distributing the film with additional partners that have yet to be named.

Finally, Powers said that Chilean documentary icon Patricio Guzman’s “My Imaginary Country” deserved a place in the awards conversation despite the modest resources of its distributor, Icarus Films. The film premiered earlier this year at Cannes.

“It may not have a stronger streamer behind it, but I think it’s his best film since ‘Nostalgia for the Light,’” Powers said, referencing the revered 2010 film about victims of the dictatorship buried in the desert. Guzman, best known for the 1976 revolutionary documentary “The Battle of Chile,” has now turned his attention to the street uprises that led to the election of Chile’s new leftwing president last year. “We see so many bleak portrayals of how power holds its influence over mass movements,” Powers said. “This is a really uplifting story of a mass movement having a real impact.”

Sales titles with the potential to generate heat out of this year’s festival include “The Grab,” from “Blackfish” director Gabriela Cowperthwaite, which WME is repping at TIFF. The film finds Cowperthwaite teaming up with a noted journalist as they explore the secretive efforts by a Chinese company to acquire American pork producer Smithfield, which ultimately led to its ownership of one in four pigs in America.

“It’s a question of who’s going to control the world’s resources for food and water — and who will be denied access in ways that don’t necessarily reflect geographic access,” Powers said. “Once you finish the film, you can’t unsee that.”

Other key sales titles include “Free Money” (CAA), a collaboration between Kenyan journalist Sam Soko and American filmmaker Lauraline that follows an experiment to give universal basic income to a village in Kenya, and “Maya and the Wave,” a portrait of Brazilian championship surfer Maya Gabeira.

“It operates not only as a thrilling documentary of athleticism, but it’s also an exploration of the dynamics of sexism that operate in so many sports but particularly surfing,” Powers said. The film should not be confused with the similarly-titled “Peter and the Whale” (Submarine), another promising sales title, which follows diver Patrick Dykstra as he gets up close with numerous whale species.

“If you ever wanted to swim with whales, this is the closest vicarious experience you’ll have,” Powers said. “It’s really quite beautiful.”

There are two episodic entries in the lineup, including three new episodes of the popular mockumentary series “Documentary Now!,” with one featuring Cate Blanchett, and another sales title that marks the only pandemic-related entry in this year’s festival. “Self-Portrait as a Coffee Pot” (Cinetic) is a nine-part essay film by South African artist William Kentridge (the festival will throw three episodes).

“There was a lot of speculation at the beginning of COVID about the art that would come out of it,” Powers said. “This documentary is really an outstanding example of someone who put lockdown to great use by making really a wonderful, playful exploration of creativity.” Williams uses lockdown to muse on subjects as far-reaching as apartheid and gold mining, while deploying special effects to engage in conversations with himself. The project boasts Walter Murch as a consulting editor and Joslyn Barnes as a producer.

752 Is Not A Number Babak Payami | Canada World Premiere

DOC CONVERSATIONS @ TIFF INDUSTRY CONFERENCE
On September 13, the Industry Conference will focus on conversations covering both the craft and business of documentary filmmaking. Access to the programming will be available to all press and industry pass holders. For public audiences interested in attending, limited day packages will be made available.

VISIONARIES: Inside the Brain of Werner Herzog
Presented by SHOWTIME
In his new film “Theatre of Thought,” Werner Herzog (celebrating his 80th birthday in September) explores the cutting edge of research on the brain. He’s joined by two figures who appear in the film, brain scientist Rafael Yuste and entrepreneur Jamie Davies, to discuss hopes and fears for the future of brain exploration.

VISIONARIES: What Laura Poitras Learned from Nan Goldin
Presented by SHOWTIME
Oscar-winning director Laura Poitras (Citizenfour) discusses what she learned over three years in the making of her new film “All the Beauty and the Bloodshed.” The film profiles the artist Nan Goldin, who has campaigned for museums to disassociate from the patronage of the Sackler family, owners of the opioid company Purdue Pharma.

DIALOGUES: Covering Afghanistan for “In Her Hands”
Presented by SHOWTIME
A Share Her Journey initiative generously supported by Betty-Ann Heggie
The new documentary “In Her Hands” focuses on Afghanistan’s youngest woman mayor, Zarifa Ghafari, during the tumultuous period of the Taliban’s return to power. Filmmakers Tamana Ayazi and Marcel Mettelsiefen share clips while reflecting on the challenges of filming under wartime conditions.

PERSPECTIVES Truth, Lies, and a Million Dollar Board Game
Presented by SHOWTIME
Filmmaker Vinay Shukla joins to discuss his new film While We Watched, which profiles the journalist Ravish Kumar of NDTV India as he struggles to maintain journalistic independence under death threats. For Shukla’s previous documentary “An Insignificant Man,” his team created a board game that gained massive support on Kickstarter. He’ll discuss plans to follow that model by pairing a board game with his new film.

PERSPECTIVES DocuMentality: The Growth of a Movement
Presented by SHOWTIME
DocuMentality is an expanding initiative that seeks to normalize conversations about mental health in the documentary industry and provide best-practice guidance for filmmakers. The project started with efforts in the UK and US. Now, the Documentary Organization of Canada (DOC) is spearheading a new wave of focus groups with support from the Canada Media Fund. On this panel, audiences will hear from DocuMentality team member Malikkah Rollins and DOC’s Sarah Spring about the past, present, and future of the movement. We’ll also hear from filmmaker Rebeca Huntt describing what she learned about maintaining mental balance in the making of her intensely personal film “Beba” that premiered at TIFF last year. Moderator: Inney Prakash (Maysles Documentary Center).

Cyclists, welcome, you have just become the latest target in the culture wars