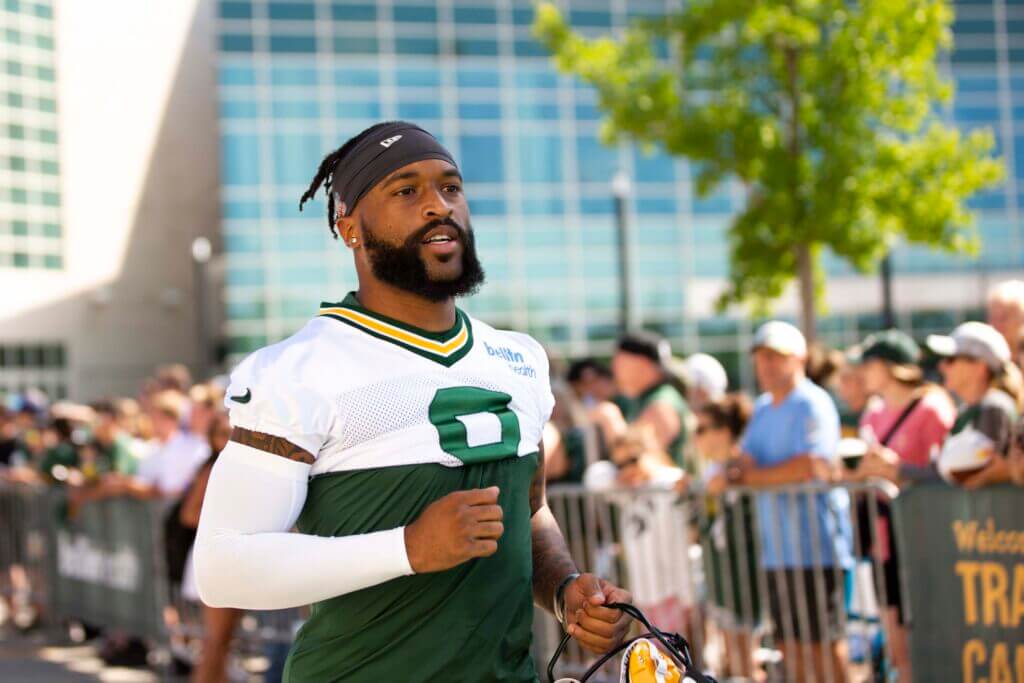 Amari Rodgers hovered between 215 and 218 pounds during his rookie season. He felt too heavy, too slow and out of shape. Exhausted after only a couple plays in 2021, Rodgers now admits his conditioning last offseason was inadequate. He paid the price.

Rodgers, the Packers’ 2021 third-round pick out of Clemson and Trevor Lawrence’s go-to offensive weapon, played just 103 offensive snaps as a rookie (9.23 percent of Green Bay’s offensive snaps). He attributes his lack of playing time largely to his lack of fitness. They weren’t a particularly productive 103 snaps either, with Rodgers fumbling twice while catching only four passes for 45 yards, rushing once for 11 yards and dropping one pass. He was indecisive and ineffective as a returner, too.

“It was very disappointing to me because of the standard I hold myself to,” Rodgers said this week.

The 22-year-old entered his sophomore training camp weighing 202 pounds, down 16 pounds from last season’s peak. He said all the weight came off his torso. He weighs even less than he did at Clemson (around 210 pounds), which is the last time he felt comfortable physically on the field.

Rodgers isn’t the only one inside Lambeau Field who has noticed the difference.

“You see a difference in him from last year to this year,” said Randall Cobb, who has been a mentor for Rodgers for more than a decade. “From his weight, his speed off the ball, the way he’s moving around.”

Added Packers GM Brian Gutekunst: “He did a great job this offseason getting into a different kind of shape.”

At the beginning of training this Off Season I weighed 218.. Today I’m at 202 and feeling better than ever. Trust the process and results will come💯

That transformation began the week after the Super Bowl in February, when Rodgers started a six-month stint training in Atlanta with Dwight Phillips, the 2004 Olympic gold medalist in the long jump and four-time world champion in the event.

Phillips trained Rodgers four days a week, with each day focused on a different type of running: power, speed, hybrid (power and speed) and endurance. The first day they worked together in February, Phillips had Rodgers do resistance runs, 60 meters with 700 pounds of weight pulling him back.

“The very first day was a disaster,” Phillips said in a phone conversation this week.

Phillips called Rodgers’ conditioning when they started “horrible.” After four reps of those resistance runs, Rodgers was exhausted. He told Phillips it was the hardest thing he had ever done. Gradually, Rodgers started feeling more capable physically as he stacked track workouts, sat in the sauna for 20-30 minutes afterward to sweat out the toxins and ate less. Phillips worked with him to minimize sugar intake, avoid eating soon before bed and drink at least a gallon of water every day.

Rodgers showed up to workouts with a gallon jug. He tracked how much water he drank every hour. When he got hungry, he’d chug water instead of eating.

By May, Phillips noticed a drastic change in Rodgers’ physique, endurance and power. He worked with a chiropractor and massage therapist, too, to make sure his body didn’t deteriorate like it did his first year in the NFL.

By late July, the end of Rodgers’ six months in Atlanta, he completed those resistance runs with ease.

“By the end of it, I felt like I could run a track meet,” Rodgers said. “(Phillips) put a great plan together for me. I’m so thankful for him. Without him, I probably wouldn’t be in the shape I am now.”

• Another strong day for Romeo Doubs

Now that Rodgers is equipped with the proper physique and fitness, next comes actually playing well. Doing so requires actually thinking he can.

When Rodgers was thrust into a primetime game in Arizona last season against the then-undefeated Cardinals while Green Bay’s top three receivers were sidelined, he looked like a deer in headlights. Wide receivers coach Jason Vrable said this offseason that unlocking Rodgers’ next gear will require getting him to believe in himself like he did at Clemson. How he felt about his game that night in Arizona compared to how he feels now is like night and day, Rodgers said.

“I feel like that game was like a freshman being thrown into a top-five matchup in college football,” Rodgers said. “I really wasn’t ready. I can say that now. I wasn’t ready. Now I know I’ve prepared and I’ve put the work in this offseason and I’m ready for any situation now for sure.”

Several people in the building have stressed the need for Rodgers to get more opportunities in order for him to thrive. Those are there for the taking in the return game, where Rodgers knows he must become a more north-to-south runner instead of moving horizontally after he catches punts in order to retain the job he held for the majority of last season. They’re also there for the taking at wide receiver with no Davante Adams or Marquez Valdes-Scantling and an aging Cobb in the slot.

Sammy Watkins, Christian Watson and Romeo Doubs are unproven wide receivers here in Green Bay, too. Rodgers might get the chances that came so few and far between a year ago, if only because he feels more like his complete self than a fraction of it.

“I think he’s a very resilient person, the person that I know,” Cobb said. “Whoever said that his year was whatever it was, he had growing pains and we all go through it.”

And no, the Packers aren’t cutting him. The leash won’t be that short for a third-round pick from a year ago. Gutekunst said he feels the middle of Year 2 is when players start to grasp the offense and let their talents show.

That time hasn’t come yet for Rodgers, and he hopes to make the most of it when it does.

“Amari’s in much better shape, and again, it’s going to be how fast he can continue to improve on a daily basis,” head coach Matt LaFleur said. “He’s done some nice things … There’s still a long time in front of us, but I am excited about what he can potentially become.”