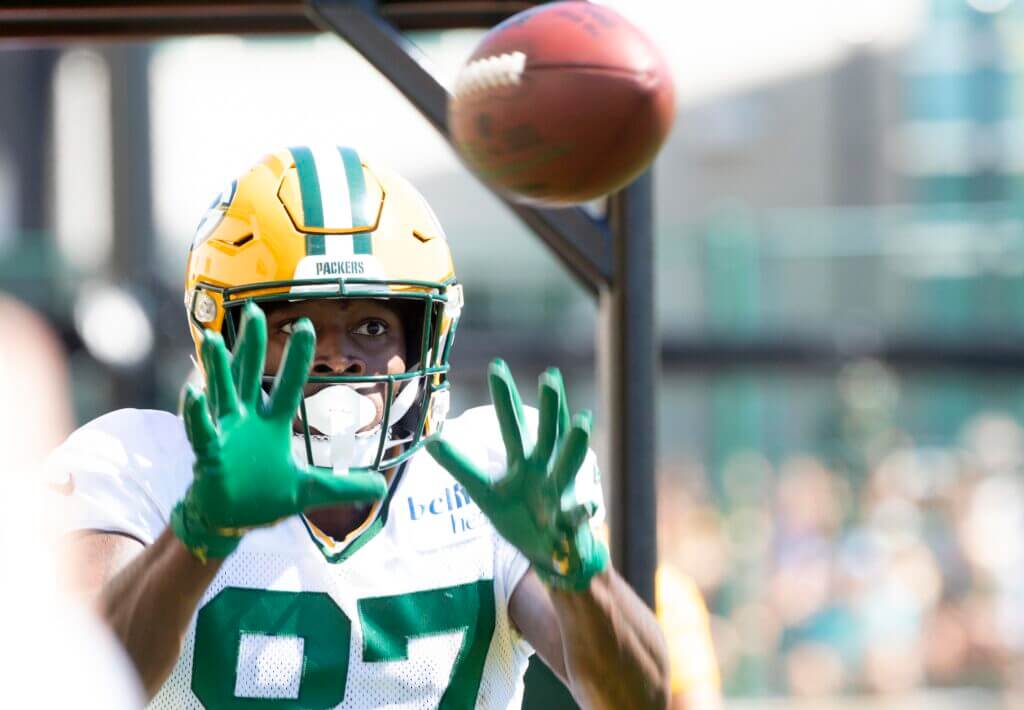 With a Family Night practice held in front of more than 50,000 people in the rearview, the Packers enter their first game week of the year as they prepare to visit the 49ers for their preseason opener on Friday night.

To bide your time while the team is off Saturday, here are my five biggest takeaways from the first 10 days of Packers training camp.

Since quarterback Aaron Rodgers declared after the first practice of camp that he told those “chumps” on defense that it was 1-0, offense, a Packers defense that’s vaunted on paper has lived up to that billing on the field. That starts with a defensive line that has been in Rodgers’ face often.

“I think the one area that we have to improve is just the consistency up front,” head coach Matt LaFleur said of his offense after a sluggish Family Night showing. “And now granted, I think we have a pretty good defensive front. Our front seven can be pretty salty, so I hope they’re making our offense that much better, and obviously it’s always tough when you’re missing two major players up front. But at the end of the day, it really doesn’t matter who’s out there.

“They got to get the job done, and we’ve got to see improvement over the course of the next week and into the preseason games.”

There shouldn’t be major concern about Green Bay’s offensive line in the long run if David Bakhtiari and Elgton Jenkins return to form. But that’s a big “if,” and the Packers have been forced to live with starting combinations featuring Jon Runyan Jr. at left guard, Josh Myers at center and a mix of Yosh Nijman, Zach Tom, Royce Newman and Jake Hanson filling the other three spots.

It remains unclear if Bakhtiari will be ready for Week 1 in Minnesota, and Jenkins will likely start the season on the physically unable to perform list, requiring him to miss at least the first four games of the season. Though Green Bay made due without Bakhtiari and Jenkins for much last season, the team hopes the preseason will be the extent of their absences in 2022.

LaFleur tempered expectations for fourth-round rookie receiver Romeo Doubs after a strong first day of camp by adding the caveat that it was only one day. Well, it’s been pretty much every day since then, too. It’s still far too early to draw any reliable conclusion about what Doubs will be, but his first impression has been nothing short of spectacular.

Doubs makes a highlight-reel catch seemingly every day. The latest came Friday, during one-on-ones, when he hauled in an underthrown deep ball down the right sideline from quarterback Jordan Love for a touchdown.

Another “wow” play from Romeo Doubs during 1-on-1s against CB Kiondre Thomas pic.twitter.com/Q4IF614ON3

On a fluid wide receiver depth chart, Doubs has stated a convincing case for immediate playing time in games that count.

“It’s never been too big for him,” Rodgers said of the rookie on Wednesday. “I really like the approach. He’s a very humble kid, but you’re starting to see the personality come out a little bit, which is fun to see. He’s had a lot of opportunities, which has been great. … He’s made the most of it. It’s not just the team stuff. I thought he ran some good routes yesterday in the one-on-ones against Stokes, and it’s just a matter of the mental stuff. He’s still making some mental mistakes, but you expect those.

“It’s the approach, though, and his release patterns. (He catches) the ball with his hands. Every single day — you guys know, you’ve been watching — there’s been at least one kind of ‘wow’ play for him, and that’s kind of rare for a young guy like that. Now we’ve had some guys over the years kind of do that, but they’re all in the top 10, I think, in the Packers’ receiving history.”

If Doubs is the player of camp 10 days in, Rashan Gary isn’t far behind. He might even be ahead. The fourth-year edge rusher has been a menace off the edge, picking up where he left off at the end of last season, when he had two sacks and four pressures in Green Bay’s playoff loss against the 49ers.

“He’s pretty disruptive,” LaFleur said of Gary. “He’s relentless, too, and that’s what I love about him, the effort he shows on each and every play. I mean, every day we go in there and basically create a teach cut-up of ‘this is how it looks.’”

Rashan Gary called Za’Darius Smith while he was at the movies on a camp off day in 2019 because he had questions about Smith’s tape.

Armed with a fresh contract extension, Preston Smith is a worthy No. 2, but after the top two is where the certainty ends on the edge. LaFleur said that while Nos. 1 and 2 on the outside linebacker depth chart are set, spots Nos. 3-5 are up for grabs. Both Gary and Smith stayed largely healthy last season but played less than 64 percent of the Packers’ defensive snaps, so depth at the position will be relied upon more than at cornerback, safety and inside linebacker.

Entering Family Night, Jonathan Garvin and Randy Ramsey were the Nos. 3 and 4 edge rushers, but Ramsey missed Friday’s practice with an ankle injury. It’s unclear whether the issue is with the same ankle that kept him out all of last season. Tipa Galeai and rookie Kingsley Enagbare are the next two in line.

The next three weeks will reveal just how much concern there should be on the edge when Gary and Smith aren’t on the field in the regular season. If Ramsey’s injury is significant, there’s little evidence to show Garvin and Galeai can maintain anywhere near the standard set by the pair above them in the pecking order.

Aside from the couple times Doubs has beaten Stokes, the highly touted cornerback trio of Jaire Alexander, Rasul Douglas and Stokes has looked the part through 10 days of camp.

Douglas looks to be the leading contender to get the first crack in the slot, which makes sense because of his ball skills and size. Douglas said this week this is the most he’s ever played nickel, but he feels it’s a position that suits him well because it’s a spot catered for playmakers. He did his fair share of playmaking last season with 13 passes defensed, five interceptions and two picks returned for touchdowns in 12 games.

Alexander has been his steady self, making tricky pass breakups look like walks in the park. A reminder entering the season, and one relevant to this camp: Not seeing Alexander’s name flood Twitter probably just means quarterbacks aren’t throwing at him, which is a good thing for him.

Stokes has looked the shakiest of the three, but it might seem to fans that he’s been worse than he actually has, if only because his shortcomings are magnified when they come against the trendy rookie Doubs.

Here’s a look at some of the good Stokes has done that may not be as tweet-worthy as when he’s slamming the ground in frustration after losing a one-on-one rep against Doubs.

Said LaFleur of the trio: “All three of those guys are, in my mind, elite players.”

The most notable injuries are to Bakhtiari and Jenkins because of what they mean to the Packers, but a handful of other players who are currently rehabbing ailments are worth keeping an eye on as the season nears, too.

Tight end Robert Tonyan tops that list, given how reliable he was in 2020 and how thin the Packers are in the department of proven pass-catching tight ends behind him. Josiah Deguara has been one of my quiet standouts of camp, though, especially for how well he’s done against safety Darnell Savage Jr. in one-on-ones.

Running back Kylin Hill is still rehabbing the torn ACL he suffered in Week 8 last season, leaving the competition for the third running back job to Patrick Taylor, Tyler Goodson and B.J. Baylor for now (Taylor has been sidelined the last three practices with a groin injury). Goodson was one of the Big Ten’s most prolific pass-catching running backs for Iowa, which we know appeals to LaFleur.

Slot cornerback and former Raiders core special-teamer Keisean Nixon has been on the non-football injury list with a groin injury for all of camp, and getting him back is paramount to both depth in the secondary and expertise on Rich Bisaccia’s special teams units. Nixon has still been coaching players during special teams drills while injured, a benefit of his familiarity playing for the Packers’ first-year special teams coordinator.

Veteran kicker Mason Crosby has not yet suited up for practice because of a knee injury, and undrafted rookie Gabe Brkic has been inconsistent in his place. Crosby said on the first day of camp that he doesn’t expect to be sidelined for long and is aiming to be ready Week 1. General manager Brian Gutekunst implied that the kicking job will be Crosby’s as soon as he’s healthy.

The new injuries to Ramsey and Savage (hamstring) will also be worth watching when practice resumes on Sunday, though LaFleur and Savage both indicated the safety’s ailment isn’t cause for concern.