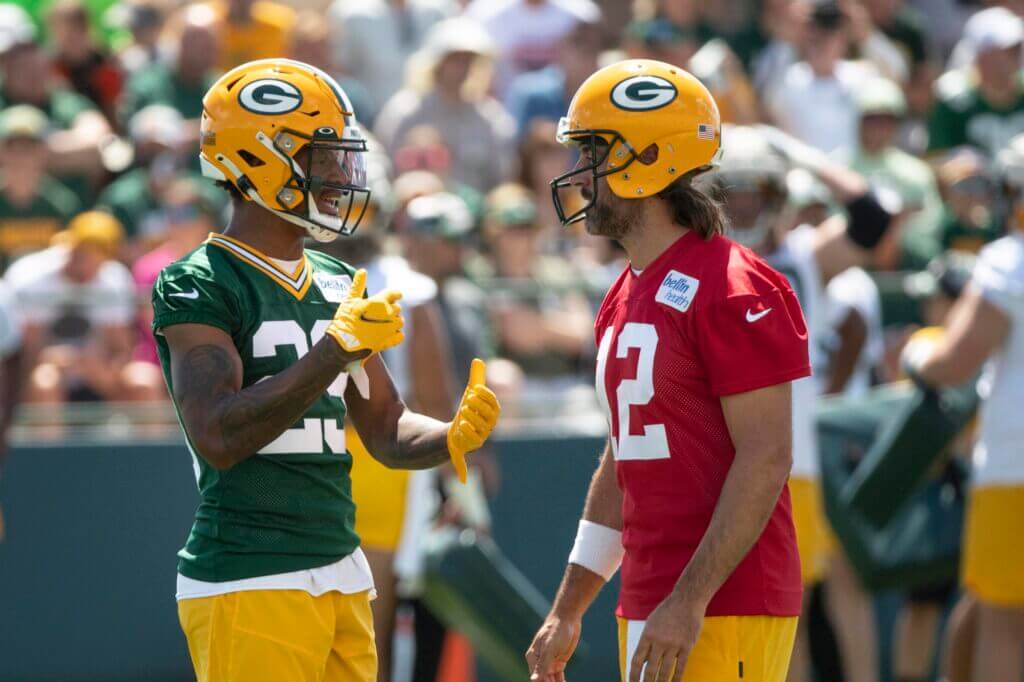 Aaron Rodgers doesn’t recklessly heap praise on teammates. Everything he says is calculated. So when he compared one of his current teammates to one of the best players of all time, it was noteworthy.

Rodgers has been seen in between practice periods this training camp chatting with cornerback Rasul Douglas one on one. The quarterback was asked this week about those conversations.

“Rasul is one of the smartest guys I’ve ever played with,” Rodgers said. “He reminds me a lot, in the deepest respect, of Charles Woodson. He has incredible ball skills. He baits you at practice. He has the competitive fire that Charles did. That may have looked like me talking to him, but it was as much him talking to me.”

What did it mean for Douglas to hear Rodgers compare him to the Hall of Famer?

“A lot,” he said. “A lot, man. I appreciate that comment, honestly. That’s big, to even be compared or mentioned in the same sentence with one of the best.”

Woodson is tied for second in NFL history with 11 interceptions returned for touchdowns. Douglas made waves doing the same in 2021, and though his resume is far from Woodson’s, showing flashes of one of the two best players Rodgers has said he has ever played with (Davante Adams is the other) has made the Packers and their starting quarterback that much more thankful they found him on the Cardinals’ practice squad early last season.

Douglas’ meteoric rise since the Packers signed him has been nothing short of remarkable. Added for cornerback depth after Jaire Alexander’s significant shoulder injury in Week 4, Douglas sat behind Isaac Yiadom on the depth chart to start his tenure in Green Bay. That arrangement didn’t last long, as the 26-year-old cornerback became an interception machine. He picked off five passes in 12 games and returned two for touchdowns, with two others sealing wins against the Cardinals and Browns. He also finished the season with a whopping 13 passes defensed in that limited action.

He made sure his McDonald’s dollar menu orders in community college lasted multiple meals since he had no meal plan.

“I watched the kid go from nothing to where he is now,” his high school coach said.

His breakout season earned him a new three-year, $21 million deal. An NFL afterthought at this time last year, Douglas is now a cornerstone for what could be one of the NFL’s best defenses.

“It’s pretty rare to have a guy that has the knowledge,” head coach Matt LaFleur said. “And I think that’s why he’s been able to make a lot of plays. He’s so good at recognizing formations and splits and understanding what routes come from each split. He’s been able to jump a lot of balls. He’s got great ball skills and he’s just a great competitor.”

The studying in part helped Douglas go from an NFL afterthought to star and one-third of arguably the NFL’s best cornerback trio, a player and group taking advantage of being teammates with perhaps the best quarterback in the NFL and vice versa.

“I love picking his brain because of his ability to see the game and concepts,” Rodgers said. “And I think it’s important that we share both sides — me sharing with the defense, their disguise and their eye discipline and certain things that can help them, and their feedback. Like I told (the receivers) the other day, ‘You’ve got to let me know because we’re trying to win here (and) it’s not about a competitive advantage in practice.’ What can I tell these young guys on the little things to improve the route running, their eye discipline and just little things in the details.”

Added Douglas: “And we always ask him: What does he see when we run our coverages? Sometimes I ask him on the side or even right after the drive is completed, I’ll ask him what I could have done better or what I should have done or anything like that. When he’s reading me, I like to know what he sees from his side of it just to help myself get better.”

I counted 28 reps of one-on-ones between wide receivers/tight ends and cornerbacks/safeties at practice on Thursday. Here are the results of each:

Spoke with Phillips about their regimen and how Rodgers went from 218 pounds to 202.

On Rodgers’ transformation, why he did it and his opportunity ahead: https://t.co/V1twei24Pz

The Packers did offensive line vs. defensive line one-on-ones on the other field at the same time, and unfortunately I still haven’t cloned myself. Thus, here are the results of those again from my podcast partner, Sports Illustrated’s Bill Huber.

• Rodgers hit running back Aaron Jones twice, once for 25 yards down the middle — though Amos might’ve blown up the play in a game — and also hit Watkins on a slant on fourth-and-5 for a first down during the two-minute drill en route to the 14-yard line (they started at the opposite 25 with 1:40 on the clock and trailing by seven).

• On second-and-10 from the 14 with 12 seconds left on the clock, Rodgers lofted a ball toward Deguara in a crowd in the front middle of the end zone. After dropping an interception in a similar spot two days ago, Amos held on this time to win the drill for the starting defense.

• During the backup offense vs. backup defense portion of the two-minute drill, a Hamilton forced fumble and Galeai touchdown return won the drill for the defense three plays in.

• Love and company get another shot, but Thomas’ pass breakup forces a turnover on downs.

• Randy Ramsey has taken over Galeai’s outside linebacker spot with the 2s, at least for now. He joins Garvin on the second unit, while Enagbare and Galeai are OLBs 5 and 6.

• Tom again worked with the starters at right tackle, his second consecutive full-speed practice doing so.

• Packers legend Jordy Nelson attended practice with his wife and kids. Cobb tried to get him in a drill for five minutes, and Nelson joked he’d do it if Cobb needed a break. Rodgers said to Nelson, “Look at this fat guy over here,” when he first chatted with him. LaFleur, who never coached Nelson, asked him to break down the huddle post-practice, but Nelson refused from the sideline with a smile and LaFleur yelled, “You scared?”