On New Year’s Eve 2020, two days after acquiring Blake Snell and Yu Darvish in rapid succession, the Padres signed Korean star Ha-Seong Kim to a four-year, $28 million contract. It felt like an exclamation point on a wild and successful year. At the time, team officials thought they had landed a versatile defender and, more importantly, an offensive player capable of producing 20-20 seasons in San Diego.

At least one analytical website agreed with those projections. Across seven seasons in the Korea Baseball Organization, Kim demonstrated consistent speed, improving plate discipline and significant pull-side power. In his final season with the Kiwoom Heroes, he hit .306 with a .397 on-base percentage, a career-high 30 home runs and 23 stolen bases. The shortstop also won his third consecutive Golden Glove Award, an honor that, despite its name, does not necessarily go to the best defender. Instead, it is bestowed on the player deemed the best overall at his position. And in each of his Golden Glove campaigns, few KBO hitters performed better than Kim.

With San Diego, his production has flipped. Kim has been a league-average hitter this season after hitting far below average in his 2021 debut. But just as he was a season ago, he is among the majors’ more valuable defenders. His stateside progress has unfolded somewhat unexpectedly but also conveniently: In the biggest story of the year, Fernando Tatis Jr. has been suspended for the rest of 2022 and part of 2023. Top prospect CJ Abrams has been traded for Juan Soto. So, Kim will continue as the Padres’ primary shortstop for a while longer.

His own story is a welcome development. After going 2-for-3 with a walk in Tuesday’s loss to Miami, Kim has been worth 2.6 wins above replacement, according to FanGraphs. Baseball-Reference puts him at 3.2 WAR, second among season-long Padres behind only Manny Machado. Both sites have come to the same conclusion: Kim remains limited against major-league pitching, but he has compensated by making himself into an uncommon fielder.

“You look at any defensive metrics, and it says the same thing,” manager Bob Melvin said. “Sometimes you look at different ones, and some things don’t match up. For him, it’s quality all the time.”

Kim is tied for 15th in the majors in Defensive Runs Saved (DRS). He is tied for 21st in outs above average (OAA). He is sixth in Ultimate Zone Rating. The names ahead of him on the UZR leaderboard: Myles Straw, Mookie Betts, Nolan Arenado, Andrew Benintendi and José Ramírez, not a shortstop among them. Kim occasionally spells third baseman Machado, a perennial Gold Glove Award candidate, but he has not been needed this season at second base, where he is also a slick fielder.

Wherever he plays, Kim displays a combination of sound fundamentals, sure hands, an accurate arm and maximum effort. Last season, he credited then-Padres bench coach Bobby Dickerson for taking his defense to unprecedented heights. This season, the work has continued with another experienced instructor in third-base coach Matt Williams. And Kim has cited Machado and second baseman Jake Cronenworth, a pair of All-Stars, for elevating his performance.

“Just being around them every day made me play harder even more, just to be with them, to play at the same level as them,” Kim said. “It kind of motivates me every day.”

Meanwhile, he does not pay attention to the defensive metrics that value him so highly.

“I don’t look at those numbers,” Kim said. “In Korea, I used to check (his offensive statistics) a lot because I had pretty good numbers over there. But here, I try not to because it’s stressing me more maybe. So, I’m just trying to play the game, not think about those numbers too much.”

Kim might be stressing less than he was a year ago. In 2021, his offense was roughly 30 percent worse than league average. He struggled to adjust to major-league velocity. He grappled with inconsistent playing time, a new culture, a new language and, unlike in Korea, travel across multiple time zones. In 2022, the amiable 26-year-old continues to be one of the Padres’ popular teammates, even as he has turned around more fastballs and earned near-daily starts.

Through almost three-quarters of this season, Kim has an .824 OPS against left-handers, up from a .672 mark last year. He is hitting .289 with runners in scoring position. Since the beginning of July, he has hit .298 overall with a .343 on-base percentage and a .435 slugging percentage. 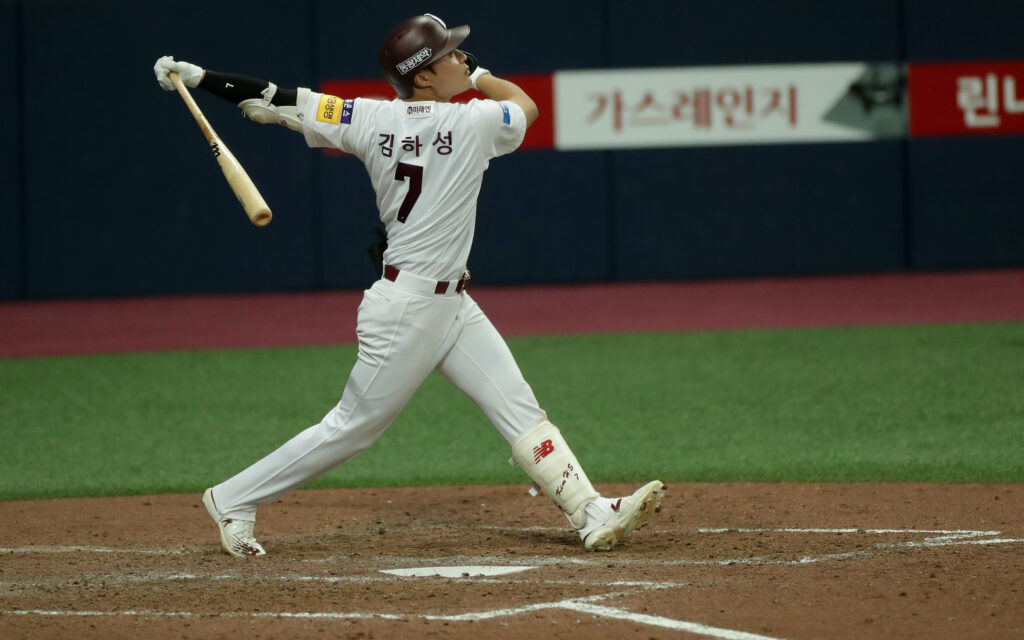 After starring in Korea, Ha-Seong Kim believes he still has a “long ways to go” as a major-league hitter. (Han Myung-Gu / Getty Images)

“I feel I still have a long ways to go on the offensive side, but the experience, all the at-bats last year, definitely have helped me get used to the pitchers more, helped me feel more comfortable in my at-bats this year,” Kim said. “In the offseason, I worked on the timing, the mechanics a little bit more, adjusting to big-league pitchers. I think that’s helped me as well. But yeah, the experience played a big part, a big part.”

“He’s really a good player,” Melvin said recently. “For a while there, it was getting him in against lefties and let his defense work. But he’s put himself in a position now where he’s basically an everyday player. Now, the workload at times, you have to give him a little time off. But I think when he came over to the States, he was hoping that he was a guy that did get to play a lot and didn’t last year, and I think it’s a different year for him, and the fact that he’s more comfortable here now. And the more you see him play, the more you realize why the team went out and signed him to this type of contract.”

On Thursday in San Diego, Tatis is expected to meet with owner Peter Seidler, president of baseball operations A.J. Preller and the rest of the clubhouse. How the star shortstop explains himself, and how he presents himself, could largely determine his trajectory with the franchise. His teammates are eagerly anticipating his version of events, spoken out loud, even as they have insisted they can win without him.

After all, the Padres remain in playoff contention despite his season-long absence. They have added Soto to their lineup. And Kim, who would have lost playing time with Tatis’ return, has played no small part in their relative success. He might never approach a 20-20 major-league season — he has six home runs and eight stolen bases — but the evaluations, so far, have not been entirely wrong. Through consistent effort, he is supplying impressive defense, a near-daily quality that does not slump.

In May, Machado called Kim the “heartbeat” of the team.

“That’s Kim,” Machado said. “He gets along with everybody, he loves everybody and he brings that energy every single day. Whenever he steps on that field, he’s playing that good defense, he’s handled the at-bats this year. He’s proving it.”

Three months later, Kim is still proving it. The Padres, amid another turbulent summer, need him more than ever.