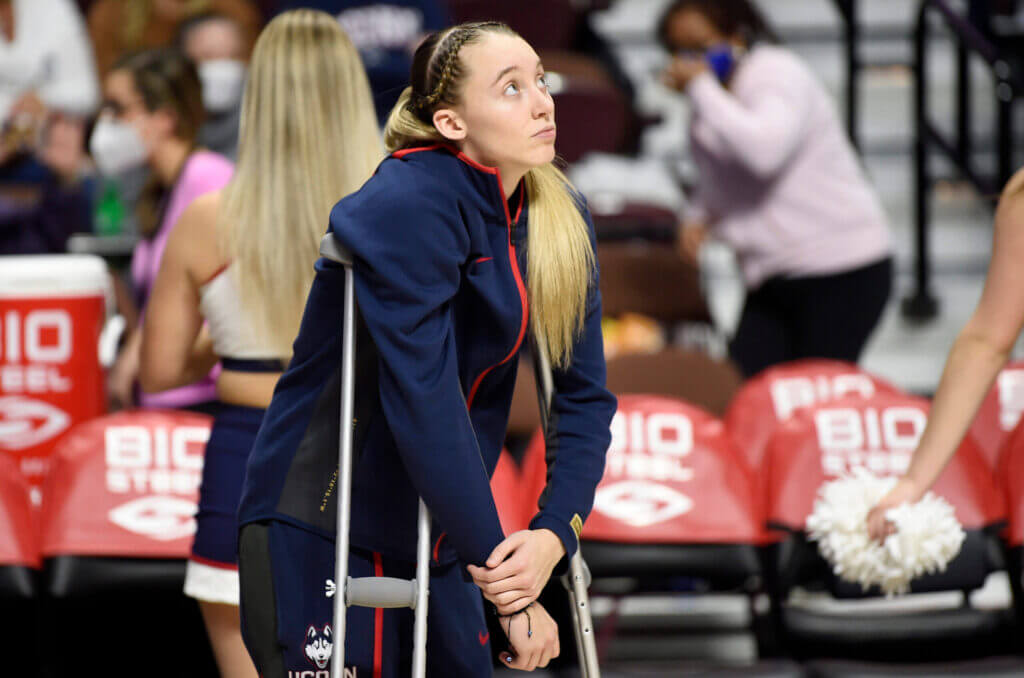 Paige Bueckers is not one to hide her emotions. On the court, it’s impossible to miss whether she’s pleased or furious, feeling loose or fired up.

So last season, when she was on UConn’s bench for 19 games, it wasn’t a surprise that Bueckers — who had never before missed significant time in her basketball career — was uncomfortable and did not do a great job of hiding it. Her face told the story before she needed to say so herself. Sidelined with a tibial plateau fracture stemming from a non-contact injury during the season, the benched Bueckers did her best impression of “athlete looking to find the silver lining while watching from the sideline” as the Huskies struggled without her. Thankfully for UConn, she’s a better basketball player than actor.

Hers was a devastating loss for the Huskies, and the sport, which was eager last season to prop up Bueckers, a player who had won almost every national player of the year award the previous season as a freshman, a feat never accomplished by a player so young. She managed to return to the court in time to lead UConn to the national title game, where it fell short to South Carolina. The Gamecocks dominated that game but it felt — quite simply — like a prelude to this season when the two powerhouses would find themselves on a collision course to meet again.

But on Wednesday, during downtime in the sport, a period in the calendar when hearing nothing from a program or a player means that everything is going as expected, UConn announced that Bueckers had torn her left ACL on Monday during a pick-up game. The injury will require surgery on Friday, and though UConn announced she will miss the entire 2022-23 season, an updated timeline for her recovery will be released sometime after her procedure.

And it’s not hard to imagine how she’s feeling, because she took to Instagram to tell everyone herself. She wrote: “It’s so so crazy because you work so hard to get back healthy, you feel stronger than ever, and you are playing your best basketball and with one sudden movement it all shifts.” She called it “a nightmare.”

Earned or not, fair or not, Bueckers is the most famous women’s college basketball player in the country. Her spot as such has earned her national headlines, magazine covers and a million Instagram followers in addition to NIL deals valued somewhere north of $1 million a year. Even the casual fans or those who don’t watch women’s basketball (heck, even the people who gladly shout/tweet “No one watches women’s basketball”) know Bueckers. They associate her with UConn. They’re aware she’s the kind of player who has created magic in games.

And her injury is one that impacts the sport at large. She moves the needle for women’s basketball despite the fact that she has only played in 42 games for the Huskies.

Perhaps most bitter in this is how Bueckers’ offseason focus was on gaining strength to help her withstand the blows of a season so she could remain injury-free coming off her knee issues last season.

“We’re all devastated for Paige,” coach Geno Auriemma said in a statement. “She’s worked really hard to get stronger and healthier this offseason, and this is an unfortunate setback.”

Bueckers chose to spend this offseason in Storrs, Conn., specifically so she could have access to the weight room. She had put on (and kept on) 10 pounds of good weight and re-tooled her diet to make sure she was full throughout the entire day. Chips had been replaced by protein smoothies, eating out had been supplanted by cooking in her apartment. UConn’s strength and conditioning coach Andrea Hudy had praised Bueckers’ commitment in the gym. “She’s gotten stronger,” she said. “And I think she feels more confident, she looks more confident. She says she feels better on the court.”

They were the kinds of storylines you expected to see repeated thoroughly as Bueckers went on a tear through the 2022-23 postseason, tracing back the successes of her NCAA Tournament performances to the roots of it all that were made by tiny offseason decisions. The kinds of storylines that would play ahead of the UConn-South Carolina rematch in Dallas at the end of the NCAA Tournament.

Now, UConn will play the 2022-23 season without its biggest star on the floor.

But it’s UConn, so the cupboard is not empty. Azzi Fudd, the No. 1 player in the 2021 class whose freshman season was hampered by a foot injury, will step more firmly into the limelight. Nika Mühl, the fiery guard who also missed time last season with a foot injury, will likely take over primary ballhandling responsibilities. Caroline Ducharme, who got more run last season because of Bueckers’ knee injury, will look to build on her own freshman year. Dorka Juhász, who fractured and dislocated her wrist last March and has opted into her COVID-19 bonus season, hopes to make the most of her final year of college hoops.

This team will look different, and its potential will be different so long as Bueckers remains on the bench — a place that she, the sport and fans of it so deeply wish she were not.

There is a possibility that we’ve seen the last of Bueckers in a UConn uniform, that her departing image from the college level is of her walking off the court in Minneapolis last April as South Carolina celebrated at midcourt. The junior turns 22 in 2023, making her eligible for the WNBA Draft, which will be held in April. Not many women’s basketball players have opted into the WNBA after just 42 college basketball games, but Bueckers is not like many women’s college basketball players.

There is also the possibility that we’ve only seen the beginning of her in a UConn uniform. With a potential medical redshirt this season and a COVID-19 bonus year from the 2020-21 season, Bueckers could still play three more years of college hoops if she so decides. She could enter the draft at 25. She could, if she’s so inclined, spend up to six years in Storrs.

But those will be decisions for a later date. For now, Bueckers will spend the rest of this offseason focused on daily, quiet progress. But it won’t look like what she thought it would look like even a week ago. Instead of a direct path to a shot at a national title, her journey will now wind from a focus on walking, then running, then playing basketball … and then, maybe, winning a national championship.

It’s not hard to imagine in this moment how frustrated and devastated Bueckers might be, but this is also a time when it’s not difficult to imagine her fire. As she wrote on Instagram, “It’s going to be one hell of a comeback.”

Editor’s note: Follow the NCAAW league or your favorite team to get more stories like this direct to your feed.