SPARTANBURG, S.C. — When the Carolina Panthers lined up for team drills on Wednesday during their seventh practice of training camp, Sam Darnold was behind center as Matt Rhule continues to alternate Darnold and Baker Mayfield with the first-team offense.

Also in that first group was Brady Christensen at left tackle, as he has been for the first two weeks of camp. Ikem Ekwonu, the pancake king of Raleigh who was drafted No. 6 overall to be the Panthers’ left tackle of the future, again worked with the second team.

If there’s been a constant in Rhule’s second real training camp (the Panthers didn’t come to Wofford in 2020 because of COVID-19), it’s that no one is going to be handed a starting job.

Not Mayfield. Not center Bradley Bozeman. And not the aforementioned “Ickey,” the former NC State standout who was the first offensive player taken on Day 1 of the draft.

“To me, Ickey’s a rookie. He’s gotta earn everything he gets, and he’s got a long way to go,” Rhule said. “He does some things really well naturally. He’s unbelievably powerful and talented. But there’s a lot to this game. There’s a lot of nuances and techniques and all those things. He has a long way to go. He’ll get there, but every day he’s gotta work.”

Maybe it’s owing to his background as a college coach, but Rhule is not about anointing many players as starters before they’ve stepped on Wofford’s campus. There are exceptions. Former Los Angeles Rams offensive lineman Austin Corbett jumped into a starting job at right guard, while veteran safety Xavier Woods slid into the first-team defense alongside Jeremy Chinn from Day 1 in Spartanburg.

“I don’t think it’s fair to make decisions about the depth chart unless it’s blatantly obvious,” Rhule said. “But guys who are battling after a week, you’ve gotta (get) these guys to settle in.”

Rhule has made it clear that he’s in no hurry to name a starting quarterback, nor has he given any indication when he plans to do so. As I’ve written previously, my expectation is that it will be Mayfield — and nothing from the first seven practices has changed my mind. 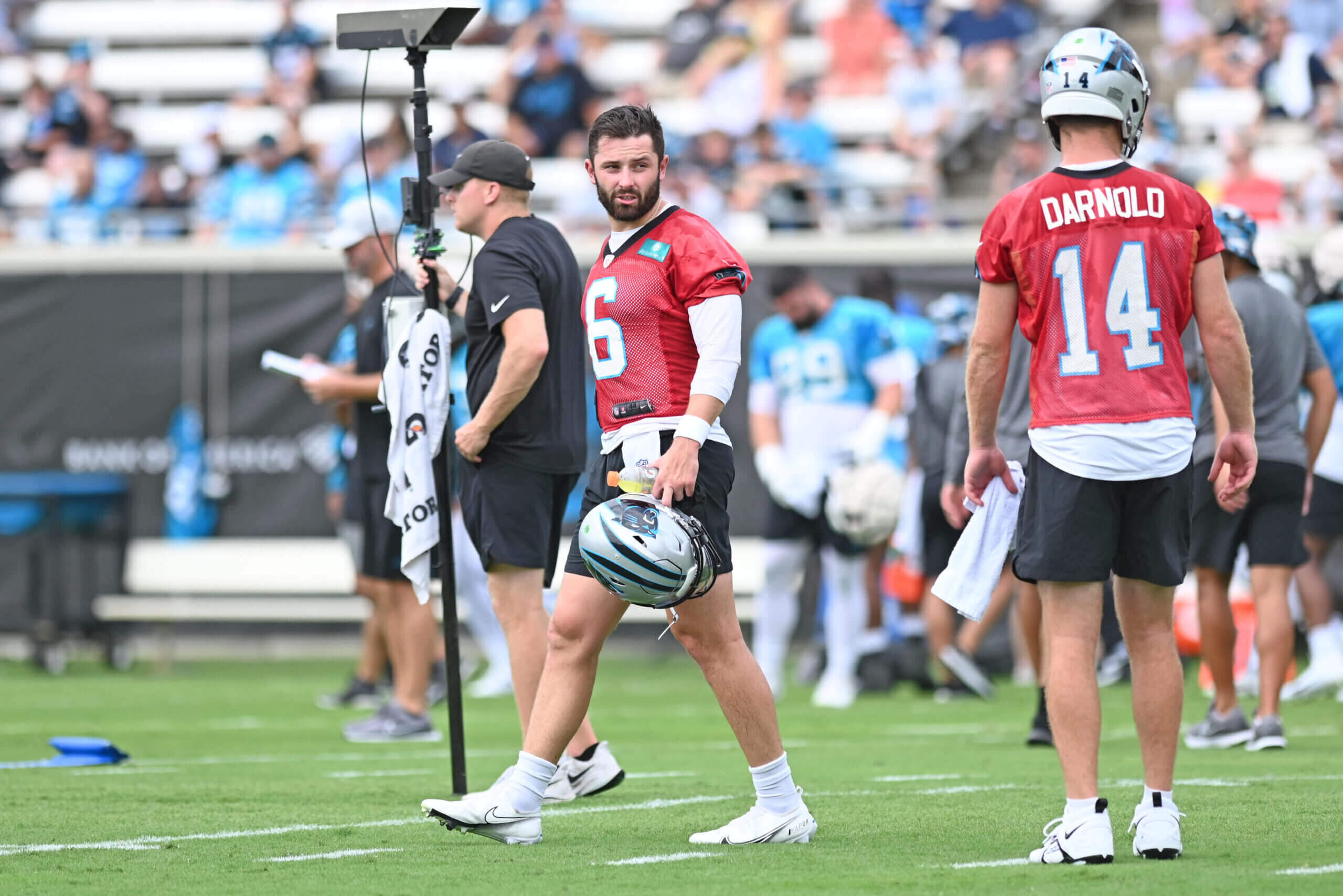 Not that Mayfield has been head and shoulders better than Darnold. Mayfield was doing more thinking than reacting the first week of camp, as he tried to process Ben McAdoo’s offense without the benefit of OTAs or minicamp. He’s looked more comfortable this week, and it’s shown in his performance. During Tuesday’s practice, Mayfield uncorked a 55-yard bomb to Robby Anderson, who made a nice catch of what he called a “beautiful throw.”

Darnold has looked sharp for much of camp, and has not flinched in his first competition since his early days at USC. I just have a hard time believing the Panthers, after looking under every quarterback rock for an upgrade during the offseason, are going to roll Darnold out as the starter in Week 1 – against Mayfield’s former Cleveland Browns team, at that.

The left tackle battle is an interesting one that pits Ekwonu, best known for his run blocking in college, against Christensen, deemed by Rhule and general manager Scott Fitterer last year to lack the ideal arm length to be an effective NFL left tackle.

But Christensen seemed to change their thinking with an impressive audition at the blindside spot late in his rookie season, and has looked like the more polished pass blocker in the early going of camp.

It was just a quick snapshot from the second week of camp. But there’s going to be a learning curve for the 6-foot-4, 320-pound Ekwonu as he transitions from the ACC to the NFL.

“If you’re in college football, it’s a little different. A couple runs, you can overpower guys at (that) level. It’s hard to overpower guys (in the NFL),” Rhule said. “You have to have great technique. You have to be able to block the different fronts that we see.”

Taylor Moton, the Panthers’ right tackle, arrived in the NFL in 2017 as a second-round pick from Western Michigan, where he was “big and strong enough to know I could muscle guys” in the Mid-American Conference. Moton had to learn the finer points of the position while playing only sparingly as a rookie.

Ekwonu, whom some draft analysts thought might be the top overall pick, has the skill set and nastiness to become the Panthers’ franchise left tackle. Now it’s about the nuances.

“I’ve seen him take tremendous strides from where he was at the start of OTAs — when it comes to pass set and the little nuances of it,” Moton said. “He’s become even more of a mauler in the run game, and just continuing to take his game to the next level.”

How long that process takes remains to be seen. Rhule said the team’s scouts, coaches and personnel officials will meet for the first time on Thursday. The first preseason game is still more than a week away.

Christensen’s versatility gives the Panthers the ability to kick the former BYU All-American inside to left guard, where returning starter Michael Jordan has been getting the first-team snaps.

Rhule and Fitterer have talked about finding the best five guys up front, and it seems like a matter of time before Bozeman, the former Baltimore Raven, supplants Pat Elflein as the No. 1 center.

Ekwonu was among the top three-rated tackles in the draft, going one spot ahead of Alabama’s Evan Neal and three picks before Mississippi State’s Charles Cross. Neal has been the New York Giants’ first-team right tackle at camp, while Cross has been Seattle’s starting left tackle since the first snap of Seahawks camp.

The Panthers can’t be the team that drafts their future left tackle, and then puts that future on hold. And the strong hunch here is they won’t be.

“We’ve got good players on the offensive line. So we’re not just gonna hand him anything,” Rhule said. “He’s going to go earn it. And knowing Ickey, I think that’s probably the way he likes it.”

The Surprising History of the Slur Beyoncé and Lizzo Both Cut From Their New Albums Ben Zimmer Aug 03, 2022 6:04 PM