SPARTANBURG, S.C. — The Panthers will stage an intrasquad scrimmage early Saturday morning at Wofford, where defensive players — at least in theory — will not take their offensive counterparts to the ground.

If head coach Matt Rhule runs it like the previous eight training camp practices, quarterbacks Baker Mayfield and Sam Darnold will split reps as the Panthers continue to play the long game on deciding on a starter.

There are bigger preseason tests coming up that will reveal more about who fits where on the depth chart, beginning with the exhibition opener at Washington and followed a few days later by joint practices with Bill Belichick’s Patriots in New England.

But through the first two weeks in Spartanburg, some players have asserted themselves and some trends have emerged — good and bad. The Athletic looks at nine risers and fallers as the Panthers prepare to break camp Wednesday.

The question I get more than any other besides the quarterback competition is: how’s McCaffrey look? Run CMC always looks like he’s in incredible shape, but that hasn’t prevented the rash of injuries the past two seasons, nearly none of which were preventable. Rhule has said McCaffrey won’t practice more than two days in a row in full pads, although McCaffrey isn’t exactly kicking back in his “bougie-est” dorm room on those off days.

Rhule has indicated McCaffrey won’t play in the exhibitions, and there’s a plan to be smarter with McCaffrey during the regular season. But it does not include bubble-wrapping the team’s best weapon.

“Christian’s a dominant football player. He plays a high-contact, high-percent-of-injury position. We’re going to put him out there and play him,” Rhule said. “I think we’re all thinking about Christian one way only, and that’s attack.”

Christensen, the second-year offensive lineman from BYU, is ahead of rookie left tackle Ickey Ekwonu as far as pass blocking. As he did Wednesday, Christensen stoned Pro Bowl edge rusher Brian Burns on a one-on-one pass rush drill Friday, after which Burns praised Christensen for making “tremendous strides” with his pass blocking.

There’s no denying Ekwonu’s physicality and mentality, which Burns called “that dog.” But edge rushers like Burns and Marquis Haynes have been getting him off-balance with a variety of moves. Like any rookie, it will be a process for the No. 6 pick.

With right guard Austin Corbett unavailable (ingrown toenail), the Panthers shuffled their line Friday, when Christensen (at guard) lined up alongside Ekwonu on the left side. Rhule should use that lineup more often to expedite Ekwonu’s learning curve.

The Panthers’ cornerbacks have received a lot of media attention, from Jaycee Horn’s foot to C.J. Henderson’s development. But free agent acquisition Xavier Woods has made a seamless transition at safety alongside Jeremy Chinn, despite missing most of OTAs and minicamp tending to a family matter.

Woods, who played with the Vikings last season, isn’t the biggest (5-11, 204) or fastest member of the secondary. But the former Louisiana Tech defensive back communicates well and seems to have a knack for finding the ball. Rhule is making other newcomers earn their spots on the first team, but Woods has been a starter since Day 1.

“He has so much knowledge of the game, so I can ask him things. He helps me out with a lot,” Chinn said. “Having him next to me I feel like is just a bonus out there.”

The long snapper battle barely lasted into August. The Panthers waived Thomas Fletcher on Thursday in favor of Jansen, the 36-year-old who has been the team’s deep snapper since 2009. Jansen has been the model of consistency: His last bad snap was against the Giants in the 2010 season opener.

Given Jansen’s history and with the quick hook used on Fletcher, the decision to use a sixth-round pick on Fletcher in 2021 looks even worse a year later.

“I think Fletch is gonna play a long time in this league,” Rhule said. “Felt like it was the right time for him, to enable him to go find another team.”

But give credit to Jansen, who needs 13 games to pass John Kasay for the most in franchise history. “I think J.J.’s done a tremendous job,” Rhule said, “and we feel like, hey, that gives us the best chance to win moving forward.”

When Saunders shined during last year’s training camp as an undrafted free agent, most wrote him off an undersized wide receiver making the most of his reps in noncontact drills against second- and third-teamers. Well, Saunders is doing it again, this time often against the starting secondary.

It’s clear that Saunders, generously listed at 5-10 and 190 pounds, has earned the trust of Mayfield, Darnold and every other quarterback with his ability to get open and make catches. The former Ohio State wideout had one of the plays of the day Friday with a diving snag of a Darnold pass in the end zone.

Saunders spent most of last season on the practice squad before playing in two of the final three games (he had two catches for 11 yards in Week 18 at Tampa Bay). But he’s building a strong case to make the roster out of camp this year.

It’s way too early to sound the alarms, but Horn’s slow return from a foot injury 11 months ago is at least a bit disconcerting. Horn has yet to participate in team drills after returning from the physically unable to perform list, and now the second-year corner is not scheduled to participate at all for several days.

Horn was not in uniform Friday after Thursday’s walkthrough, and Rhule indicated he’d be off until early next week. Rhule said the decision to rest the No. 8 pick in the 2021 draft had more to do with the training staff’s plan than a setback.

“I don’t want to get into all they’re doing. But they’ve taken some things and said, ‘Hey, give him a couple days,’” Rhule said. “I think we all feel really good about where it’s headed.”

Horn missed the final 14 games last year when he broke three bones in his right foot while backpedaling in a Thursday night game at Houston. He participated in OTAs and minicamp, but reported soreness after the conditioning test at Wofford.

“When you come back off a broken foot, you’re gonna deal with some soreness. … If you talk to anyone with a broken foot, they’re gonna tell you that’s what they generally deal with,” he said. “So I wasn’t too concerned. I was just taking the advice of the training staff and taking it slow.” 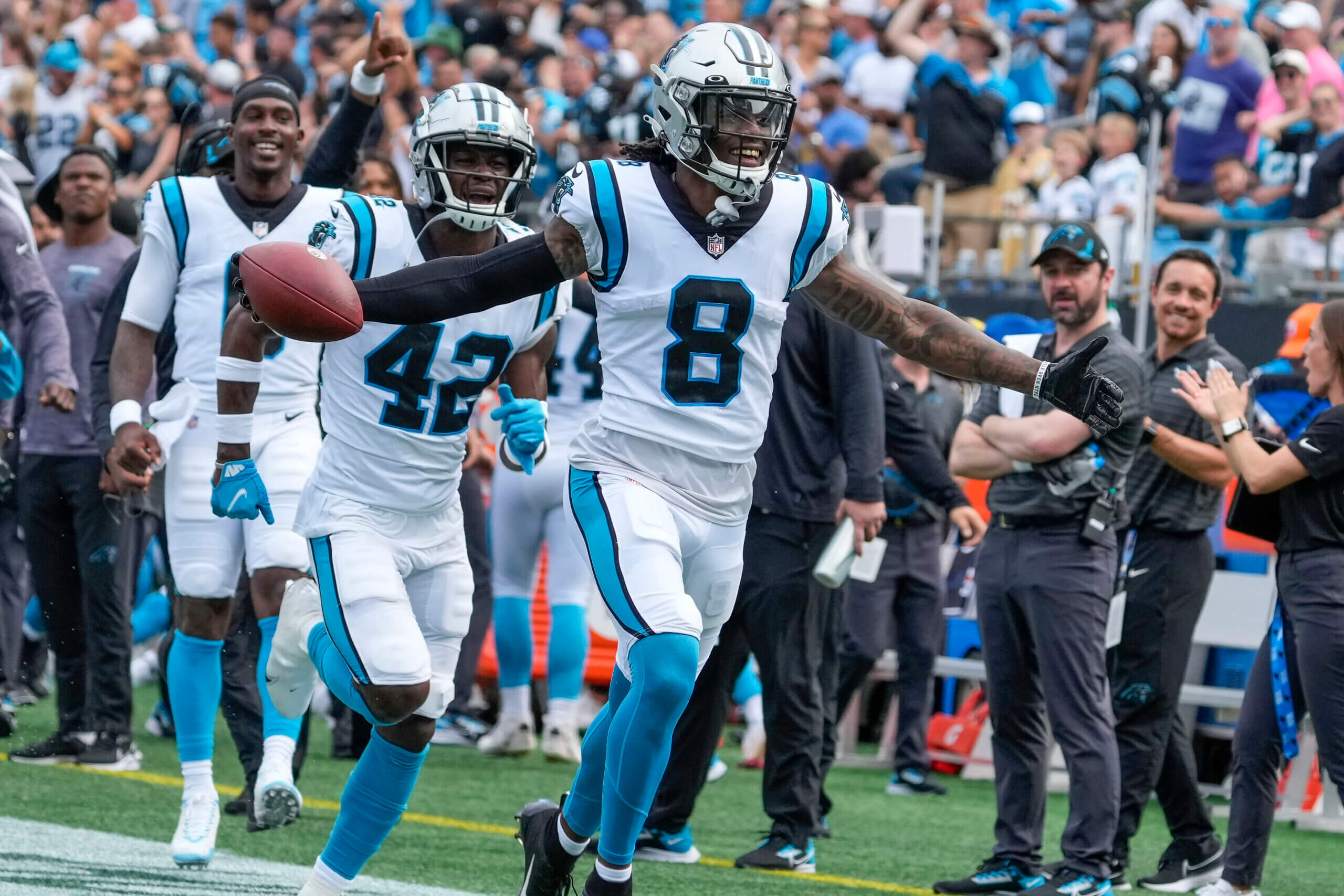 Jaycee Horn played in just three games as a rookie because of his foot injury. (Jim Dedmon / USA Today)

Horn isn’t the only corner on the shelf. Keith Taylor, who’s expected to be part of the rotation, will miss a week or two with a hamstring issue. Duke Dawson, who just signed last week, is also out with an undisclosed injury.

The wave of injuries has forced general manager Scott Fitterer to bring in several corners — former Appalachian State player Tae Hayes most recently — and created a numbers crunch that led to Fletcher being waived.

The former Alabama standout is the Panthers’ biggest offensive lineman at 6-4 and 335 pounds. But the sixth-round pick from 2021 has been a nonfactor at camp, and it’s hard to see a path for him making the team.

When the Panthers bolstered their line during the offseason with the additions of Corbett, Ekwonu and Bradley Bozeman, it meant some starters from last season would be reserves this year. That trickle-down effect is going to push some other linemen off the roster completely, and Brown looks like he’ll be one of them.

There’s no longer a DBO (Don’t Beat Ourselves) sign at Wofford. But some position groups still face punitive measures after messing up. For running backs who fumble, that’s a penalty lap around the field holding footballs in both hands — an all-too common sight over the first two weeks. And that doesn’t count the passes that reserve backs like Chuba Hubbard and Spencer Brown have dropped.

That said, the Panthers’ running backs group looks better with the addition of D’Onta Foreman, a bruiser at 6-1 and 236 pounds who won’t be asked to do much in the passing game. And Hubbard has made a big leap in his pass blocking in his second season, according to Rhule, who said he’ll be more comfortable using Hubbard in third-down situations.

But with the Panthers making ball security a big point of emphasis, some of the backs not named McCaffrey need to clean it up.

In Australia birth trauma happens with or without a medical emergency