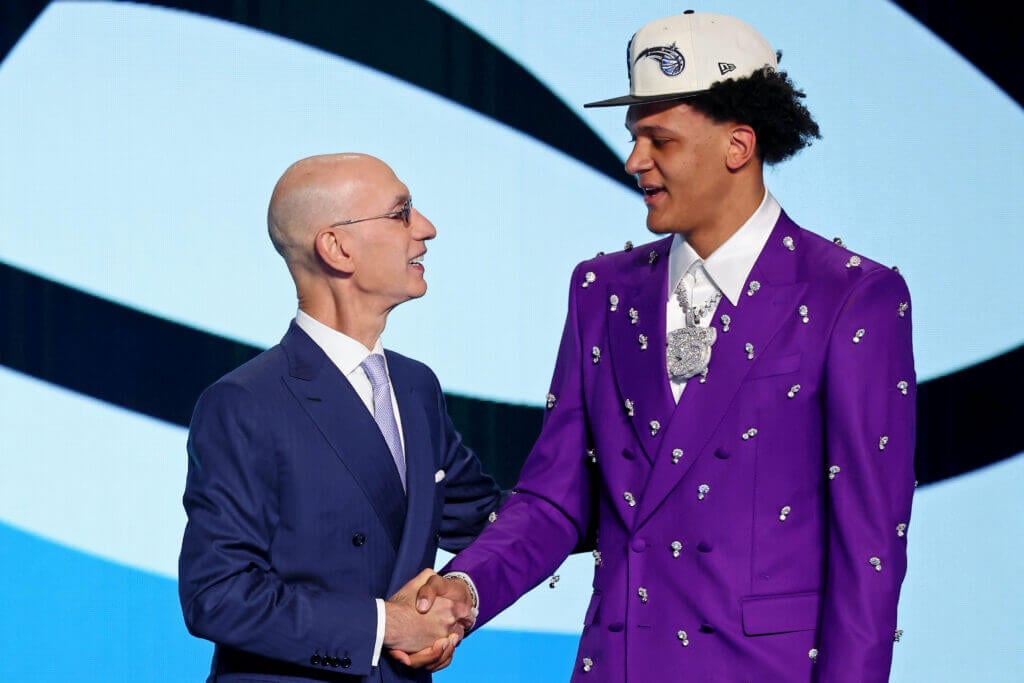 NEW YORK — Paolo Banchero always thought throughout the pre-draft process there was a chance he could go No. 1, but he was also realistic. He had kept in touch with the Orlando Magic, but he never worked out for them. He saw the reports saying the Magic were leaning toward Jabari Smith Jr., and he adjusted accordingly. But he never gave up on the idea altogether.

On Thursday, he started to see some signs that maybe the Magic’s decision-makers were tilting his way. Two of his best friends told him about something that made him reconsider his future a little bit.

“They showed me, I think, some betting odds that changed, and I was like, ‘Wow, it was a big change,’” Banchero told The Athletic. “So I was kind of like, ‘OK.’ I was just like, ‘Man, let’s see where it goes.’”

The sportsbooks changed their odds overnight and early Thursday, violently swinging from Smith to Banchero as the favorite to go No. 1 before shifting back to Smith. It seemed inexplicable. Yet, as the draft got closer and closer, he heard more reassurance from his agent, Mike Miller. Be ready, Miller told him. By then, he realized there was a strong chance he could be headed to Orlando.

The most surprising top pick in recent NBA Draft history said he didn’t find out he would go No. 1 until roughly 20 seconds before NBA commissioner Adam Silver announced it from the podium, when Miller told him just ahead of Silver. It was the beginning of a frantic conclusion to the build-up to the draft and the start of a surprising night.

Banchero was its star. After weeks of speculation that Smith would go No. 1 and Banchero was likely headed to Houston two picks later, he leaped up to the top. It was a valedictory moment for the Duke product, who impressed in his one year in college, flashed spectacular playmaking skills at 6-foot-10 and took the program to the Final Four.

As he took in the moment, walking through the hallways of the Barclays Center, Banchero was riding a wave of emotions, mostly elation. He cried when he was drafted after promising himself he wouldn’t and couldn’t hide his astonishment and glee.

“This isn’t even a dream,” Banchero said. “I feel like this is a fantasy. I dreamed of being in the NBA, but being the No. 1 overall pick, this is crazy.”

Banchero, a forward with a live handle, good vision and a threatening jumper, will be the biggest addition yet to the Magic rebuild. They took Jalen Suggs fifth in the 2021 draft and Franz Wagner eighth. Cole Anthony averaged 16.9 points and 5.7 assists per game last season, leading a backcourt with Markelle Fultz, while Wendell Carter and Jonathan Isaac are part of the frontcourt.

Banchero has done his homework on the roster. He noted that the Magic can throw out three players all 6-9 or bigger next season who can all shoot and create a little offensively. And Banchero believes he’ll fit in well on that kind of team and could help bring them back to the playoffs.

He also knows the Magic’s history with first-round picks. He is the fourth No. 1 pick in the franchise’s history, after it took Shaquille O’Neal in 1992, then Chris Webber in 1993 (and traded him for Penny Hardaway) and Dwight Howard in 2004.  Each time the Magic have had a top pick who suited up for the team, they’ve made the NBA Finals within five years of the selection.

“Three Hall of Famers,” he said. “I look forward to helping the Magic get back on that stage. The guys that are there already are a great group of guys, and I just want to come in and fit right in and be a big piece of what they got going on.”

Orlando surely took Banchero for his mix of pedigree and skill. He was the second-ranked player in the 2021 high school class and then averaged 17.2 points and 3.8 assists as a freshman at Duke. He was the Blue Devils’ top player and wowed in the NCAA Tournament. He scored with 22 points against Texas Tech, the top defense in college basketball, in the Sweet 16, then had 20 and 10 in a Final Four loss to North Carolina.

The Magic must hope he can be the one to resurrect the franchise, which has had eight losing seasons in its last 10. It has had numerous lottery picks in that time but hadn’t found a pillar it could build around as a frontline star.

Banchero believes he can be that kind of player.

“My ceiling is as high as I want it to be,” he said. “Which is limitless. I set a lot of goals for myself every stage of my career. So I want to do all that — Rookie of the Year, be an All-Star, make the playoffs, everything a basketball player on this stage would want to do, I want to do, plus more. But at first, I want to win. That’s the most important thing.”

The Magic did not bring in Banchero for a workout, which seemed to imply he would not be their choice atop the draft. But even team president Jeff Weltman admitted earlier this week that the pre-draft process was full of subterfuge. Thursday night, he reiterated that there was some gamesmanship to the draft.

The skullduggery worked and threw most off the scent. But Banchero said he actually had a lot of conversations with the Magic after they won the lottery May 17. He interviewed with them at the draft combine and talked to them over the last few weeks. He had several calls and Zoom sessions with the front office. His agent Miller, who was a Magic lottery pick in 2000, was in “close contact” with Orlando.

Banchero never gave up on being the top pick. Neither did the Magic.

He thought he could still go to Orlando. The Magic just kept it quiet.

“I always thought there was a chance I can go No. 1,” Banchero said. “I just didn’t know if it was for sure or not. All the reports and stuff were mostly saying that I wasn’t, so I kind of was leaning towards that. But I also was in the back of my head keeping it there.”

Thursday, he led off an event that finally had a draft-night reveal. Afterward, he soaked it all in. He wore a Husky purple suit to honor his parents, who went to Washington, but he eschewed the school to go down his own path.

The suit was his own design. He wanted to show love for his parents during his biggest moment. Banchero also tailored it with dozens of replica diamond rings dotting his 6-10 frame. From afar, it looks as if he was wearing championship rings all over his body; the Magic would be happy if he brought them a real one too.

Herbie Hancock: ‘Miles Davis told me: I don’t pay you to get applause’