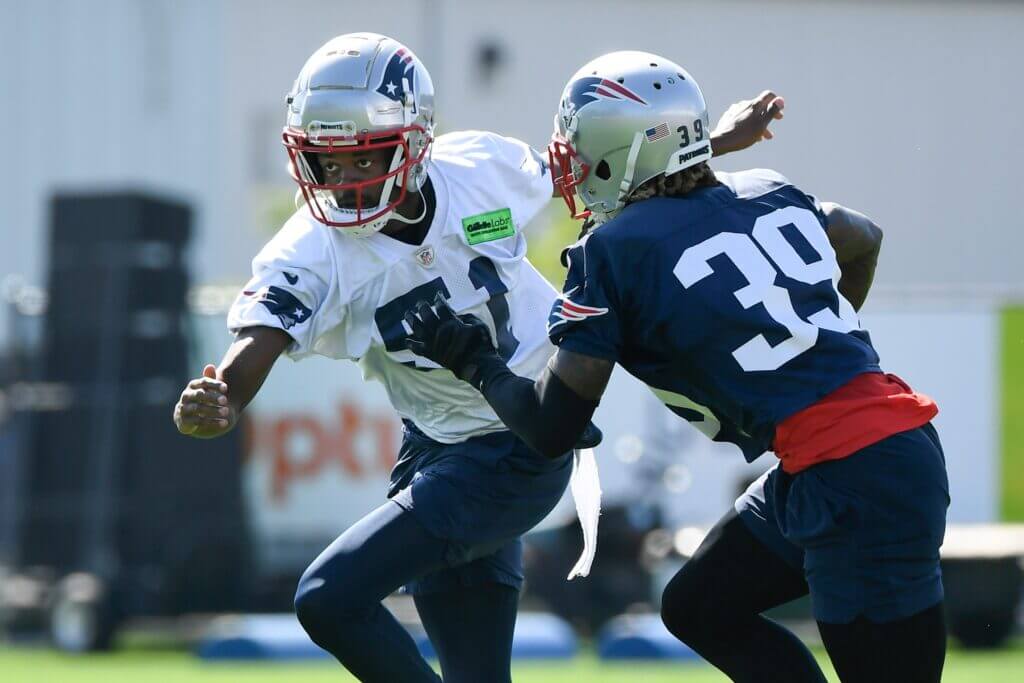 FOXBORO, Mass. — Troy Brown is the Patriots’ wide receivers/kickoff returners coach, which means he’s management. But to younger players in training camp, Brown is a sort of Ghost of Christmases Past who knows a thing or two about playing postseason games and, ahem, winning the Super Bowl.

Talk about having a Hefty bag-sized postseason resume: Brown, a mostly receiver who did a whole lot of other stuff over the years, appeared in 20 career playoff games for the Patriots and has three Super Bowl rings socked away. So, yes, absolutely, here’s a guy who can play back-in-the-day with the best of them.

Except that “back in the day” doesn’t extend beyond the most recent sunset when you work for the Patriots. And while “Yesterday” is a fine song if you’re a Beatles fan, the word barely exists down Foxboro way. And yet here we have Tyquan Thornton, rookie wide receiver, who knows so much about Brown that you’d think the two had adjoining lockers when the Patriots played in Super Bowls XXXVI, XXXVIII and XXXIX.

Except that Thornton, who turns 22 on Sunday, was only about 18 months old when Brown caught six passes for 89 yards in New England’s 20-17 victory over the St. Louis Rams in Super Bowl XXXVI on Feb. 3, 2002.

And yet, to ask Thornton about Brown is to come away believing the kid is studying more than the playbook. He’s been studying Brown as well. Asked Thursday morning what he’s learning from his coach — in other words, what can Brown do for him? — Thornton replied, “Aww, man, it’s motivation. Being coached up by him and then going to YouTube and seeing the film, he used to put fear in guys’ hearts.”

Picture Thornton, a second-round pick (No. 50) out of Baylor, putting aside his playbook at night and wandering over to YouTube and plugging “Troy Brown” and “Patriots” into the search bar.

I tried it myself, and the first hit I got was Brown’s 55-yard punt return for a touchdown in the Patriots’ 24-17 victory over the Pittsburgh Steelers in the 2001 AFC Championship Game. The game was scoreless at the time, under four minutes remaining in the first quarter, but Brown pulled in the punt at the New England 45, did a little stutter step near the 50 and then basically rode an express train straight to the end zone.

Returns a punt 55 yards for a TD and is part of blocked FG returned for a TD along with Antwan Harris, as the Pats beat the Steelers (24-17) in Pittsburgh in the AFC Championship game

On to the Super Bowlpic.twitter.com/gffW4o1iUb

If you’re a Pats fan who watched that play in real time, you were most likely thinking: Holy moly, the Pats might be going to the Super Bowl.

If you watched it again just now, maybe you’re getting all nostalgic and teary-eyed.

OK … we ask now that you again consider what Thornton must have been thinking when he saw that video, and others like it. You’re a freshly-minted NFL player, a rookie, a kid trying to make an impression … and your positional coach is a guy who not only played the position, but played it on football’s biggest stage. Three times. (Brown was also part of the 1996 Patriots that reached the Super Bowl, but he played sparingly in the playoffs before being inactive in the title game.)

“He’s a dawg, he’s a dawg,” Thornton said. “He’s probably the only person I know that played the wideout position, the star (slot corner) position, and going on defense and blocking punts and doing that. That’s the true definition of dawg.”

Does Thornton get a daily earful from Brown about the glory days? (You already know what the answer is going to be, but we asked anyway.)

“We try not to dwell on the past too much,” said Thornton, who clearly has studied up on his Belichickian ABCs about what to say, but mostly about what not to say, to the media.

“But the films speak for themselves,” said Thornton, referring to his Troy Brown YouTube searches. “You can walk around the building and see pictures of Coach Brown. His history speaks for itself.”

And that, right there, is an example of how a professional sports team can sell its storied legacy without beating you over the head with it. Bill Belichick — or in this case, Troy Brown — doesn’t need to tell stories about old Super Bowl victories. Their very presence should be enough to inspire those younger players who are bright and inquisitive — and clearly this applies to Thornton — to find out for themselves what all the fuss is about with the Patriots.

It doesn’t hurt that Thornton is the type of young player whose play in training camp suggests he could be a big part of New England’s future. He’s received attention because he’s played well, showing an understanding that it’s not all about speed in the NFL. It’s also about getting around people, and he’s done that.

When it comes to Brown teaching aggressiveness, Thornton said, “He tells us every day and he reminds us. Us, as receivers, we have that mindset going on the field every day, that we’re gonna dominate.”

Thornton talks a good game. He also talks a fast game. How fast does he talk? We’ll put it his way: If he can get around defenders and get himself open with the same speed with which he can talk, this is one draft pick that’ll go into the “way to go” category for Belichick.

“I put a lot of pride into it,” Thornton said. “Coming out every day, working on my releases … using my hands at the line, trying to be more aggressive …”

And on it went like that. And people are noticing: Pats fans were holding up Tyquan Thornton signs at training camp Thursday morning.

They used to do that with Troy Brown as well. Check out the YouTube videos and you might see some of them in the background.

Other notes from Thursday

• Belichick, never known for being warm and fuzzy during his news conferences, went out of his way Thursday morning to answer questions posed by 14-year-old Isaac Lebowitz of NBC’s “Nightly News: Kids Edition.”

The coach provided a thoughtful answer when Lebowitz asked about team bonding activities, as well as when he asked him about what he planned to do in celebration of Kendrick Bourne’s birthday.

“We had Henry Anderson yesterday, KB today,” Belichick said. “Yeah, we’ve had a bunch of birthdays. We try to recognize those. Sometimes they slip by — some guys want to be recognized, some players don’t. Some of the older coaches don’t necessarily need that. But yeah, sure. Thank you.”

Belichick wasn’t so forthcoming when Lebowitz asked him about fantasy football.

“Honestly, I don’t really have any opinion on that, because fantasy football doesn’t mean anything to me,” he said. “We’re just trying to win games out here, so I don’t know who’s hot, who’s not, who wins, who doesn’t. I don’t really care about that. I just care about whether we win.”

• Hunter Henry on the oppressive heat on Thursday: “It was nice, man. This is perfect.”

• Jalen Mills on taking reps against newly acquired receiver DeVante Parker: “He’s a savvy guy. For him to be that tall, he can run. Obviously he can jump up and catch the ball, but like (Tyquan) Thornton, he’s the kind of guy who can run those shoes and intermediate routes, and at any time he can take the top off.”