SAN DIEGO — J.T. Realmuto had just finished another round of batting practice, the time of day when he can think about the things that have prevented him from driving the ball in an actual game. He has diagnosed the problem. But it was a helpless feeling because, entering Thursday, there were 100 hitters with at least 250 plate appearances this season and Realmuto ranked 92nd in slugging percentage.

It’s natural to wonder because Realmuto is 31 and a catcher and he catches more innings than anyone else in the sport. When the Phillies signed him to a five-year, $115.5 million contract before last season, they asked him to defy decades of conventional baseball wisdom by aging well as a hitting catcher.

The whispers will always circulate whenever Realmuto scuffles.

“I know what I’m doing wrong,” Realmuto said 90 minutes before Thursday’s 6-2 win against the Padres. “The work is there. We’re putting in a ton of swings every day. I feel great before the game when I can actually think about the mechanical stuff. Then, once I get in the game, it’s just not quite translating yet. I have to think about it for it to happen in a game. And when you start thinking about mechanics in the box, you’ve lost basically. You’re going to start chasing or you don’t see the ball as well.

“I’m just caught in that in-between space right now. But I feel like if we keep putting the work in, these swings are going to pay off in the long run. The power will come.”

He paused, then kept talking.

“I know the power will come back,” Realmuto said. “I hit the ball better right now in BP than I ever have, power-wise. So it’s not lost.”

How does he know that from batting practice?

“I just have more balls flying better off the bat,” Realmuto said. “I’m hitting more homers to center and right-center than I ever have in my career. It’s not that the power’s not in the bat. It’s just not translating to the game because my mechanics aren’t quite there yet.”

Realmuto grabbed his bat and started to walk down the steps of the visiting dugout at Petco Park.

“Maybe tonight,” he said, “I get it turned around.” 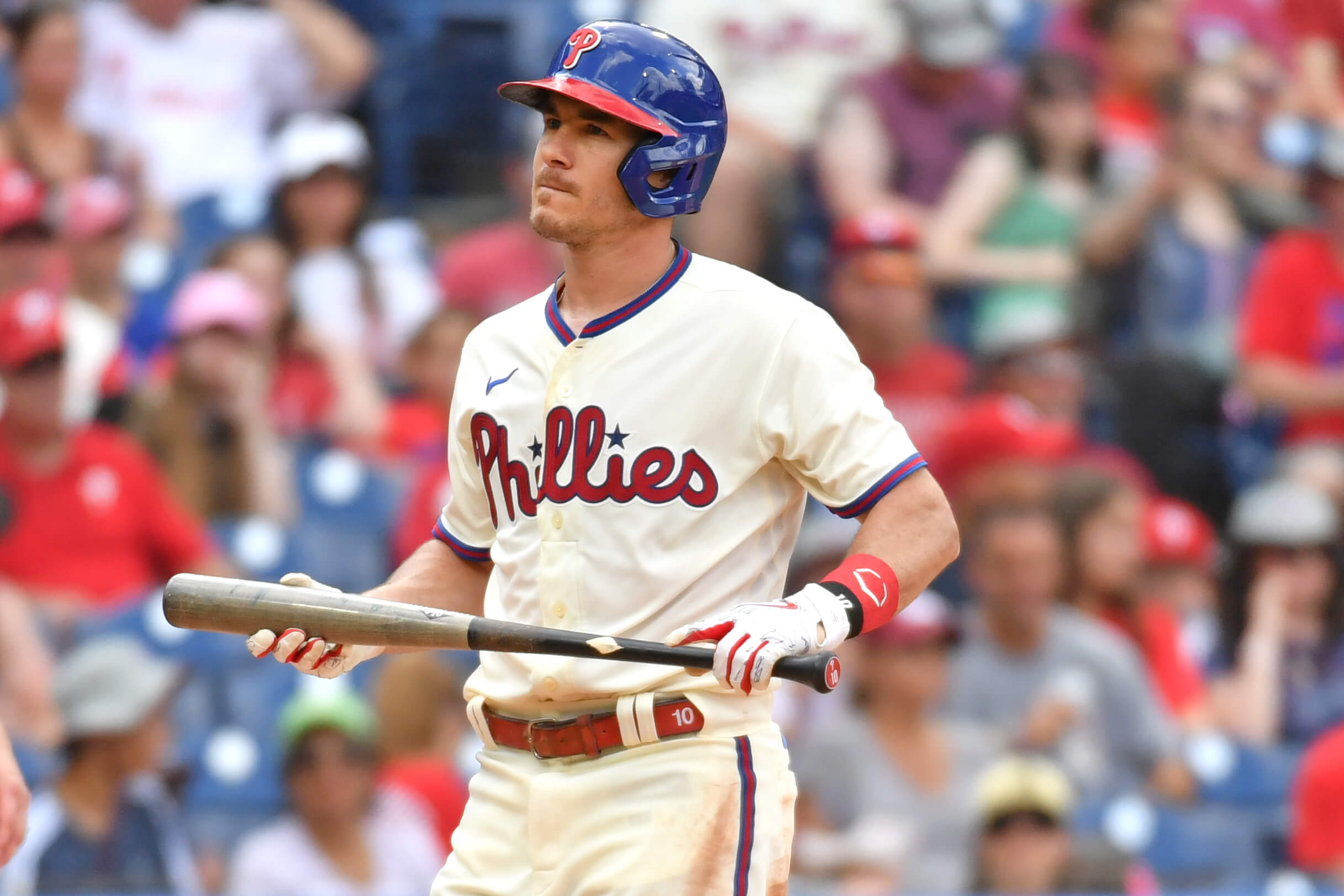 A few hours later, when Realmuto smashed his first home run in 29 days, it didn’t fix everything. He’ll need a string of swings like it to fully transfer the practice swings into game swings. Two innings after his three-run homer to right field, Realmuto hit a weak grounder to shortstop. He carried the bat with him for about 20 feet, then slammed it into the first-base line.

But that sixth-inning swing will stick with him.

“One I saw it hit off the fence and go over,” Realmuto said afterward, “it was a pretty good feeling.”

He just hasn’t made the quality of contact he’s accustomed to making. But this isn’t an issue contained to the 2022 season. Realmuto’s power production dipped last season, especially after a left wrist injury suffered in late April.

“That and the shoulder (injury) are two of the things that could have started my bad mechanics as far as my lower half goes,” Realmuto said. “Because my upper body was taking over a lot and trying to compensate for what I didn’t have. Usually, I can just feel loose with my upper body and let my lower half explode. But when my shoulder’s hurting, I have no extension. I think mechanically I got into some bad places with my lower half. It’s just carried over into this season.” 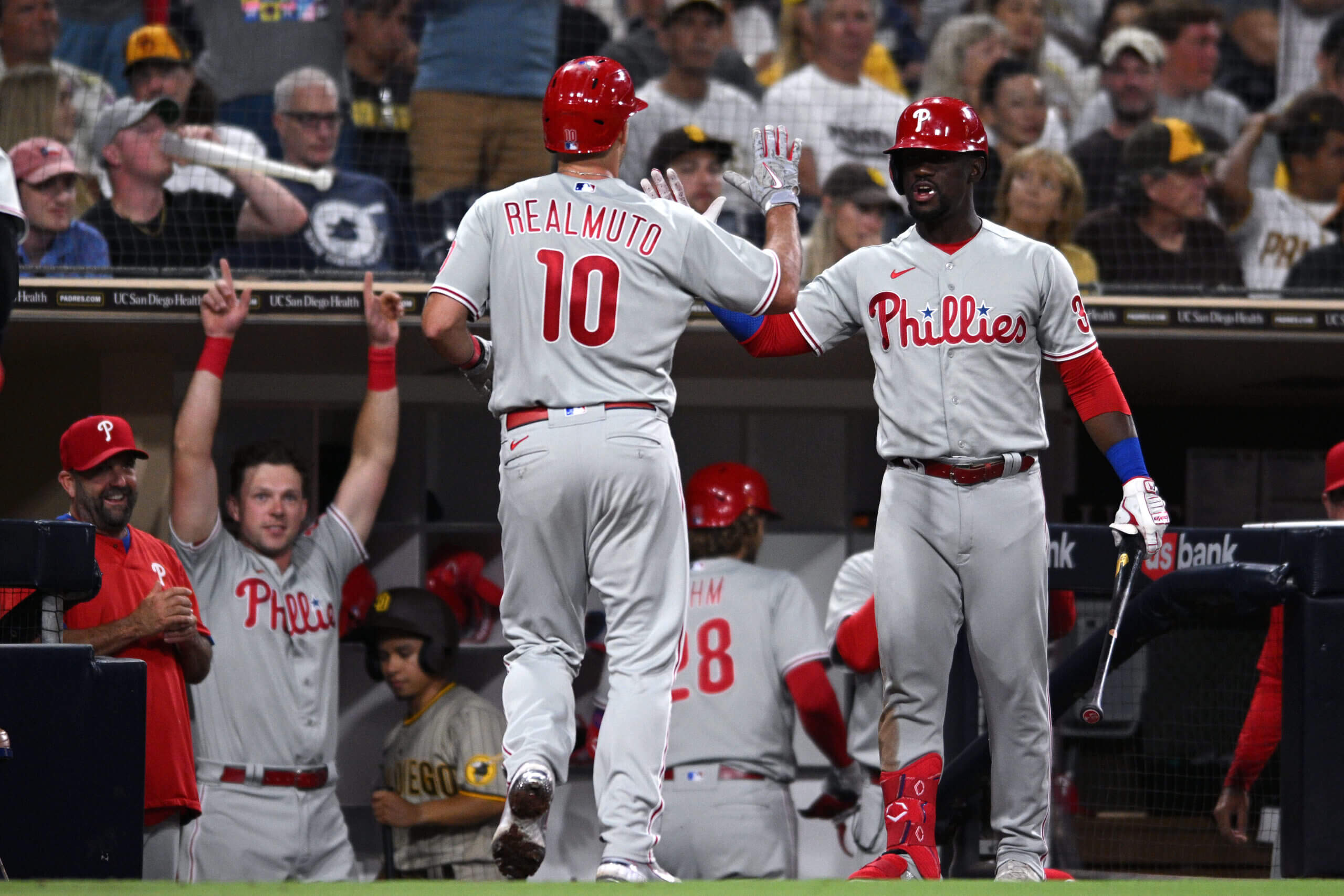 While it’s encouraging for the Phillies that Realmuto and the hitting coaches have diagnosed the problem and worked behind the scenes to correct it, the wear and tear that led to the bad mechanical habits isn’t going to abate. Realmuto plays baseball’s most grueling position, and that has an effect on the body over time. He said he views himself as someone who should have at least 20 homers every season and, if he doesn’t, it’s a result of mechanical flaws. Not a lack of bat speed or strength.

But those are targets that will change with age. For now, it’s too soon to suggest Realmuto is past his offensive peak — especially if adjustments have resulted in tangible improvements during practice. “The stuff I’m doing before the game,” Realmuto said, “if you watch video of that and then watch video of my game swings, it’s just not translating yet.” The best hitters will say that making in-game adjustments — and sticking with them — is among the hardest things about the craft.

Realmuto’s natural gifts haven’t disappeared. If the adjustments stick, the tools are there.

It’s 29 days without a homer that Realmuto will want to forget. “It definitely felt like it was a long time,” he said. Maybe there is something to come from it.

Liverpool and Manchester United heading for Bangkok – at a big cost